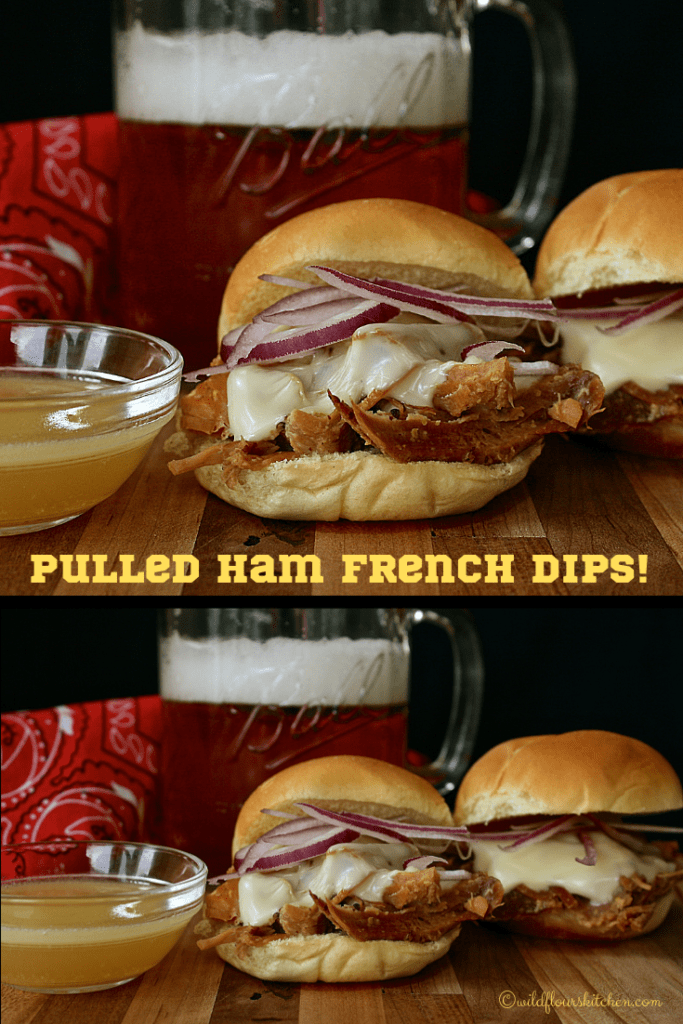 French Dips are one of our favorites, but have you ever had one made of tender, juicy ham that’s been braised in beer and creole mustard until fall-apart tender? If not, now’s your chance! I topped ours with creamy, melty, white American cheese, mild red onions, and served them with my own rich and buttery ham au jus! SO. STINKIN’. GOOD!

I recently made us some Creole Mustard Beer-Braised Pulled Ham Sliders that were so good, I decided to do a variation that led to these!

To recap what I created this recipe from, you simply place chunks of ham into a slow cooker/crock pot with beer, ham bouillon base, creole mustard, and butter. 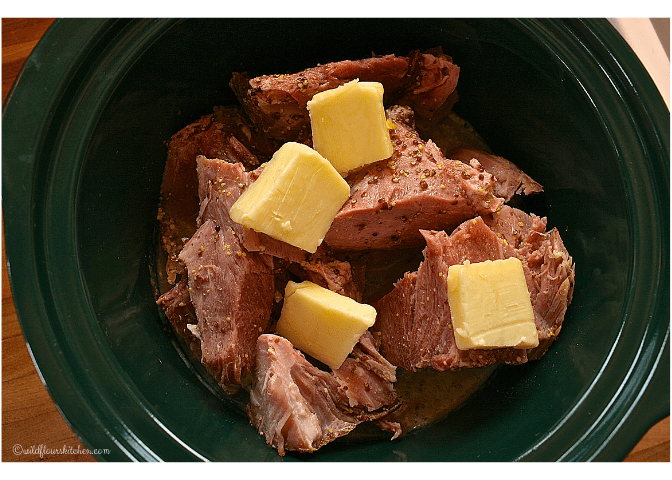 After cooking, the ham will be all apart tender, and easily pulled with 2 forks! 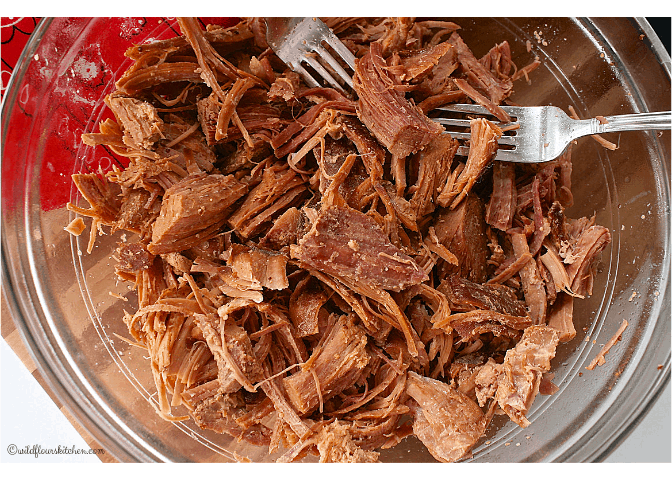 So, for these, since I have a rather small appetite, instead of making huge french dips on hoagie rolls, I made mini ones on slider buns instead!

And that worked out REALLY well. They’re easy to manage, and those with hungrier appetites can then have as many as they’d like!

They’re also easy for kids to manage, too! (And BTW, if serving to kids, and you don’t want to use beer, you can always substitute chicken broth.)

Once the meat is tender and pulled, (into small chunks or shredded), pile the meat onto the warmed, soft, bottom rolls. 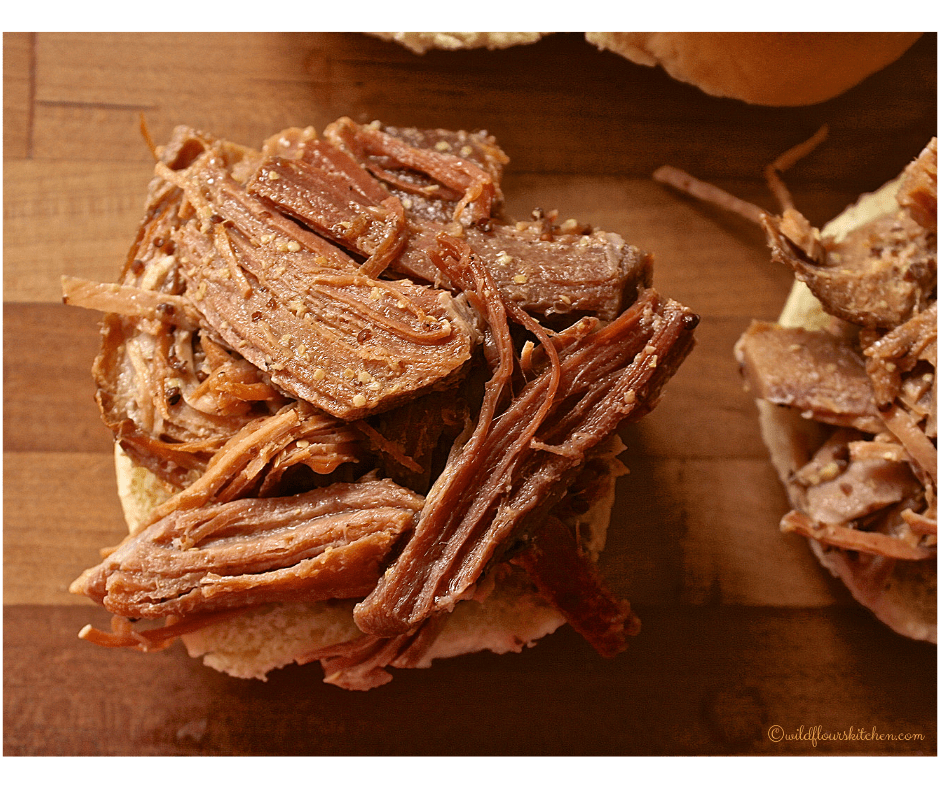 Then top with any cheese that you like! I used white American cheese slices, but swiss or gouda, provolone, muenster, havarti, or monterey jack would also be fantastic! 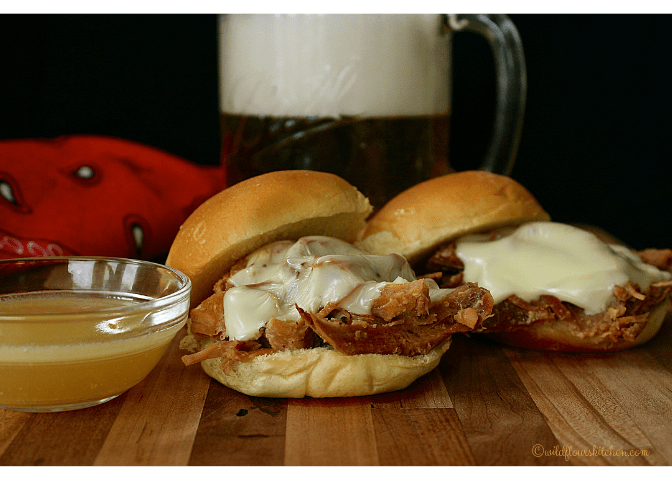 You can then pop them into the microwave, or give them a quick trip under the broiler to melt the cheese. 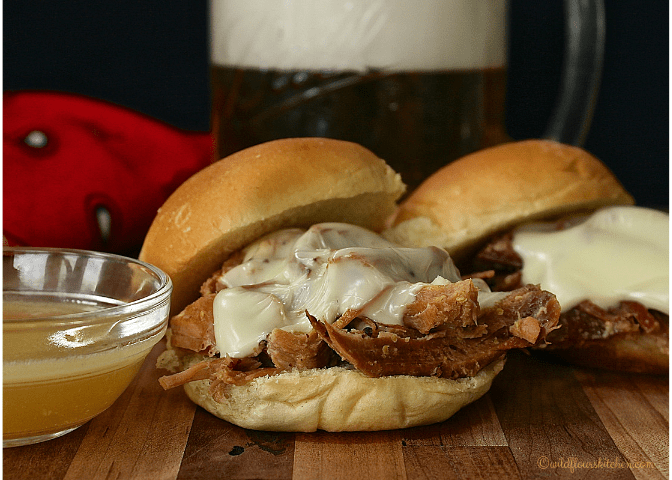 You could, of course, stop right there and serve them as is, but they weren’t nearly as good without some very thinly sliced red onion! 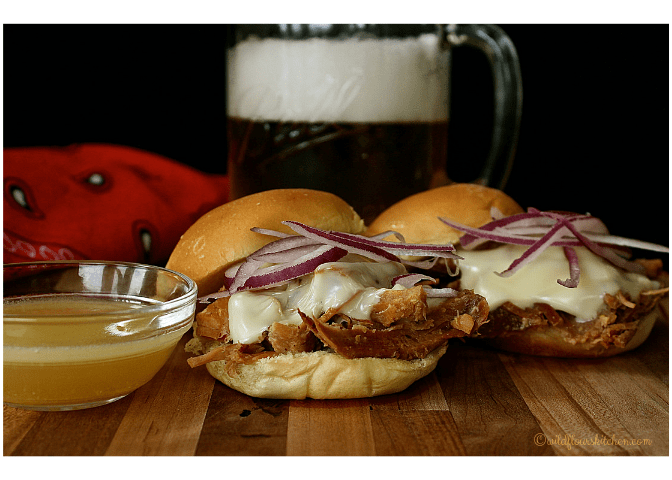 I think they really needed that bit of a bite and light crunch!

Normally, I always like to toast my buns, but I’m glad that I didn’t for these. The juices seeped into the buns and it was SO GOOD that way!!! 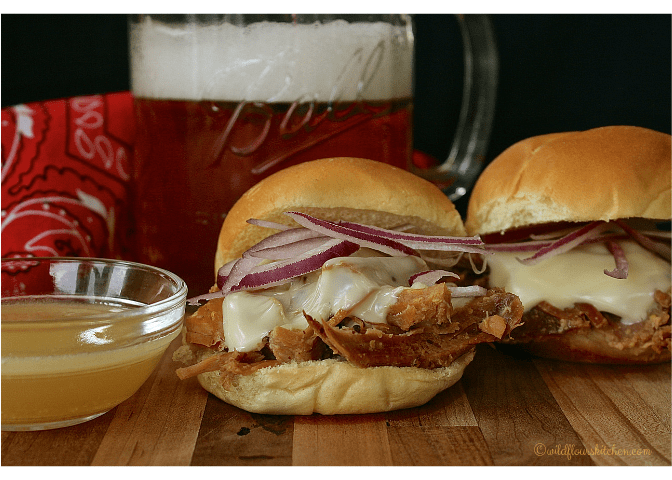 And speaking of “juices”, I also made my own little bowls of ham au jus for dipping and dunking to go along with, too!!

And that stuff not only took them over the top, but, I swear, you could DRINK that stuff!!! Rich and buttery, and full of ham flavor!!

Different from any french dip you’ve ever had, these Pulled Ham and Cheese French Dip Sliders with Au Jus will be a surprise delight and the hit of the party!

Tender, juicy, chunks of ham all piled onto soft rolls and topped with melty cheese and onions…with au jus to dip in? What’s not to love??!!

Hope you all enjoy!!

With tongs, pile meat onto soft, warmed hoagie rolls or slider buns. Top with onions of desired, raw or sautéed. Top with American cheese slices. Warm in microwave or run under broiler just until cheese has melted. Place top buns on and serve with hot au jus for dipping and dunking. And enjoy!!