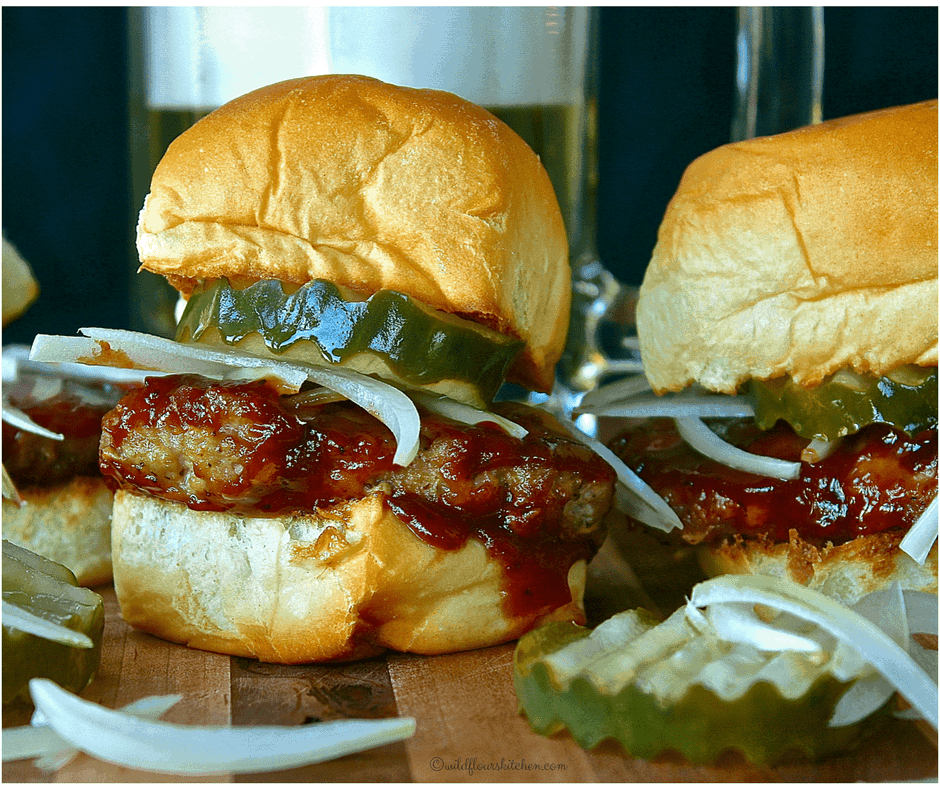 My hubby was smilin’ like he was eatin’ a banana sideways when he saw these! And I’m sure that you, your family, and friends are going to go bananas over these, too!

Just looking at them makes my mouth water! How about you?!! Gettin’ hungry? 😀

(*This photo is Pinterest-friendly
if you’d like to save this one to one of your recipe boards!)
Always appreciated! 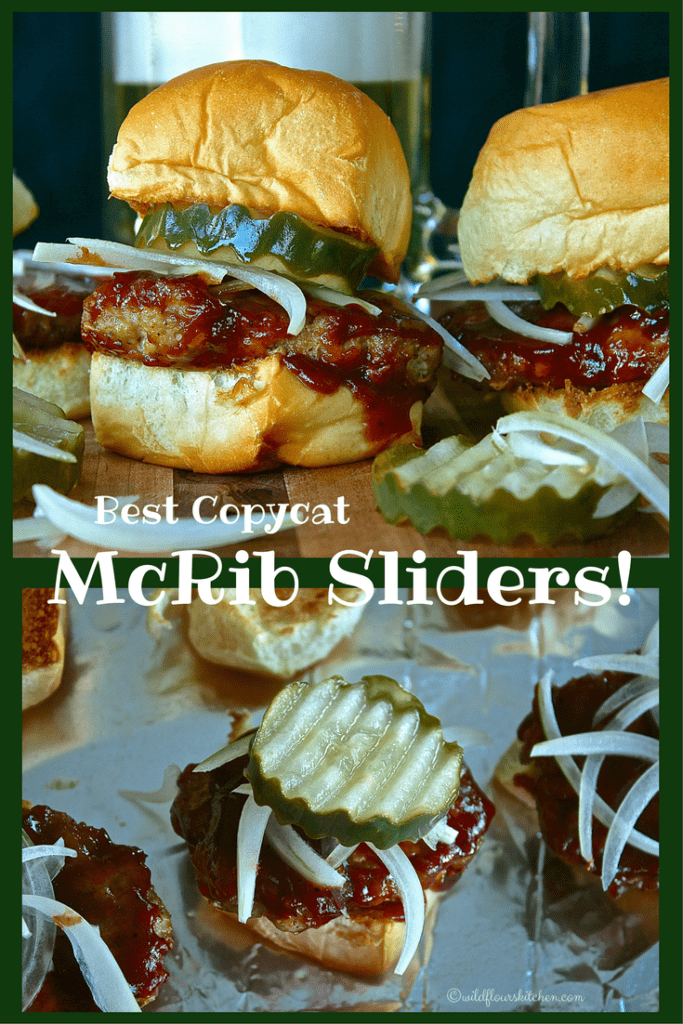 McDonald’s McRib sandwiches used to be one of his favorite fast-food indulgences… Now he won’t touch them after I made him a real-deal, no faux about it, Copycat McRib from real ribs!

(*My own version of the original), “The Ultimate Homemade McRib Sandwich“! 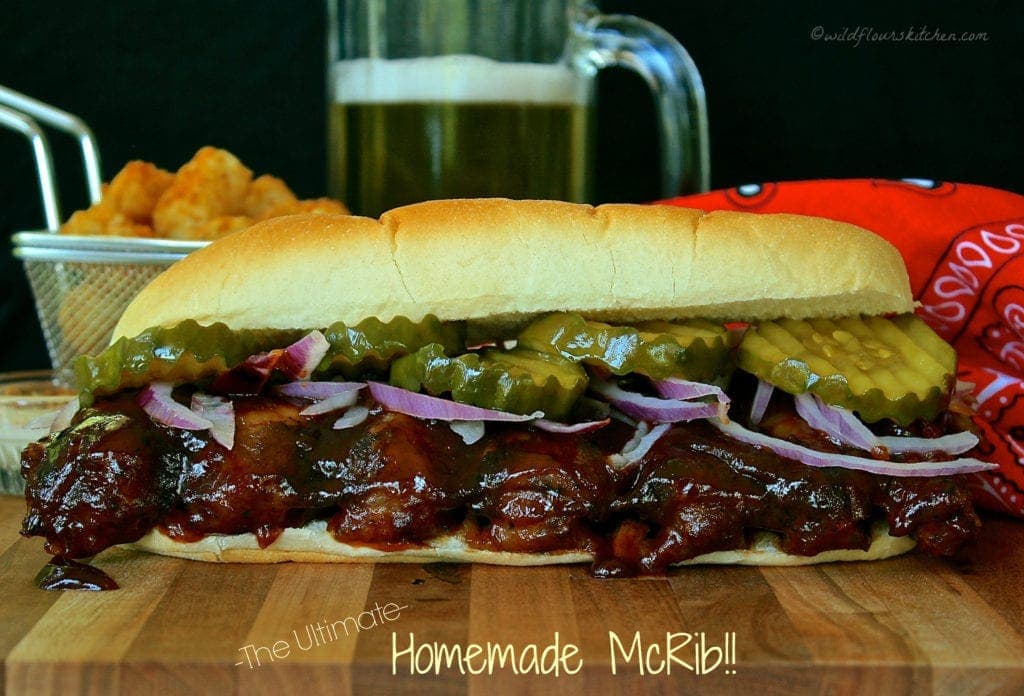 And ever since then, he swore off ever craving the purchased ones again! Which has been a win-win for us both! I’ve never been a big fan of fast-food. And now, thankfully, my hubby isn’t either!

But making racks of ribs isn’t always ideal. So when that craving for a McRib-style sandwich came along, I wanted to create something much more simple and convenient.

For not just us, but for everyone who just happens to enjoy that ever-popular, yet elusive to find, “faux rib” sandwich. So I thought to have some extra fun and create some easy sliders, that mimicked one of the hub’s favorites, without too much fuss or expensive ingredients.

Though these are sans all of the bazillion fillers and chemicals in today’s fast-food, I’m certainly not saying that these sliders are “hippy health food”, either.

But one or two of these micro sandwiches won’t kill you. Let’s not be dramatic. And there’s no harm in enjoying life and eating the cake once in awhile, either.

And they’re sure as hell not as bad as the “chemical shitstorm” from the drive-thru. YOU control what’s in them. Besides, pork is the “other white meat”, and sliders in general are so small that with a side dish, ONE is enough for me!

My hubby is a “good eater”, and even he was satisfied and more than full with only just two of these, along with some oven-roasted potato wedges! Life is WAY too short to sweat the small stuff. So just enjoy everything that life has to offer and don’t make things more complicated than they need to be for yourself. 😉

So let’s just enjoy and make these! Sound good?

So. I started with 1 1/2 pounds of regular ole ground pork. (*Not to be confused with “sausage”. Ground pork is made from pork loin, just like the lean, “other white meat”, pork loin roasts and chops that you regularly buy!) Nothing weird about it just because it’s ground up like all other ground meats.

Since finding out years ago that McD’s uses a “ground pork mixture” as a base for their “McRib” sandwiches, I figured that ground pork loin was going to be the perfect place to start. Easy to work with, economical, and readily available at any grocery store. They probably add other “pieces parts” into their blend, but this is strictly the good stuff with no additives, “preservatives”, chemicals, fillers, or binders added in, either.

I made 10 “faux rib” patties out of it, to resemble exactly what theirs looked like, and simply used a wooden skewer to make make “rib sections”.

(*McDonald’s forms their ground pork into “rib shapes” before cooking.) 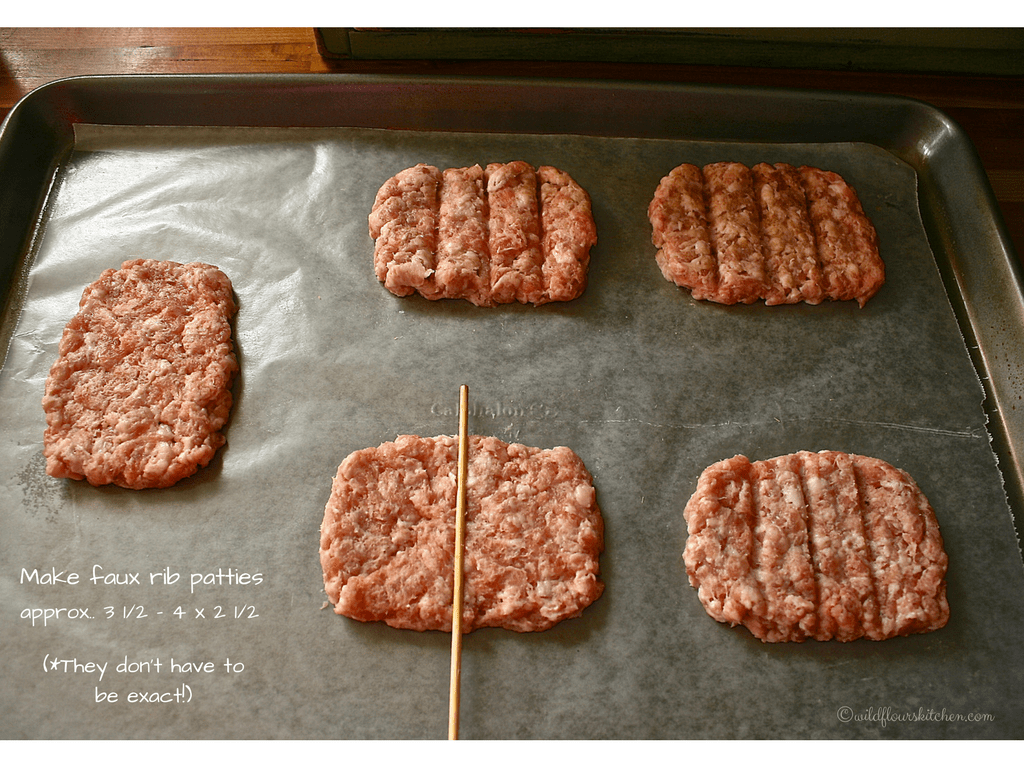 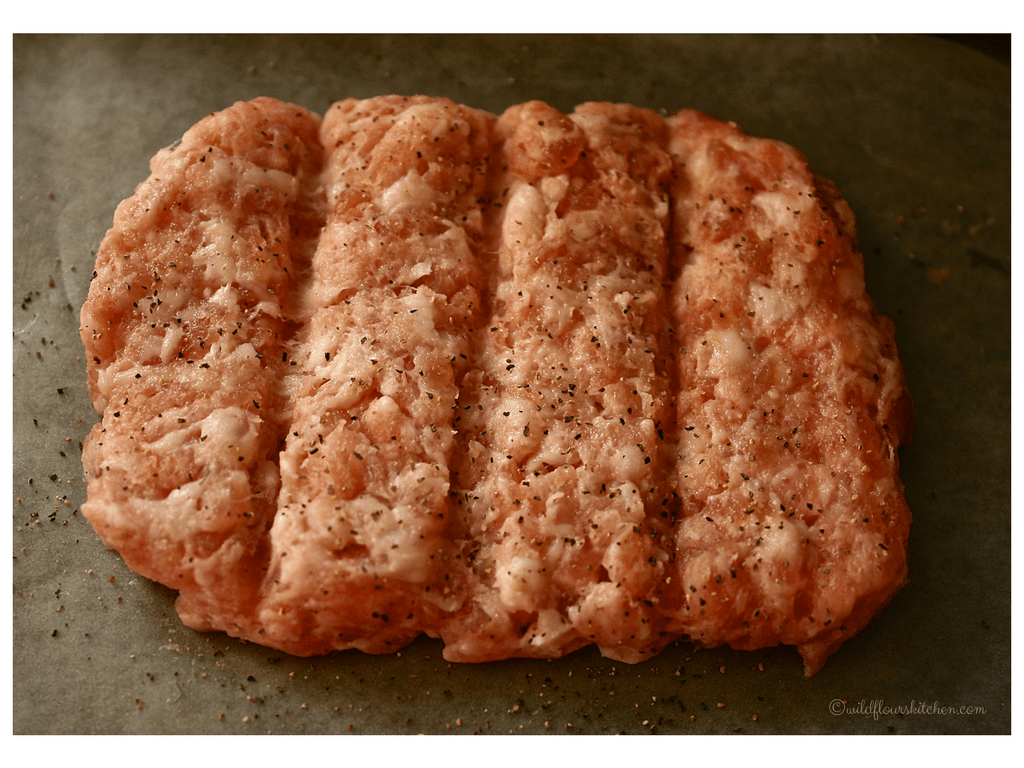 …sprinkling them only on the outside. *Ground pork is very soft to work with due to being so tender (as compared to other ground meats such as beef chuck that’s commonly used for burgers, etc.), and I didn’t want to mix anything in causing the ground fat and lean meat to become total mush.

I wanted the fat to be able to melt away while cooking, producing a leaner “burger” that would end up hearty and meaty. (I hope that made sense.)

Basically, I was afraid that trying to work spices into the soft, ground meat would end up resulting in a nasty, icky pâté…if you get what I mean. That would not be good. And would  make for a pretty gross burger patty that could be greasy and not fit to eat.

So, with all that said, don’t over-handle the meat at all.

I used a knife to cut through the meat into sections right in the package, (*outside plastic removed first), then placed each chunk right onto the wax paper to press into the shape I wanted for the sliders.

I then pressed in the lines with a wooden skewer and seasoned the outsides only. You could sprinkle on a few more seasonings, but if you’re going for the authentic flavor, a copycat that actually tastes like it (but better), just stick with the basics. I seriously doubt that they use much more than that. And they really didn’t need it anyways. 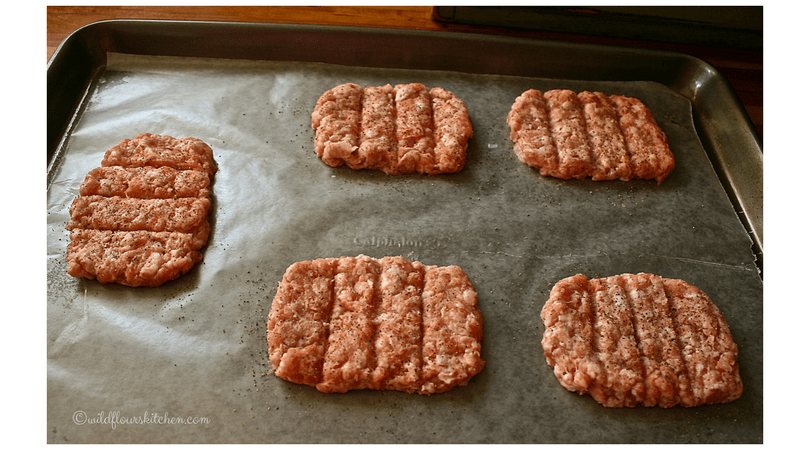 Once the patties are formed, cover them with another sheet of wax paper and chill them in the fridge for at least an hour.

*I chilled these for just one hour, then popped them into the freezer for 5 minutes only. You want the meat to be firm enough to transfer to a pan, and hold up when frying.

These babies fried up beautifully! Golden browned on each side! They were semi-deep-fried in the oil, and that seemed to work beautifully! *Pork is a sweeter meat, and can stick if you don’t use enough oil.

Once they’re done, transfer them to a foil-lined and sprayed baking sheet and coat the tops of each with lots of the special bbq sauce (recipe included). Then turn them over and coat each again. 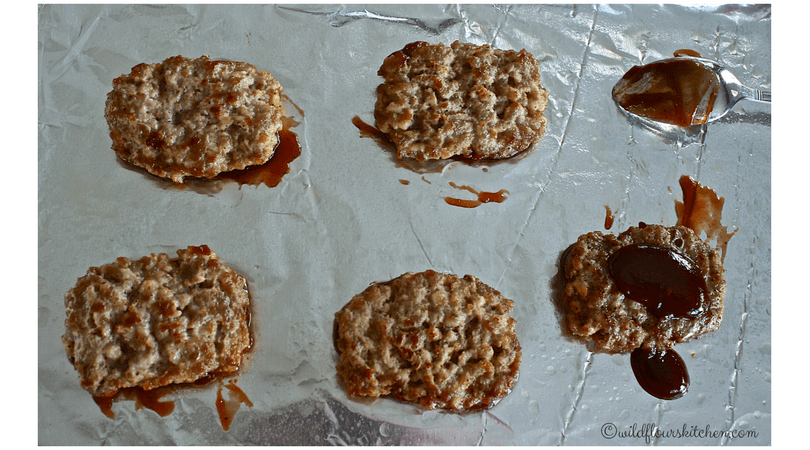 When they’re all nicely coated on both sides… 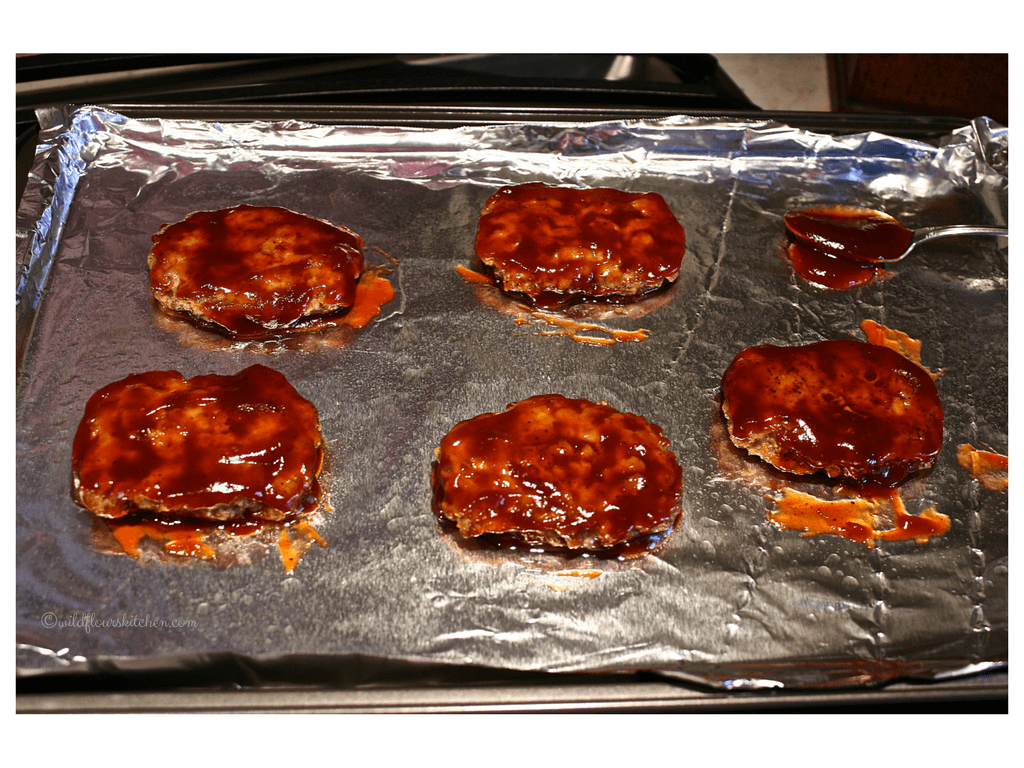 …pop them into a 350º F oven for just five minutes to set the sauce. 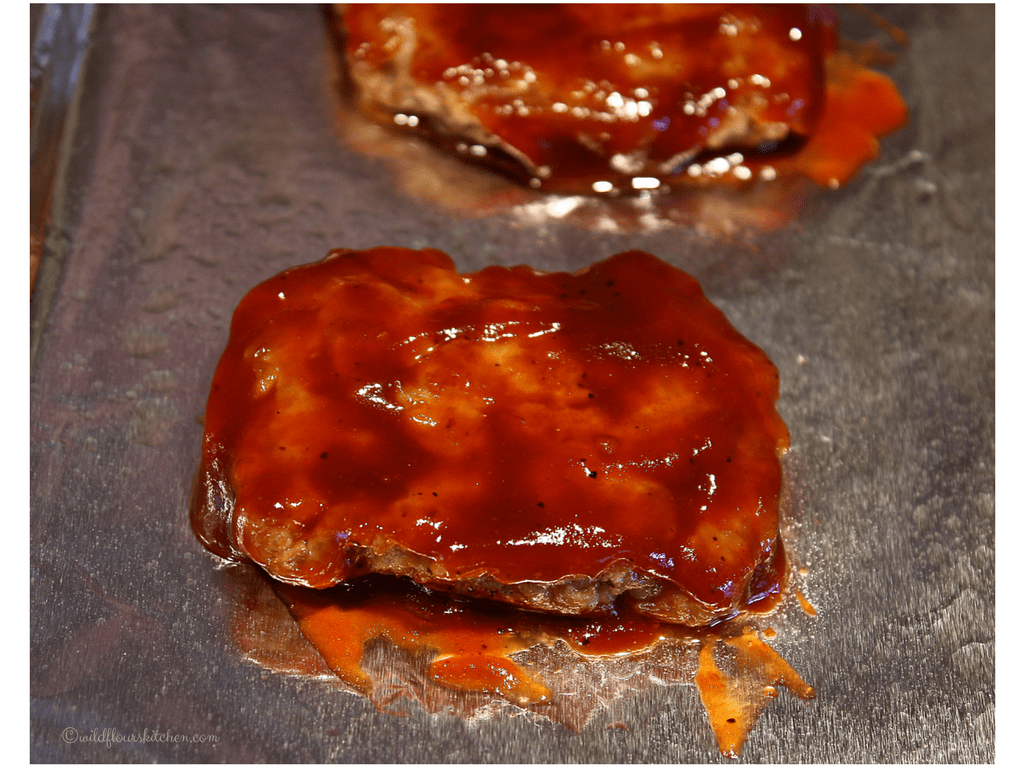 This is also a very easy way to finish a whole boatload of them if making these for a crowd! 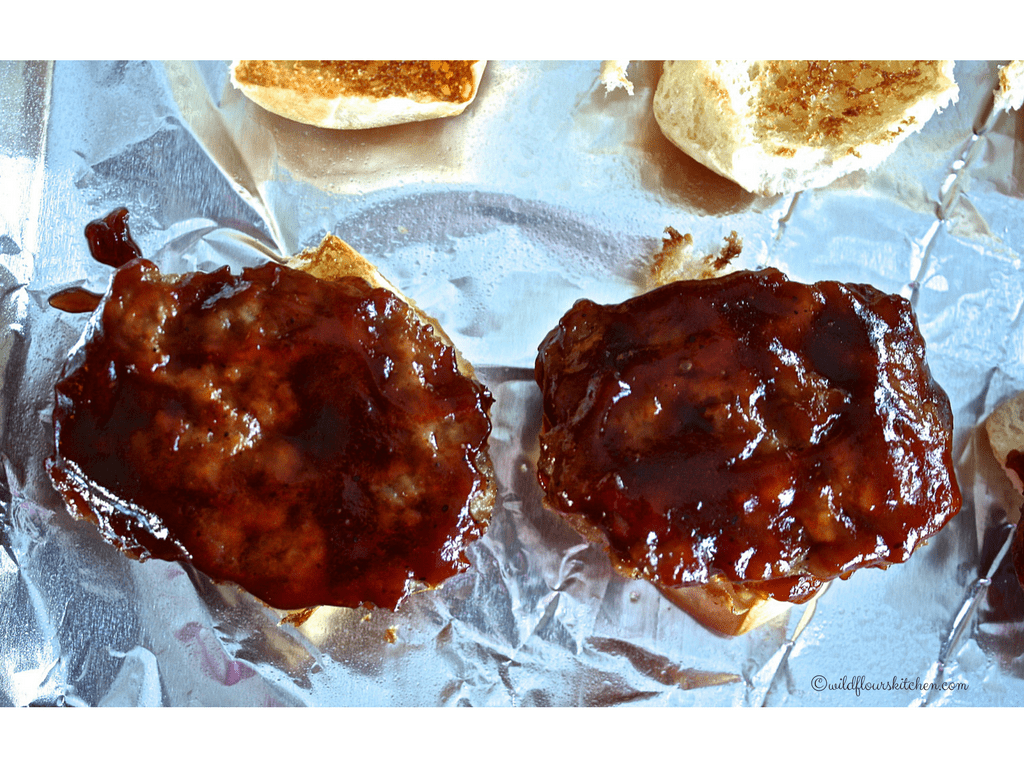 Then remove them from the oven, kick the heat up to broil, and spray or baste the insides of your slider rolls with melted butter. Pop them under the broiler, and toast the insides until lightly golden browned.

Watch closely so that you don’t burn them! 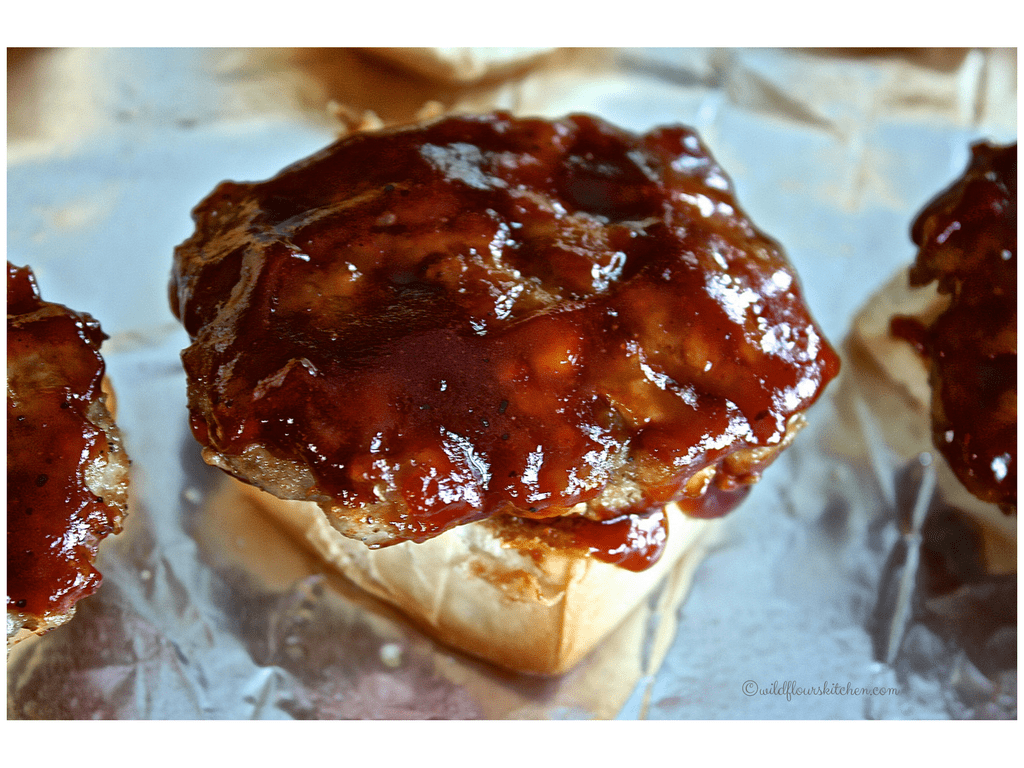 Literally one, two, three and done! 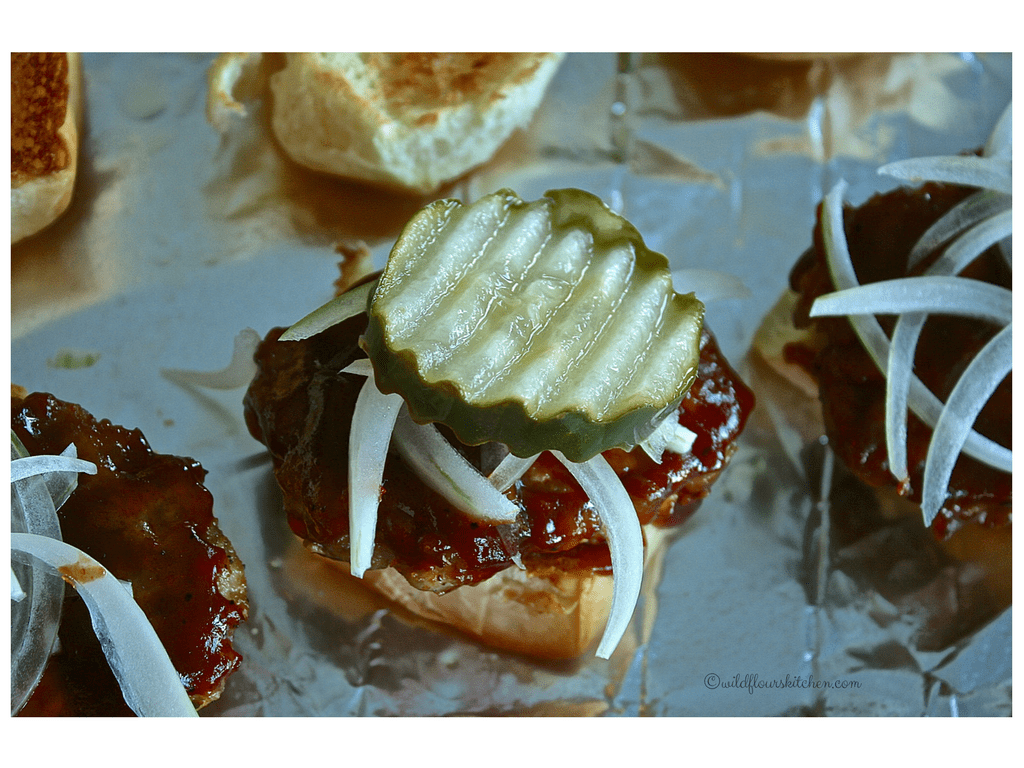 Just place a bbqed rib patty onto each toasted bottom roll, top with very thinly sliced white or yellow onion, and then a dill pickle slice or two.

*I used my homemade Garlic Dill Pickles, but you can of course use store-bought pickles. Mine were the perfect size, so you may need two pickle slices if using jarred. 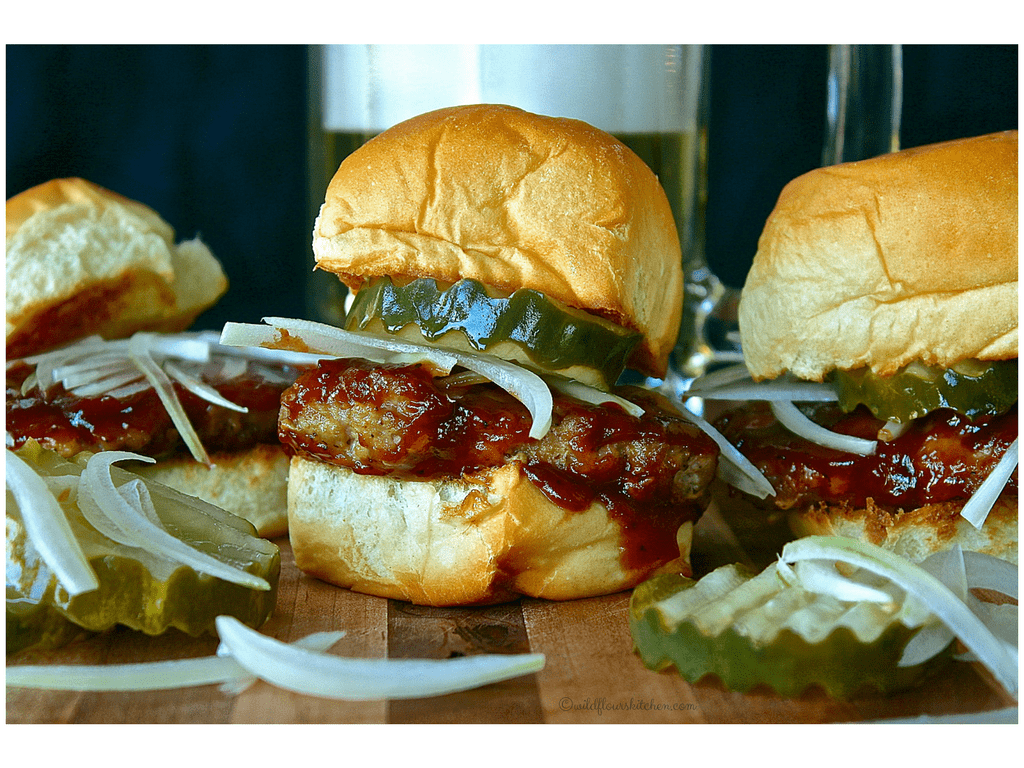 The inspiration for these, SPOT ON but better, mini McRib sliders!
(*McDonald’s McRib sandwiches are made from ground pork
formed into rib-shaped patties.)

*The photo below is by the McDonald’s Corporation. 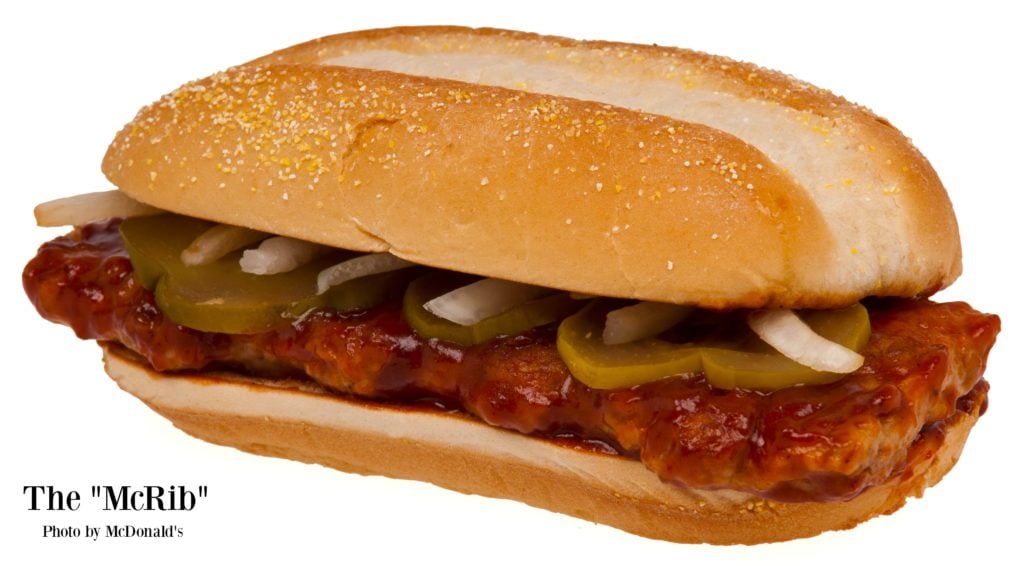 I cannot even tell you how much we enjoyed these tasty li’l buggers, and how much they actually tasted just like McD’s!!! Even I was surprised and quite pleased with my li’l self!!

They came together quickly and easily, and you don’t even have to make the lines or shape them like “ribs” either. I did it just for fun!

Just make sure that they are much larger than your rolls, (as meat shrinks quite a lot while cooking), so that you end up with a little overhang after cooking or they’ll be skimpy-sad. Who wants a sad-looking slider? Right?

And I highly recommend using the specific products that I used. *A different style and brand of barbecue sauce could actually equal disaster, and I don’t want you to be disappointed.

These really tasted like them, (but less “rubbery” with mushy “fillers”), and the flavor was spot. On. Using Sweet Baby Ray’s Original Barbecue Sauce, with 2 ingredients added, lended the perfect blend to mimic the sauce on the “McRib”.

Honestly, I can’t wait to make these again in a few weeks! For as simple-simon as they were, they packed a wonderful amount of flavor! They were easy and fun to not only make, but also eat, and would be a smash hit at any Sunday afternoon football get-together, New year’s Eve party, or Super Bowl bash!

They don’t require a ton of ingredients, and nothing exotic, hard to find, or just plain silly or expensive, either. They’re just something fun for everyone to enjoy!!

And I do hope you have as much fun making and devouring these tasty li’l Best Copycat McRib Sliders just as much as we did!! Life is so SHORT. Enjoy every single minute of it to the fullest.

Dishes that go well with this:

Homemade Condiments used in this recipe: