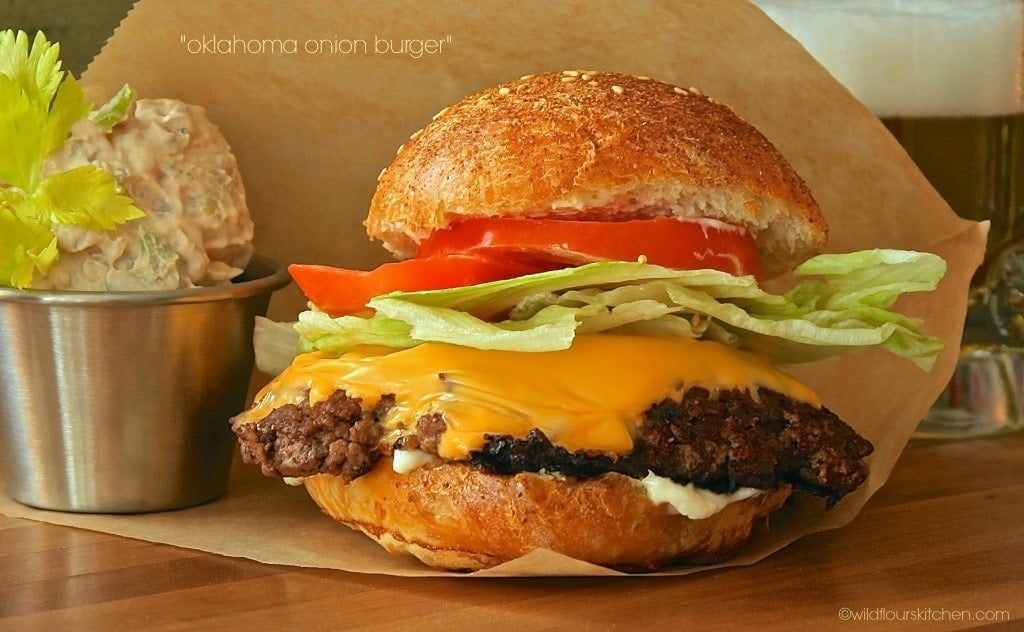 Ever heard of an “Oklahoma Onion Burger”?? Well, I sure hadn’t. Not until I saw them being made on the TV show, “The Great Food Truck Race”, last year! (Or was it the year before?) I don’t remember which season that one aired now, but they sure looked killer-good! Enough to not forget the burger! 😉

They seemed to be extremely popular in Oklahoma and with everyone who tried them, so I knew, as much as I LOVE a good burger, that I had to give this a try, too! 😀 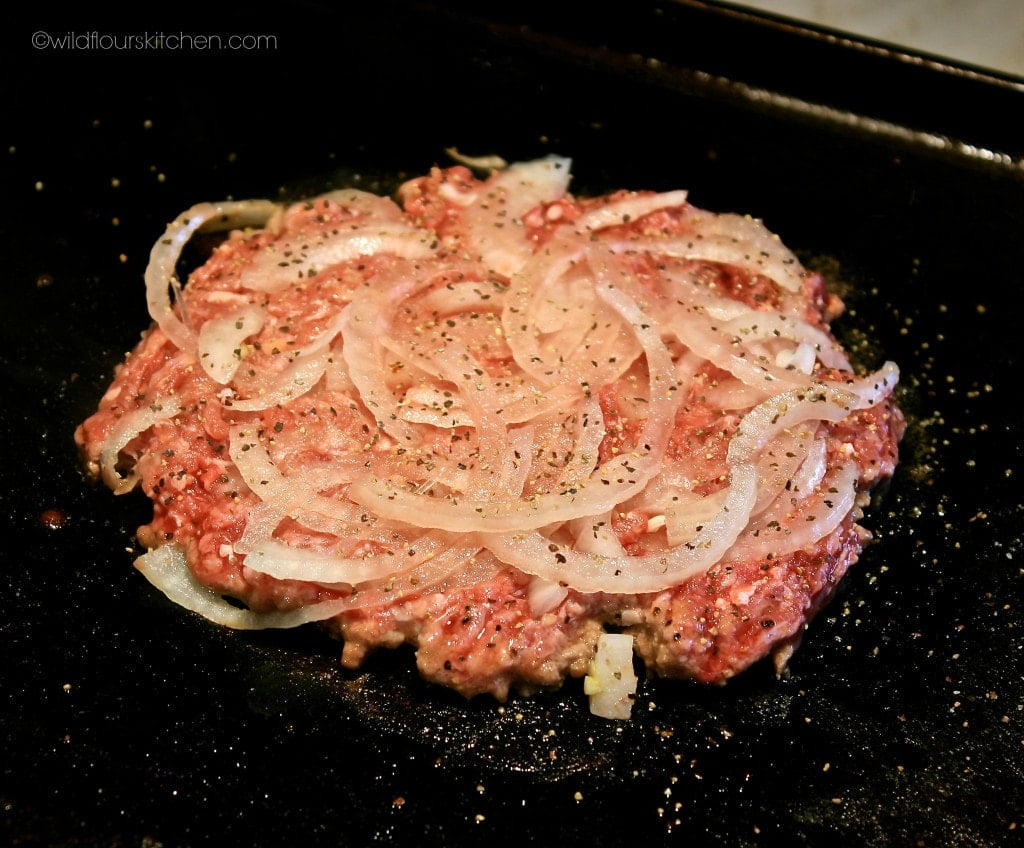 I happen to have the right “pan” for this, a long, double-sided cast iron grill pan that’s a grill on one side, and a griddle (flat) on the other that weighs a small ton!

But heavy enough to get nice and hot, more like a restaurant-style grill. And this worked beautifully!

You can use your own cast iron pan, or a pan that has a heavy bottom to achieve the nice browned “skin” that it will get. 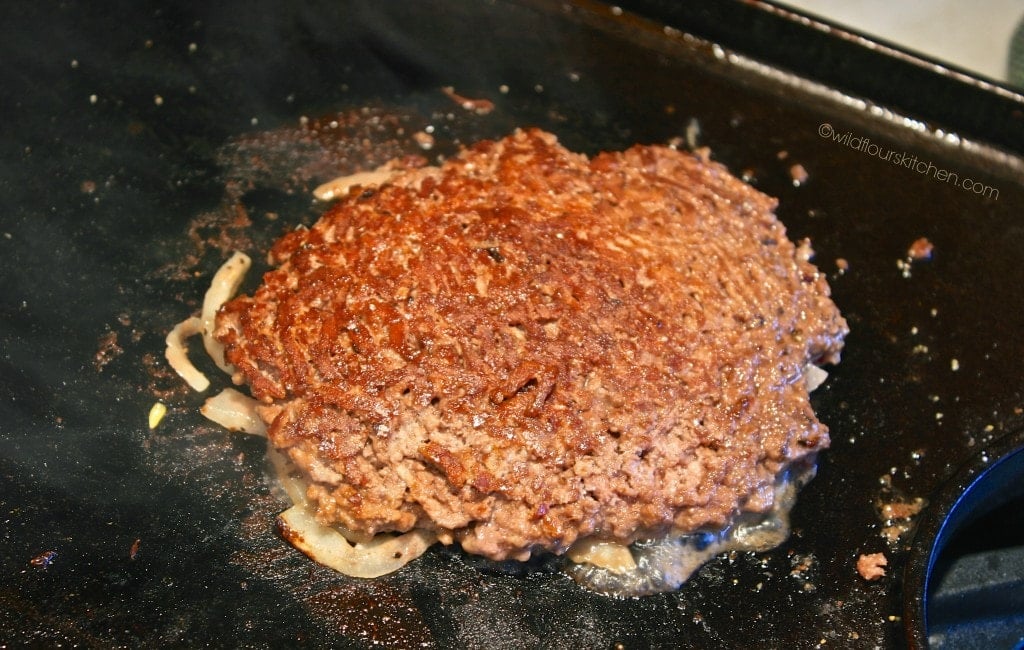 How you make them is just like this. You make a ball and place it onto the grill. Smash it down a little with your sharp spatula, place a handful of thinly sliced onions on top, then press the meat down until thin, smashing the onions into the top. Season it well with salt and pepper to taste. Then leave it be. Do NOT move it. Just let it do it’s thing.

You want to cook this for a nice amount of time, until the bottom is dark browned.

Then, using a sharp spatula, and it must be sharp, (a metal one not a plastic one), you want to scrape underneath to get that gorgeous skin off of the grill working all the way around then all the way underneath in the center to release it. The burger should be most of the way done.

Then flip it over and cook until just almost done. Just a couple of minutes left is all. Top with good ol’ American cheese, one slice or two, and let it melt.

I have a few dome lids that I love to use in cases like this! They really come in handy and help make the cheese melt faster! Great to use outside, too! 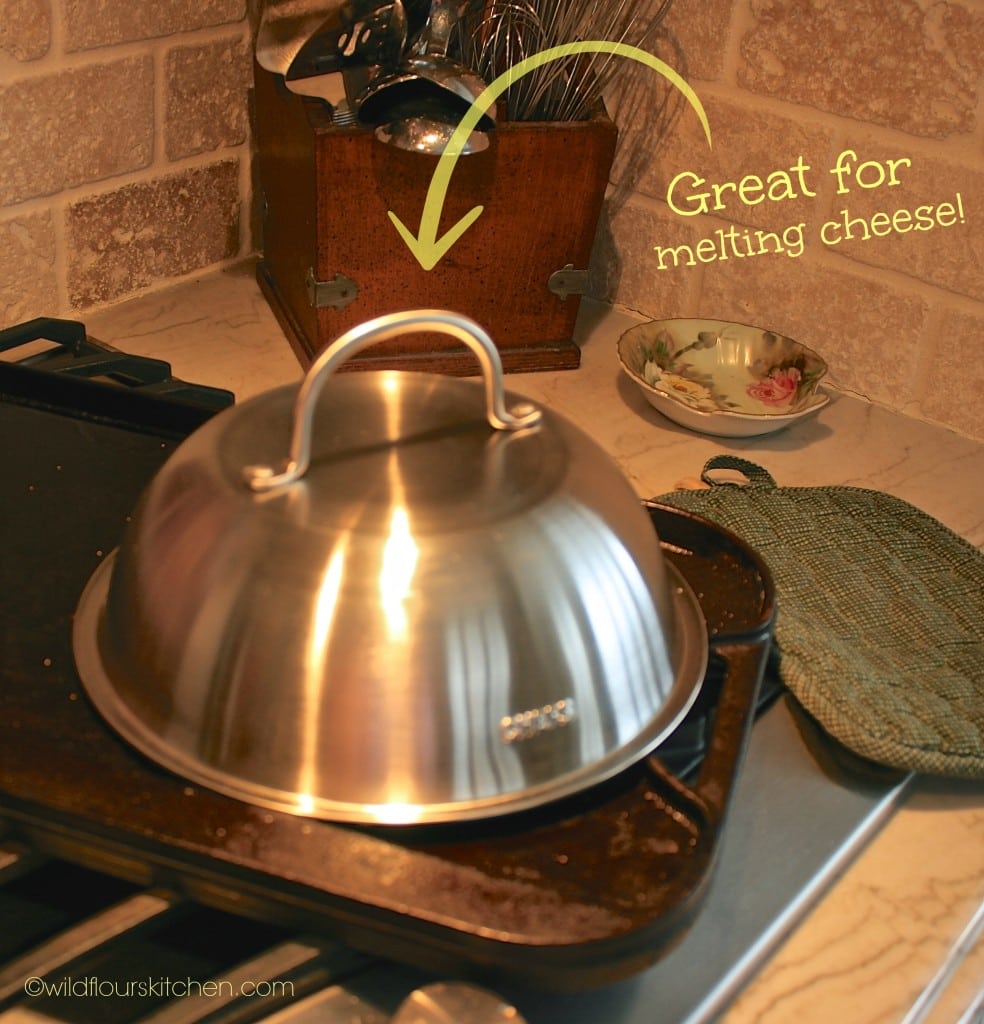 You can toast the buns (top and bottom) right on the grill, too. Then place the burger onto the bottom bun onion side-down! And that’s basically how you cook it! Easy!! 😀

*These two photos work really well for your Pinterest boards! 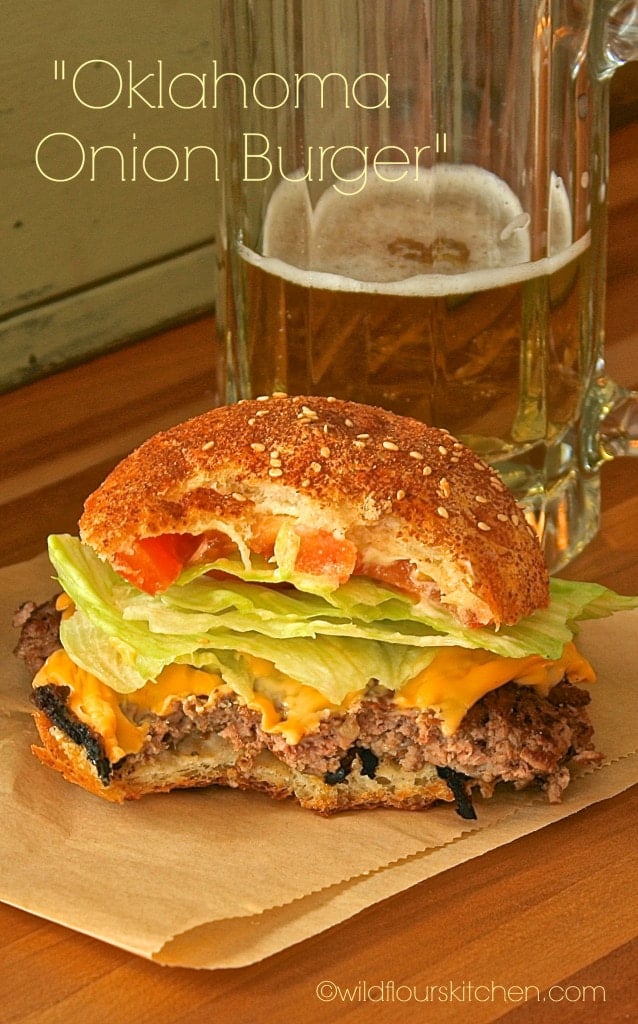 The rest is completely up to you. We went all-American and topped our buns with mayo on each piece, then lettuce, tomato, and ketchup on top. (I wanted some of my homemade bread ‘n butter pickles on there too, but I forgot to add them because they were out in the garage fridge! Dangit. Next time!! 😉 )

These went delightfully well with my French Onion Dip Potato Salad on the side,
and an ice cold beer! 😉 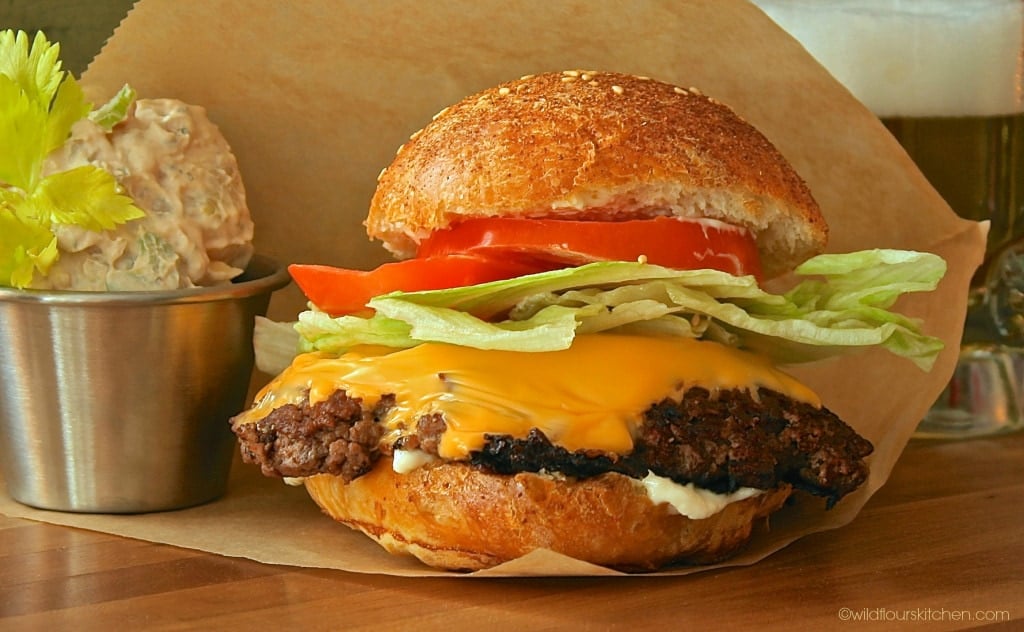 I even made the semi-homemade buns , changing out the poppy seeds for sesame seeds, and sprinkling the tops with seasoned salt, garlic powder and paprika! 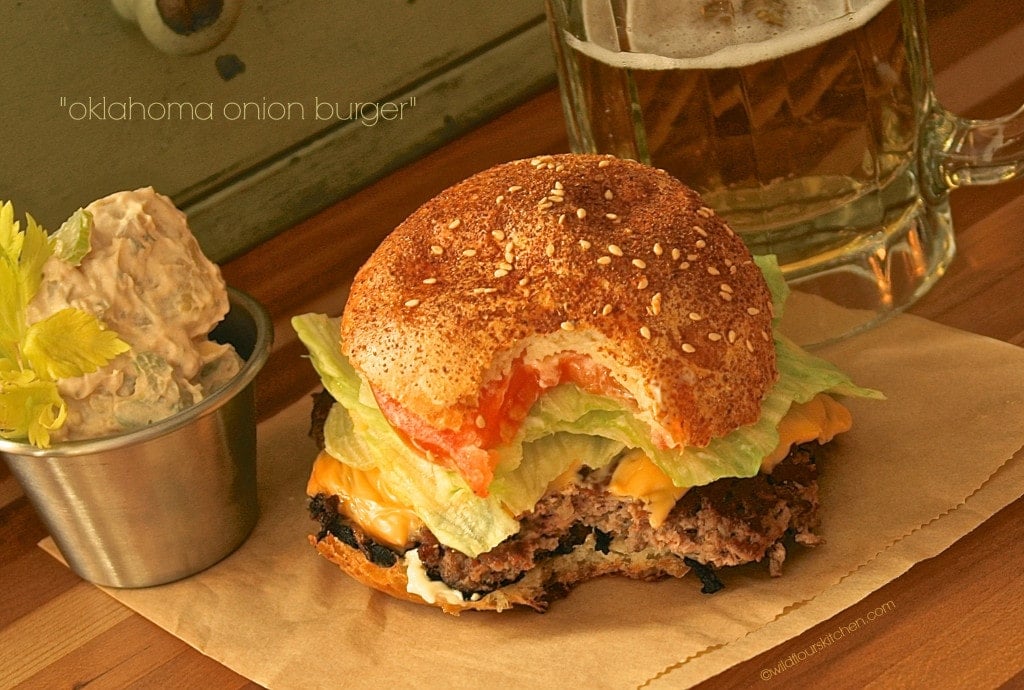 My onions got a little charred on one side just on the outside, but they were fantastic like that! So be sure to cook the first side plenty before turning them. Mine would’ve been as picture-perfect as the one that I made my hubby, but while I was trying to get some decent photos, I left it on my grill a bit longer than I would normally. So, just watch them once you flip them. Unless you enjoy a little charring like I do! 😀 😉

And seriously, try not to overcook them! Grey, dry burgers are only good for one thing…ice hockey.

I do hope that you give these a try the next time you’re craving a good burger! They truly were excellent!! 😀 Take care and enjoy! And happy cooking!! 😀

*”Oklahoma Onion Burgers” were originally made by Ross Davis who owned and operated the Hamburger Inn on Route 66 in Downtown El Reno, Oklahoma. Davis first began making “fried onion hamburgers” in the 1920’s during the Great Depression.

Cooking time on side #1 of your burger(s) all depends on how thick or thin you make them. I made 3, 1/3 lb. burgers. In Oklahoma they make 6 super thin burgers out of one pound of meat.
The other thing they do differently is, while melting the cheese, they place the top bun on the burger, then place the bottom one on upside down, on top of the other one, to steam. (We wanted ours toasted a little). So make them however you enjoy them!

Where did younget your lid?

I forgot you should also check out Onion Fried Burger Day in El Reno. They make an onion fried burgers the size of a king size mattress.... Not even kidding

Good job Kelley! I'm actually from El Reno and grew up on onion fried burgers. Having one is a must whenever I get a chance to get back home. I've made them at home plenty, but it's just not the same as having one in one of the dinners.

Oh and charring your onions a bit is exactly how it's done.

Thank you very, very much, Zach!! I really appreciate that! I love making them, but I know exactly what you mean about trying to make them like diners do! Have you tried making them on a cast iron griddle? Works really well for making them at home! Thanks for stopping by! :)