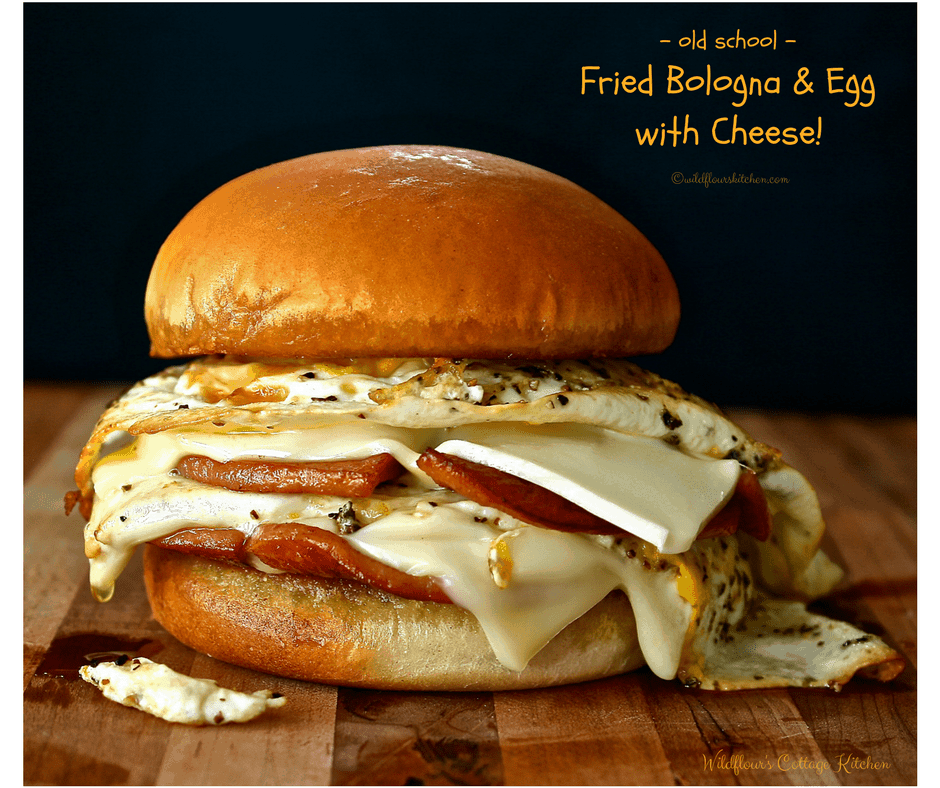 This probably isn’t the post you were expecting to see…the day before Valentine’s Day, when everyone is posting chocolate-everything, and fancy-schmancy dinner ideas. But this was actually my husband’s suggestion, and I thought that he was spot on. Breakfast in bed is always a much appreciated way to start a romantic day, and after I saw him write in LARGE capital letters on the next grocery list – – GARLIC BOLOGNA – – I knew exactly what he was dreaming of for a special breakfast. This Old School Fried Garlic Bologna & Egg Sandwich with Cheese!!

I had actually made these killer-delicious childhood sandwiches over a week ago…and the hubs has been begging for me to make more ever since!!

I actually laughed outloud when I saw what he had “cleverly” and “discreetly” added at the top of the grocery list. And I also celebrated a much debated win, too. 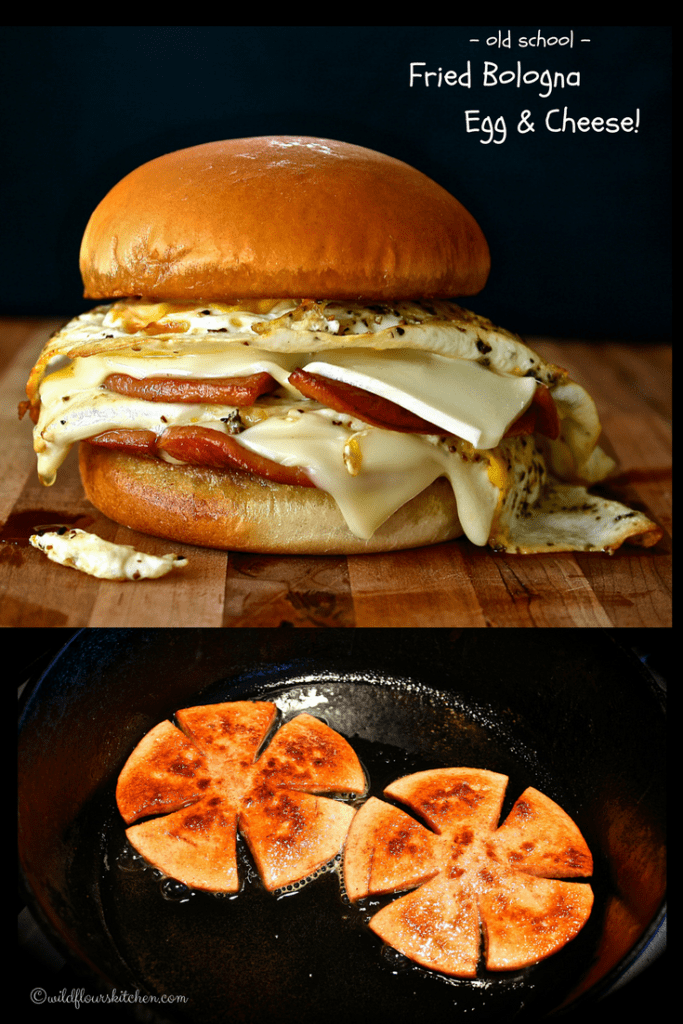 I can’t even tell you how many times I’ve mentioned this, and he has always snubbed it saying that it wasn’t something he liked as a kid.

Well, maybe it just wasn’t made right? I don’t know. But I finally said he had to try mine. And if he didn’t like it, he could always slap a few cold slices between some bread and just be happy with that then.

Well, needless to say,….he LOVED them. He asked for them every single day until there was none left. I’m just going to leave that right there. 😉 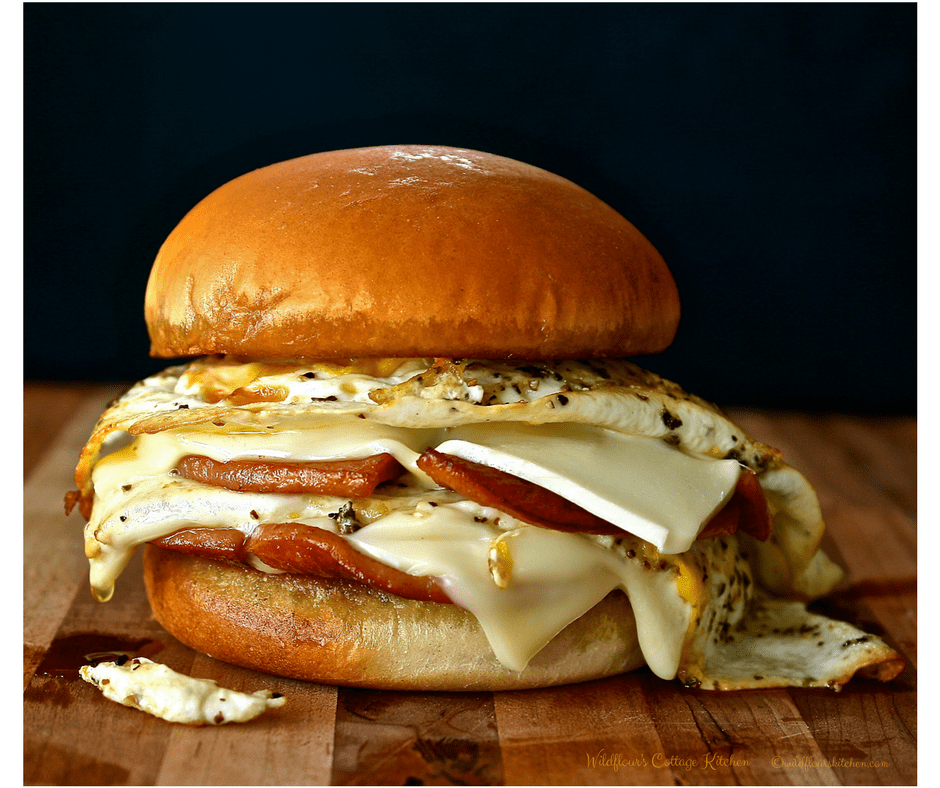 I also loved it even more, though,, because we got to cook together! Nothing better than cooking with the one you love!

I guess the first thing that sold him, and I’m sure you’ll agree, is to start with GOOD bologna. I’m talkin’ the good stuff from the deli. Not the dinky thin slices in the vacuum packed, horrible to open, regular ole “Aisle 10” grocery store stuff.

Though you could certainly use that if you prefer, we love a good garlic bologna. But as I said, you can choose whatever makes you smile.

And a must…you must have them slice it thick or it just isn’t the same. How thick is personal preference. You should go at least a 1/3 of an inch thick, but I’ve seen people go as thick as a half inch, even a whole one inch-thick slab!

*But the thicker you go, you’ll need to cook it more slowly (over lower heat) until it’s fully heated through and nicely browned on the outside. 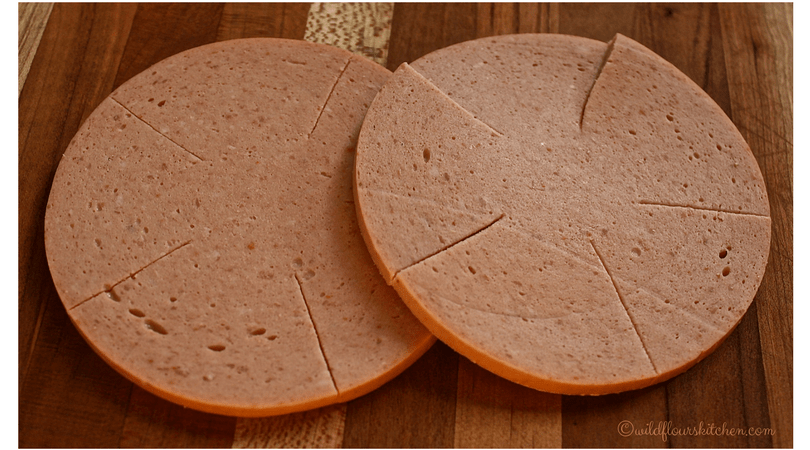 And this is important, too, to make this sandwich turn out absolutely perfect. To prevent the edges from curling up into a bowl-like, non sandwich-friendly shape, you do have to make a few cuts going from the outside in towards the middle. Don’t go in too far though, about halfway is how I do it, so it remains flat when frying, or it could be hard to flip over and possibly fall apart.

If this does happen to occur, don’t worry about it. Just pile the pieces onto your bun and all is good. It’s just a sandwich. Don’t sweat the small stuff.

I also prefer to do this in an old-fashioned cast iron pan because of the wonderful browning you can get. But you can use any pan you like.

So just get some good, real butter melting and bubbling first…. 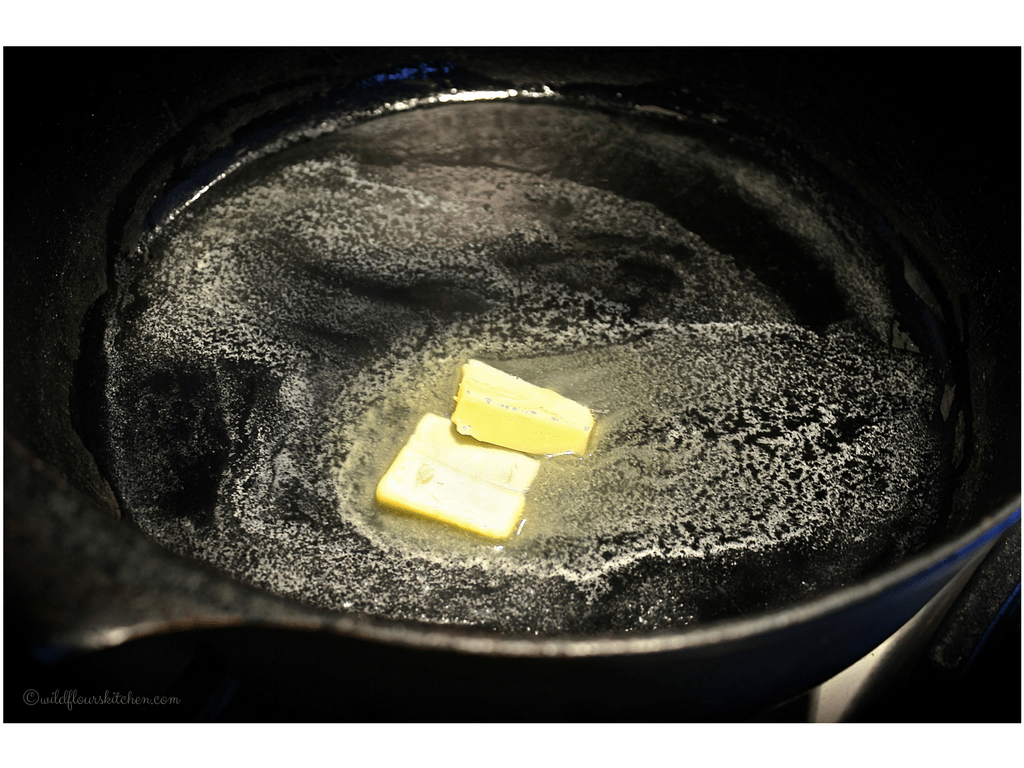 …then add your bologna slices.

You can make a single, or just go for it and make it a double like I’m doing here. 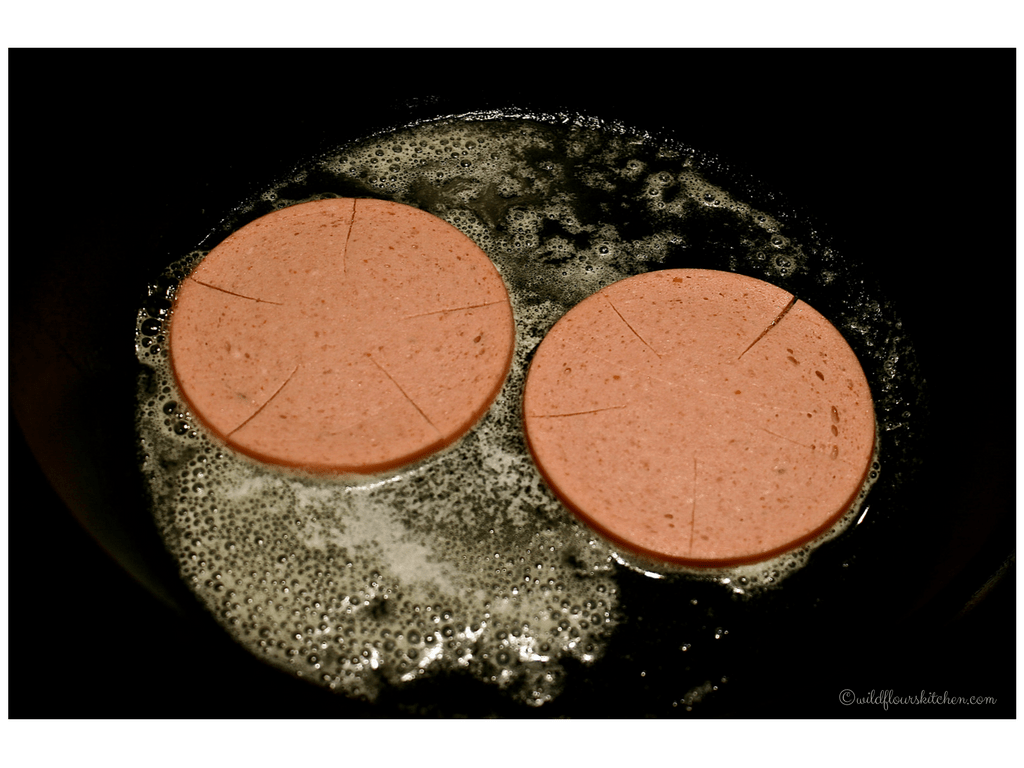 Just simply fry the slices in hot butter, on both sides, until golden browned! This only takes a few minutes per side, so this is actually a SUPER quick sandwich to make!

Once they’re gorgeously colored, remove them to plate and top them with a few slices of cheese. I used plain ole white American, and that worked perfectly! Right in tune with the theme! 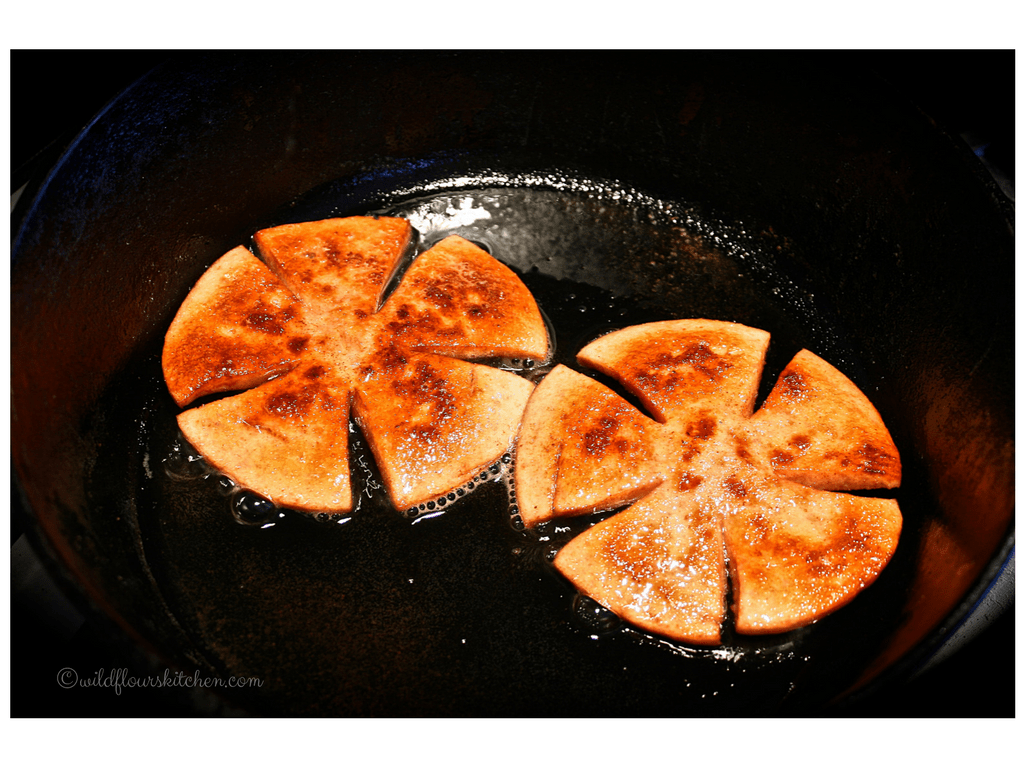 When the fried bologna is done and resting, topped with cheese, and covered for the cheese to melt and stay hot, I grilled the insides of the buns in the hot butter with all that extra yumminess from the bologna going on! Just takes a minute!

Once that was done, it was my hubby’s turn at the stove and he fried up two, well-seasoned, jumbo eggs to his liking!

You can add whatever condiments you want. He chose mayonnaise on the top bun, but mustard and or ketchup also works just fine. *This is your sandwich, so just make it any way you like!

(Personally, I would’ve gone for some hot sauce for this!)

Then, just place one cheese-topped fried bologna slice onto your bottom bun, top with a fried egg, then another bologna-cheese slice, and finish with another egg!

There you have it! VERY old-school, and is something that’s so delicious that has been forgotten and shouldn’t be.

Now. Wouldn’t you rather have this than a drive-thru faux-fresh mess?

So start the day off with a totally unexpected breakfast-in-bed-sandwich, serve some fried potatoes or even tots on the side, a glass of milk and juice, and to us, it’s truly a very special treat!

Anything that’s homemade is the best gift of all. ♥

Be sure to stay tuned to see what fried bologna sandwich I made for myself! 😉

Hope you enjoy, and have a wonderful Valentine’s Day!

And if Valentine’s Day isn’t your thing, treat yourself to a dang delicious sandwich! Not only are these wonderful for breakfast or brunch, they’re awesome for lunch and supper, too!