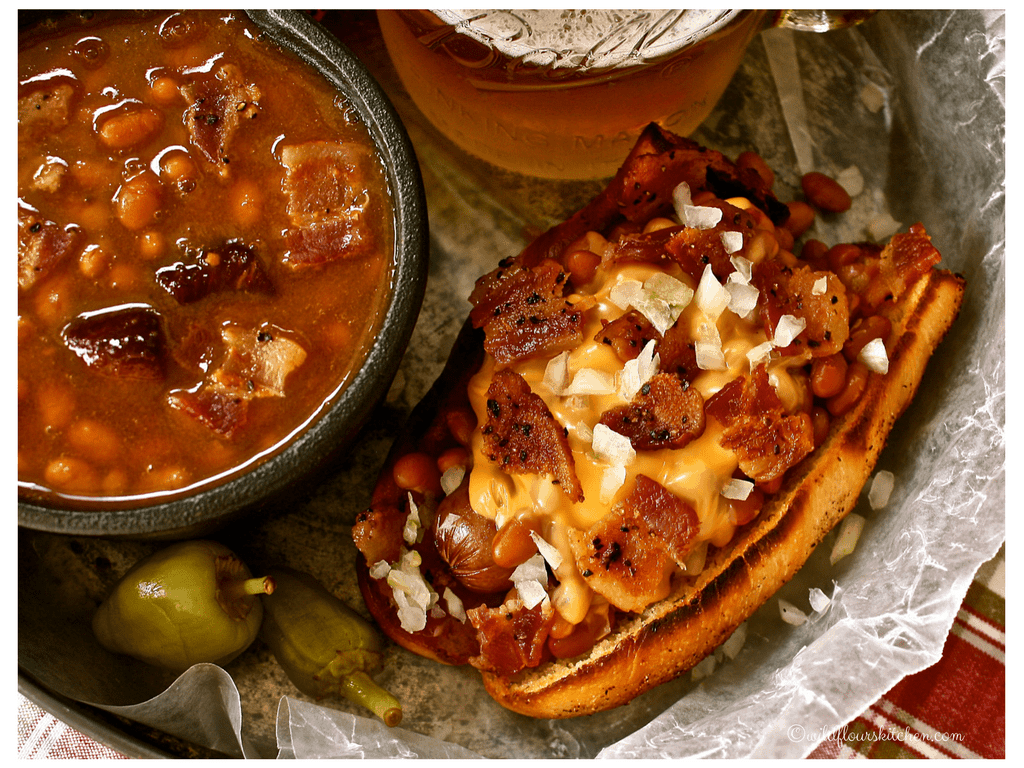 Hello! If you’re new to my blog, welcome!! Get comfy, grab a cuppa, and have a poke around! Almost 1,000 recipes to choose from with a little something for everyone here! And to quickly catch you up to what’s going on right now, I’m doing a “mini series” of how to take the boring out of a package of regular ole hotdogs, and turn them into something so fun that it will have your family racing to the table! You won’t have to call them twice for these Cheesy Barbecued Baked Bean Hotdogs with Bacon & Onions!

My hubby fondly nicknamed them “Beanie Wienies”, and said that they were hands-down, the best hotdogs he’d had in ages!!

I preferred the Corn Dog Fritters myself, although the Pesto & Pepperoni Pizza Dogs on Garlic Bread were pretty awesome, too!!! Ok, I guess it’s safe to say…I just liked them all!!

But no matter which one(s) you choose to make, they’re a budget saver that’s much needed this time of year, and delicious to boot. What’s not to love (and appreciate!) about that, right? 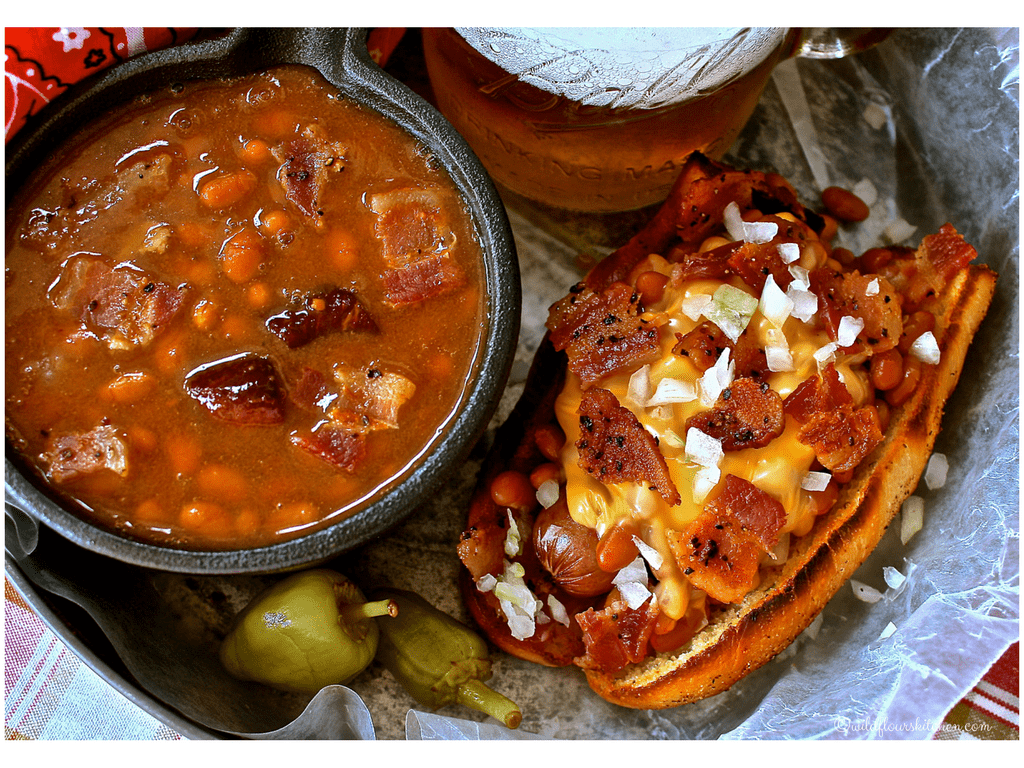 And if you’re only making a couple of these puppies, you can simply serve the extra beans on the side! Extra bonus! Who doesn’t love a built-in side dish that’s already hot and ready to go?!

I added a little bacon to them, but you can also add some cooked and drained hamburger or sausage to them to stretch them out if you’d like! Have a small can of black beans hiding in the cupboard? Drain them and add those in there!

Especially since they will be extra saucy from removing some of the beans for the dogs! 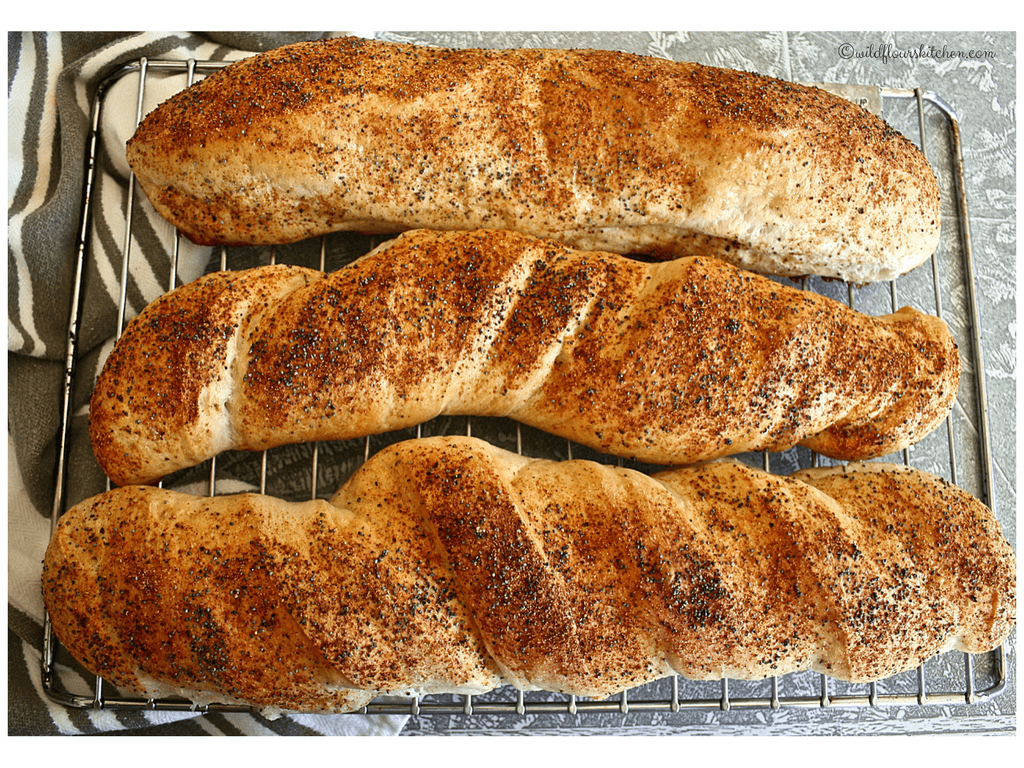 Another secret that I LOVE to do, is to take a one pound loaf of frozen bread dough, spray it with butter-flavored, no-stick spray, (Crisco is what I prefer to use), wrap it in plastic wrap and thaw it in the fridge overnight.

Then the next day, slice it lengthwise into three equal ropes. Place them onto a sprayed baking sheet, spray them well, cover them with plastic wrap, and pop them into the oven with just the light on. *This creates the perfect atmosphere to rise any kind of dough!

So, let them rise until doubled and remove them. Heat the oven to 350º, and while the oven is heating, sprinkle the tops with seasonings! Then just bake for about 20 minutes until golden browned!

Then you can slice them into whatever size you need. SO convenient, easy to do, and your entire house will smell like a bakery!! Nice way to start the day! 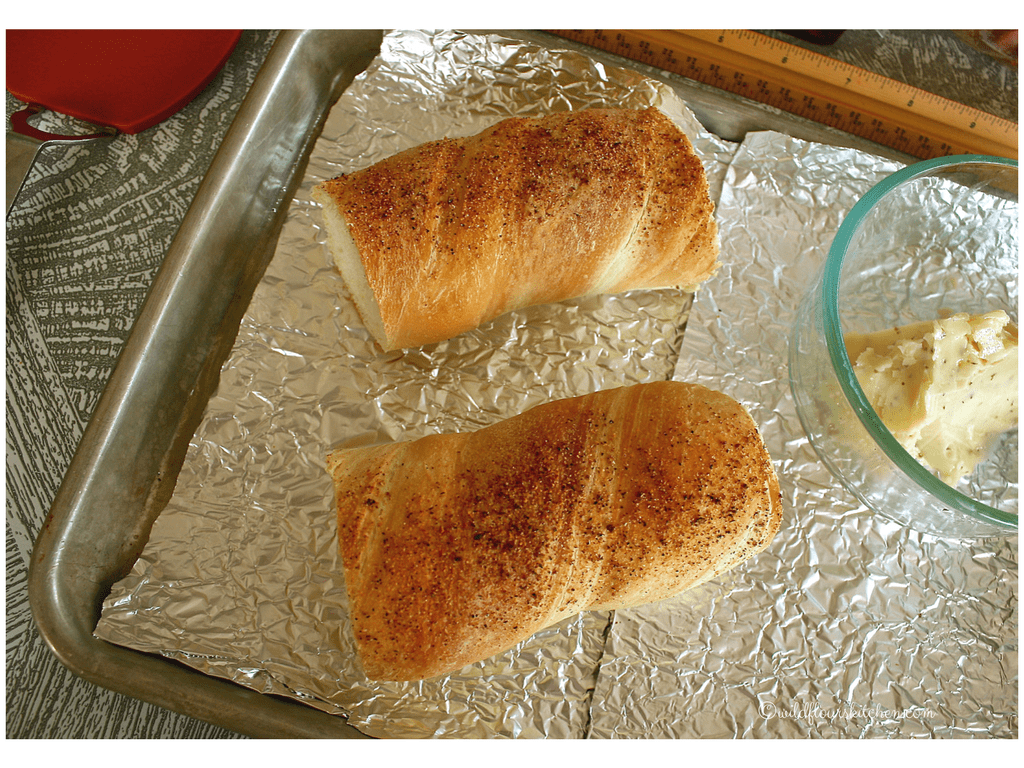 Let the bread cool on a rack, then slice open. Don’t try and slice it while it’s still warm, or it’ll be too soft. Once it cools it will be a little crispy on the outside, and still pillow soft on the inside!

The PERFECT blanket to wrap a hotdog in!! 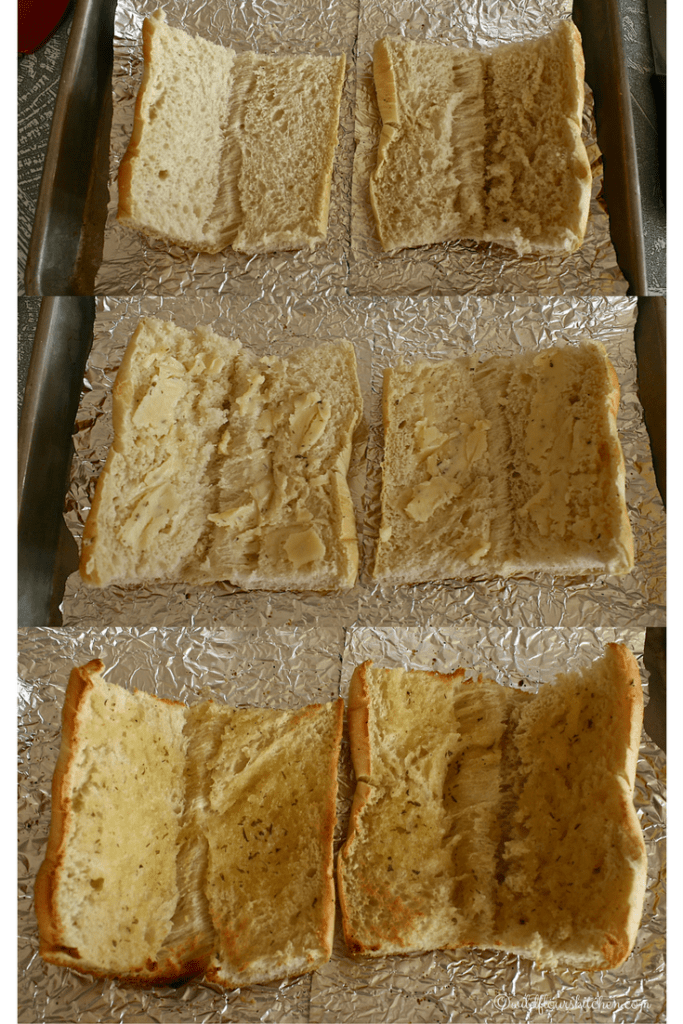 So for these, I sliced them into the length that I needed, then sliced them open and spread them with some Garlic & Herb Butter by Minerva Dairy. (SO good!!! Real butter, and absolutely the best!!)

Toast them on the insides under the broiler just until lightly toasted. You don’t want to take them any farther than that at this point, because we’re going to run them back under the broiler in a just a minute.

And if you don’t have the time to do the whole bread thing, these are some of my favorite buns that work extremely well, too! I’ve made these dogs often, and these buns come in very handy for them, too! 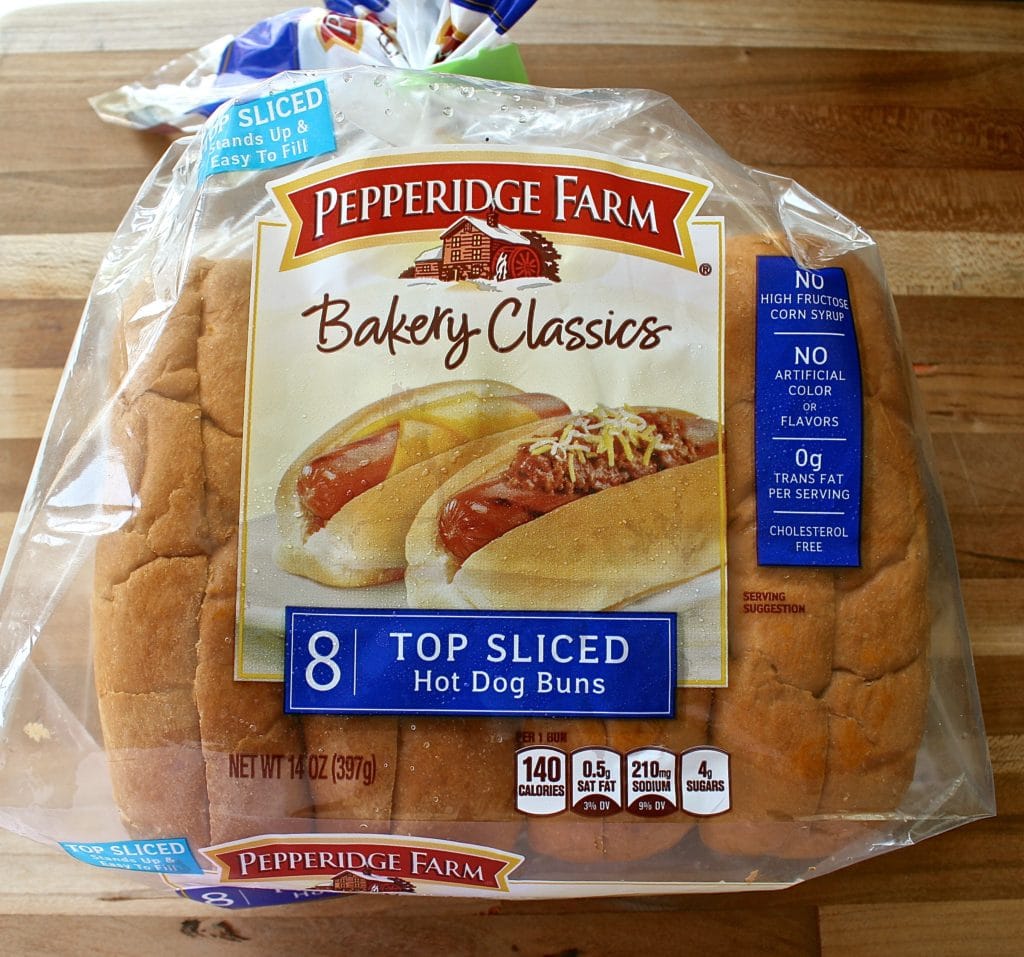 Just one of my favorite things to share with you, because, there’s nothing worse than a soggy bun! And unlike most you find at the grocery store, these buns really hold up! 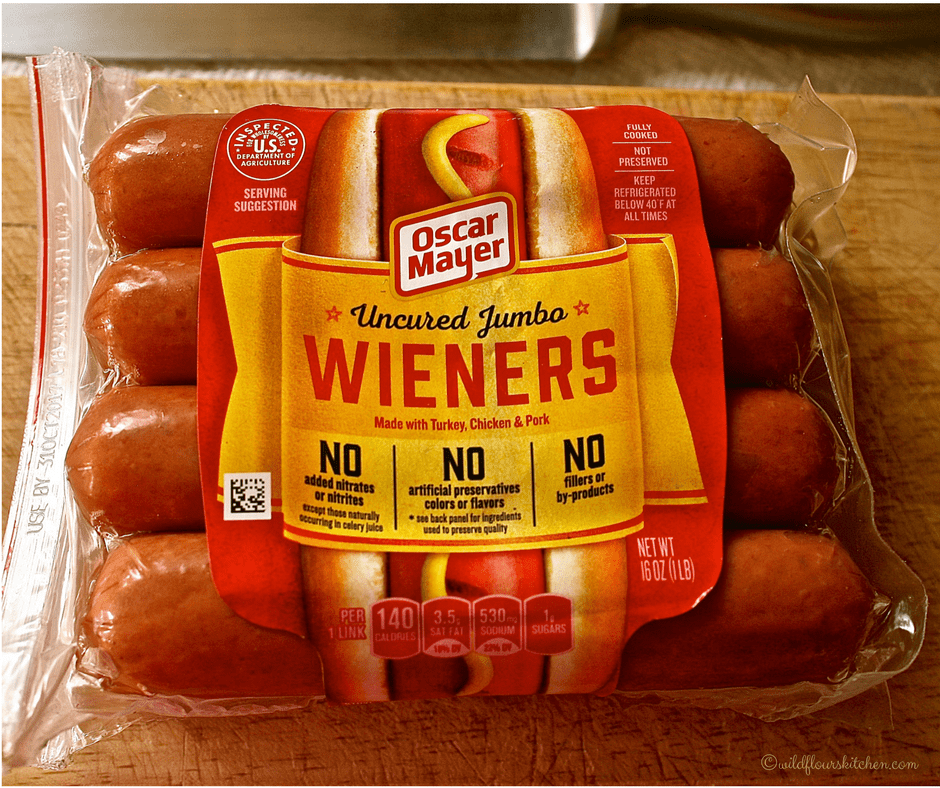 You can of course use whatever brand of hotdog that floats your boat. But I chose the classic, all-American hotdog, plain and simple, no frills no bull, Oscar Mayer Wieners!

And they worked perfectly! For these, I personally wouldn’t even think about using anything else!

I simply boiled them, and left them in the pot with the lid on to keep hot until I needed them. Couldn’t be easier or quicker! 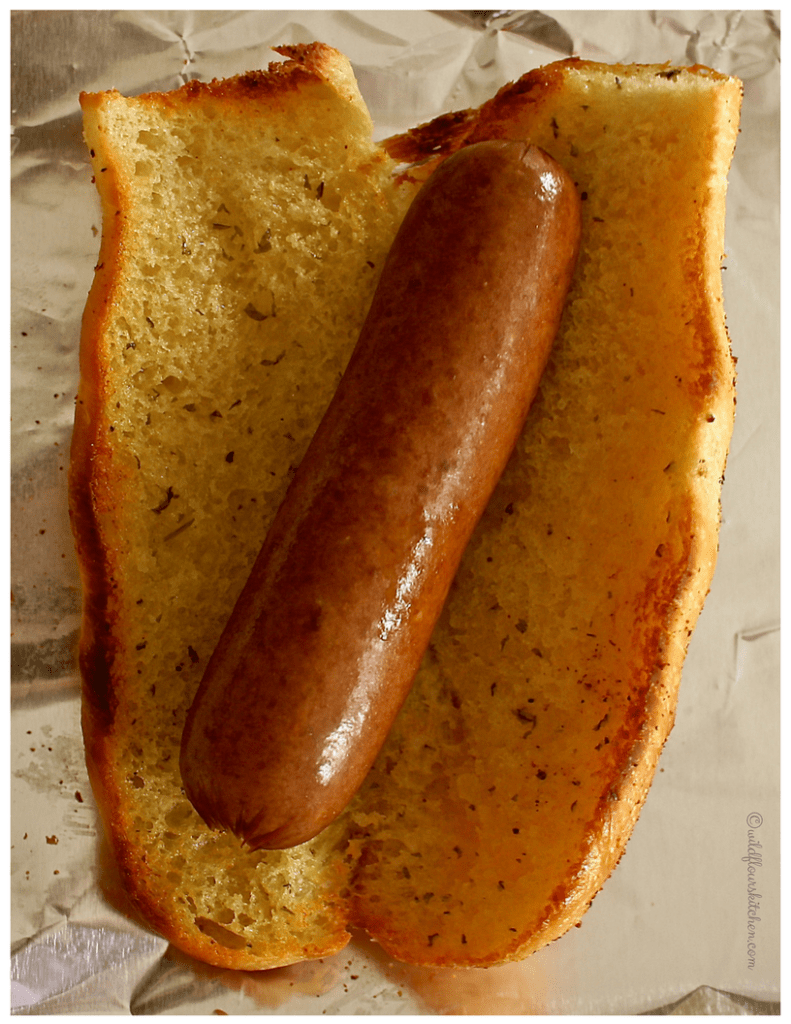 While the hotdogs cooked and rested, I warmed the beans, then using a slotted spoon, I piled them over the hotdogs that I placed on top of the buttered and toasted bread rolls. 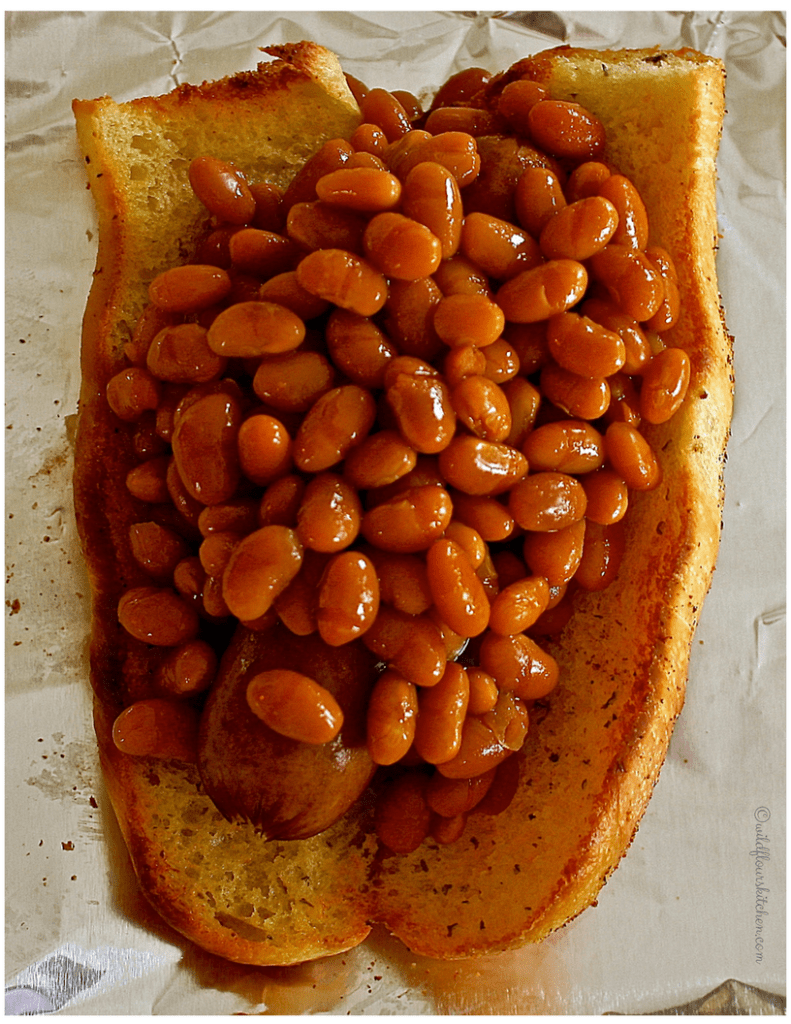 Next, I placed one slice of American cheese on each, torn up and overlapping to nicely cover…. 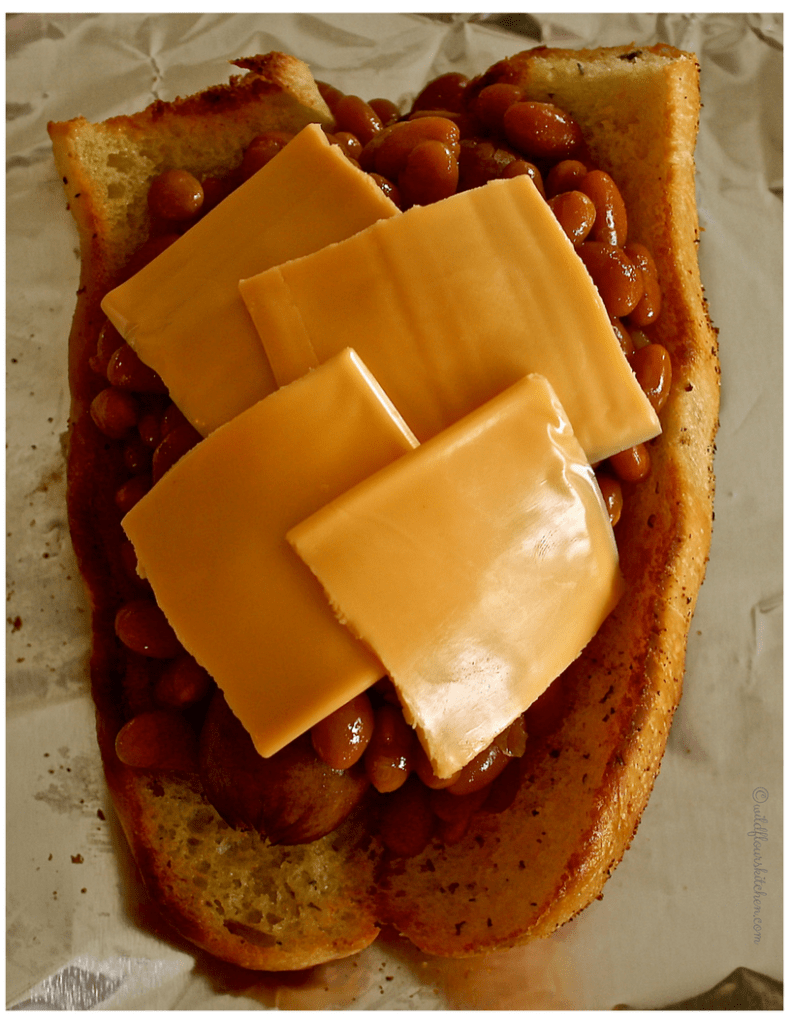 …gave them a second quick trip under the broiler, not too close, to melt the cheese… 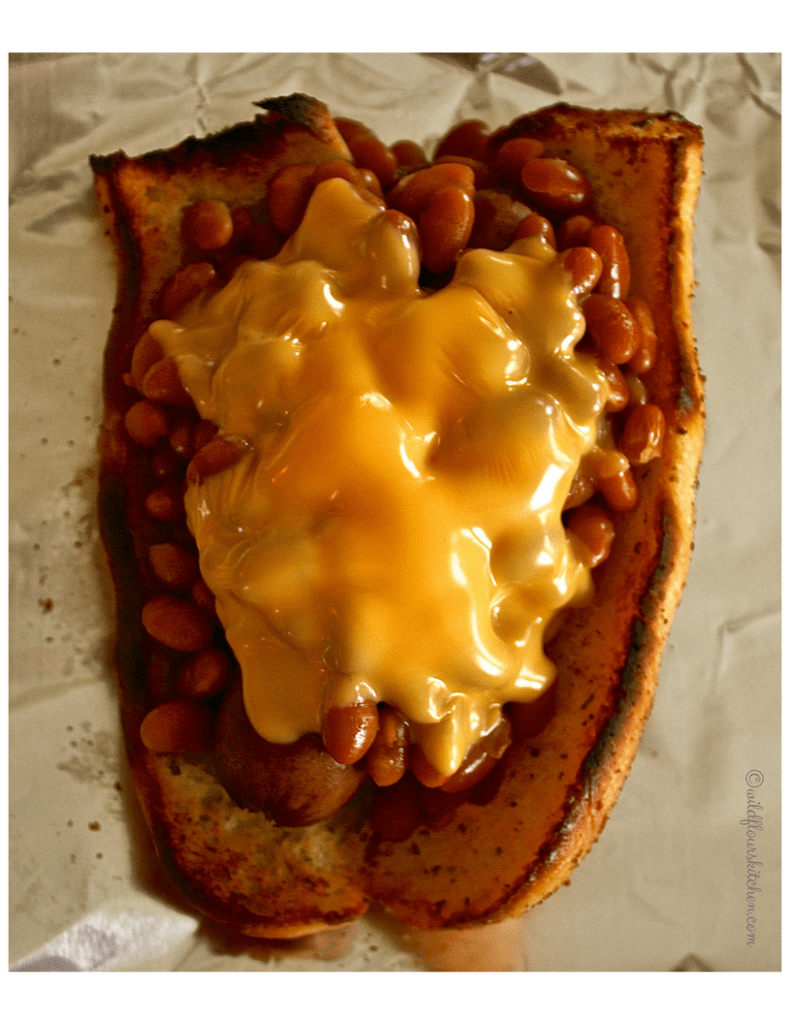 …..and my hubby was now literally minutes away from one of his favorite treats!!

All that’s left to do is to top them with crisp-cooked and peppered bacon torn into pieces, and sprinkle nicely with lots of very finely chopped onion!

That’s all he wanted and didn’t want to complicate the flavors any further, but you could always add whatever you’d like!

Barbecue sauce, mustard, ketchup, pickles, jalapeños, even tomato wedges or a little hot sauce would also be fun! Just make them however you would like them. 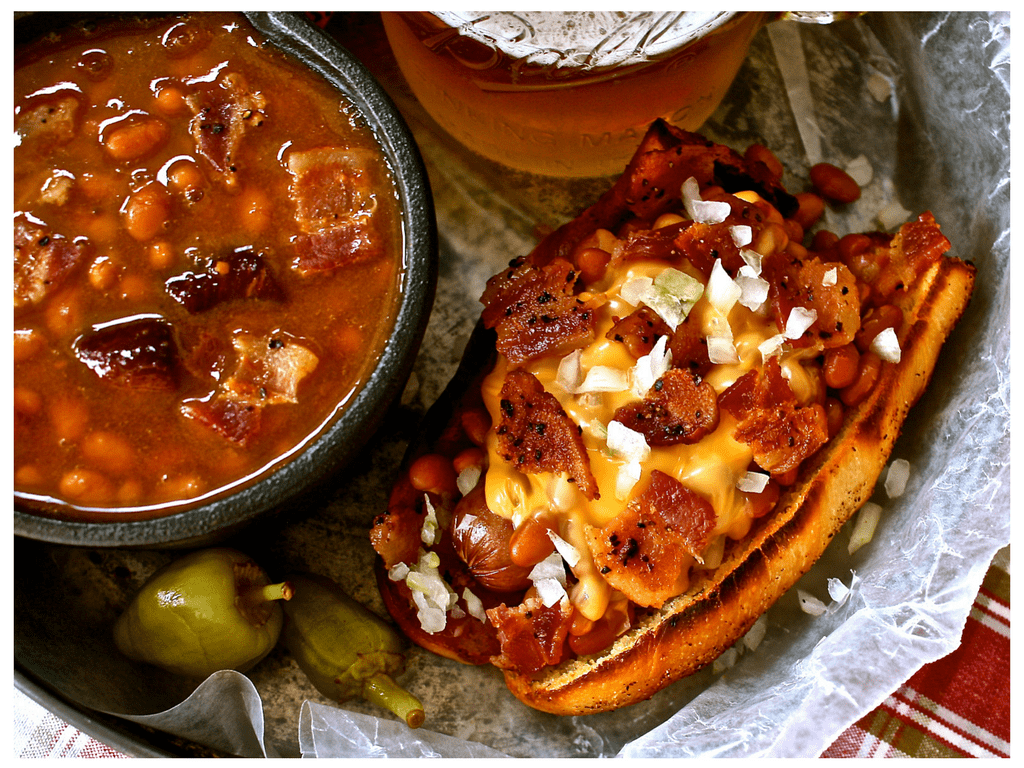 So if you’re feeling the holiday crunch on your wallet and looking for a fun way to make some tasty “cheap eats”, feed a crowd on a budget, or even just something fun on a busy weeknight for the fam, you’ll definitely want to keep these Cheesy Barbecued Baked Bean Hotdogs (aka “Beanie Wienies”!) in mind!

They’re quick to the table, simple to make, and saves your budget for the holidays! Hope you all enjoy!! Take care, and have a wonderful weekend!

*If using all of the beans for the hotdogs and looking for a cheap side dish to go along with, here are a few suggestions that would go really well with these!