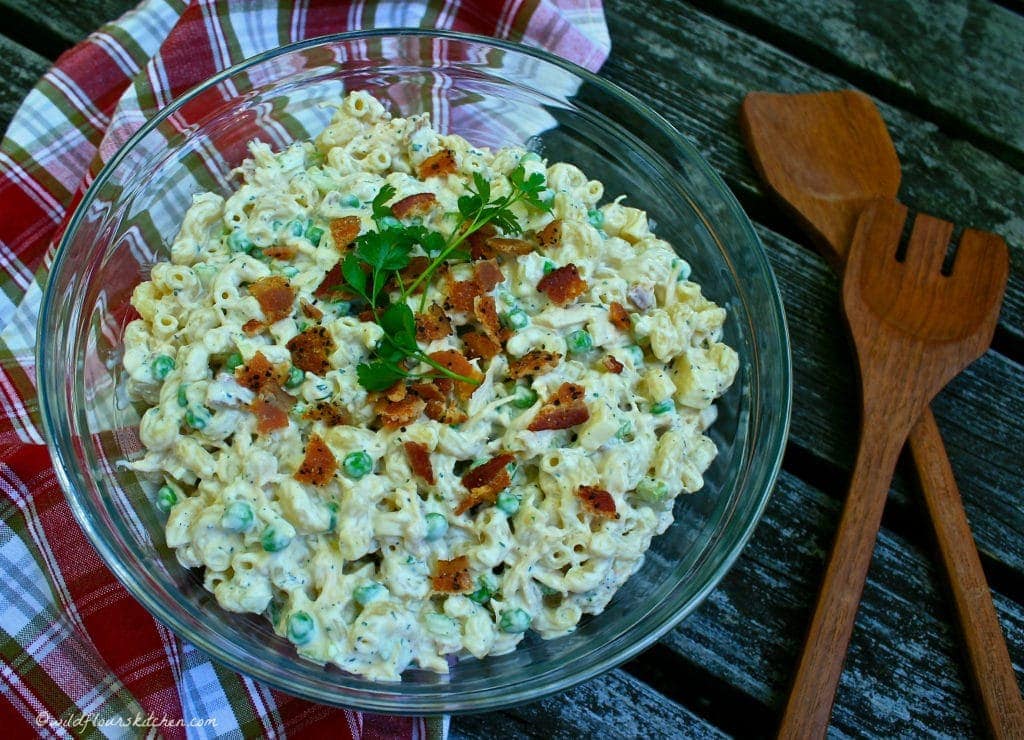 Well. It was bound to happen. I’ve never had to write an unfavorable review, but…

I don’t like being deceived. I don’t like being ripped off. I don’t like being lied to by extremely rude and condescending customer service reps, either. During a time when pennies are being pinched until Lincoln’s eyeballs are popping out, I have a strong dislike towards companies, GIANT WEALTHY corporations especially, who think that it’s ok to take advantage of the American people, steal from our holey, worn out pockets, and then lie about it. And when deceit happens, it means that everything that company produces, is now thrown into question. You completely lose people’s trust. And, you know, us consumer’s aren’t as dumb as you big companies must think we are.

Remember the “Footlong Subway Sandwich Scandal”, when someone took a ruler and actually measured their sandwich bread, and it was just an inch short of a full 12 inches? And not just a few loaves, all of them were consistently short. Well, Swanson (owned by Campbell’s), shockingly, is shorting people a LOT more than that! A WHOPPING 27.5%, actually! Sooooo, there’s NOT 28% more, it’s actually the complete OPPOSITE. 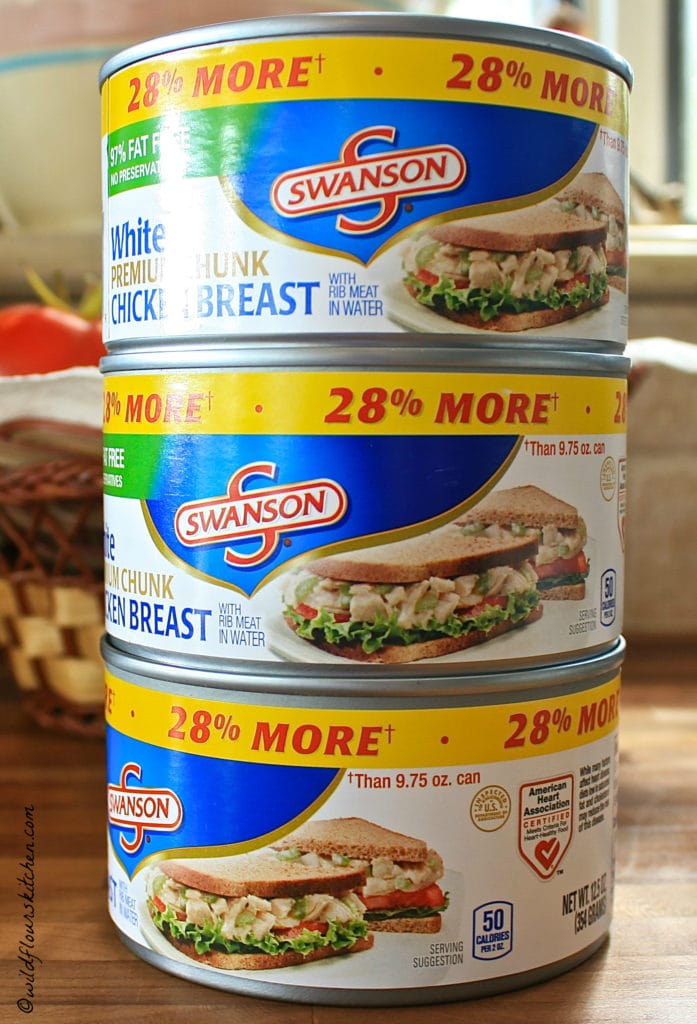 And is intentionally deceiving us by their bright yellow label on their new cans promising 28% more (than a 9 1/2 oz. can in small print!) Wait, but… 28% more what?? Water?? The actual amounts aren’t even close to what they have printed on the outside of their can. I measured. 3 times. (*4 times en total including this post). On a pretty accurate and extremely consistent digital scale. Three different cans, and all with different dates and production numbers on the bottom. I got the same results, spot on, each and every time. I wondered why the larger cans were making less chicken salad than the old smaller cans were for my hubby’s lunches!! Now I knew why. Paying MORE for LESS isn’t funny. 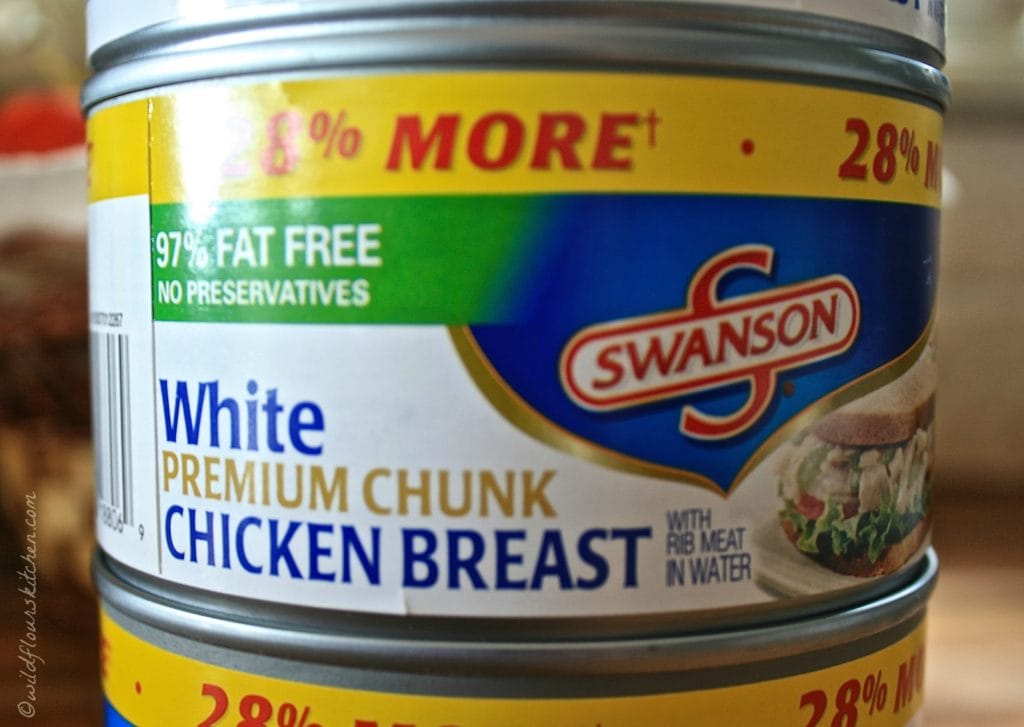 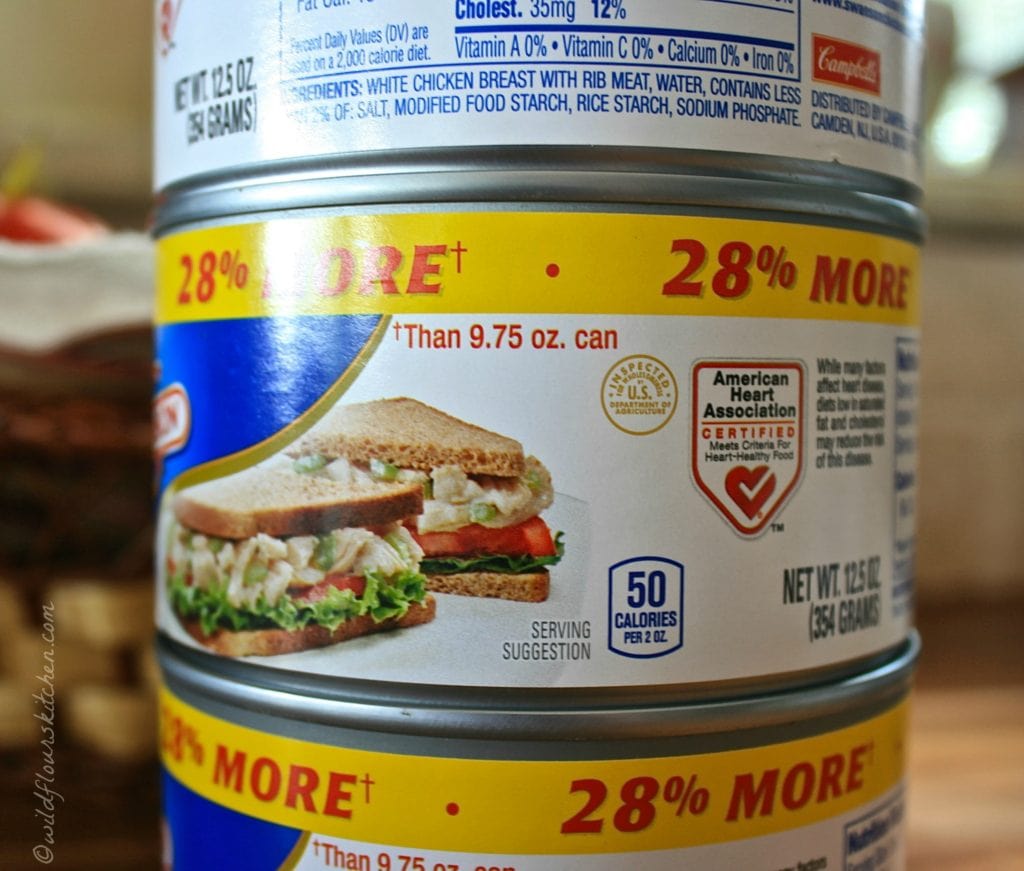 When I decided to weigh everything, and realized that they were all consistently short, and that I didn’t just “get a bad can”, I felt we needed to call Swanson. They were deplorably rude to us. One of the reps actually flat-out lied to my husband. We got a different excuse from each person we spoke to, about what was going on. The final conclusion, (after battling them for a MONTH over this), was that their cans were not correctly labeled. They said they’d “check into this matter immediately”. We said we’d give them a month to figure something out. Make a decision to either change the labels, or start putting the correct amount of chicken into the cans. Guess what happened? Yea. Nothing.

So, I just wanted to let you know, buyer beware, that their cans do NOT contain the amount that they say they do, the serving size/ounce on the back is NOT true, and you’re probably just better off stewing a few chicken breasts, (MINUS all that “rib meat” whatever THAT is), and freezing it with a little bit of the stewing water that you cooked it in to keep it moist, and just skip the cans. Hey, if you don’t mind paying more for less and don’t care that the company isn’t being honest, go right ahead and buy it. But my husband and I, for two, would like to see this company ante up and just do the right thing. Yea, they finally, to get rid of us, reimbursed us for the cans we purchased and sent some coupons. But the sad fact remains, that they are deceiving the consumer. We just want them to either change their label, or put the correct amount of chicken in the can. Should be simple. As well as legal.

Here’s photos of three cans we have left after we had stocked up, showing the labels, (false) advertising, amounts, and what you actually get when I decided to do a blog on this and take photos. Even the unopened cans weighed differently. Some weighed 15 1/4 oz., some weighed 15 3/8 oz. That’s just a very minor difference….until it’s 500,000 cans….

I started by measuring these three unopened cans, this one was slightly lighter…. 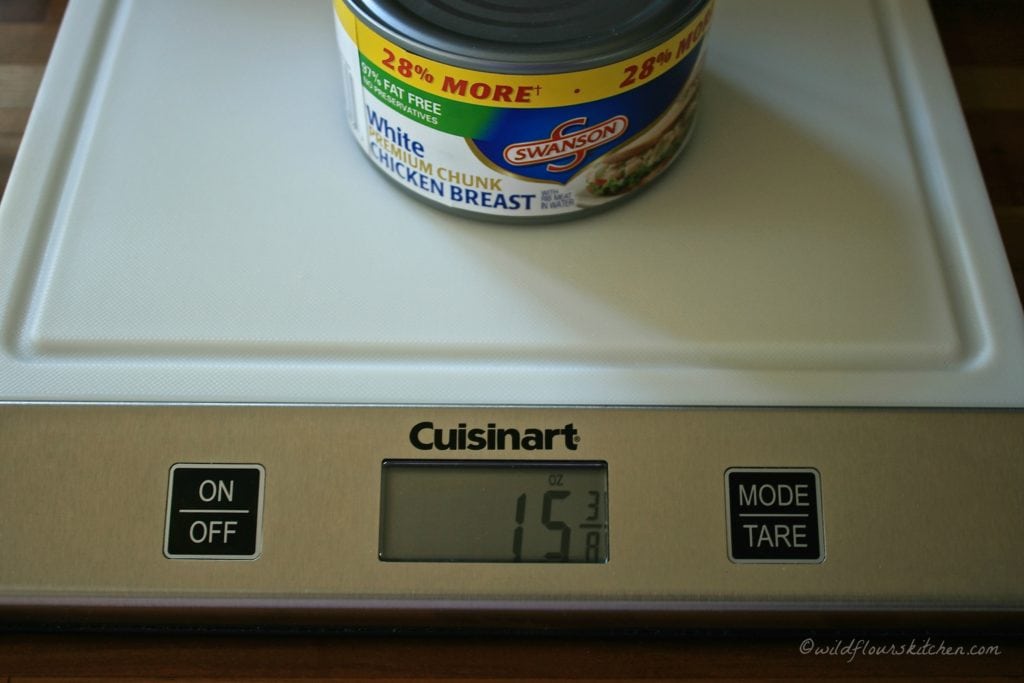 …and this one was slightly heavier. I continued the photos using the heavier one to give them full “benefit of the doubt”.

(*Note that for THIS experiment, only one of these cans were opened. The original 3 cans that were weighed that prompted me to finally contact Swanson, were all completely weighed, same as I’ve done here, 2 months ago, with the exact same results as I got from this one that I have documented for this blog). 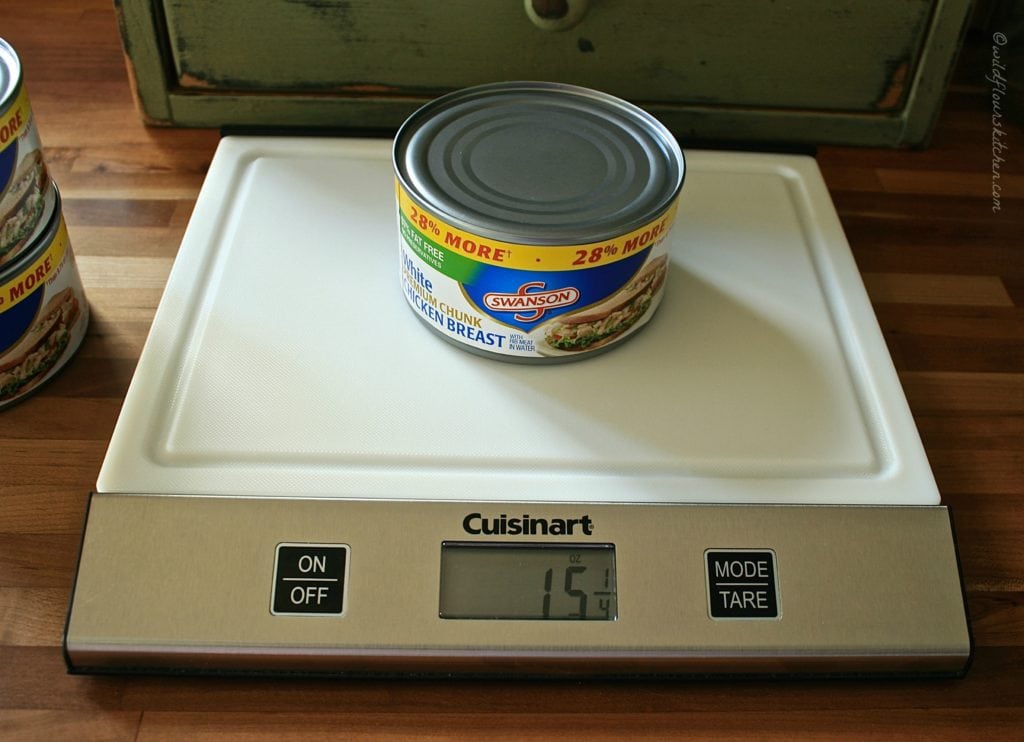 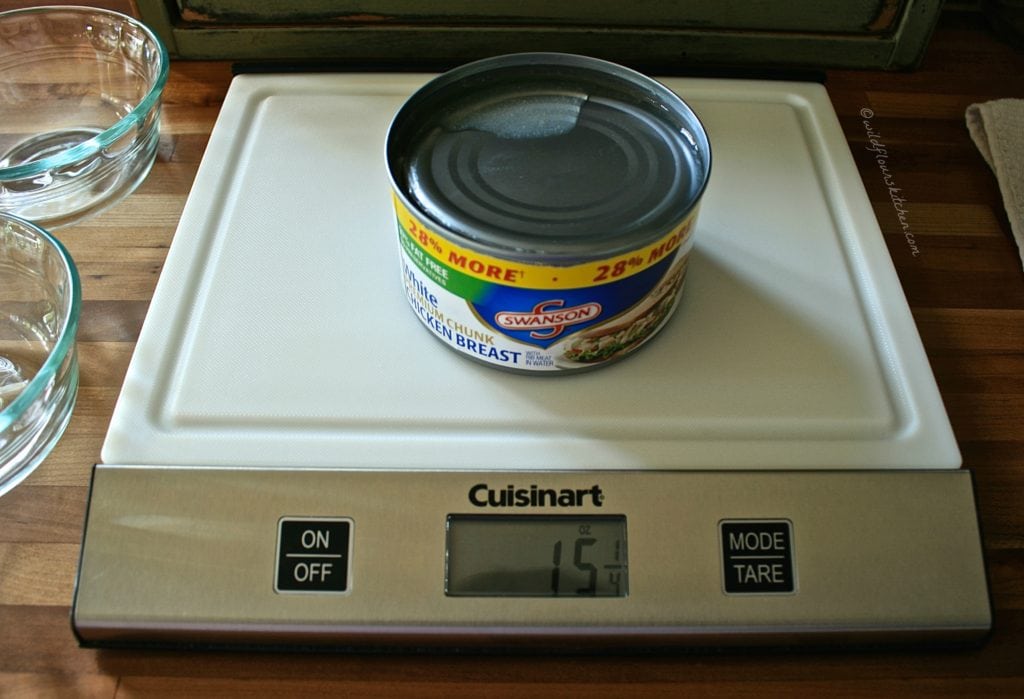 Once the lid is off, this is your first impression of “White Premium Chunk Chicken Breast” (with rib meat in small print next to it).  Maybe they could use a few lessons on presentation from tuna companies…. 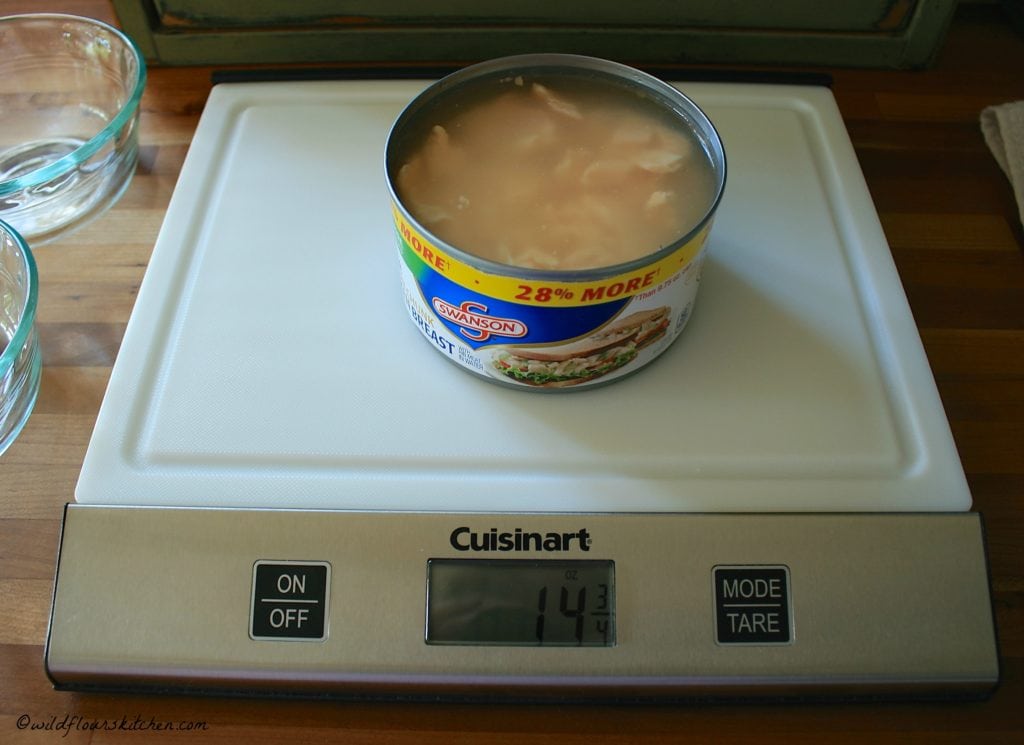 I placed the lid back on, drained the water into a bowl, and set both back onto the scale to show that everything is correct. (*I did start by taring – in other words removing – the weight of the bowl).

Looks like a lot of juice, doesn’t it? And the lid is now past halfway down into the can!

*Note: I only pressed the lid into the can to drain the liquid. Had I drained the initial liquid into the bowl, then added the meat into a lint-free towel and squeezed it to drain (over the bowl), the results would’ve been even worse. But I did the experiment as a regular consumer would have. 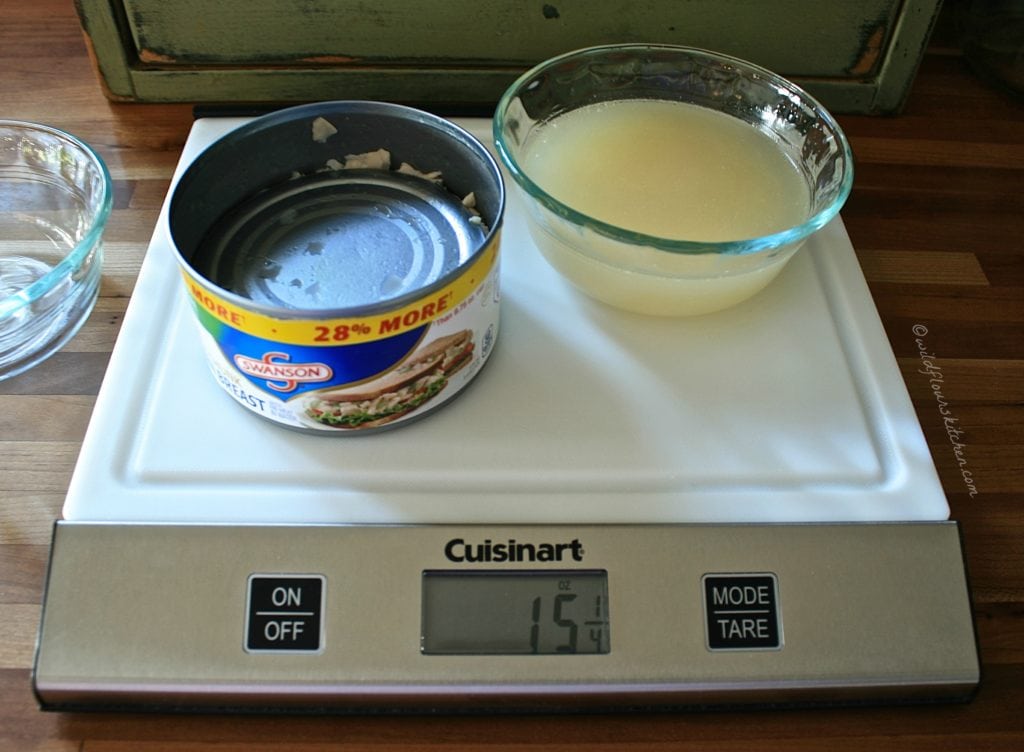 Here is the weight of the juice by itself….. 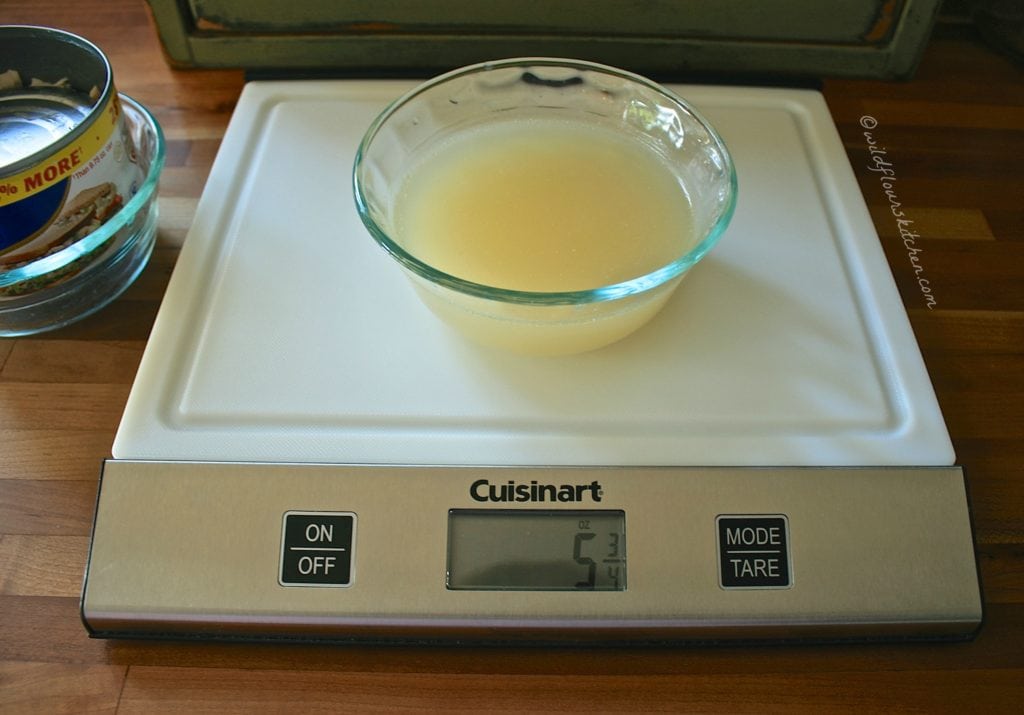 And here’s the weight of the chicken meat by itself…. 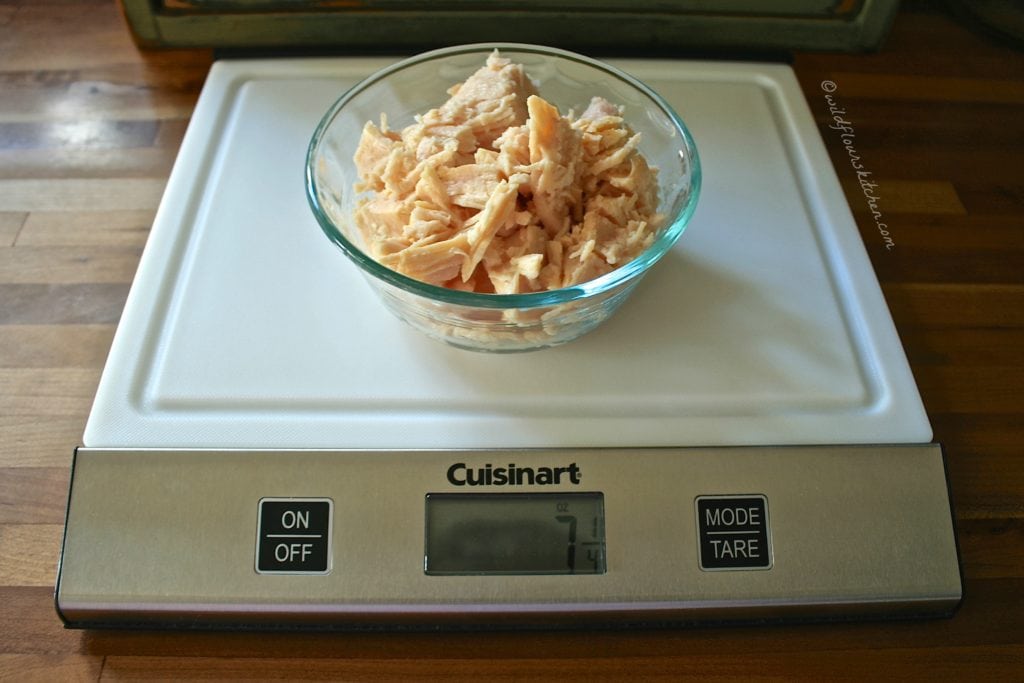 …. 7 1/4 ounces. Wait…WHAT?? According to the can, it clearly says on the back that a serving size is 2 ounces and that there are about 5 servings per can. According to MY First Grade math, that would be 10 ounces, would it not?

Here is what is says on their can….. 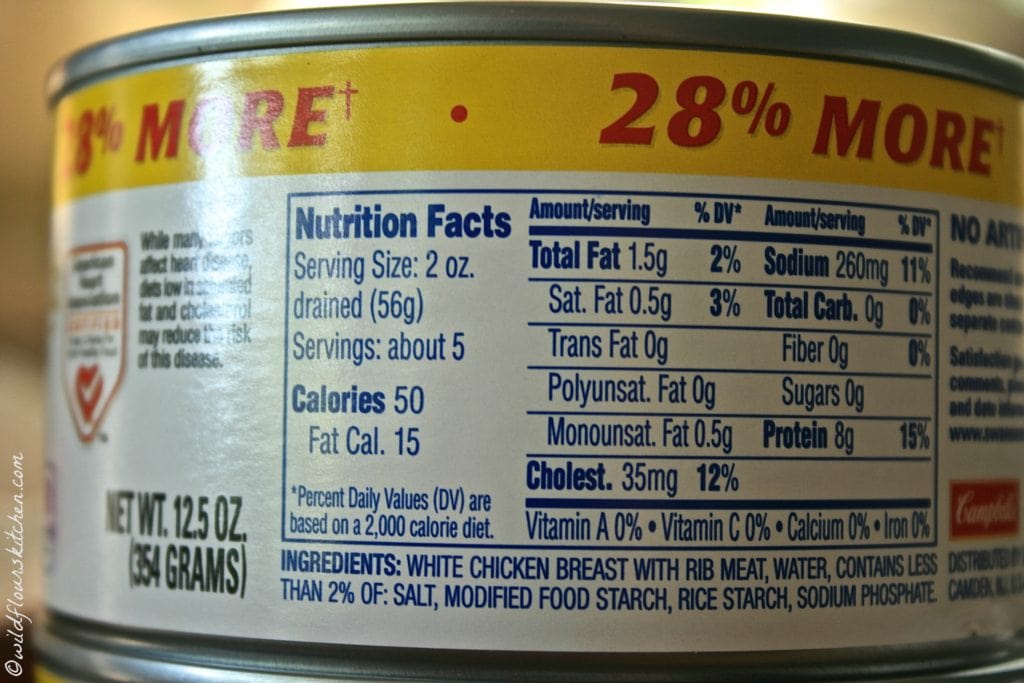 Shorting people also means shorting recipes. Could you imagine trying to make standby baking recipes with a can of, sayyyyyy, sweetened condensed milk for example, and all of a sudden there’s 27.5% LESS than what the can says? Yea. I don’t care what it is, big corps have an horrific reputation as it is concerning greed. And they have a responsibility to honesty. I hope Swanson hears this, and finally just comes clean and does the right thing.

So, anyways, since I was going to come up short of chicken, (as compared to the amount that I get when I make my Old Fashioned Tuna Macaroni Salad), I had to make up the difference and add in extra ingredients that I hadn’t planned on using! There goes our “Cheap Night” meal for the week!

But this salad turned out, in the end, very well. (How was it not going to end up over-the-top with added bacon and expensive cheese added in??) But happy with what it ended up being!

We have always bought these cans, mostly for my hubby, so when my health problems get in the way of our daily life, he has something simple that he can whip up himself. Which is usually the drained, canned chicken mixed with a glob or two of mayo, and a little salt and pepper for a basic chicken salad. He used to get 4 sandwiches out of one can and had something quick and easy to eat that he could handle making without my help. These new, “bigger” cans made only 2 1/2 sandwiches. We have no problem with the product itself, it has helped us out many times during health and medical crisis when we’ve needed it. But we just can’t continue to purchase this product in good faith anymore until they have in the can what the can says they do. After battling them for 2 months, we’re done.

So, welp, you have two options. You can either use leftover cooked chicken, rotisserie chicken, or stew or grill a chicken breast, and medium-shred the meat. Or, you can use canned chicken. I’d just shop wisely if taking Route 4. 😉

I DO hope that you enjoy the salad as much as we did, though! It really did turn out very flavorful in the end!

Just. Buyer beware. From the little mouse that roared. 😉

UPDATE!!!!! *This has been added to this blog prior to publicizing.
Here is a picture of their, not one but TWO, old “9.75 ounce cans”,
compared to their newest one.
LOOK AT THE BACK LABELS!!!
Yep. They lied.
The SAME AMOUNT is in the old cans!!
And they changed the serving sizes over time!!
They can try and lie about drained vs. undrained,
but the water isn’t supposed to be legally included in the serving size.
Even if it was ok, the SAME EXACT fat and cholesterol Nutritional Facts
are the same between the “oldest” and “newer” cans.
So they can’t lie about it that way then, either.
On the “newer” can, it’s the SAME AMOUNT as the “newest”!
How does that, plus water, even fit into a 9.75 ounce can.
Obviously there’s less meat than what they said even back then. 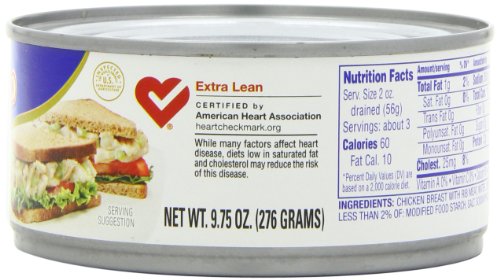 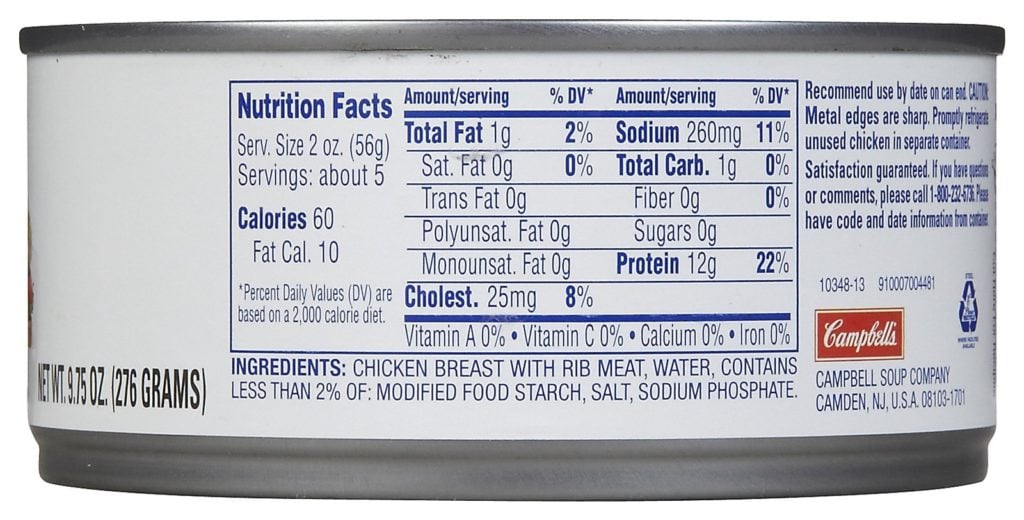 *And just a bit of trivia: A 12 oz. can of Bumble Bee White Albacore Solid White Tuna (just a half an ounce smaller than Swanson’s cans of chicken) claimed their drained weight of tuna in their cans to be 9 ounces and it was spot on! Yay for Bumble Bee! 4.5 servings of 2 ounces each. At least they are completely honest and you get what you pay for. 😉
**And yes, if you don’t care for chicken, you can most definitely substitute a can of tuna.


*Disclaimer: I was not sent product to try. The review of this product is mine, (as well as my husband’s), own honest and personal opinions of this product, and is in no way intentionally malicious towards Swanson nor Campbell’s companies. My findings are factual, honest and correct. My experiments that I conducted were consistent, and produced the same exact results, all 4 times en total over a 2 month time period.