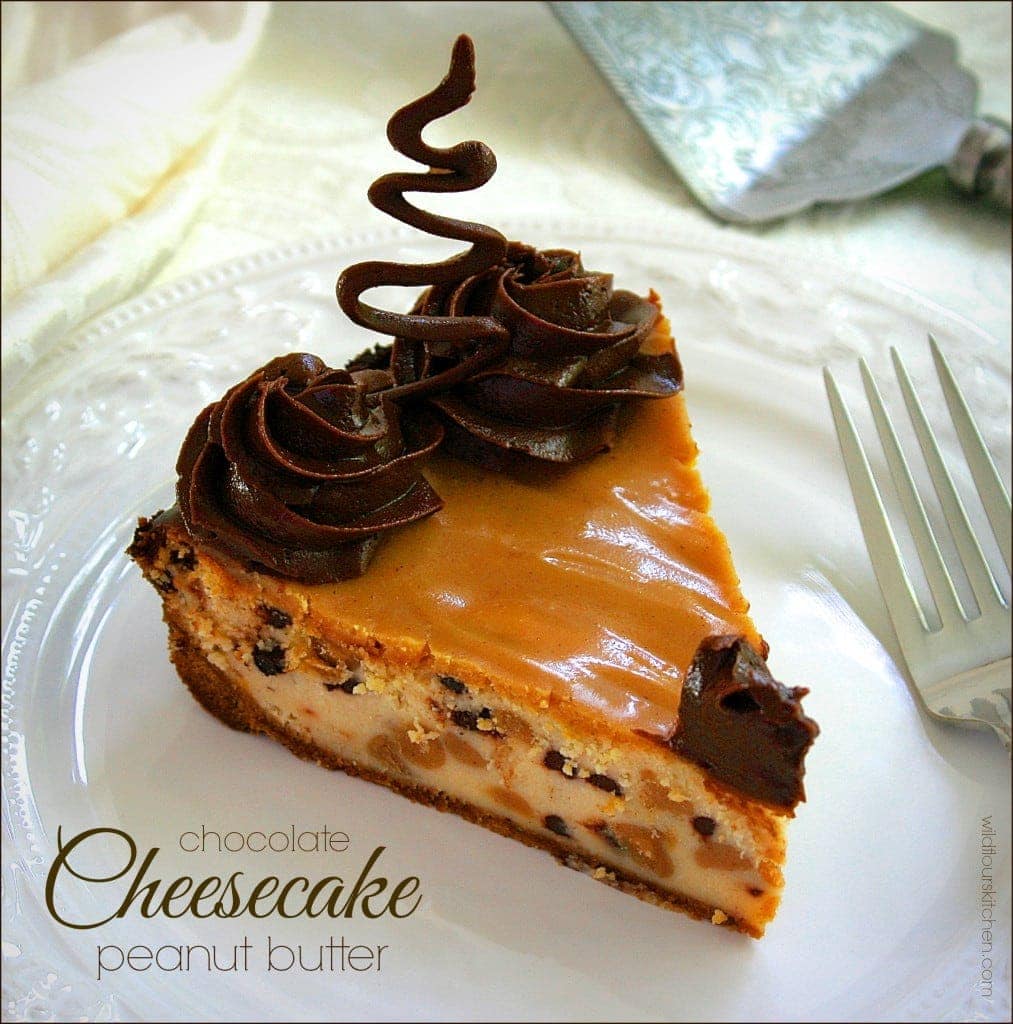 I didn’t know whether to laugh or cry when I downloaded these photos. So I decided that life is unexpected, sometimes with a silly sense of humor, and told myself to just laugh and move on. Does that not look like a mouse or what?? Very funny. Ha. Ha.

A professional photographer/food stylist I will never be! It seems no matter how hard I try, something always goes wrong. And this day was a very difficult one to get through all the way around. It was hot. I mean HOT hot. Like 95 degrees hot AND humid. 90%+ humidity! The heat doesn’t really bother me anymore, not like it used to, and we’ve almost done completely without the A/C on at all this summer. I’m actually proud of my hubby and I for that! But the humidity can just plain be nasty disgusting. That is a whole ‘nother monster.

So stubborn me kept the A/C off. Not the wisest decision. But stubborn is as stubborn does, I guess! So I set out to make a cheesecake. I knew getting there would not be a fun journey on a hot day, but the cool and creamy destination would be well worth the trip! 😉

I love to make up different fun cheesecake concoctions, and lately I’ve been on a nostalgic peanut butter trek down memory lane! Every now and then, I just get cravings for plain ol’ PB & J sandwiches, PB cookies, and even just PB on Ritz crackers! So I decided to go all out and do a PB and Chocolate Cheesecake loaded with lots of goodies and surprises! 😉 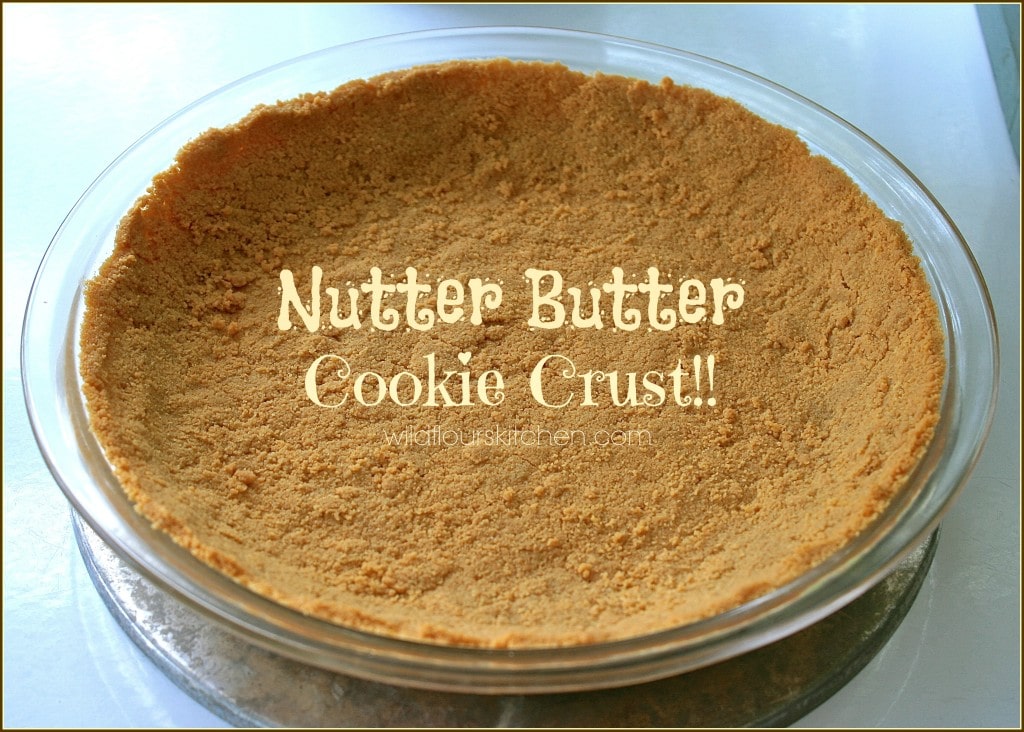 Starting right off the bat with a Nutter Butter Peanut Butter Cookie Crust! 😀 I drug out the food processor, whirled the broken up cookies until nice fine crumbs, drizzled in some melted butter and wah-lah! 😉 Homemade crust! The above photo is after baking and cooling. It came out perfect! Confidence was high! 😀 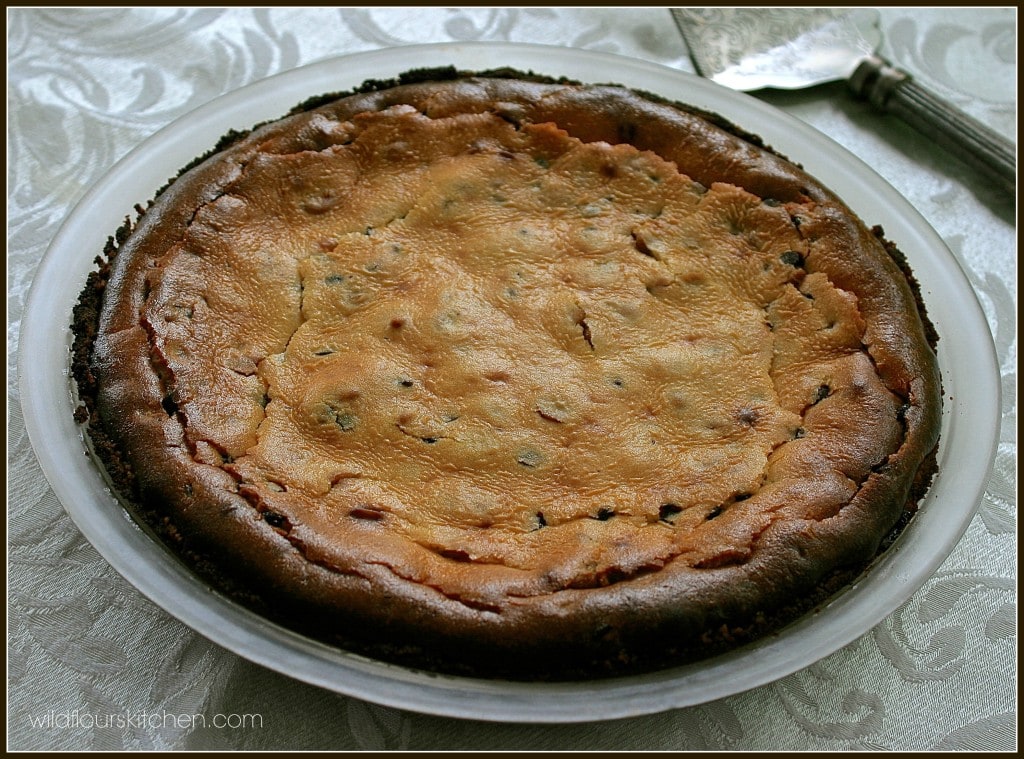 I was really working up a sweat so I cracked a beer to cool down a bit! 😉 I checked the pantry and had some mini chocolate chips left over from the holidays and a completely unopened bag of peanut butter chips! So in went some chips! I saved the rest of the PB chips for later. 😉

But I didn’t stop there. I was starting to get a little edgy from the heat, so I got into the liquor cabinet. 😉 I thought a little splash or two of some nice liqueurs would be fun! 😀

So in went some hazelnut Frangelico, and some Bailys Irish Cream! Liqueurs make everything better. 😉

I then poured the filling into the prepared cookie crust that I had made, and realized that I had made too much filling! I was NOT going to just pitch the rest, I had more cookies, so I decided to just make some mini cheesecakes to use up the rest! No biggie. 30 minutes later, angry and frustrated, I sent my hubby next door to see if the neighbors had any cupcake papers after looking in every. Single. Cabinet. Three times.

Definitely called for another beer.

Finally the main cheesecake was baking away in the upper oven and the mini ones were in the lower one. Totally guessing on times and temps, I started to really worry when the main cheesecake looked like the crust was going to get WAY overdone and possibly even burn. Confidence totally deflated. 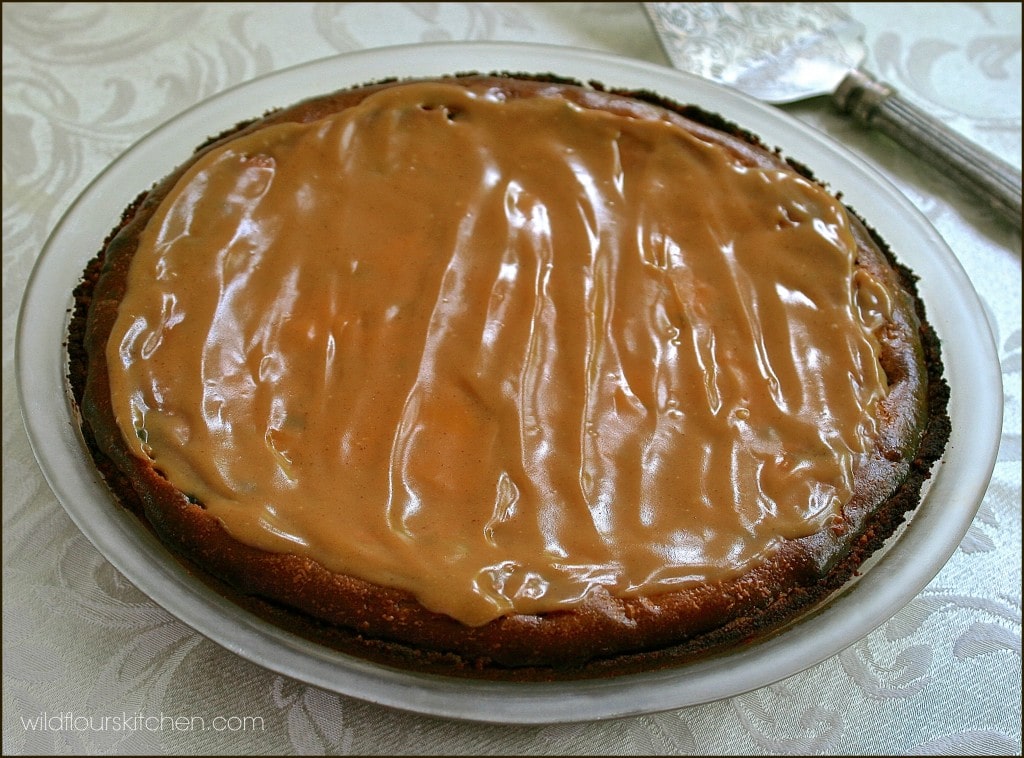 It looked too dark on the very edges and I just hoped that it tasted “toasted” but not burnt. Since it wasn’t one of the prettiest cheesecakes I’ve ever made, (it looked pretty ugly actually), I decided to try to do a peanut butter ganache on top. I mean, if you can make it with chocolate chips, why not PB ones, right?

Luckily it worked! I celebrated my newly renewed confidence with another beer! By this time I was drenched and my clothes were sticking to me. Believe me. I earned it. 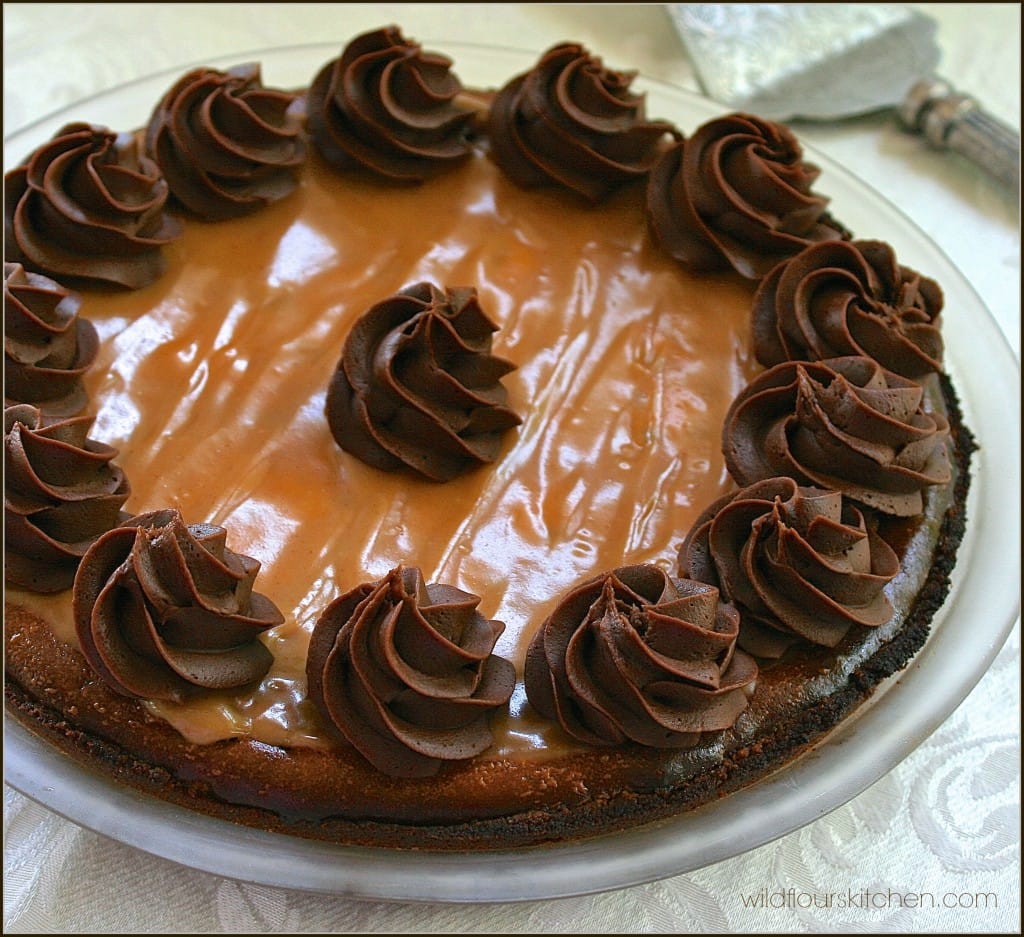 But this cheesecake was still far from presentable. Even to just myself and my hubby! In the back of the fridge, I knew I had some leftover chocolate frosting that already had the same liqueurs in it. I just hoped that I had enough! I lucked out a second time. 😉 Chocolate frosting fixes everything. 😉 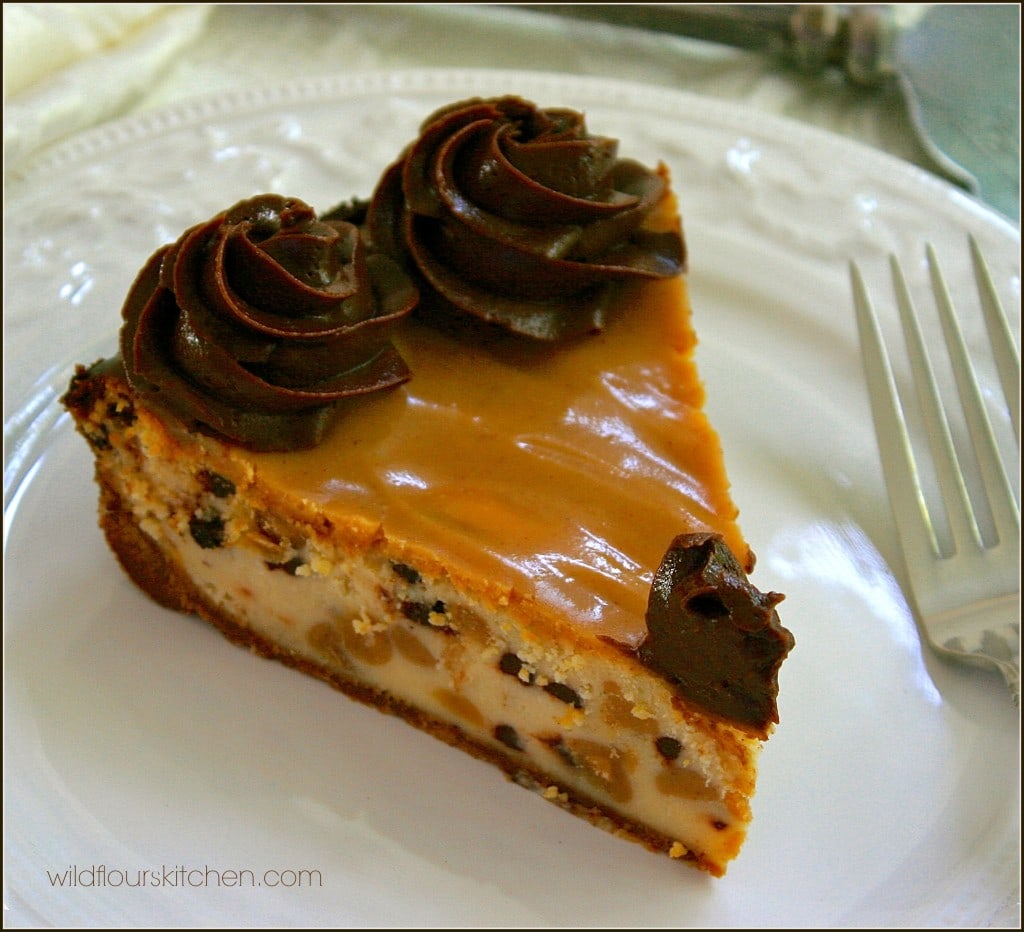 It seemed to still be missing something, though. By now I didn’t care and was feeling loopy from the heat…or maybe the beer….but I decided to keep going on it. I used the last dab of chocolate chips, melted them in the microwave in a little freezer bag, snipped off the corner and piped some squiggly lines onto some parchment paper. And into the freezer they went! I knew that they were going to have to be ICE cold to hold up long enough to try to get a photo as quickly as possible before they’d melt like me! I was turning into a puddle!

I made enough to decorate every other swirl of chocolate frosting plus one in the middle! I planted the first one smack in the middle and went to take a photo. The chocolate squiggle starting melting immediately. Obviously my plans of decorating the whole cake was not going to happen. But I did manage to get ONE to stand up long enough on a slice to get a single shot! 😉 The rest went back into the freezer to be used for another adventure. On a MUCH cooler day. 😉

So four beers later, totally soaked and slightly tipsy, I emerged from the kitchen to show my hubby what all the fuss was about! I just hoped that the crust didn’t taste burnt and the cheesecake was ok!!

Alls well that ends well! Everything was DELICIOUS!! The crust had no burnt taste at all, the cheesecake wasn’t overdone on the edges, the flavors were incredible, and even the ganache was wonderful! Even the mini cheesecakes turned out! WHEW.

But NEVER again on such a hot and humid day! Not just one oven on – – but TWO??! I don’t know what I was thinking.

You all have a wonderful day, and I’ll see you next week! Have a great weekend! 😀

Every year I make a cheesecake to take to a super Bowl party. Everyone always looks forward to what new recipe I find. So I saw the ingredients and was excited. Once I read the recipe I made some tweaks. I have only ever made cheesecakes in Spring Form pans so i used more Nutter Butters for the crust with more butter and put in the bottom and up the side of the pan. i made the recipe based on the instructions. the only thing I did different was just took the melted chocolate and made designs on the top of the ganache. I was told it was the best cheesecake they had ever had. It was delicious. Thanks!

WOW Kelly, that looks super duper fantastic! I never thought of a nutter butter cookie crust before, awesome idea! I totally love the chocolate squiggle thing on the top too. B-E-A-utiful! :)

Bless your heart!!! :D Thank you, Dana! You can use just about any cookie you like for things like this. Store-bought or homemade! "Nutter Butters" were easily decided upon for this, though, because they're one of my hubby's FAVES! :D

Whatever you do, don't cry! ;) This looks gorgeous, and I want a slice for breakfast!!