‘Twas a dark and stormy afternoon, and nothing else to do but….bake! I love to scoot out to the kitchen when day turns to night and I have all of my little “pretty lights” on, wearing my over-sized pink-T and pj bottoms, and a basket full of fresh summer peaches are waiting to be made into something warm and comforting!

I decided a nice pan of old-fashioned peach cobbler was just the ticket! Little did I know, a mystery was about to unfold! (Lightning and thunder in the background.)

First, I could not find my 8×8 pan. It seemed to have disappeared! I had to use a slightly bigger pan and make just a little more…and there seemed to be “extra peaches” than what was on the list. Hmmm, was someone trying to tell me something? Was this all part of some evil plan?

So I peeled extra peaches, found a nice-sized dish and made a little extra batter. Melted butter on the bottom, thick cinnamon-y batter next, then chopped peaches that macerated in sugar and more cinnamon, drizzled with a little of the sugary syrup from the bottom of the bowl and popped it into the oven to bake.

The aroma wafting through the house was drool-worthy! But that wasn’t the only thing in the air, there were TWO storms brewing, I was sure of it. (More lightning and thunder crashing.) When the cobbler was done and a golden crust had risen up through the peaches I set it on the counter to cool. There was a pretty piece of peach that had popped up and I was so happy as it would look really nice in the photos soon to come. 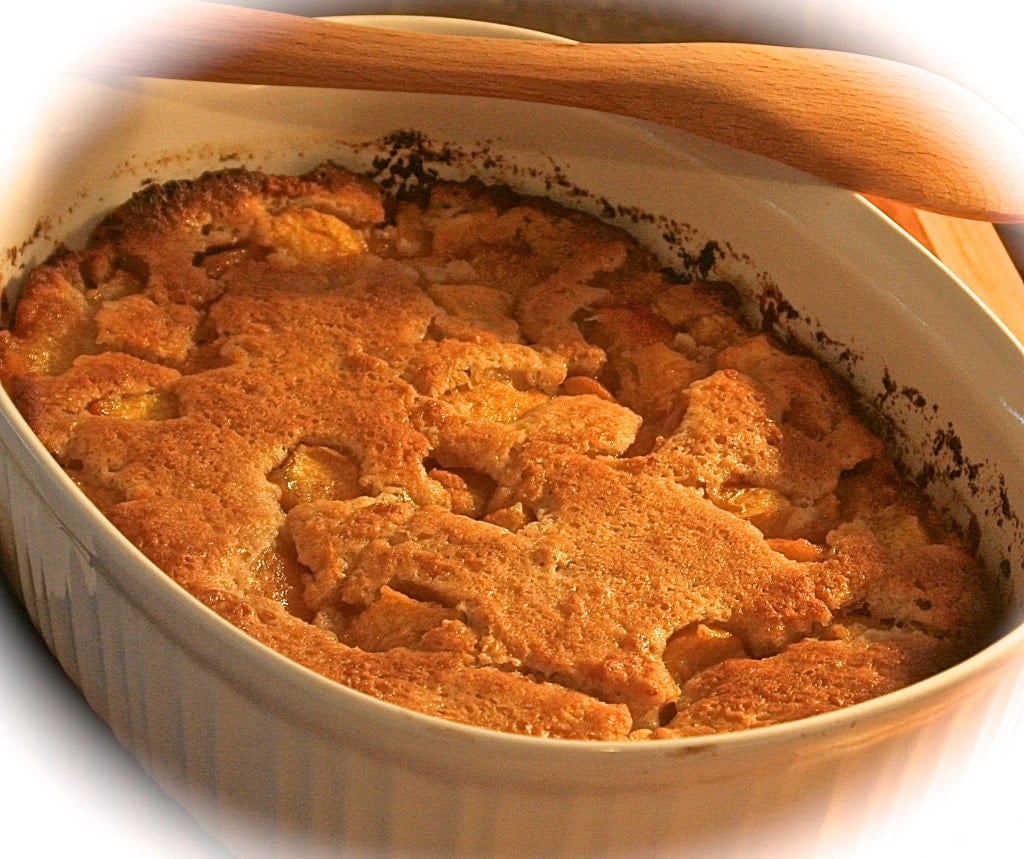 I caught up the dishes and mess, went to fluff the laundry that I had forgotten in the dryer, and returned to find…that the piece of peach had vanished!! (LOUD thunder…) It was gone! What could have happened??

No matter. While still warm, I wanted to fix my hubby a nice helping and when I turned to get out a dessert plate, there was a plate already out…a BIG plate!! Where did this come from?? I didn’t get this out! Wait, was that the wind?? I thought I heard a voice whisper, “It’s all in the master plan…muahahahaha….”  (Flash of lightning and rolling thunder.) 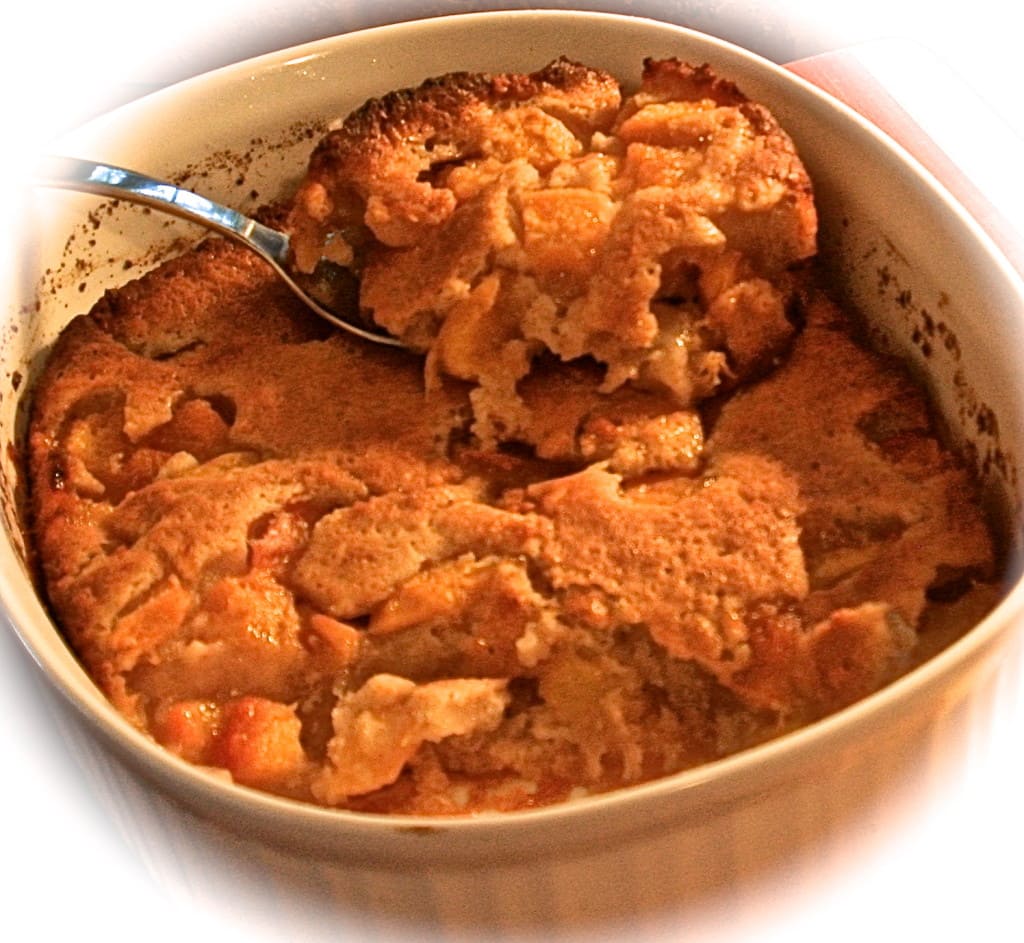 Ok, something fishy is going on here! And this storm is getting spooky! I quickly dished up a nice, BIG, helping… 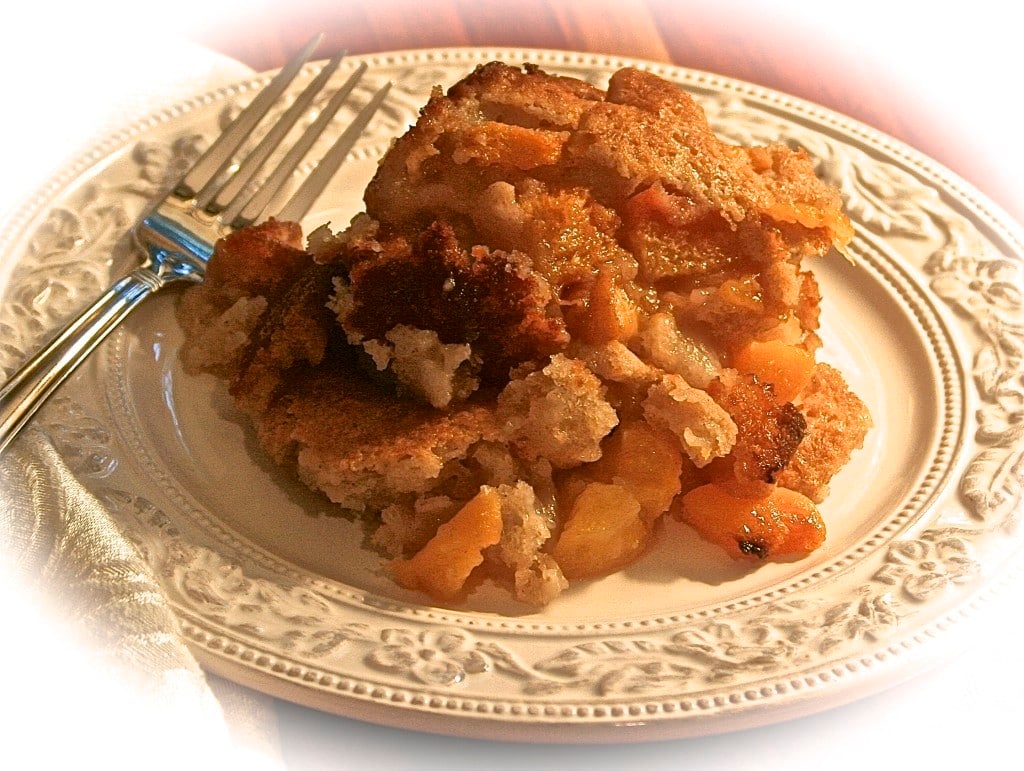 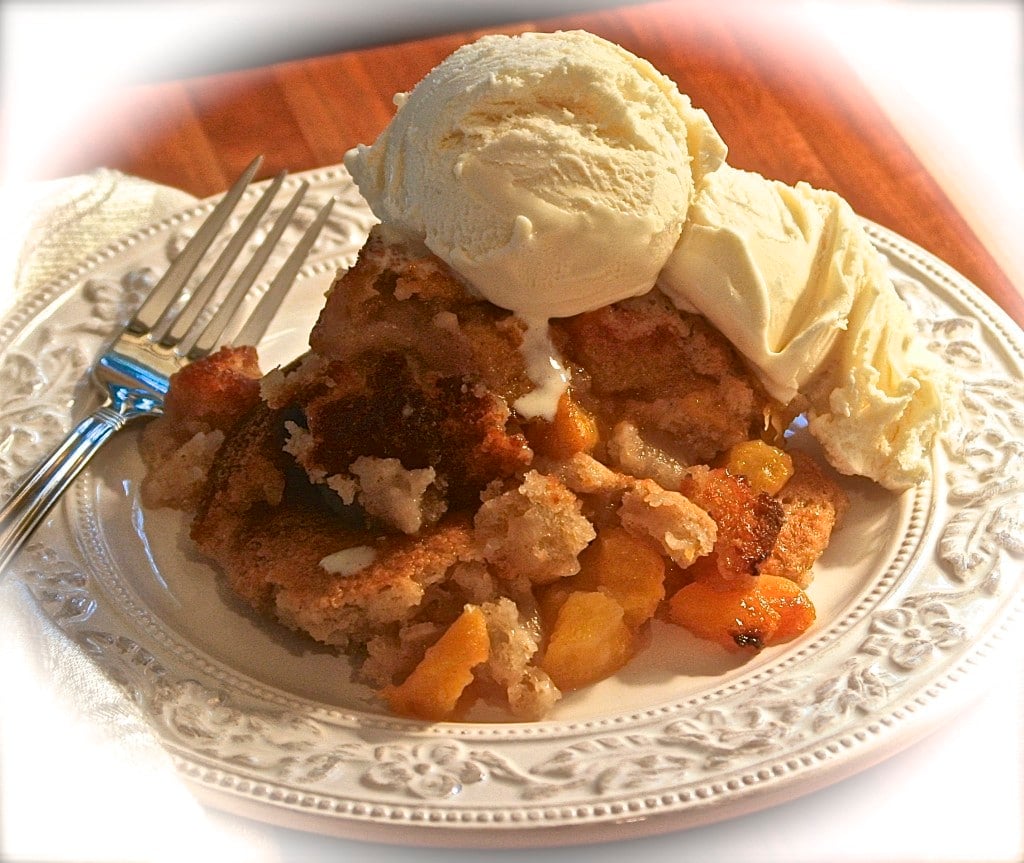 …and took the still warm peach cobbler to my anxiously awaiting hubby. I went and tended to the laundry before it shrank to fit a Barbie doll, and when I returned…THE PAN WAS EMPTY!!! (LOTS of lightning and big crash of thunder, lights flicker.)

Every last morsel, except for a small ring of sugary crust!

What happened?? How could this be?? Who kidnapped my cobbler?? Help police!!! There’s been a murder….or there was GOING to be one soon! ( 😉 )

After hours of interrogation, the evil plot unraveled and my hubby confessed to his whole evil plan.

HE bought the extra peaches, hid my smaller pan,  snitched the pretty peach, got out a bigger plate, and, finally, snuck into the kitchen while I was folding clothes and murdered my cobbler, eating every last bite to dispose of the evidence.

Have a great day all, and remember, never turn your back, even for a second, when you have a homemade peach cobbler on the counter. Yours just might vanish, too!! 😉

4 large peaches, peeled, pit removed and cut into chunks (5 if your peaches are really small)

In medium bowl, toss peaches with sugar and cinnamon, set aside.

In an 8×8 dish, melt stick of butter in microwave until just melted.

In another medium-sized bowl, whisk flour, sugar, baking powder, salt and cinnamon until well mixed. Stir in milk and vanilla until just combined but still a little lumpy. *Don’t over mix. Pour batter evenly over melted butter. (It will look messy and there will be butter on top.)

Stir peaches and sprinkle them evenly over batter. Drizzle a few spoonfuls of any sugary syrup from the bottom of the bowl. *If there’s a lot from very ripe peaches, don’t use it all. Just a couple of spoonfuls is all it needs.

Bake at 375 degrees for45-50 minutes until top is done and golden. Let rest 5-10 minutes and serve warm with vanilla bean ice cream if desired.