Kept simple to let that gorgeous, juicy, tender, smoked beef brisket shine through, these Smoked Beef Brisket Tacos will be the star of the summer barbecues!! Just the right amount of toppings with a surprise sauce, topped with a peperoncini pepper, and all wrapped up in a charred, soft tortilla! Summer taco perfection!

I’ve been pretty bummed this summer, for many reasons, but the last straw was when my Char-Broil vertical electric smoker…DIED. And since it was 2 years young, you guessed it, it was, oh, well kid. Too bad.

So, I was looking at the entire summer of smoking ideas with no smoker. YEP.

Soooo, we had heard of a new food truck in our area called Big Barlow’s BBQ, and decided to check it out. And so glad that we did!! I made some wonderful Cheesy Double BBQed Pulled Pork Totchos with some of the smoked pork that we purchased, and next up was the best, the beef brisket leftovers!

We were both dreaming of tacos, and it could not have been a better idea!

Since brisket is expensive, and takes a very long time to smoke and should be appreciated, I decided to keep these tacos SIMPLE, as to not drown and smother that exquisite beef! And what I added, could not have been better!

So, you can either make these from your own smoked beef brisket, or hunt down a food truck, or even purchase some from your local Costco or barbecue joint! Where there’s a want for beef brisket, there’s always a way!

So, to make these quick and easy tacos, we start with flour tortillas. I charred mine right on the stovetop on my gas burner, because the weather was off and on storming, and getting struck by lightning didn’t sound like very much fun to me.

I warmed the leftover brisket in the microwave after first sprinkling the slices with a little spritz of water, and covered the bowl with a damp paper towel so that it would stay juicy and not dry out.

Brisket slices are pretty big, so I cut them into nice pieces. Each taco only had 2 slices on them, and that was plenty!

So, even though it’s pricy, you can really stretch it out quite far!! And totally worth it. 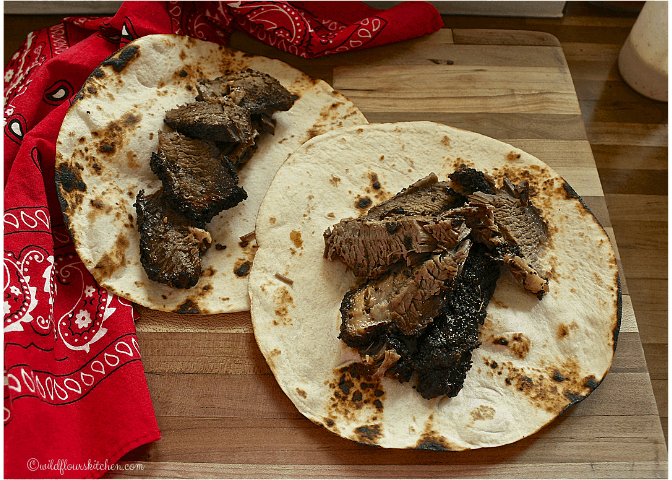 Next, I topped them with a nice spoonful each of guacamole…. 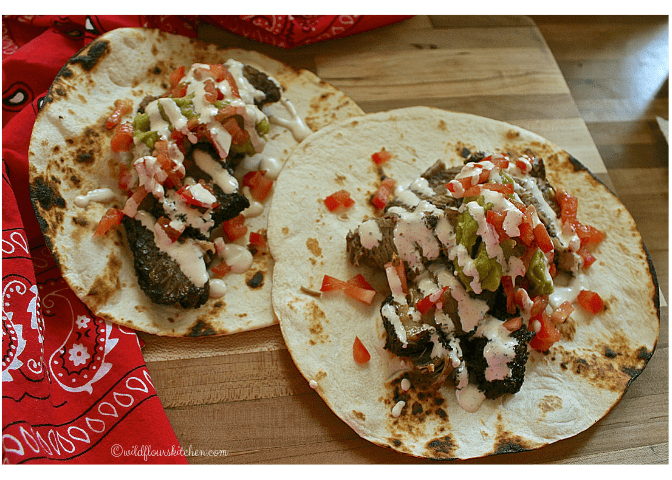 …some diced tomatoes and finely chopped red onion. Then drizzled each one with my homemade Alabama White Lightning Barbecue Sauce! 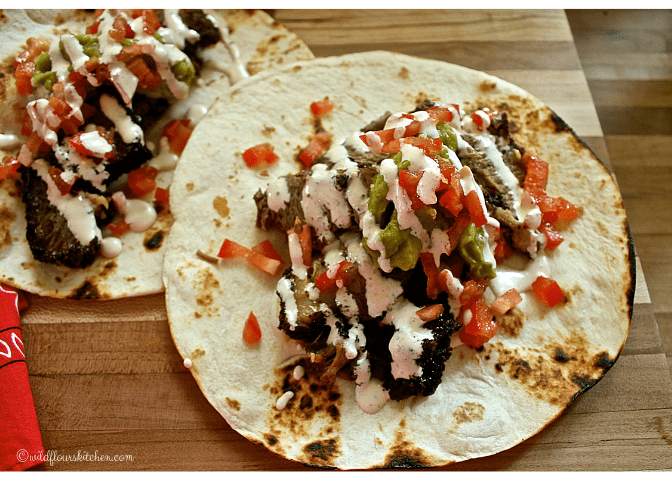 Next, I sprinkled them heavily with crumbled queso fresco since we’re total cheeseheads, tossed on a few peperoncini peppers for a nice change from jalapeños…. 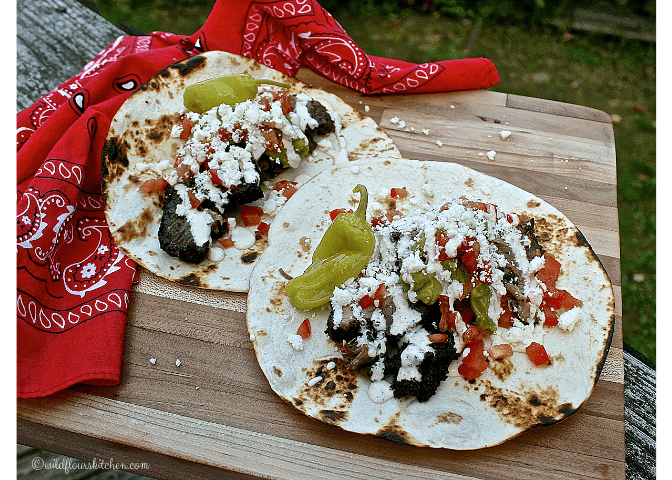 …..and was actually able to head outside, since the storm passed quickly! 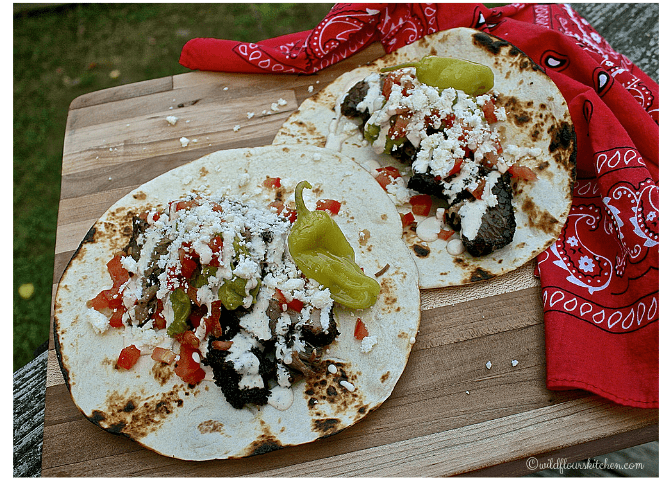 But they looked like they needed one last final touch…. 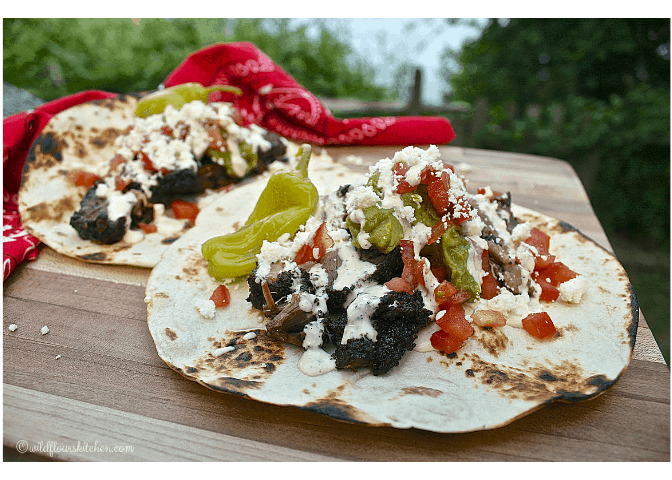 ….just a bit of greenery! 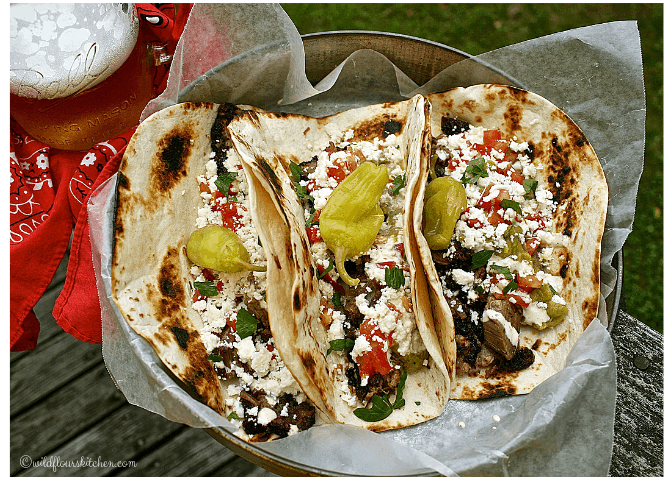 And since there was no longer any worry of getting blown to pieces by lightning, I was able to pick some of my fresh parsley from the deck garden and finish it off with that extra little bit of love! 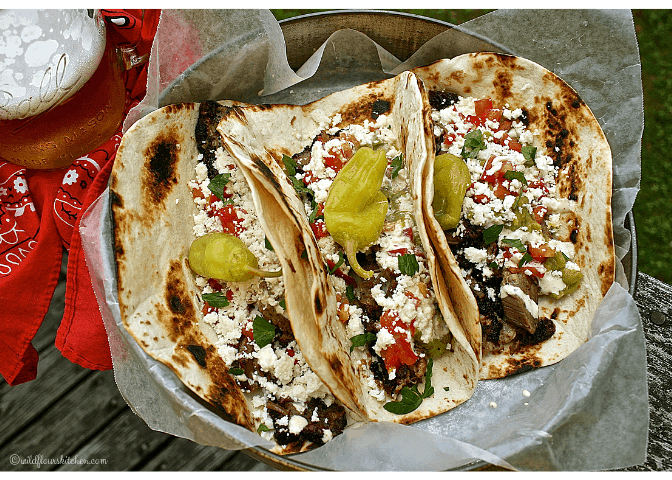 You can of course use cilantro if that’s your thing. But my hubby and I both don’t care for it. It’s a a tastebud thing. No offense, cilantro!

These simple tacos were absolutely the BOMB. The beef brisket came shining through like the star it was meant to be. The minimal fresh toppings worked beautifully, and I’m so glad that I didn’t add any lettuce! (We both decided that lettuce would’ve actually been a bit odd for these.)

And, of course, my homemade Alabama White Lightning Barbecue Sauce went with this perfectly, too. (Is there anything that this sauce doesn’t go with?)

The crumbles of creamy, salty, queso fresco is a must! This isn’t a taco that would very much like cheddar. And those peppers! Fantastic with any beef!

So, even if you don’t have a smoker either, that doesn’t mean you can’t enjoy a street-style Smoked Beef Brisket Taco, too! Just keep it real, and it will be one of THE BEST tacos you’ve ever tasted! Enjoy!!

Make a batch of my Alabama White Lightning Barbecue Sauce, funnel into a plastic squirt bottle, and let mellow out and chill in the fridge for at least one hour.

Heat grill to high heat and char tortillas on each side. Or, you can simply char each side on a gas stovetop burner.