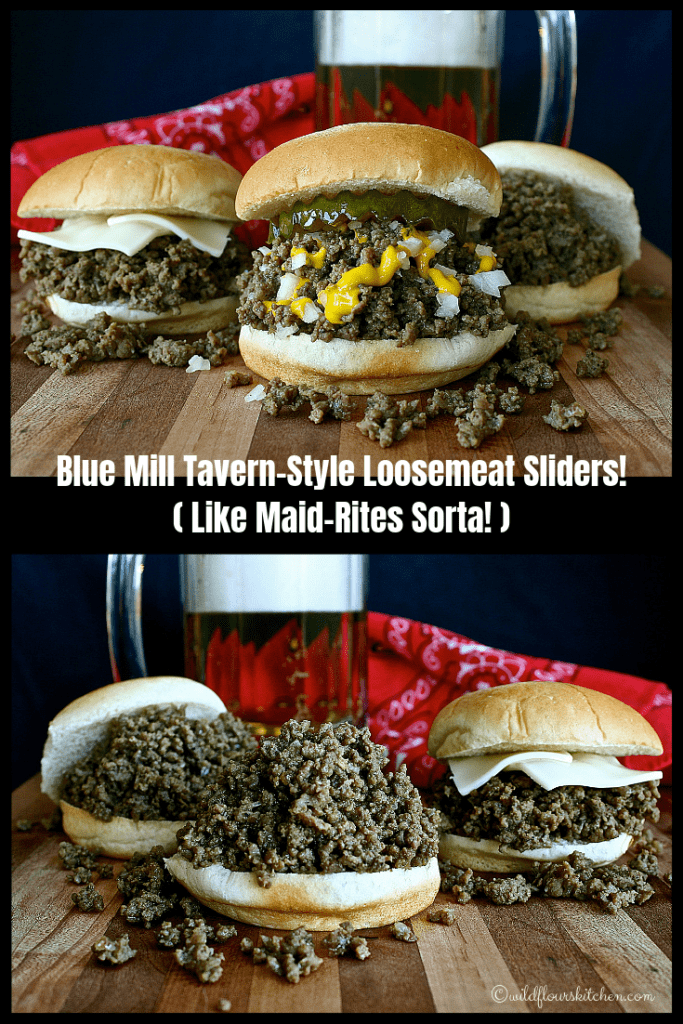 If you’ve never had a “loosemeat” sandwich, you are truly missing out! It’s a midwestern fave that is “as simple as it gets” sandwich, that you would never believe could taste just soooo, stinkin’ GOOD! There are two places, (besides home kitchens that have been making them for more than 100 years!), that claim it’s “theirs”.
Read on to find out how this iconic sandwich finally got it’s fame!

Firstly, just to let you all know, a “loosemeat” sandwich is simply ground beef that has been cooked and broken up into VERY small pieces, and then served as a sandwich on a slice of bread or between a soft roll.

Originally, it was seasoned with nothing more than just salt and pepper, and sautéed until it was broken up into very small crumbles, then braised in plain water. The only seasonings were the very basics, salt and pepper. That was it.

And, originally, it was spooned onto a piece of soft white bread, which was then folded in half, and eaten just as is!

Later came the condiments just as simple. Chopped onion, and mustard and a slice of cheese if you were fortunate enough. Pickles, if your family canned them from their own garden.

Depending on the cut of meat used, even though it was ground, it was sautéed first, then  water was added, and it was simmered down until it was tender enough to eat.

You didn’t just hop on over to the grocery store and pick up a package of hamburger. You had to grind it yourself, which meant, any tougher parts were ground altogether to not have any waste, and needed a little extra-tender care when cooking.

So, really, it was just cooking “hamburger” until finely broken up to provide future tenderness, then really tenderizing it by slow-cooking it, (braising it), in liquid on the stovetop until it was pleasingly tender and edible.

It was called “a poor man’s burger” at one time, but mostly because it went a lot further! One pound of hamburger placed on a piece of soft bread, had the same heartiness, and sure made more than just four quarter pound burgers! Even “open-faced”, it served, at the least, 6!

Both Ye Old Tavern and Maid-Rite in Iowa, claim to be the first, but we all know better from our Grandmothers and Great-Grandmothers! Here’s an article from the Sioux City Iowa Journal if you’d like to read more about the Battle of the Loosemeat Sandwiches!

But today, we’re making neither! We’re actually making one that came about during the 50’s made the Blue Mill Tavern (now closed) that has a bit more flavor, and every bit as good as the “originals”!

So, let’s just get this going, ok? There are hungry kids waiting!!

I started by adding a little salt and butter to my cast iron frying pan. 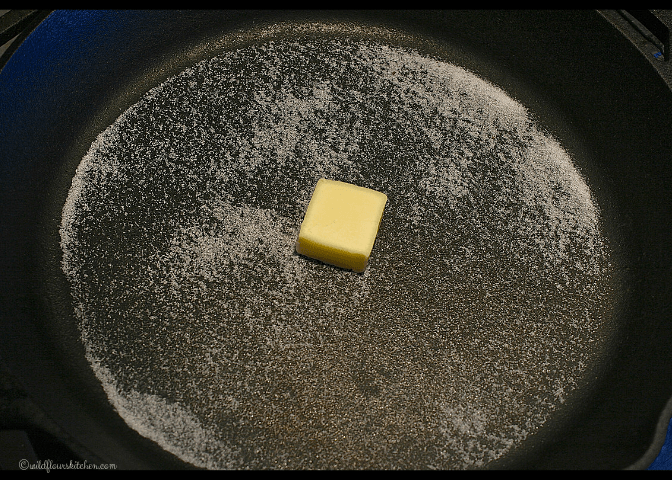 Melt the butter with the salt, break up some hamburger, and add it to the pan.

THE TRICK, listen up, is to keep chopping and mashing, nearly the whole entire time. Yep. This is going to give you a bit of a workout, and remind you how out of shape we are compared to our Grandmas and Great-Grandmas who did things like this every single day. I know. I feel guilty too sometimes, when I take even the littlest of things for granted. 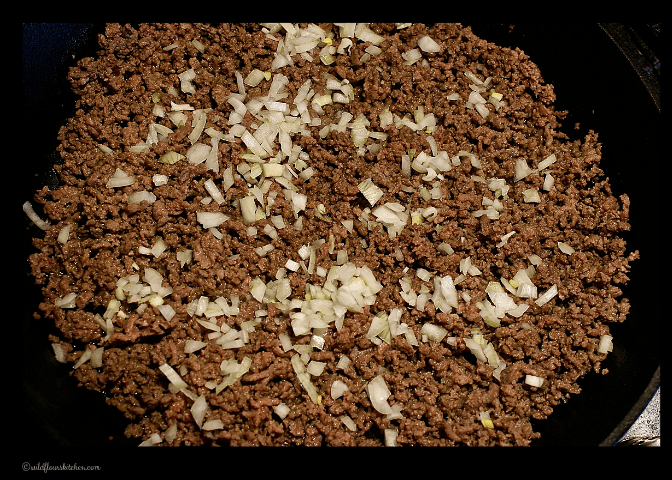 Once the meat is getting fine, and mostly done, add in some finely chopped onion. 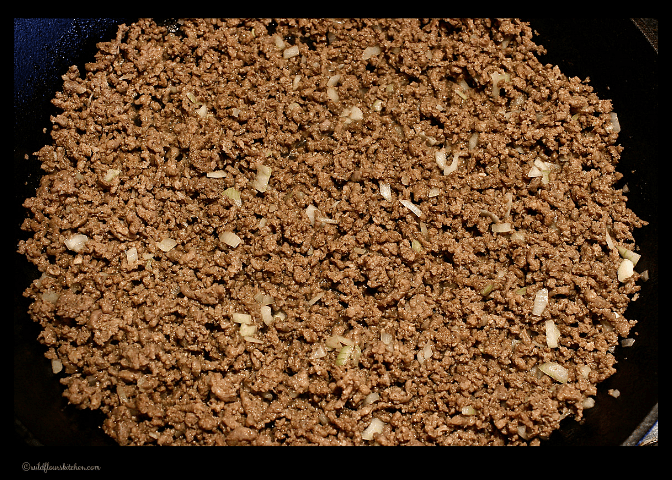 Sauté this mixture until the meat is fully cooked and very finely broken up into tiny crumbles. 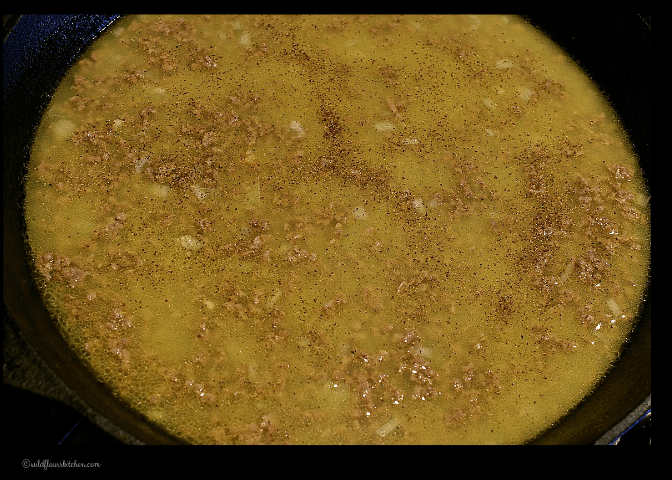 Then add some mustard, vinegar, sugar, and pepper. And lastly add water to just cover the whole mess. 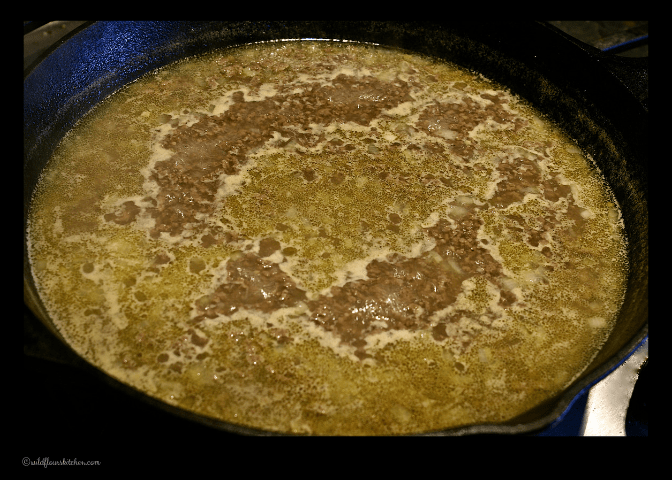 Stir everything in, bring it all to a boil, reduce the heat to a low boil, and cook until all of the water has been completely cooked out. 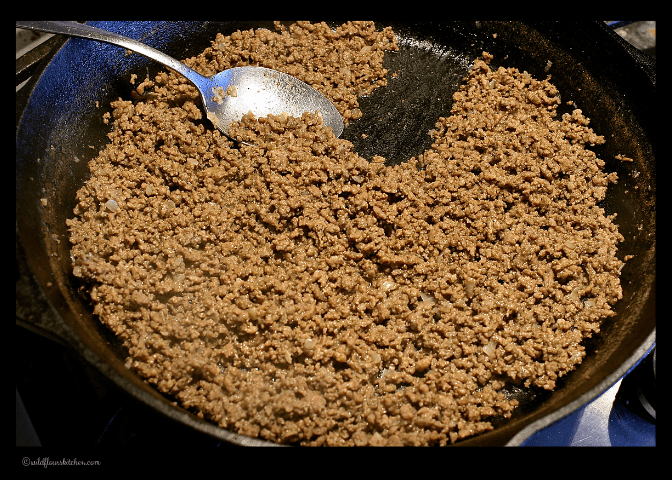 Make sure you stir this now and then, and chop more as needed.

This is best served on soft rolls or hamburger buns that have been steamed. 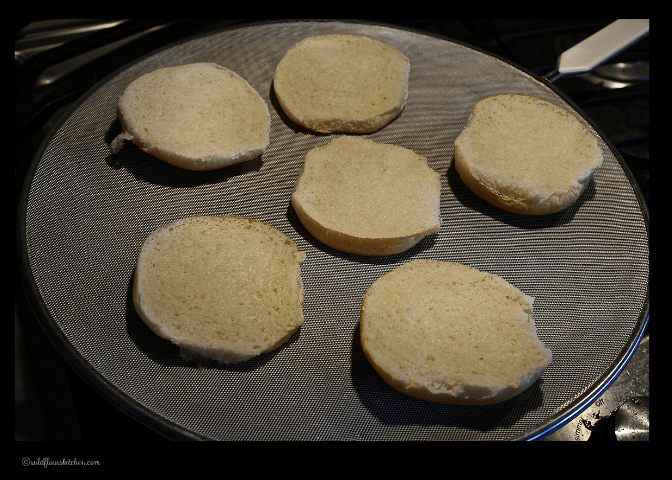 An easy way to do this, is to place a splatter screen over the hot pan, and place your bun halves right on top! The rising heat from the meat will steam them perfectly! 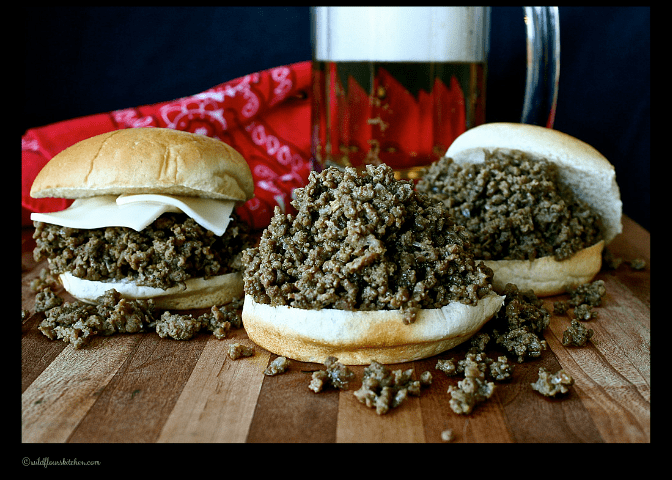 Then, with an ice cream scoop, pile on the meat mile-high! 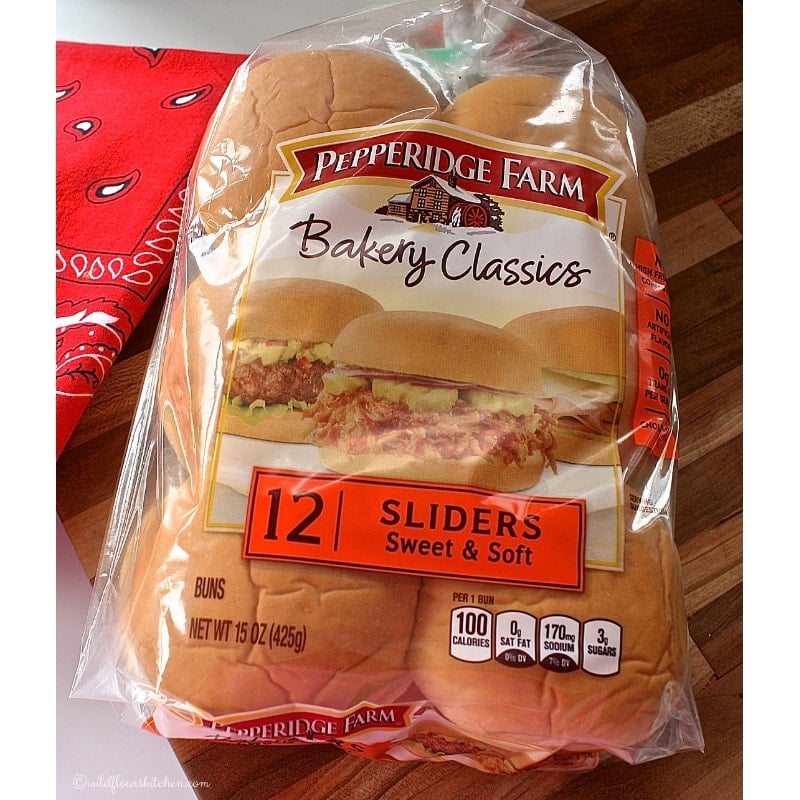 I heaped our mixture onto slider buns, and this worked out perfectly for us! 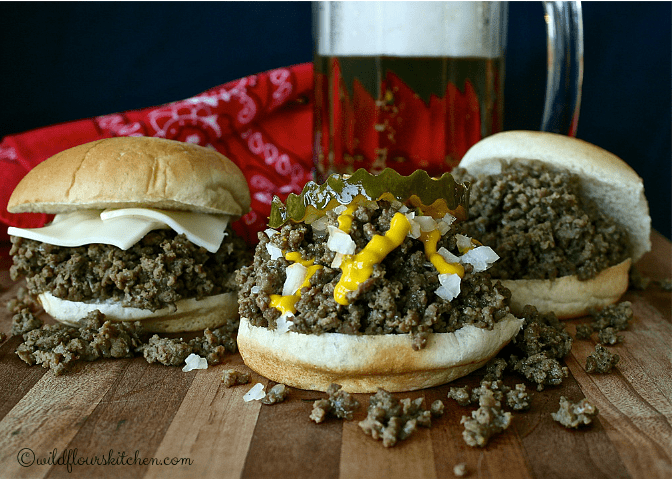 You can serve them plain, with cheese, or with mustard, onions, and pickles to keep them traditional! But if you’d like to add things like jalapeño rings, I won’t tell. But they really are best kept as simple as possible.

And remember……NO KETCHUP ALLOWED. Strict rule for these babies! As ketchup masks the flavor of the meat! 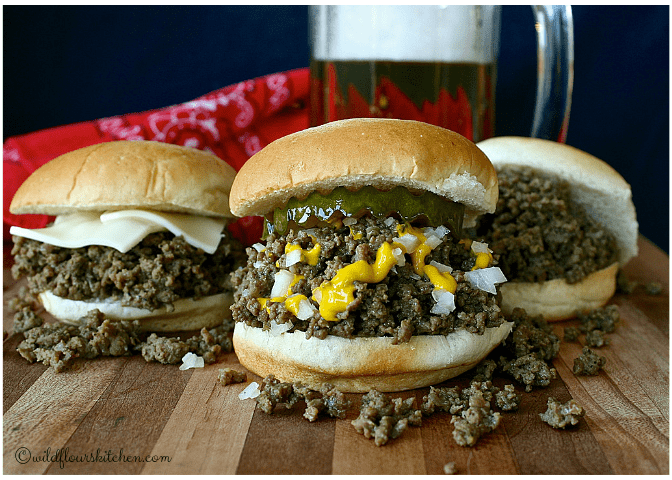 The only thing left to do? Grab some napkins!! And a spoon for scooping the last of the meat from your plate!

If you’ve never had a “loosemeat sandwich”, or have been craving one from your childhood, take a trip down memory lane with this flavorful version!

You won’t be disappointed!

Make a pan of these Blue Mill Tavern Loosemeat Sliders (Like Maid-Rite Sorta) tonight, and enjoy a taste of the midwest!

In cast iron skillet, sprinkle salt evenly across the bottom add the butter. Melt over medium heat, then crumble in your ground beef.

Start sautéing ,break up ground beef by pressing it and chopping it with the back of a wooden spoon constantly! *The meat must end up being cooked into very fine crumbles.

Add chopped onion when meat is mostly done and very finely broken up. Keep working it until the meat is fully cooked.

When meat is browned, drain off any fat by tilting the pan, and scooping out the grease using a large spoon.

Add and stir in mustard, vinegar, sugar, and just enough water to barely cover the meat in the pan.

Bring to a boil, lower heat to a simmer, and cook until the water is completely cooked out, about 30 - 40 minutes. (Longer depending on how much water you added.) But more water, and a longer cooking time, is best.

Taste, and adjust salt and pepper to taste. Turn off the burner.

Steam your hamburger buns by placing them outside-down onto a wire splatter screen placed over the hot skillet, or in the microwave with a glass of hot water. When buns are warmed, use an ice cream scoop to pile a heaping mound of the meat onto the bottom buns.

You can serve them as is, or add finely chopped onions, or melt some cheese placed onto the hot meat, or do as I enjoy, and add mustard, onions, and sliced dill or bread 'n butter pickles!

*DO NOT ALTER this recipe, or you will not get the traditional taste of a midwestern, loosemeat sandwich!