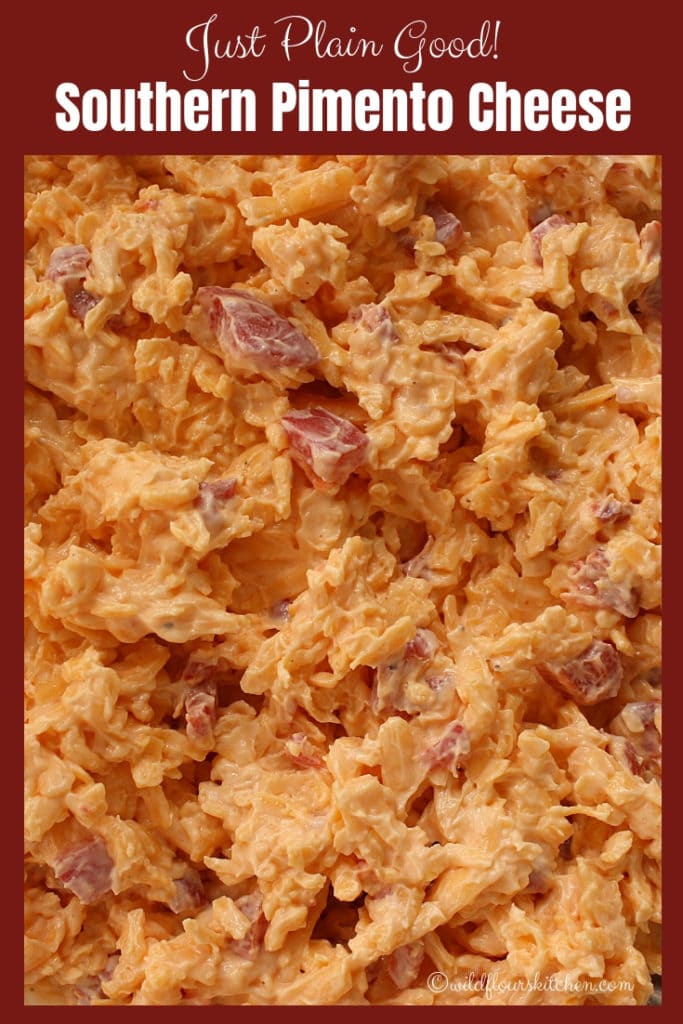 Who would’ve thought, that something so simple that you enjoyed as a child, would make such an enormous comeback? Well, when it’s just that plain good, it never should’ve gone out of style to begin with, I say! Here’s my original-style version!

When I was a little girl, “pimento cheese” was my ultimate favorite treat! My Dad and I used to spread it on crackers until every last bit was gone!!

Be it homemade, like this, or even those cute little jars they came in, didn’t matter, it was good stuff, Maynard!

And I find it rather heartwarming, though surprising to say the least with all of the younger kids wanting “healthy only” recipes and food, that this simple treat has made such a huge comeback!

It even took Europe by storm several years ago, and is still going strong!

Why? Why is this stuff, again, just as popular now as it ever was? Because it’s just plain GOOD.

And it only takes minutes to make using very few ingredients. With that being said, it’s kinda no wonder and a no-brainer.

No fancy pants, hard to find, expensive ingredients touch this recipe. It’s actually best made with a more inexpensive sharp cheddar cheese, than one that is aged.

And this is actually what I use:

The other main flavor ingredient is pimiento peppers. But when referring to the cheese spread, for whatever reason, they are always spelled “pimento”, dropping the second “i”.

Not sure at all why. Maybe it was misspelled and it stuck?? Or maybe it was a specific pepper grown and spelled that way?? We may never know.

All I DO know, is that it’s not only delicious, especially when it’s kept pure and simple and not a whole lot of extra, unnecessary extras are added, but it’s a simple staple that every fridge should own!

Believe me, it’s good just as it always was. Some old recipes are even more simple than mine, and only consist of the 3 main ingredients ONLY!

But I only add a few other ingredients that don’t mask or change the flavor in any way. Just a little bit of this and that, that actually bring out the natural flavors already there. 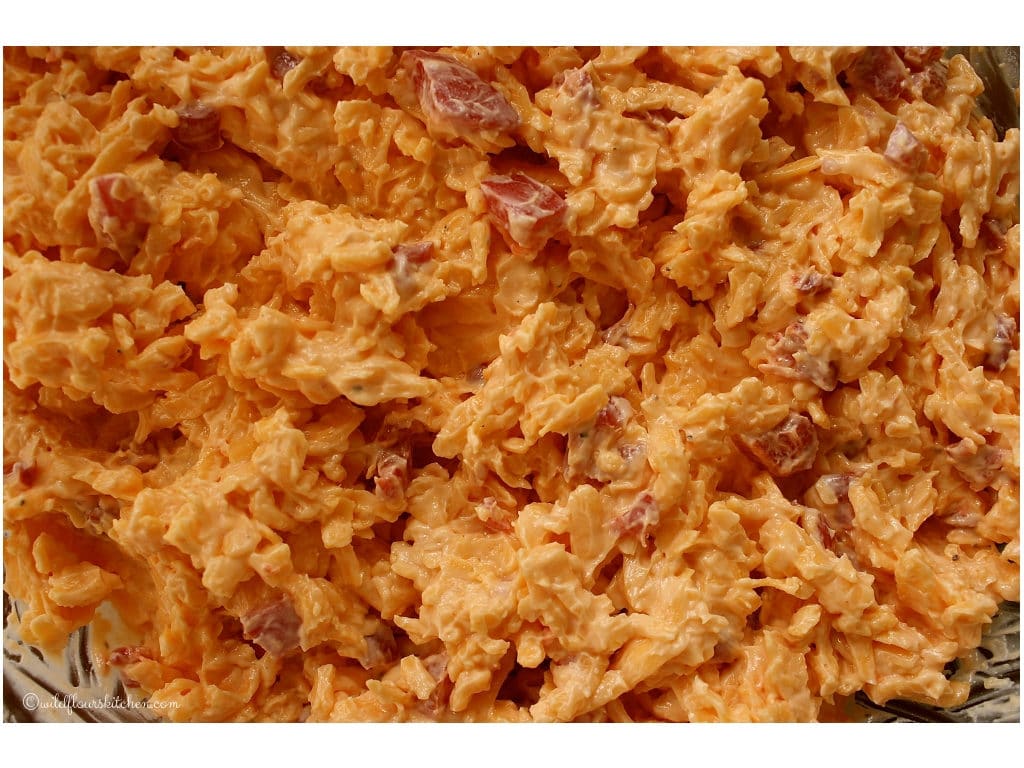 The third basic ingredient, is regular heavy mayonnaise. If you’re living in the south, a jar of Duke’s will do it proudly.

If you’re not fortunate enough to have access to the King of Mayos, Hellmann’s also works perfectly. Just don’t use Miracle Whip for this. You might end up tarred and feathered, or run out of town on a rail! Fair warning given. 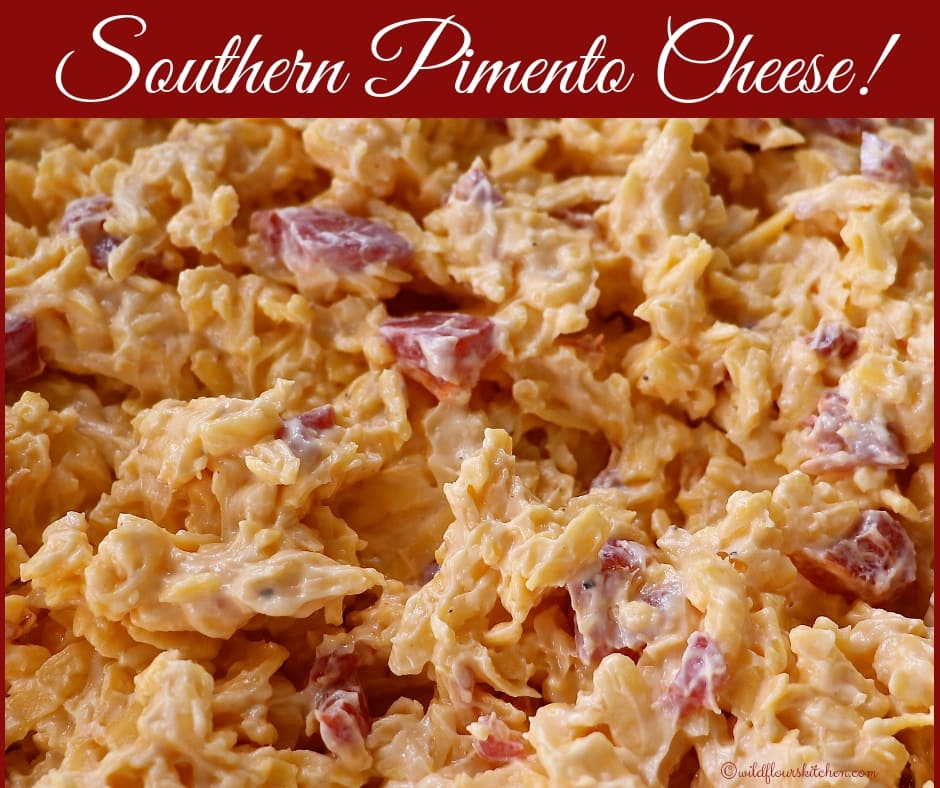 So besides being delicious just plain on crackers, bread as a sandwich, or as a dip for crudités, it’s also quite wonderful when it’s heated and melted, too!!!

And I have two fun examples coming for you to try!

Both (ordinarily plain) lunches, were turned into something fantastic just by adding this simple cheese! You’re going to want to make them BOTH!! 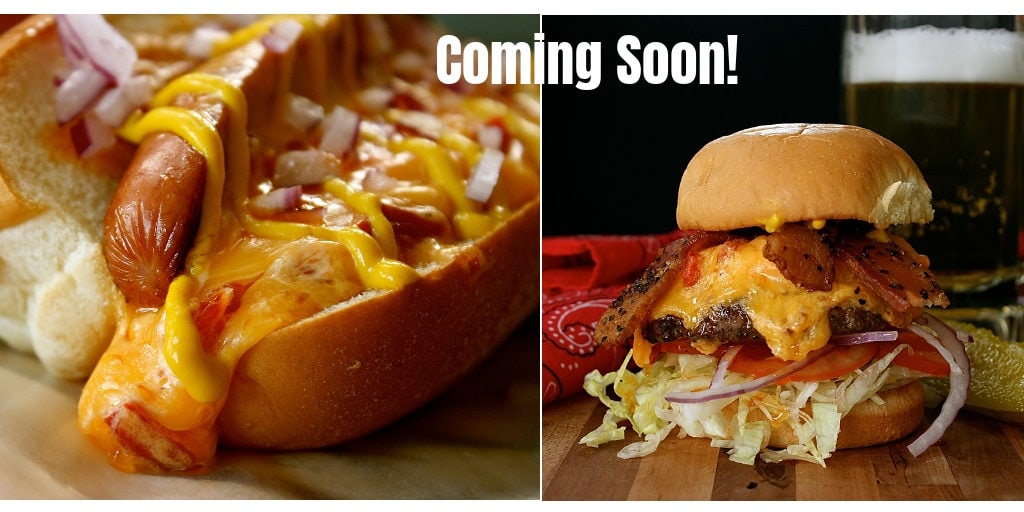 I find it kind of hilarious how a lot of upscale restaurants are offering it, especially with it’s new popularity taking countries by storm, yet fast food joints and diners still have yet to catch up!

You’d think that it would be the other way around! Funny, actually!

So if you want to kick up your tired, same-old same-old, routine lunches with something classic that will take them over the top, get out your old box grater and make a big ol’ bowl of THIS!!

Just make sure that you have plenty of friends around to help you eat it…because eating the whole bowl by yourself is never something that you can explain well later. Just saying.

So, with New Year’s Eve just hours away, why not ring in the new year with this classic! It’s cheesy, creamy, sparkling with ruby-red mild peppers, and the perfect base for any appetizer that you can dream up!

My Just Plain Good Southern Pimento Cheese is the perfect start to a new, hopefully less complicated and less stressful year, for us all! Crossing my fingers that this will finally be the year that things start getting better! It’s definitely off to a great start with THIS classic cheese spread! Hoping that the new year will bring you good luck, too! Enjoy!!

Serve on crackers, bread for sandwiches, or use as a dip for crudite´!

It should have cream cheese in it!