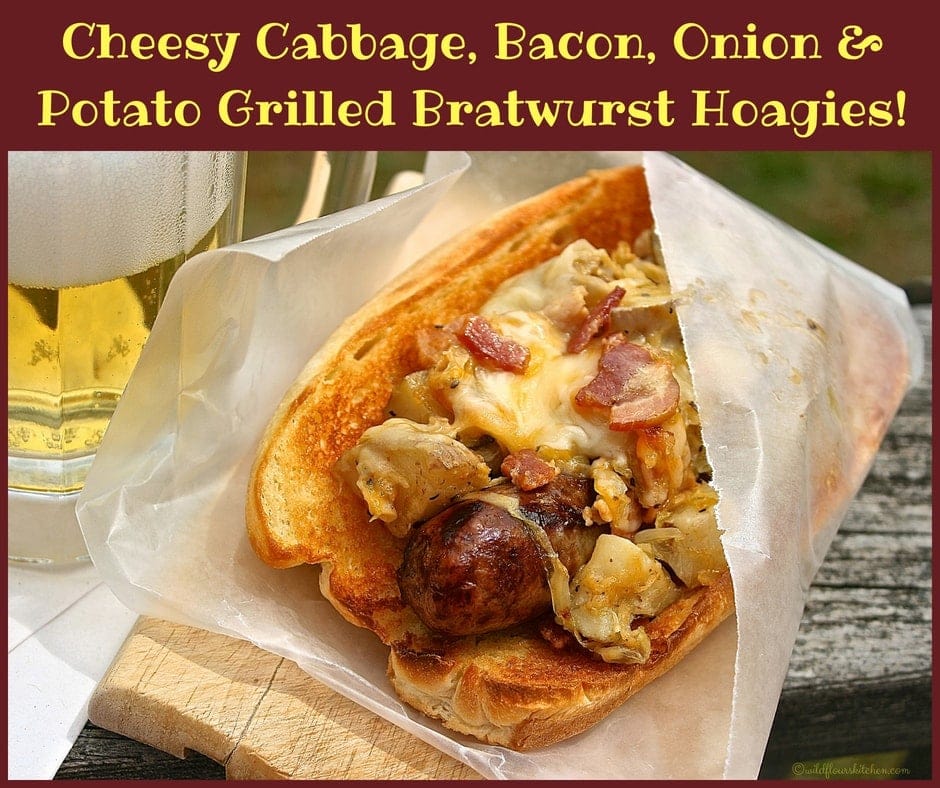 A simple, tasty treat of Cheesy Cabbage, Bacon, Onion, & Potato Grilled Bratwurst Hoagies kicked off summer with a BANG! It’s quick and easy to make, and was just what we needed on the first, scorchingly hot, 97º summer day!

It was hot. It was sunny. The birds were singing, and I was excited to hit the deck and dust off the grill! I had some cabbage that I had to use or lose, a new bag of potatoes, plus brats, bacon and rolls in the freezer, so this idea was a no-brainer that pulled together in less than an hour!

I sautéed the veggies and bacon indoors on the stovetop, but you can do the whole thing on the grill and have it all done in about 30 minutes if you want to! Just use a cast iron skillet for the bacon and veggies!

If you’re camping, you can do it in a cast iron pan over your campfire, or do the foil-packet method! Even easier! 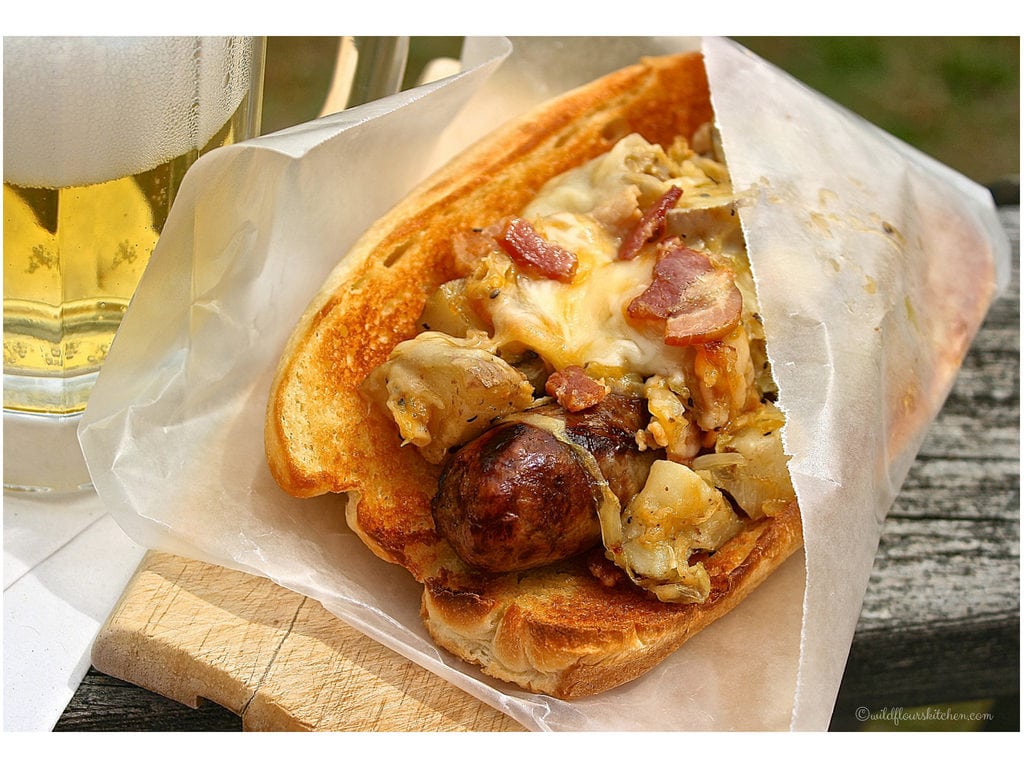 But when the heat had spiked from being mostly in the 40’s and 50’s clear up to almost a 100º, I decided not to try and overdo it, stress out, and divided the work up into outdoors and in. Once we acclimate to the heat, I’ll be in full-blown, load up the grill mode again!

So no matter how you do it, you simply cook the snipped bacon first until crispy, remove it with a slotted spoon to paper towels to drain, and keep the bacon fat in the pan. 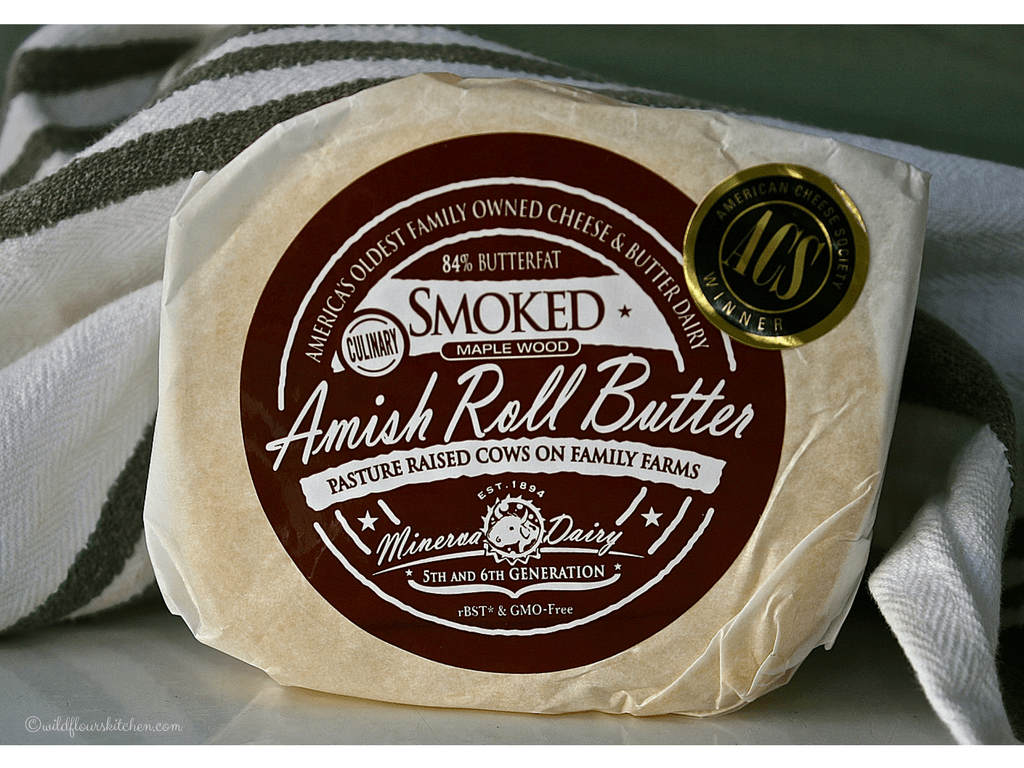 Add some of that awesome Minerva Dairy Maple Wood Smoked Butter to the pan, along with the veggies and seasonings, and sauté until the potatoes are tender. 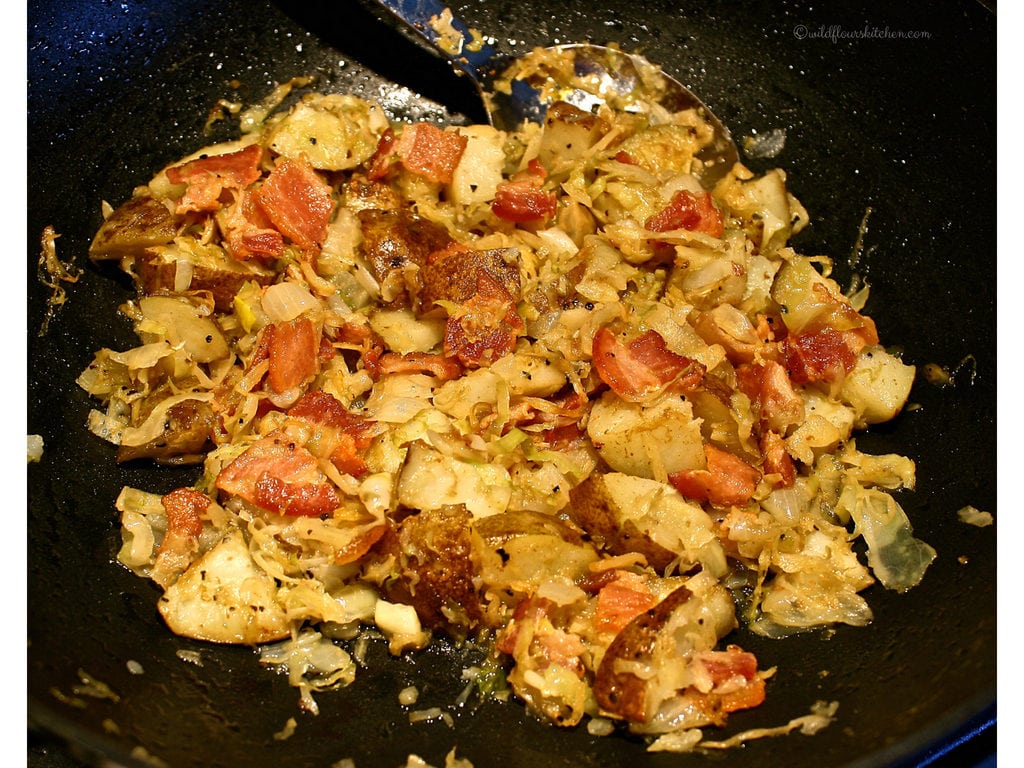 Once they’re done, add the crispy bacon back in and grate whatever cheeses you’d like right over the top, cover with a lid, and remove it from the heat. The hot veggies and heat from the covered pan will melt the cheese. 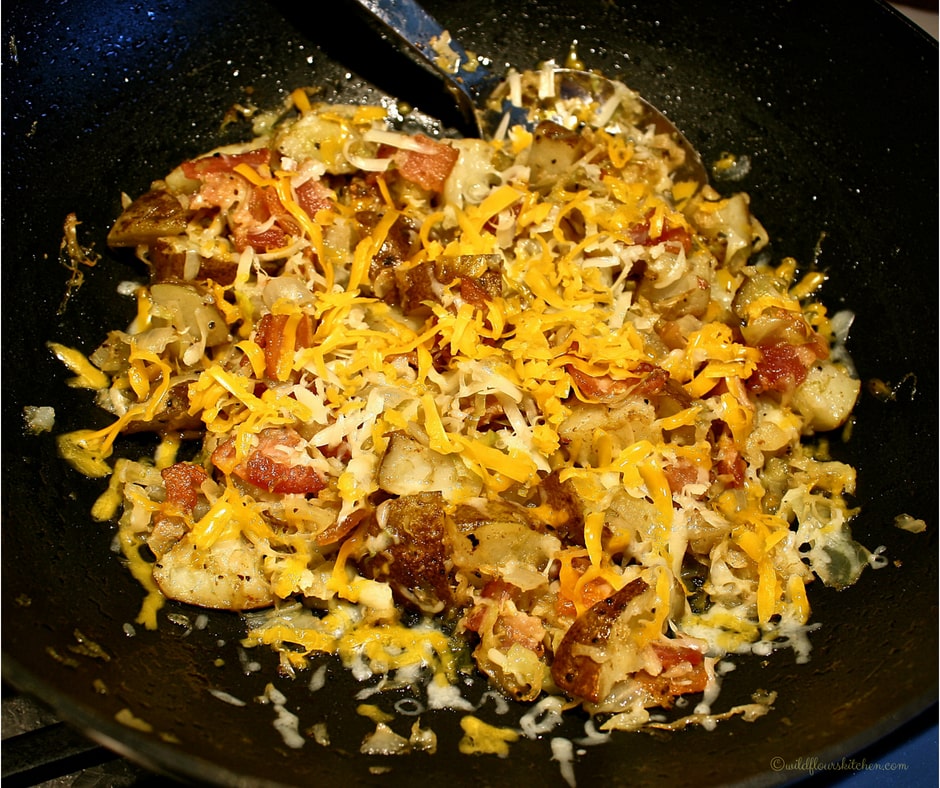 While the cheese is melting over the veggies, spread more of that heavenly smoked butter onto the split open hoagie rolls, and run them under the broiler to toast. 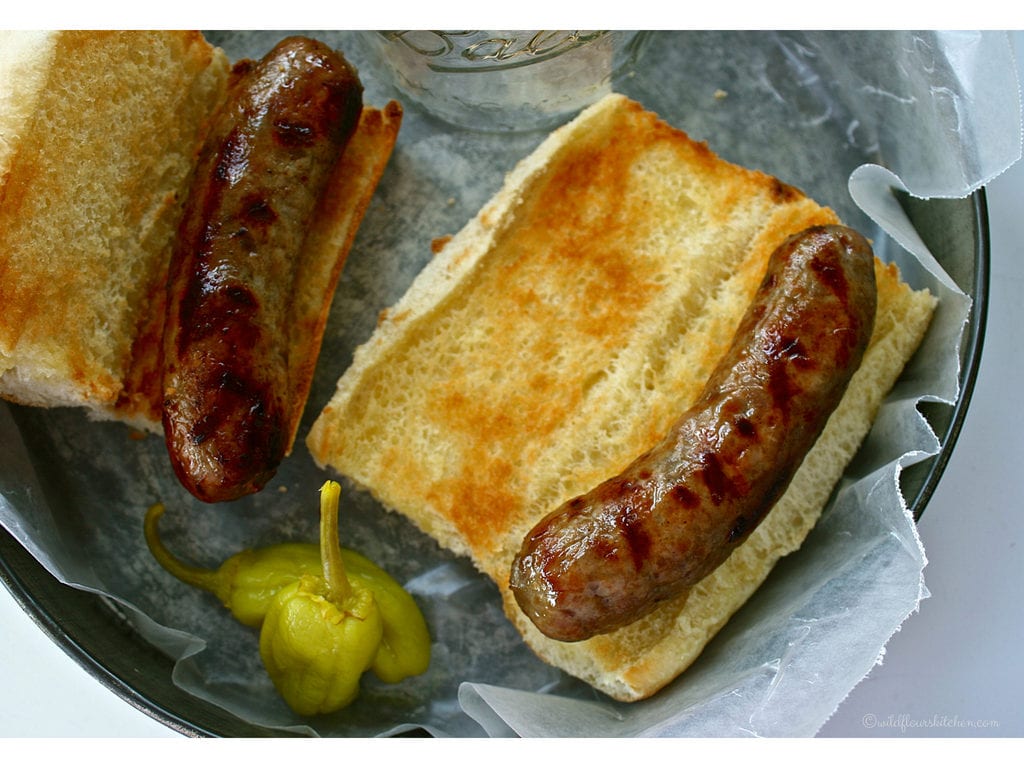 Then top them with warm, grilled brats! 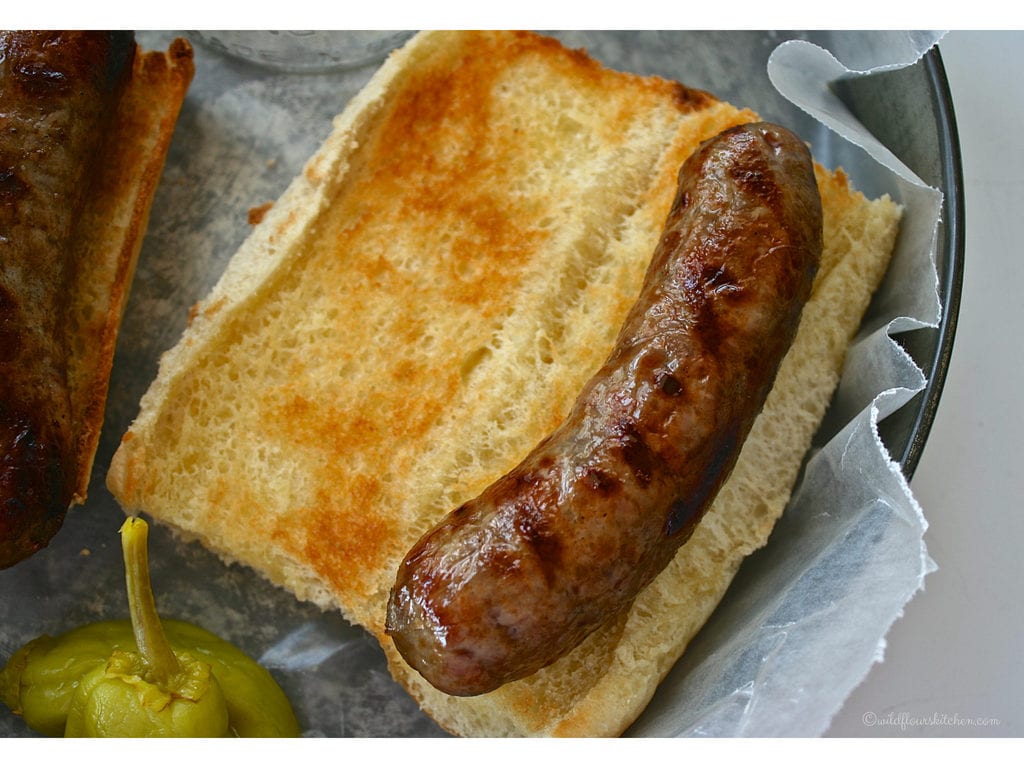 Next comes that AWESOME, buttery, cheesy, cabbage, potato, onion and bacon mixture! Be sure to pile it on!!! It’s sooooo good!!! 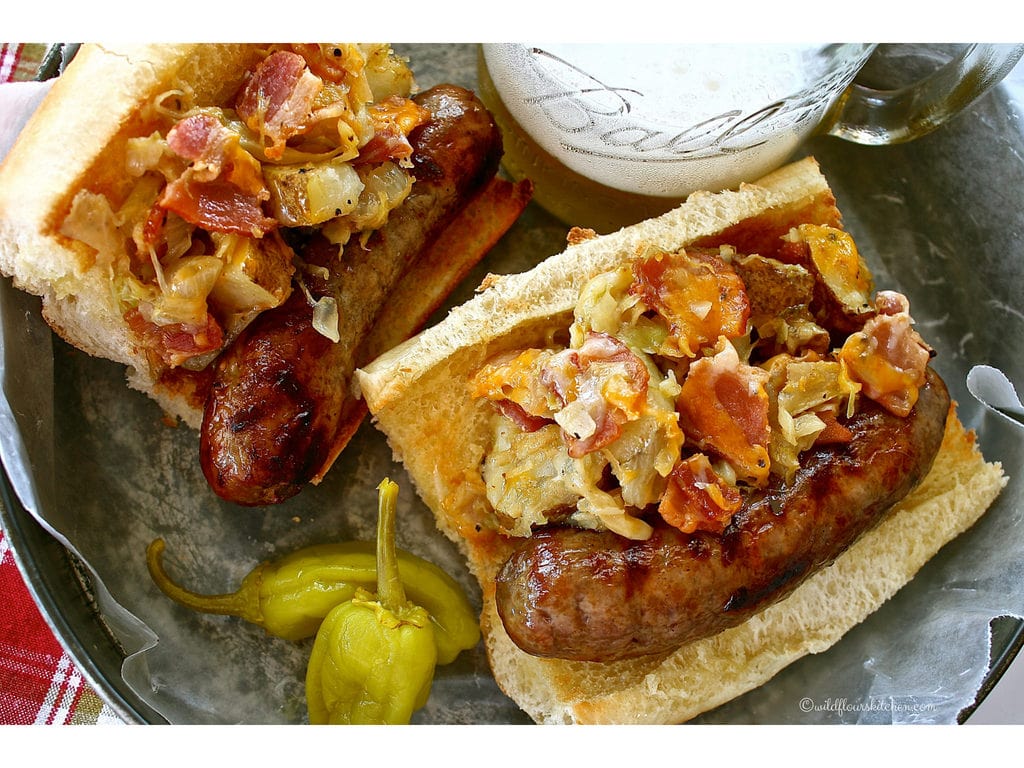 And because we’re total cheeseheads, I added even more cheese on top! 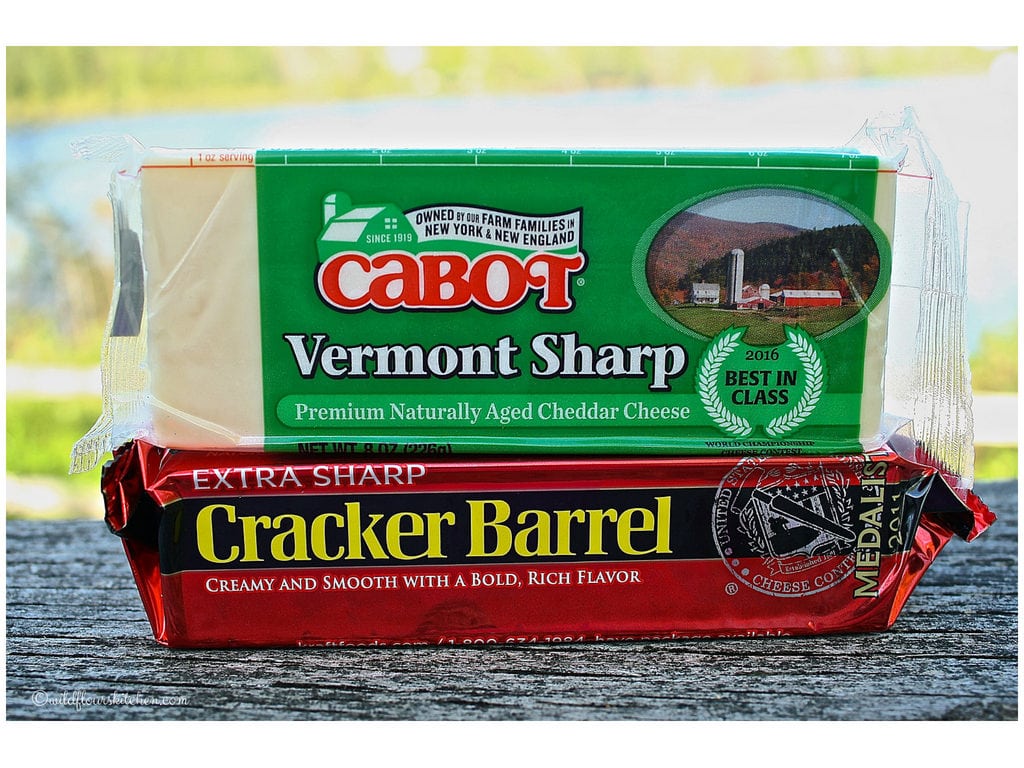 I used a combo of Sharp Vermont Cheddar by Cabot, and Extra Sharp Cheddar by Cracker Barrel, and they blended perfectly! 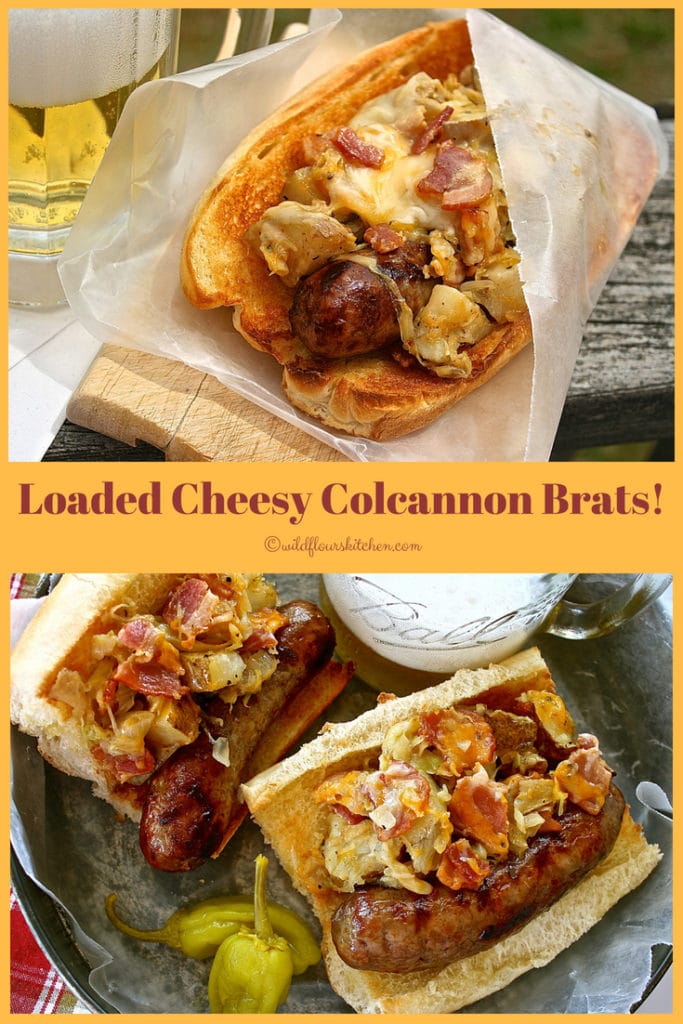 And these babies were the BOMB.

There’s elegance in simplicity, and everything went together so harmoniously, that I was glad that I forgot to drizzle a little mustard and hot sauce on mine!

Frankly, they were so good as is, that they really didn’t even need it! But feel free to add whatever you might like.

You’ll definitely want to plan on making these Cheesy Cabbage, Bacon, Onion & Potato Grilled Bratwurst Hoagies soon! These would be fantastic for a large party because you don’t have to fuss with too many expensive toppings, they’re super easy to make, economical, and taste FANTASTIC! Quick enough for a weeknight meal, and easy enough to do while camping! What’s not to love about all that, right? Enjoy!!