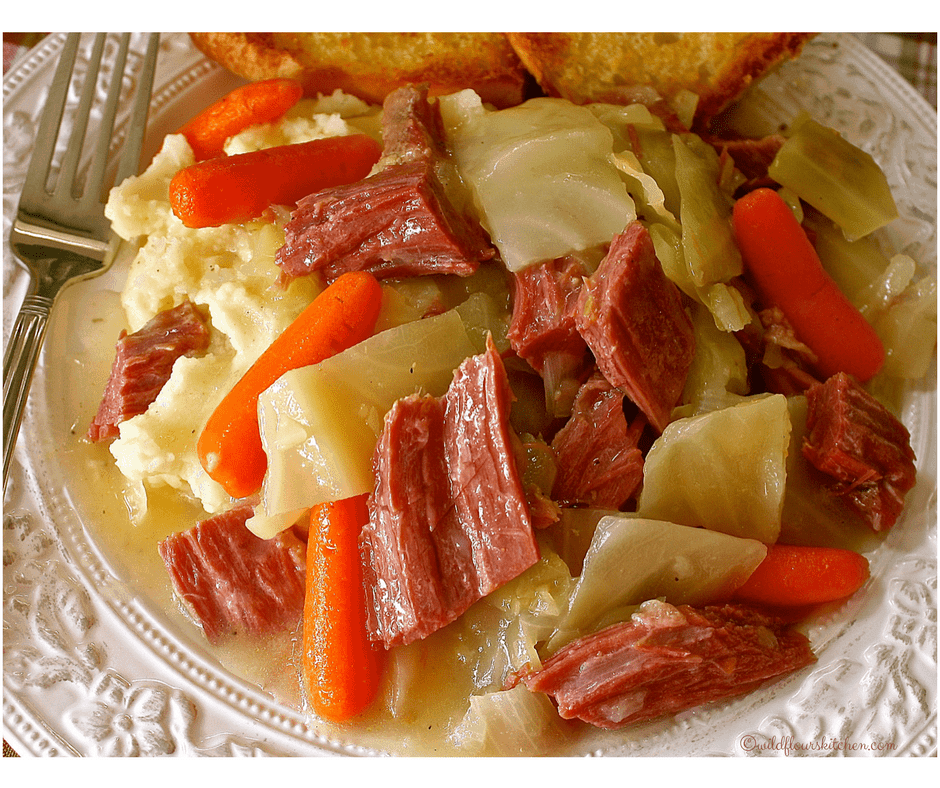 Who said you can’t have corned beef & cabbage any time you want? And my way, Kelly’s Corned Beef & Cabbage, just made a corned beef lover out of my hubby! He always swore he hated it, until I finally talked him into it.

He loved it so much, that he had some of the leftovers for breakfast!

I think it’s partially due to the way I enjoy making it. I don’t make it the traditional way of just slicing the corned beef and serving it with boiled cabbage and red potatoes.

That’s just too boring for me!

I like to make mine by adding my cooked corned beef to a pot of specially seasoned cabbage, sweet baby carrots, and onions in a rich gravy, and then ladling the whole mess over homemade mashed potatoes! 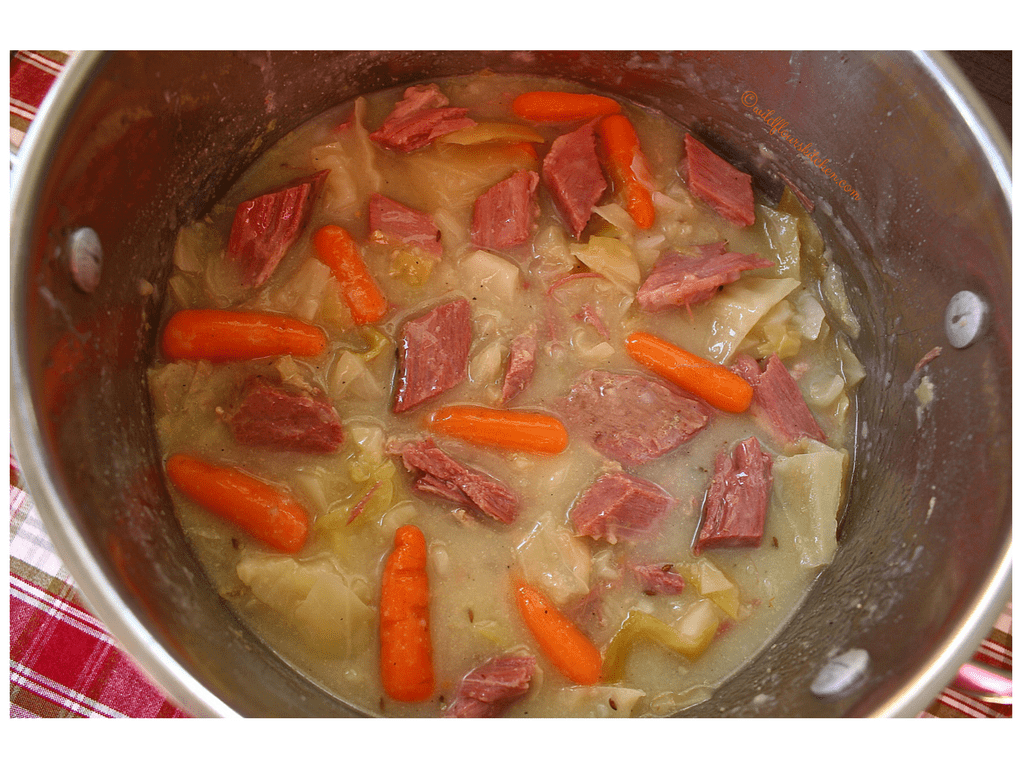 It’s just so much more flavorful this way! It also helps to make, and keep, the corned beef juicy and tender, rather than tough, stringy and dry like most that I’ve had!

I SO wish that you could smell this! My whole entire house always smells amazing when I make this, and never like stinky ol’ cabbage – – just plain wonderful!! 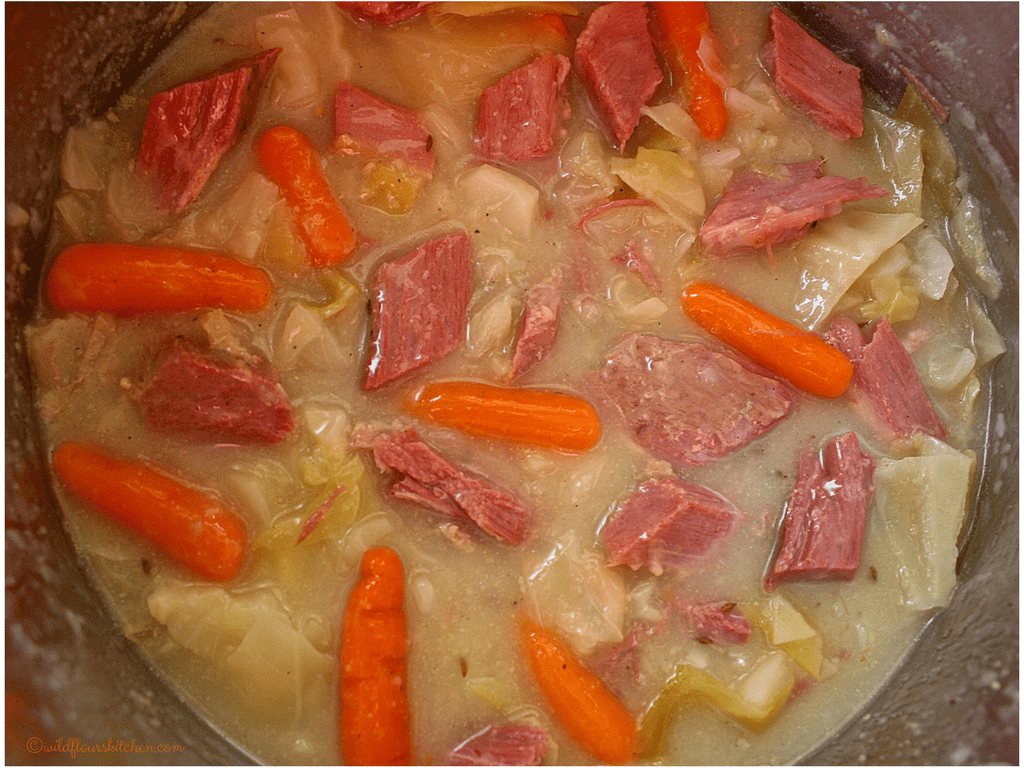 The only trick to this, is to not have too much liquid when you go to thicken the broth into a gravy, or you’ll be using a whole box of cornstarch!

I simply ladle most of it into a glass measuring pitcher to save it for another use (or to have in case I need to add some back in) before thickening, and it works beautifully.

Plus, you can always then cool and freeze that heavenly broth for a pot of soup or to cook noodles in later!

You can use it straight up, or freeze into small jars and use just some mixed with chicken or beef broth! 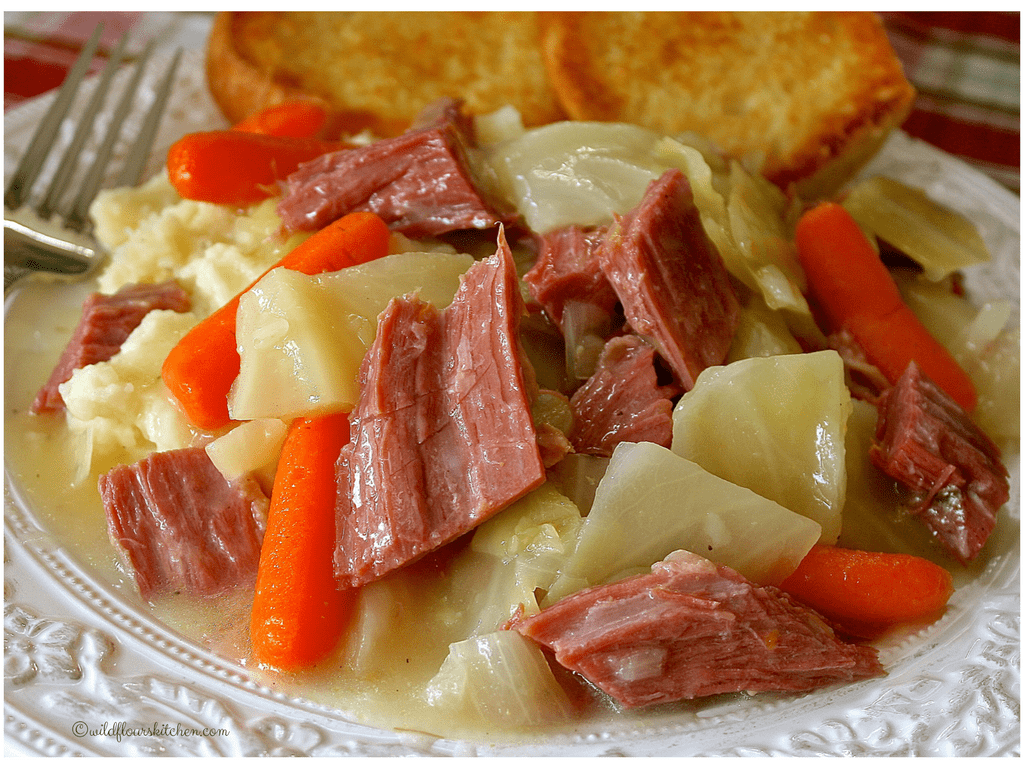 I don’t do anything fancy to this, as I most enjoy it kept simple and pure. But I do add a teaspoon of whole caraway seeds to the pot, and that really makes the flavor extra special!! 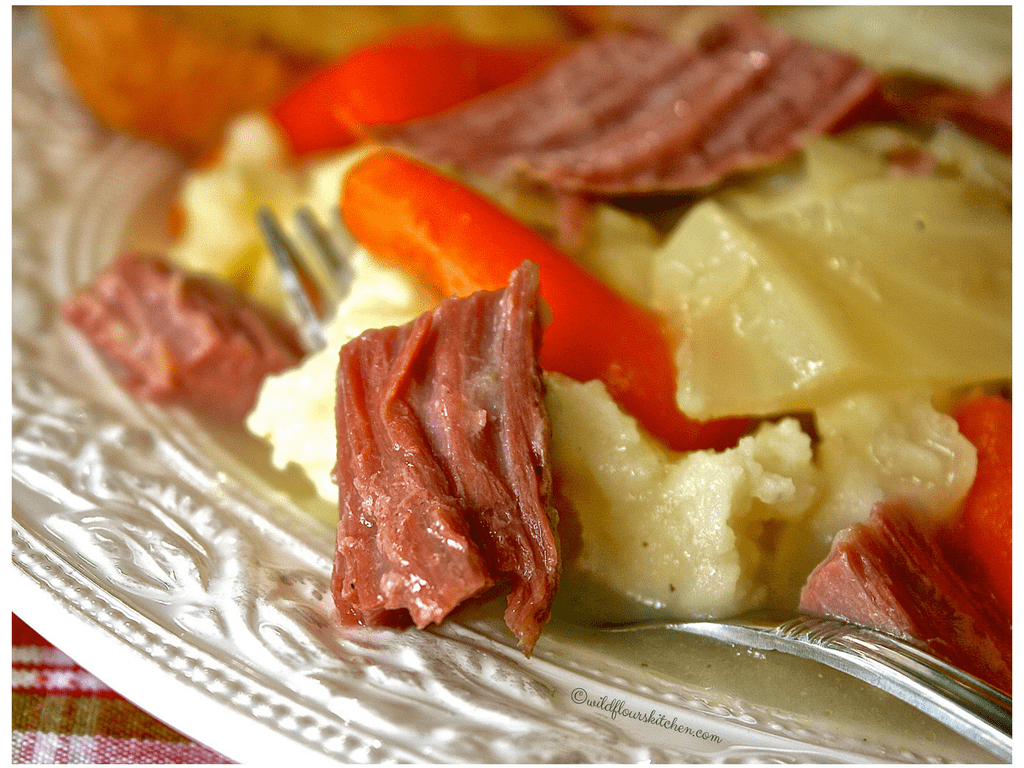 The cabbage never turns out bitter, either.

I add just a little dark brown sugar and some butter when cooking the vegetables, and along with the baby carrots, it adds just enough sugar that it’s not sweet, but takes away any bitterness.

And when this pot of deliciousness is ladled over my Best Creamy Homemade Mashed Potatoes…believe me. It’s better than a pot ‘o gold!

Everything blends together so beautifully, that you literally have to tell yourself to slow down and not INHALE the whole plate at warp speed!

Buttered rye bread or rolls, or toasted bread goes wonderfully on the side for sopping any extra gravy, too!!

So if you’re looking for a DELICIOUS Corned Beef & Cabbage recipe, that’s a little different, and a little better than the rest, the luck o’ the Irish is smilin’ down on you today, and that is GOOD luck, not bad!

So, just enjoy this hearty fall and winter meal ANY time of year! No need to wait until March to enjoy! (I hate “food rules”, they’re so silly!)

Sláinte! And have a wonderful day!

*After reheating the next day, if it's too thick, add a splash or two of milk and more salt & pepper. If too thin, bring just to a simmer and add another slurry of milk & cornstarch and preseason. But don't adjust either way until it's fully reheated! It will thin out after it's hot again.