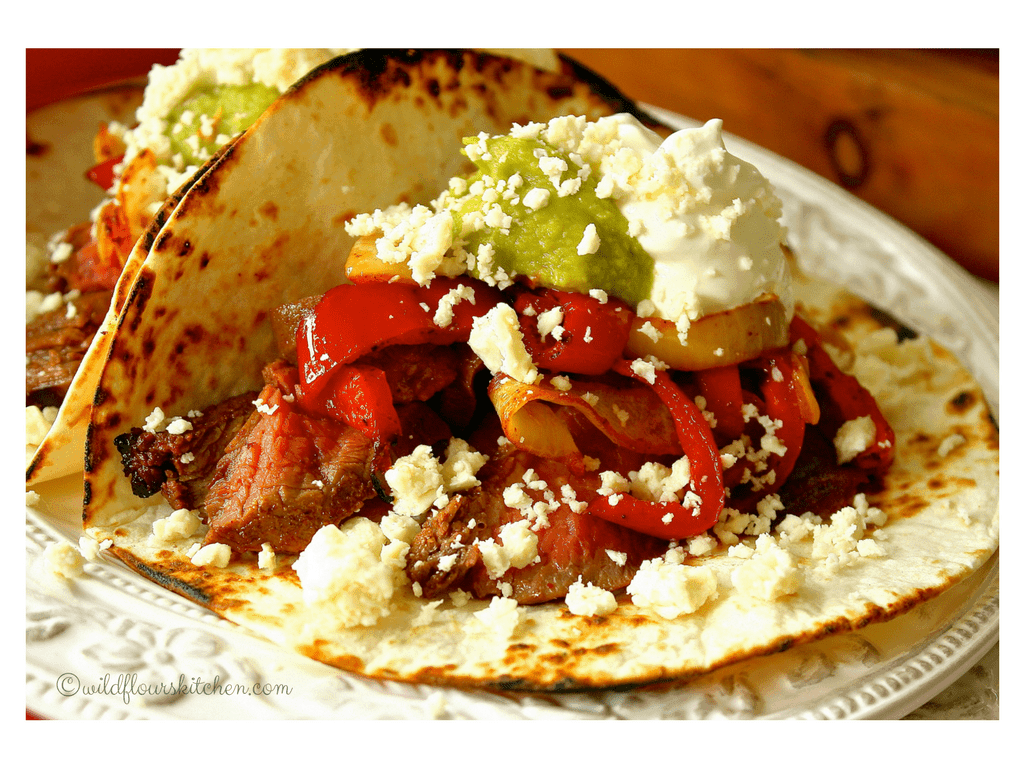 Well, that flank steak that had been in the freezer for almost too long just got put to GREAT use for these Key Lime Flank Steak Fajita Tacos! And if you have one too, that was most likely purchased on sale, (as this tough cut of meat suddenly got unrightfully and unjustly  pricey), and got waved to the side because you didn’t quite know how to cook it once you got it home…well here’s what to do with it!! And it’s PERFECT for any Father’s Day gathering, because it’s actually very tender if you slice it against the grain into very thin strips, which means it goes a long way and can feed a crowd no probs!

What Dad wouldn’t LOVE  a giant hunk of meat that’s already marinated that he, or whoever is the grill master of the crowd, can toss onto a VERY hot grill and sear each side with almost zero effort at all and no major time spent, right? And absolutely perfect for a large, or even small gathering! 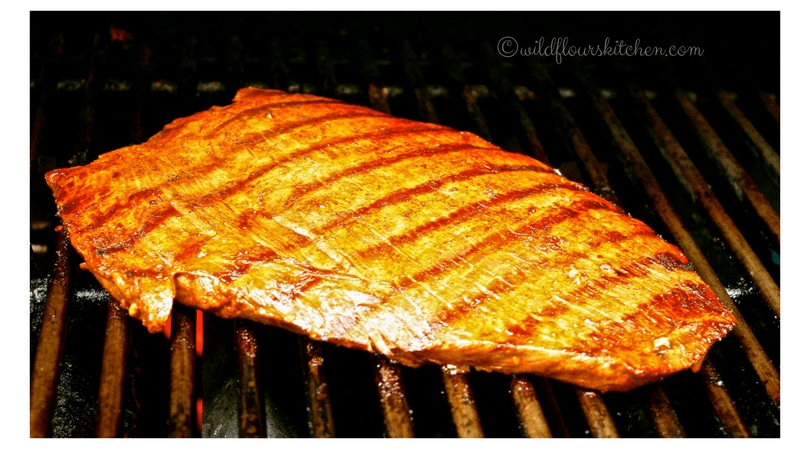 Flank steak is a tough cut. It is. But if you just marinate it, and toss it onto a screaming hot grill and sear it on both sides, it turns into a VERY tasty cut of beef!!  The only thing to remember, besides not overcooking it, is to slice it very thinly against the grain after letting it rest when removed from the grill. It’s as simple as simple gets, and a GREAT cut of meat if you don’t overdo it. Just keep it simple as I have done here, and you’re good to go! 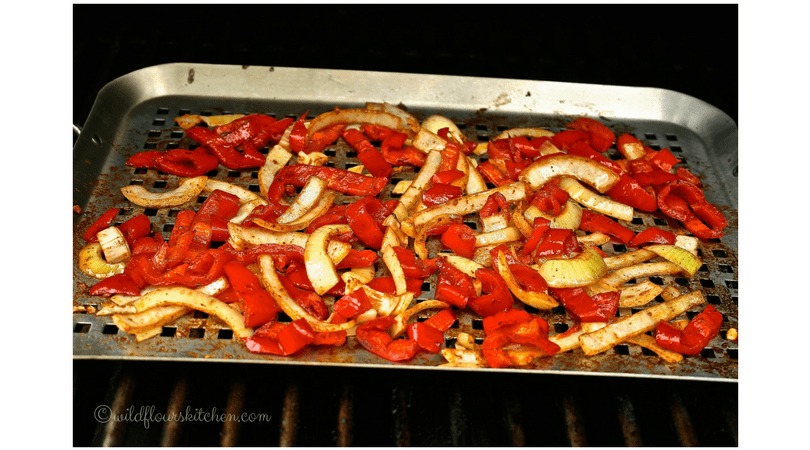 While grilling the steak, or afterwards while it rests, grill up some veggies to go on those fajitas or tacos! I kept it simple so as to not overpower the steak, and just did some of last year’s cubanelle peppers along with some onions. 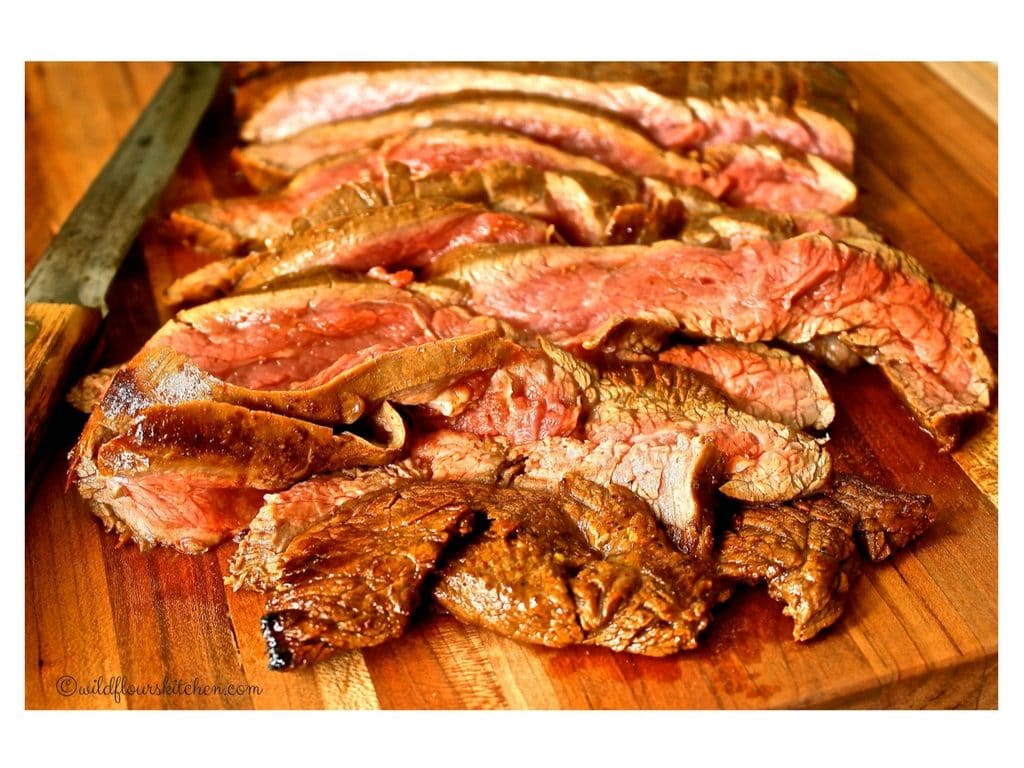 We like our steaks cooked, especially for this cut, seared hard on the outside – – and rare on the inside. You can grill yours a bit longer if preferred, but be careful not to overcook it.

If you do, you can always use it to put new soles your shoes. Fair warning. 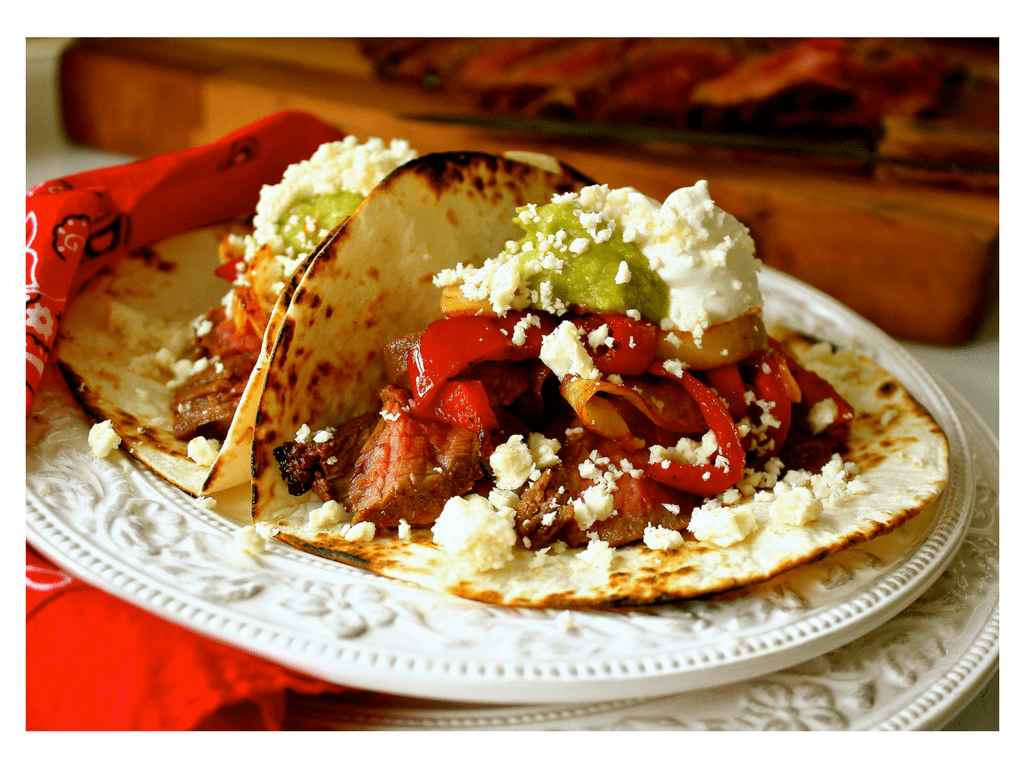 I didn’t know whether to call these, “fajitas” or “tacos”, so I relied on google for the answer.

This is what it says:
“A taco is fillings wrapped in a tortilla. The tortilla can be crisp (a taco shell), cooked soft or uncooked, flour or corn, and fully rolled or just folded. Fillings include meats, cheese, vegetables, and salsa. A fajita is a specific type of taco, specifically one with a filling of marinated and grilled skirt steak.”

Ok, so, I didn’t use skirt steak. But they’re a lot like fajitas, except that there’s veggies and cheese and stuff.

So, I’m calling them “fajita tacos”.

That should about cover it.

And cover it we did!!!! I used the very small “fajita” flour tortillas (*smaller than taco-sized and much, much smaller than burrito-sized), so that we could enjoy a few of them, rather than one or two large ones. Smaller ones are so much easier to handle and much more fun! And they’re also perfect for this recipe as you want to slice the steak very thinly, and not add too much stuff that would mask their flavor.

This would be a super fun grill recipe for Father’s Day, summer holidays, block party or get-together, or any summer weekend just for the fam! And one steak goes a LONG way! Which also makes it ideal for serving to company. It also doesn’t require all the extra toppings that typical tacos do. Simple is better for these to let the steak shine and be the star. Marinate the steak overnight, prepare any sides you’d like in advance also, and basically just sear the steak and veggies and you’re good to go! LOW to NO stress for parties!! Set out some cheeses, sour cream, and guacamole. Toss the tortillas onto the grill. And let everybody go to town. DONE.

Just make ahead a few sides to reheat or bake in the oven, and get the party going! Keep it simple, so that you spend your time having fun with your guests and not stress out in the kitchen while everyone else is having fun and enjoying the day. Making sides ahead also has the whole mess done and cleaned up, too. Enjoy the day like everybody else. And…just breathe. Every little thing will be ok. 😉