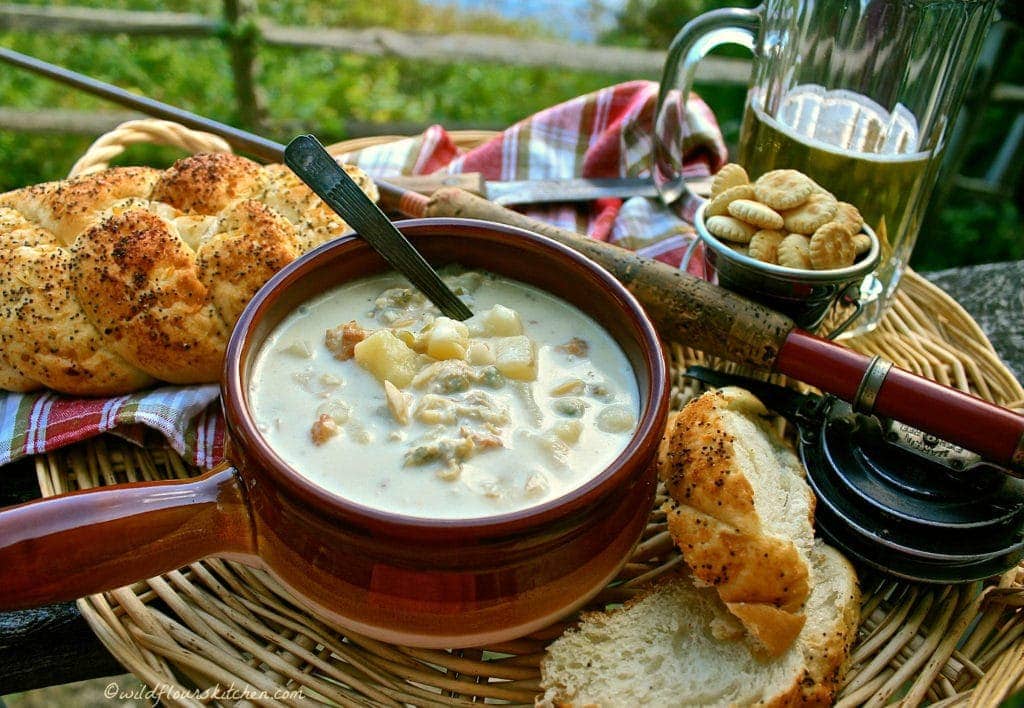 Everyone likes things the way they like them. And when it comes to New England Clam Chowder, my hubby and I like it done a bit differently. I prefer my chowder more traditional, as I have made it in the past (click here for that recipe), thinner, and ladled over crushed saltines to “thicken”.

The hubs, on the other hand, prefers his chowders “pre-thickened” if you will, because he despises crackers in his soups, stews, chilies and chowders! So, though he still really loves my more traditional chowder, I decided to go ahead and add my other version for him and  everyone else who may also enjoy it nice and thick, thicker, and thickest!

You see, I’ve decided to let YOU decide just how thick you’d like it. Because, it seems that exact preference also varies greatly from person to person. So, it’s thickened twice!

The first basic thickening happens with a classic veggie and flour roux. Always be sure to cook that flour! Or any sauce, gravy or soup you’re making will taste like paste if you don’t. If you were one of those kids that ate Kindergarden paste and liked it, well, I can’t help you there. You’re on your own, kid. 😉

The second thickening happens very last. It’s the easiest and quickest way to adjust something to exactly the way you prefer it. You simply stir equal parts cornstarch with COLD water until mixed well, scraping bottom to get it all mixed, (which is called a cornstarch “slurry”), and stir into a low simmering or boiling liquid and it will thicken it instantaneously like magic! Be sure to stir while adding, and then simmer at least 30 seconds while stirring to cook it a little. 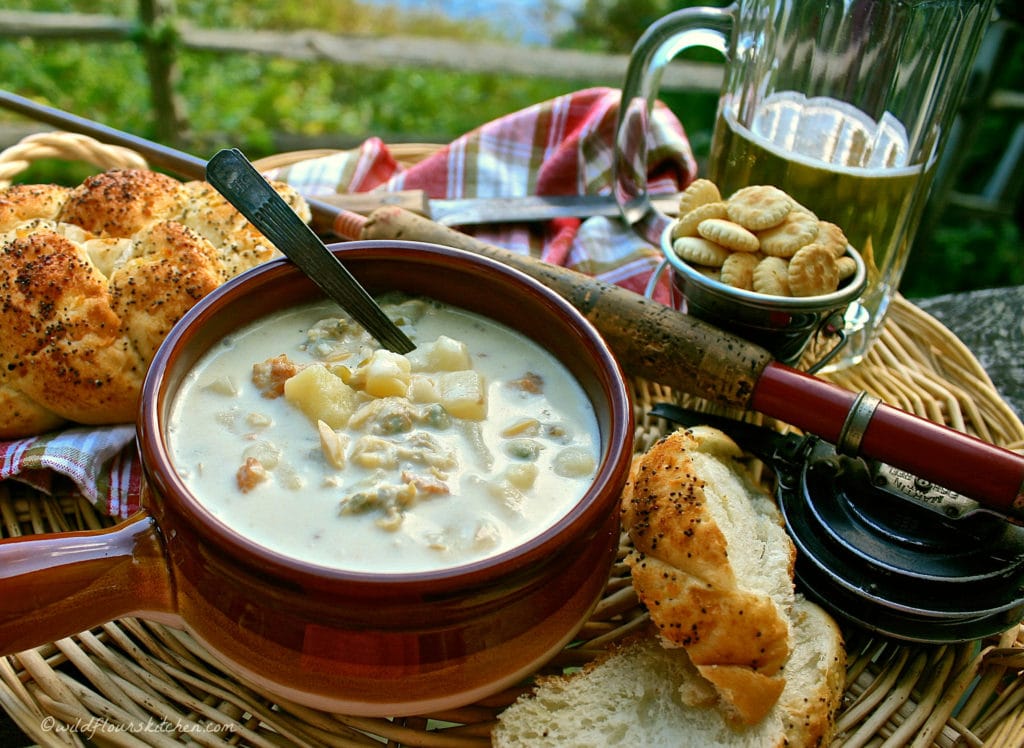 So, in this recipe, I have you adding just one slurry at a time, until you have reached the perfect thickness that you like! My hubby said, “When!”, after just one addition, but you may want as much as three! Always make things how you enjoy them! 🙂 If spoon-standing, super-thick makes you happy, then there’s no “right or wrong” about it. No matter what the purists or connoisseurs say. 😉 Everyone should be able to enjoy things the way they personally like. 🙂

And that goes for the clams, too. I simply used canned this time, and they worked just fine. Just remember to use small ones, as they’re the most tender. 2 tall cans were plenty for us, but if you want to add three, go for it! Just remember to only add one can with the juice. Any additional cans will need to be drained so it doesn’t thin your chowder.

So, if you’ve been hunting for a way to suit yourself and make porridge “just right”, I hope that you’ve just found it! The hubs was in clam chowder heaven, and we both enjoyed sopping up the rich, creamy broth with some very delicious, semi-homemade bread that I’ll be sharing soon!

This non-traditional, super creamy New England Clam Chowder, chock full of tender clams and potatoes that melt in your mouth, is sure to be a hit not only for the upcoming winter months, but a chowder to cherish year round!

Enjoy this timeless classic, and make a pot today! 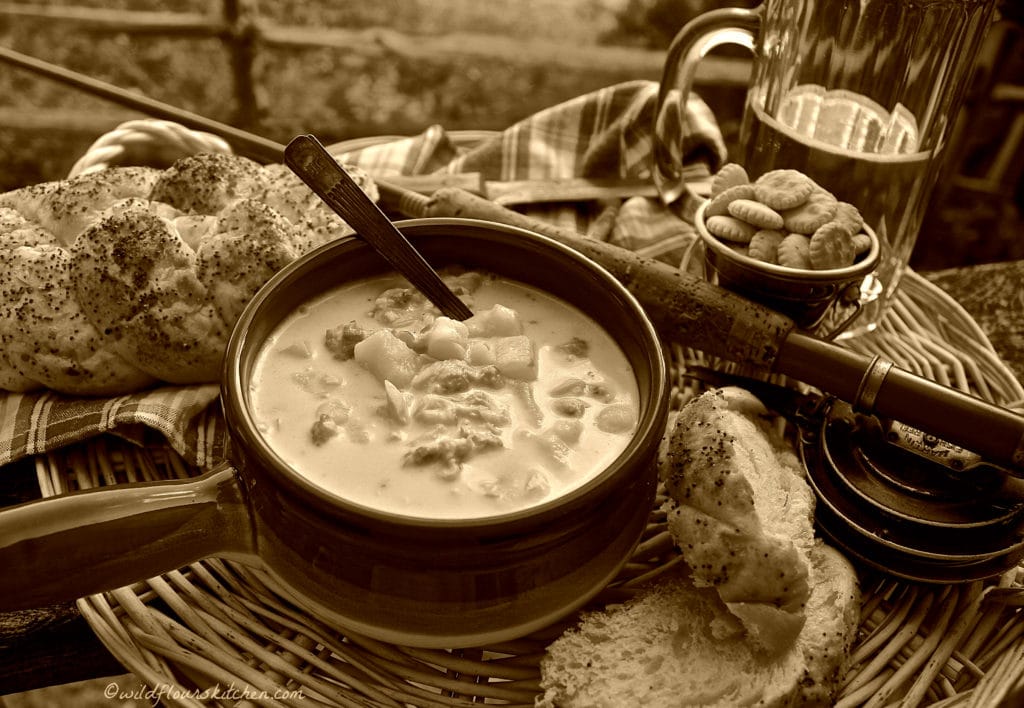 In large stock pot, add 2 Tbl. butter, salt pork and water and sauté over medium-high until fat has rendered, water has evaporated, and pork is getting crispy. (Lower heat to medium, then medium-low as water evaporates). Remove salt pork with slotted spoon and set aside.

Add chicken broth and scrape bottom of pot again. Stir until all is blended. Add milk, potatoes, bay leaf, chicken base, thyme, white pepper, garlic powder, Old Bay Seasoning, onion powder, and 1/3 cup of clam juice or water. (*It will seem like too many potatoes, but there is more liquid to come later).

Cover pot with tight-fitting lid, and bring just to a boil over medium heat. Turn down to LOW, and simmer until potatoes are fork tender. Stir occasionally to reduce foam and scrape bottom and sides of pot. Keep an eye on it. (I stir about every 7 minutes). Be sure to stir briskly so that edges of potatoes break down and help to thicken the chowder naturally. When potatoes are almost tender, after 15 - 20 minutes, remove lid and cook another 10 minutes until potatoes are fully done and crisp edges of potato are now rounded, stirring often.

Add one can of clams with the juice, and the second can drained. Stir well.

Stir in heavy cream and white pepper. Heat to a low simmer, and stir in cornstarch slurry, 1 Tbl. mixed with 1 Tbl. COLD water at a time, until you reach the thickness that you prefer.

Serve garnished with fresh chopped parsley and crusty bread for sopping, or oyster crackers if desired.

Hot sauce can also be served at the table for those who would like some.

*Leftover chowder will be super thick when chilled. DO NOT add any liquid. Chowder will thin out again when reheated.

*The easiest way to cook fresh hard-shell littleneck clams for chowder: (steam method):
Discard any clams that remain open when tapped with fingers. Scrub clams with stiff brush under cold running water. Soak clams in mixture of ⅓ cup salt to 1 gallon water for 20 minutes. Drain water; repeat 2 more times. Place 1 cup water in large stockpot. Bring to a boil over high heat. Add clams. Cover stockpot; reduce heat to medium. Steam 5 to 7 minutes or until clams open. Remove from stockpot with tongs. Discard any clams that remain unopened. Cut steamed clams out of shells with utility knife. Place into a small bowl, cover, and chill until needed. Add to pot at the end, the same as for canned, along with a small bottle (8 oz.) of clam juice if desired.

My Aunt always put chopped hard boiled eggs in hers. Very delicious! The best I’d ever had.

Tried there recipes using chicken stock. I like mine better using clam juice. And you can also use clam juice instead of the water when thickening. Just my choice.

@Lois, I agree. Clam juice is the way to go. We're not making Chicken soup here. The more of the signature ingredient that can be used, the more flavor. Good to go.

New England clam chowder is one of my ultimate favorite soups, and just like you sweet pea, I use thyme in mine. Killer pictures sweetheart, I wish we lived closer!! ♥

I so wish you lived closer, too!! We sure would have some laughs and a wonderful time!! :D