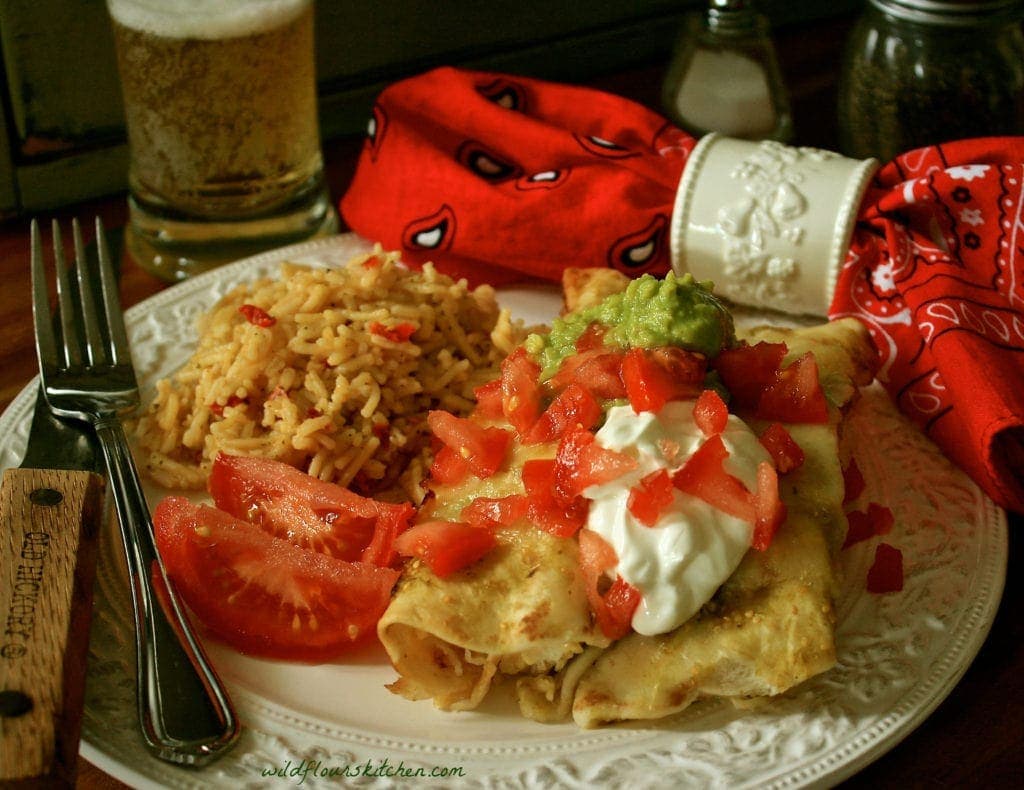 After making these classic, Mexican enchiladas the same way my mom made them since I was a little girl, I decided to change things up just a little this time! And they were delicious!! These “Enchiladas Suizas Verde (con Pollo)”, or in English, “Swiss Chicken Enchiladas with Verde Salsa”, are uniquely different from what you’re probably used to.

These are extremely mild, and are intended to be that way. It’s a myth, and almost offensive really, to think that all Mexican food is spicy and hot. Central and South Americans enjoy all types of food just like everyone else, and actually include quite a large amount of fresh fruits and vegetables, and fresh-caught fish and seafood in their diets.

But today, we’re using “pollo”, which is the spanish word for “chicken”, and happens to be my hubby’s favorite carnivorous treat! 🙂 This also happens to be one of his favorite Mexican dishes, so let’s get started!

You can pretty much cook the chicken any way you prefer. Stew, pressure cook, bake, or grill, but this time, I decided to just get a crock pot going and slow cook it until it was fall-apart tender, especially since I’m using all white meat (boneless, skinless chicken breasts).

Once the chicken is fully cooked and pulled into chunks, you simply coat it well with sour cream and add in some shredded swiss cheese, …..and….. 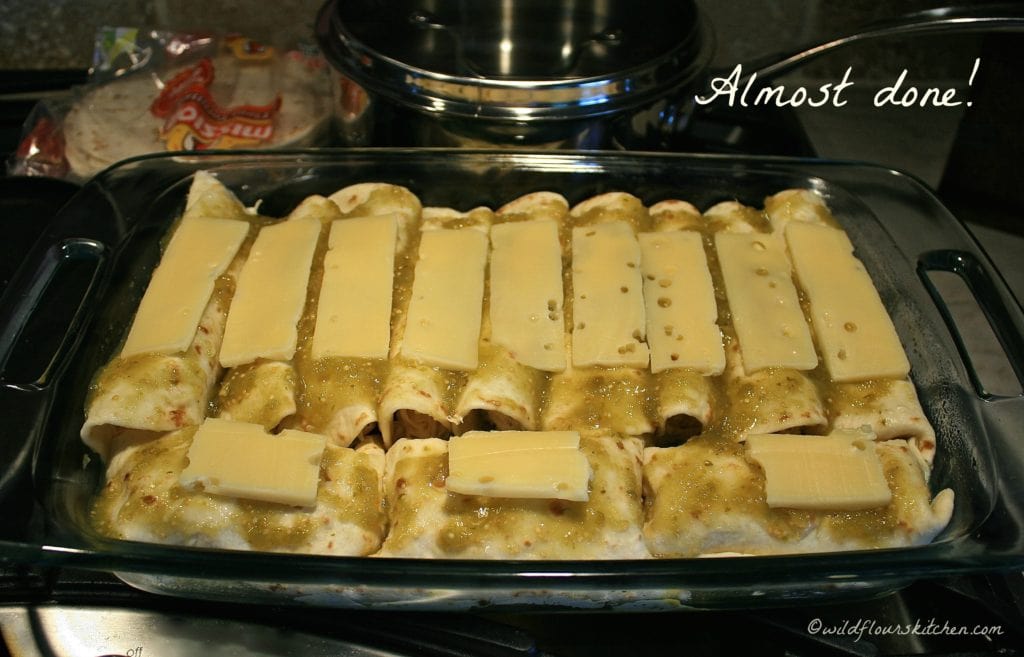 NO hot sauce. NO green chilies. NO chili powder or cumin. NO salt or pepper, either. 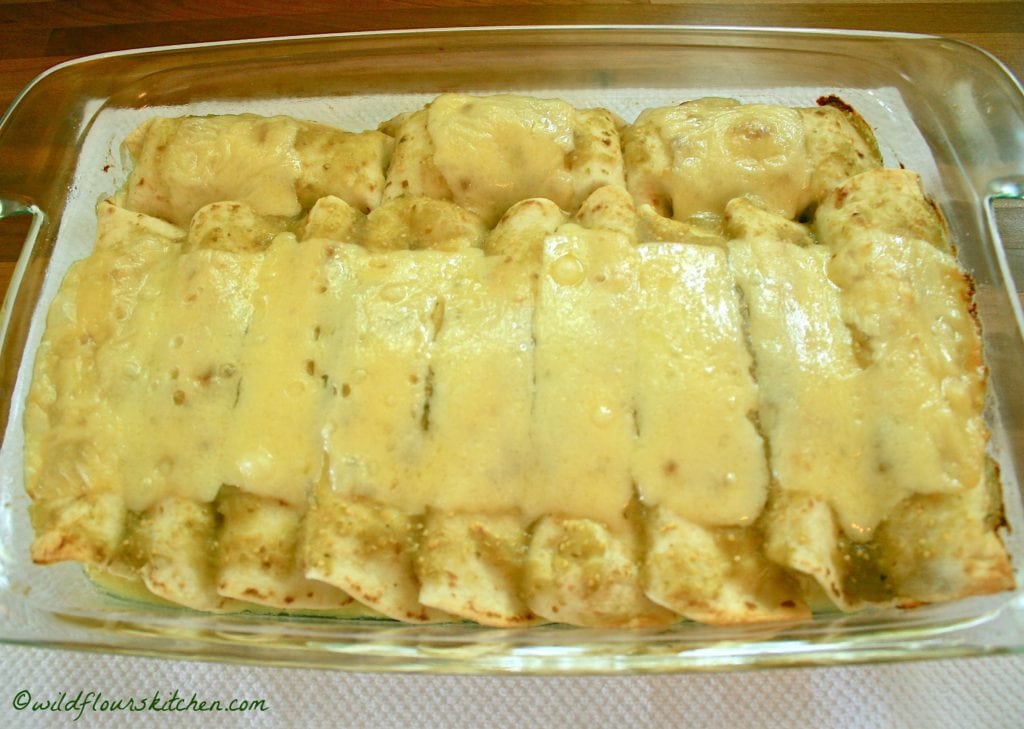 When everything is stuffed into lightly soft-fried tortillas coated with salsa verde, and baked in the oven….the magic happens!!! 😀 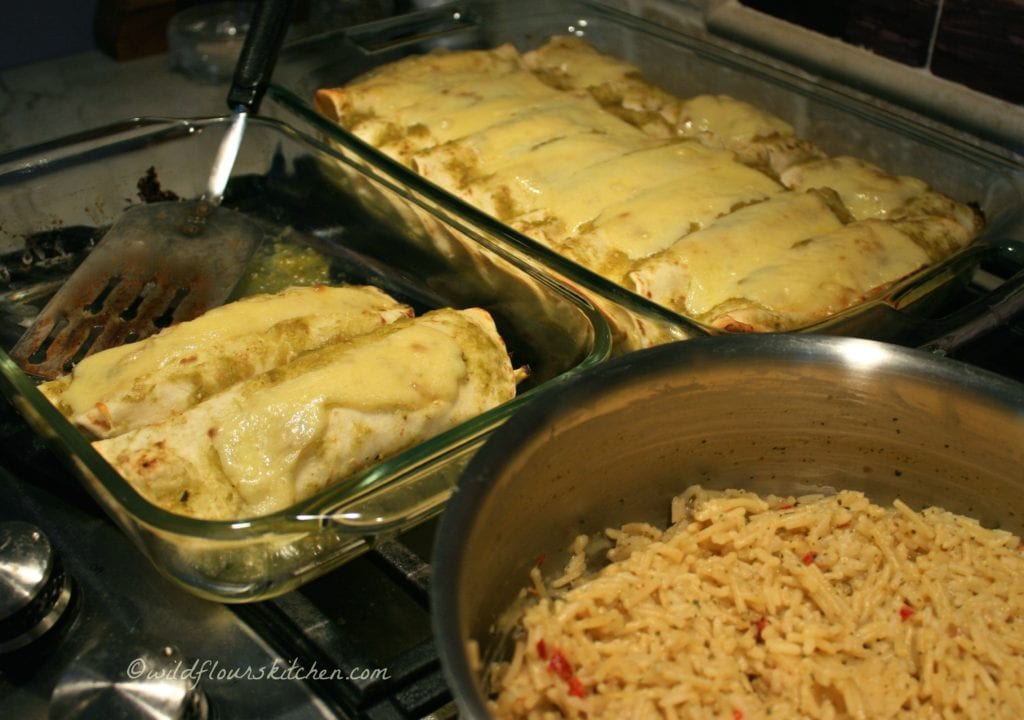 The chicken, sour cream, and swiss cheese all melt and blend together into a melty, creamy, richness like no other enchilada! 😉 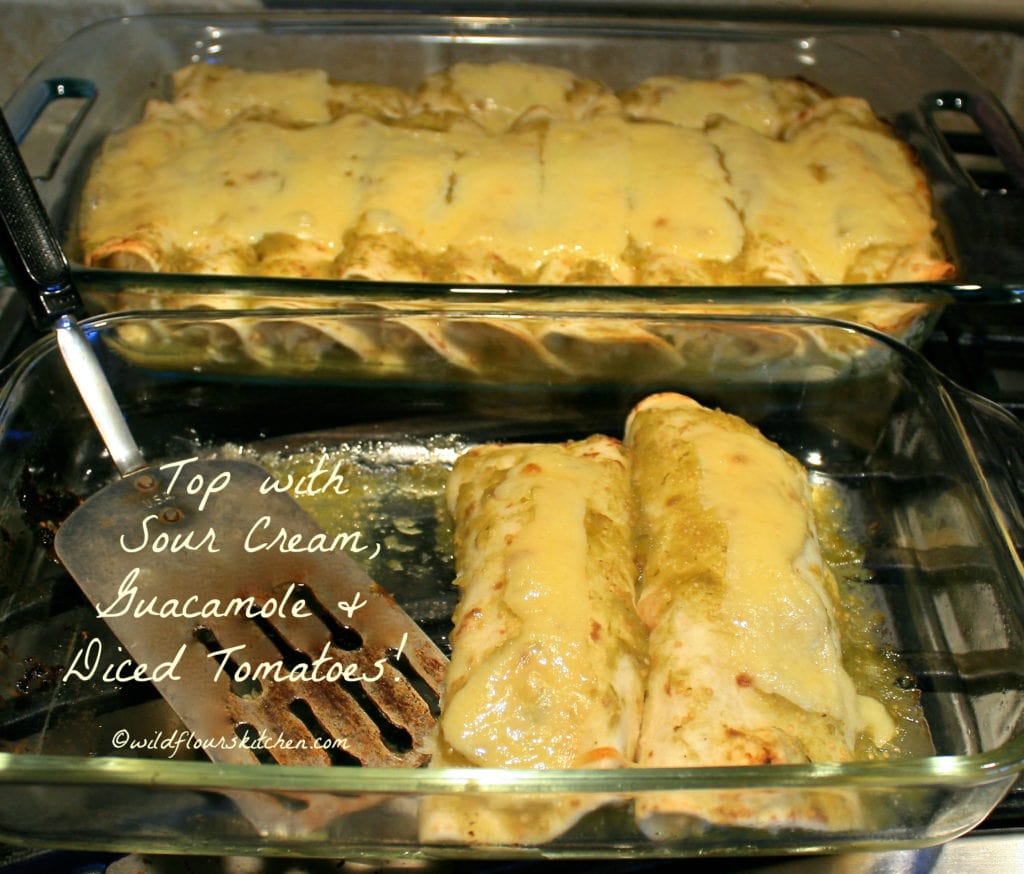 If you add something….you’ll ruin it. You really will. I have had people complain to me in the past that they made them….then go on to give me a LIST of items that they thought would “make them taste better”, and then went on to say that they ended up “terrible”. Well, gee, that’s what happens when you add in things that don’t belong. 😉

So please don’t make the same mistake that they did!! They WILL turn out if you just follow the recipe. Unlike a lot of recipes, this is one of those that has little to no wiggle room at all. 😉

I don’t want to sound snooty, or sound like I’m scolding anyone or being mean by saying all of this, but it’s just so frustrating when people can’t wrap their minds around a recipe that is not intended to be spicy-hot nor messed with. I really despise awful reviews given to anyone when people change everything, then blame the recipe poster when it (of course) doesn’t turn out.

If a recipe isn’t for you, then simply don’t make it and choose something else. 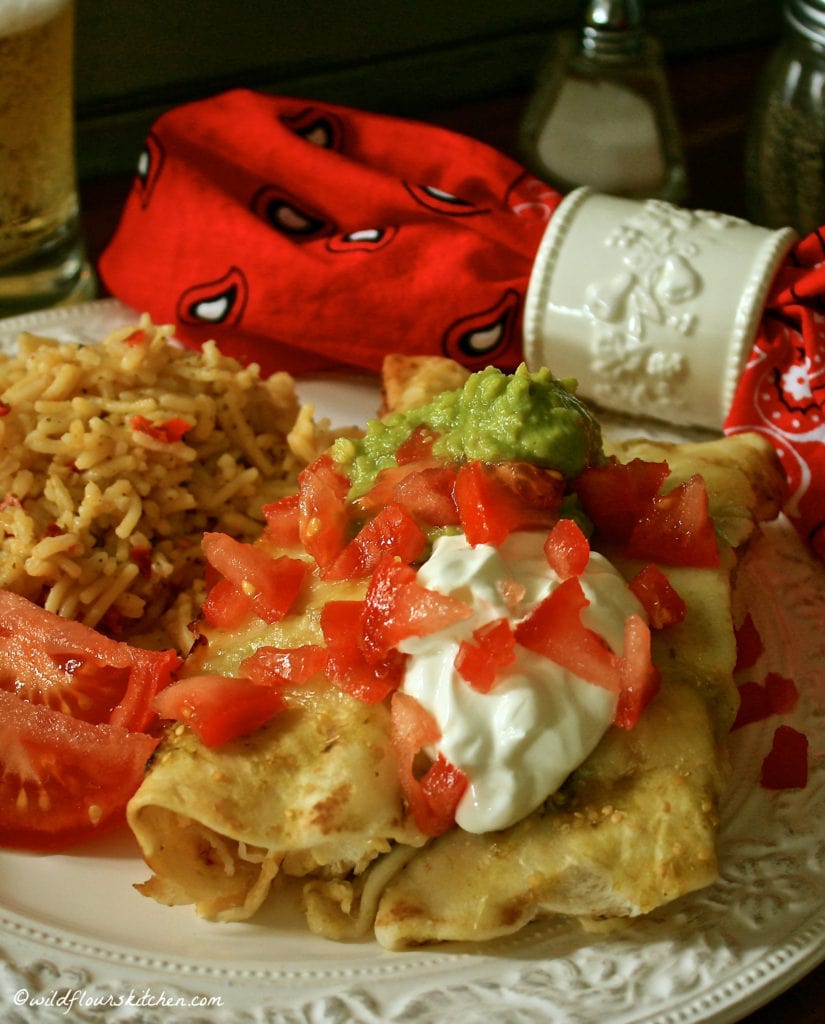 These enchiladas have been enjoyed since I was a little girl, (the original version *here*), and were an instant hit with my hubby! Though they are a bit different, they’re VERY good, simple and easy, rich ‘n cheesy!!,  and I really think that they’ll fast-become a favorite in your house as well! Enjoy….

And keep in mind this little poem….

I didn’t have potatoes,
so I substituted rice.

I didn’t have paprika,
so I used another spice.

I didn’t have tomato sauce,
so I used tomato paste.

A whole can not a half a can,
I don’t believe in waste.

A friend gave me this recipe,
she said you couldn’t beat it.

There must be something wrong with her,
I couldn’t even eat it!

*I strain the reserved chicken broth (that we have saved in the mixing bowl) through a fine mesh wire strainer into a saucepan. Heat to boiling and low boil for 30 minutes until reduced by at least half.
Let cool down, pour into jar leaving at least an inch of head space at the top and chill. Place on lid and freeze for a later use. Great chicken stock!

I love verde, verde is my favorite sweet pea!! This looks amazing!!

Thanks, Didi! I think I like the verde even better than any of the reds! :)