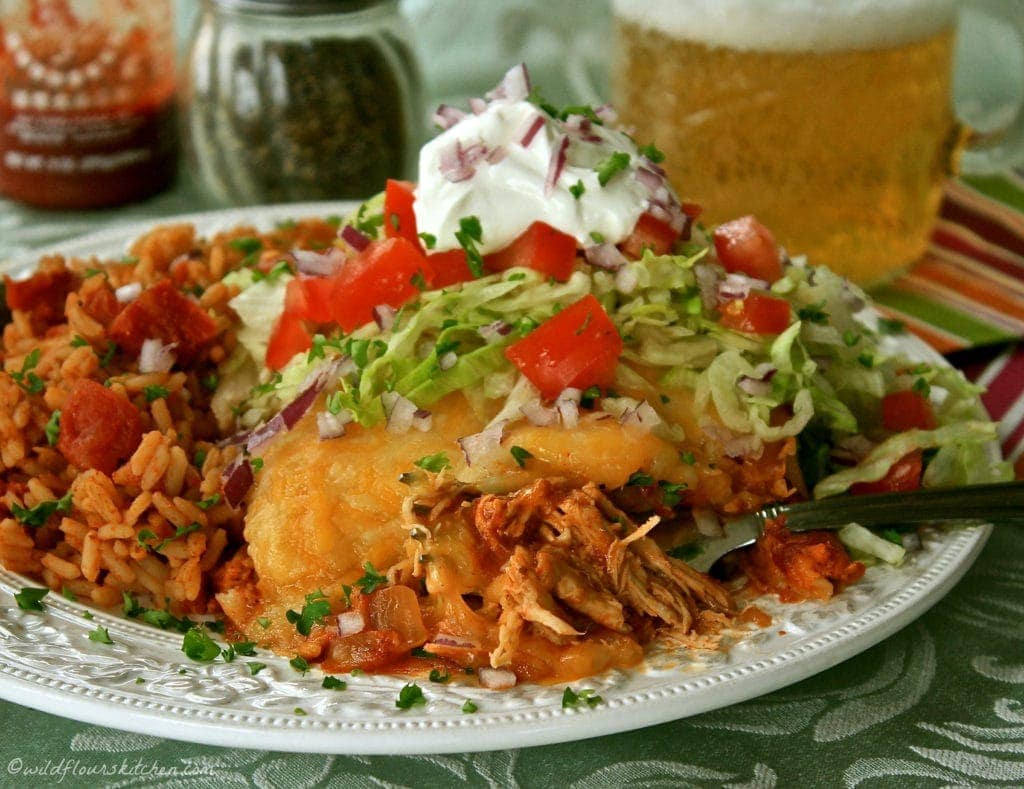 On May 5th, Mexico’s Independence Day, “Cinco de Mayo”, my hubby saw me posting several of my south-of-the-border dishes onto my Facebook page. And at 8am, we rushed into the kitchen to quickly make a change of plans and tossed a few ingredients into the crock pot! He had decided that he wanted some fun Mexican-style food instead of what was planned, and I could not have been happier! We had to put a rush on to get things going last minute, and really had a blast!

He played “sous chef”, opened cans and wrote down the list of ingredients as I tossed them into the crock, and working together, we assembled this dish and got it cooking in about 15 minutes! Now THAT’S teamwork!! 😀

Because we were pressed for time, I didn’t take very many pictures. I have some crock pot photos, but it’s just chicken in red sauce, and they didn’t turn out well. I didn’t think that they were really needed, so here’s a shot of the dish after the meat cooked, the tortillas were assembled, and everything baked in the oven to finish up! 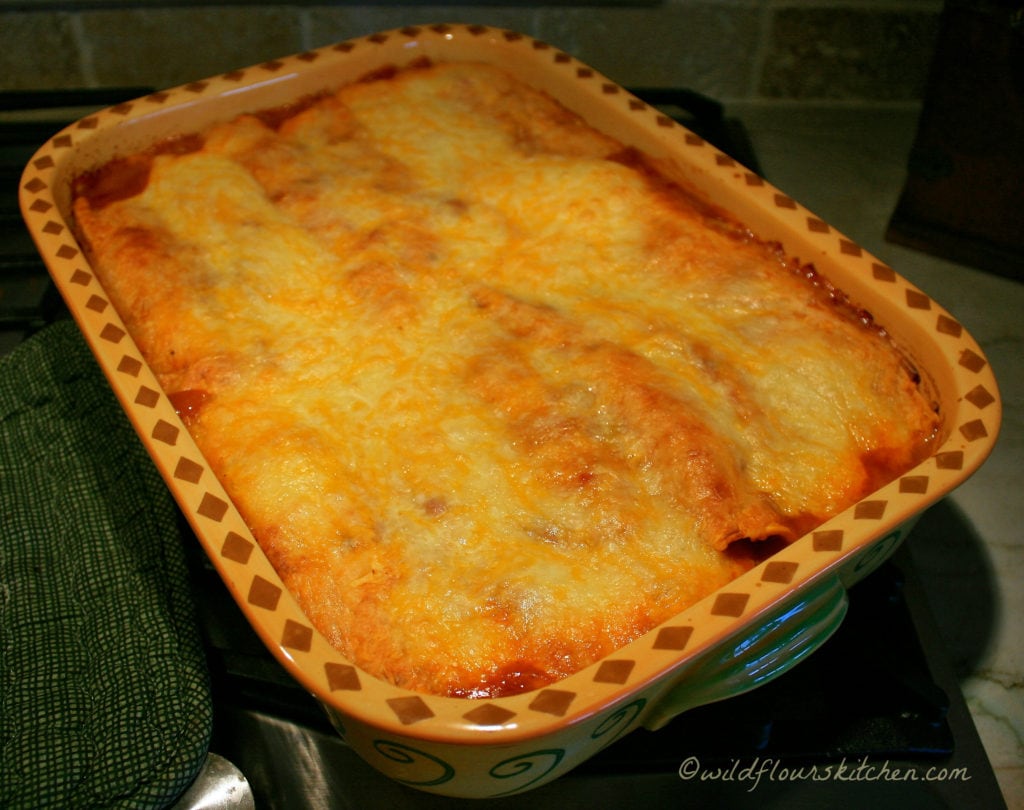 I had simply added a main ingredient that the hubs has always sworn that he doesn’t like – – red enchilada sauce. I just quickly added everything, and was bound and determined to prove to him, that yes, he does in fact like it, he just doesn’t know it yet. 😉 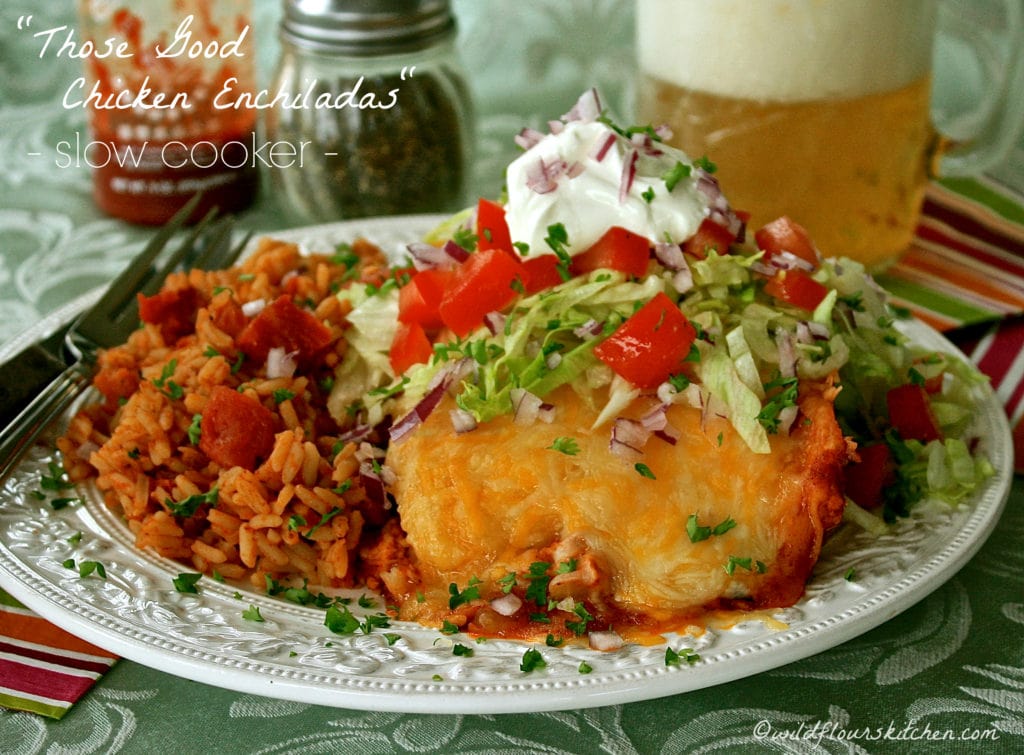 And yep. He kept saying over and over how wonderful they were, how authentic they tasted, and after 12 years of trying my best to convince him….I finally succeeded.

Soooo many more recipes to come…… 😉

I also snuck in some spicy refried beans, too. 😉 I love adding a little to use as not only an extra flavor ingredient, but also as a “glue” to hold everything together a little better.

After pouring the sauce that the chicken cooked in (under and over) the enchiladas, they then got some big handfuls of cheese!!!!!

It’s best to just smother these. They bake better, and who doesn’t LOVE cheese??

Lastly, just serve these babies up with whatever toppings float your boat. We went with the basics – – shredded lettuce, chopped tomato, finely chopped red onion, sour cream and guacamole for my hubby! I finished the plated nicely with a little finely minced fresh parsley for that “professional look”, but you could go with cilantro if that’s what you like.

I added just a simple side dish of Spanish Rice from a box that I doctored up, and Cinco de Mayo turned into a little fiesta on our plates!!

SO easy to toss together, super easy to assemble, then just a quick trip in the oven, and you’re all set!!

Seriously, just make this.
And don’t take any lip from anyone.

They’re really good, and everyone will love them. 😉

To "Soft Fry" tortillas: I keep a small dish of oil next to the heated griddle. Paint a little oil onto the pan, and add a tortilla. Fry until poofed and very lightly golden browned, turn, repeat, then place between paper towels to keep soft, warm and pliable. Continue until all are done.
Though I used flour tortillas for this, you could certainly also use soft white corn tortillas if you prefer. (I LOVE them, but the hubs, not so much). I'll work on him. 😉

Yummmmm! Wish we would have had Cinco de Mayo at your house! What a perfect dish for the day :)

Thanks, Kris!! :D You'd be most welcome!

I know my family will absolutely love this! Thank you so much for sharing this Kelly! ♥ Pinning and sharing!