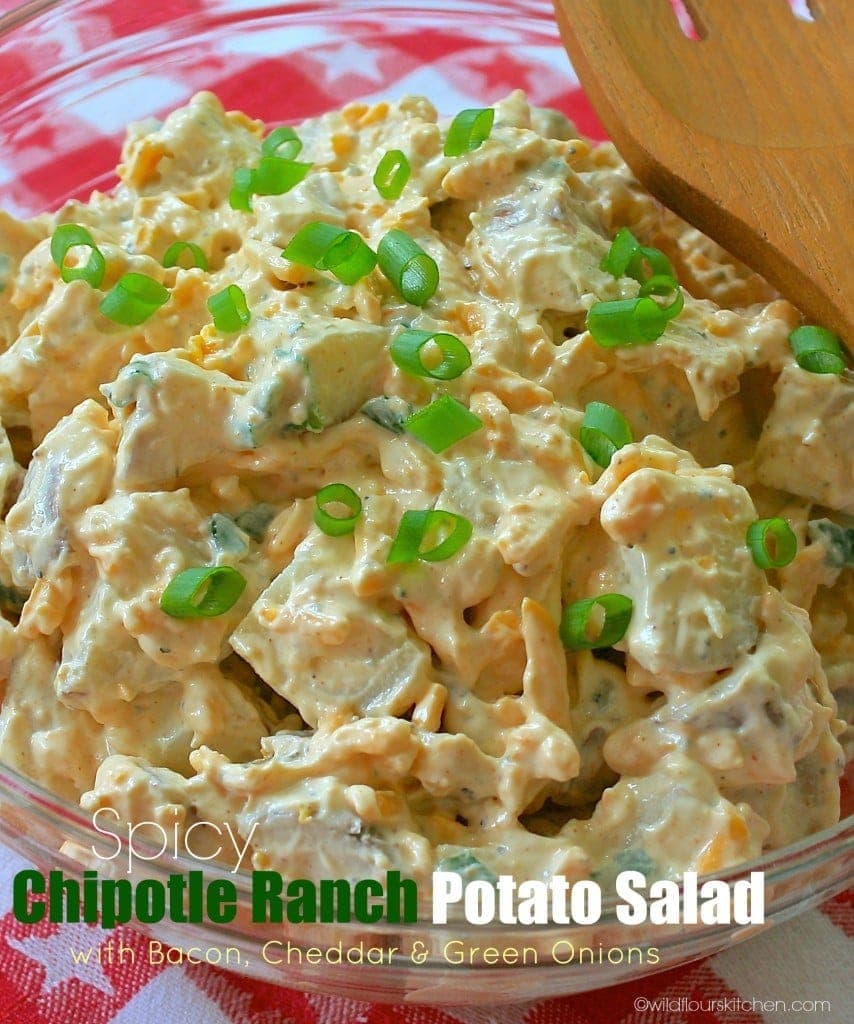 The “dog days of summer” haven’t been very cruel lately, thank goodness!! We’ve had a bit of a break from the awful heatwave we’ve been in, and the weather has been absolutely stellar!

So I planned a quintessential summer supper for us complete with beer can chicken, corn on the cob grilled right in the husks, cantaloupe and watermelon, and a new potato salad!

This is truly THE FIRST potato salad that my hubby has actually loved! He’s never cared for it much, and some potato salads he won’t eat at all. So this was a VERY happy and surprising first!

I didn’t want to do just the plain ol’ regular Bacon-Ranch salad, I wanted more. Lots of fun goodies in there! I’m greedy like that. 😉 I wanted cheese, the sharper the better, and lots of it! I wanted the crisp crunch of celery and the bright bite of fresh green onions snipped straight from my garden.

But most of all, I wanted it to have an extra kick!

Something to set it completely apart and has you saying, Wow!, this isn’t my mama’s tater salad! 😉 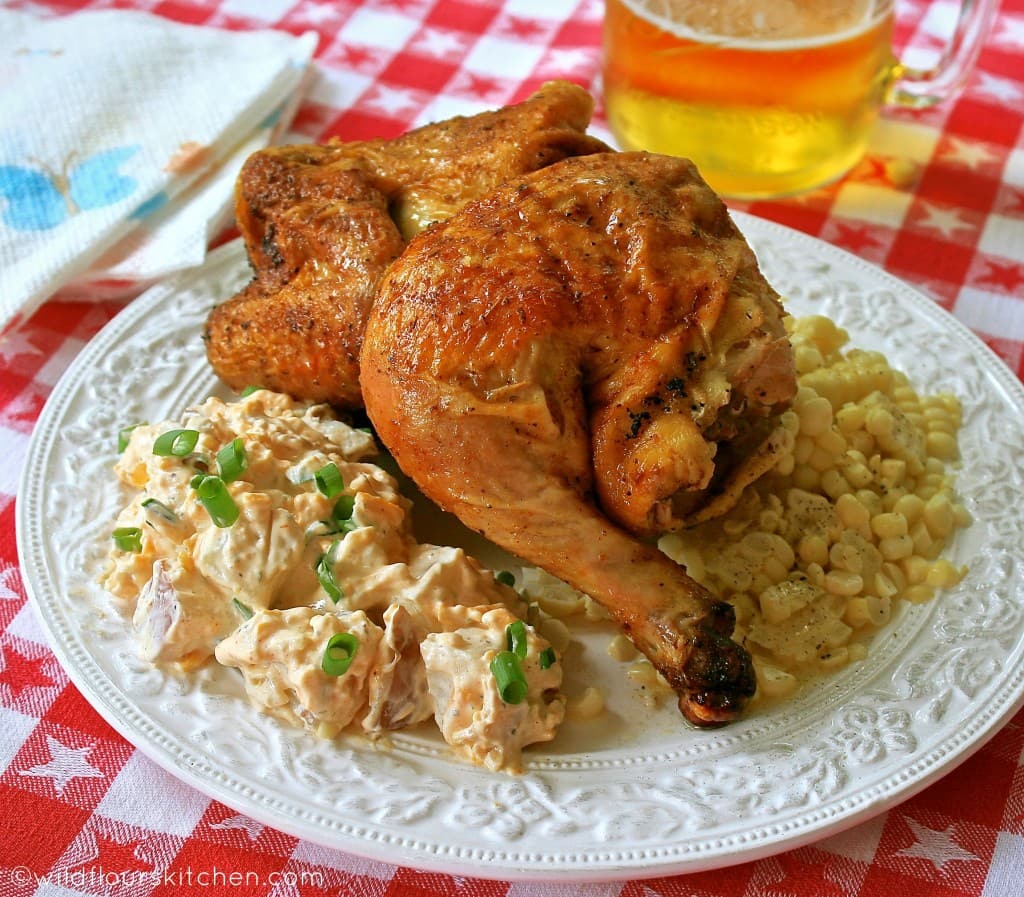 So I snooped through my own kitchen cupboards, and spied two of my favorites….creole seasoning and chipotle chili pepper powder! Not to be confused with regular chili powder. This is made from chipotle chili peppers, and packs quite a punch! So use it sparingly until you get used to it. Especially for those who are sensitive to too much spicy heat.

Anyways, I thought, THAT ought to kick it up a “few” notches! 😉

I didn’t want us running for the hose with our tongues on fire, but I did want a few sparks. 😉 Just lots of extra flavor and added depth. Enough to make it a whole lot more fun and interesting! 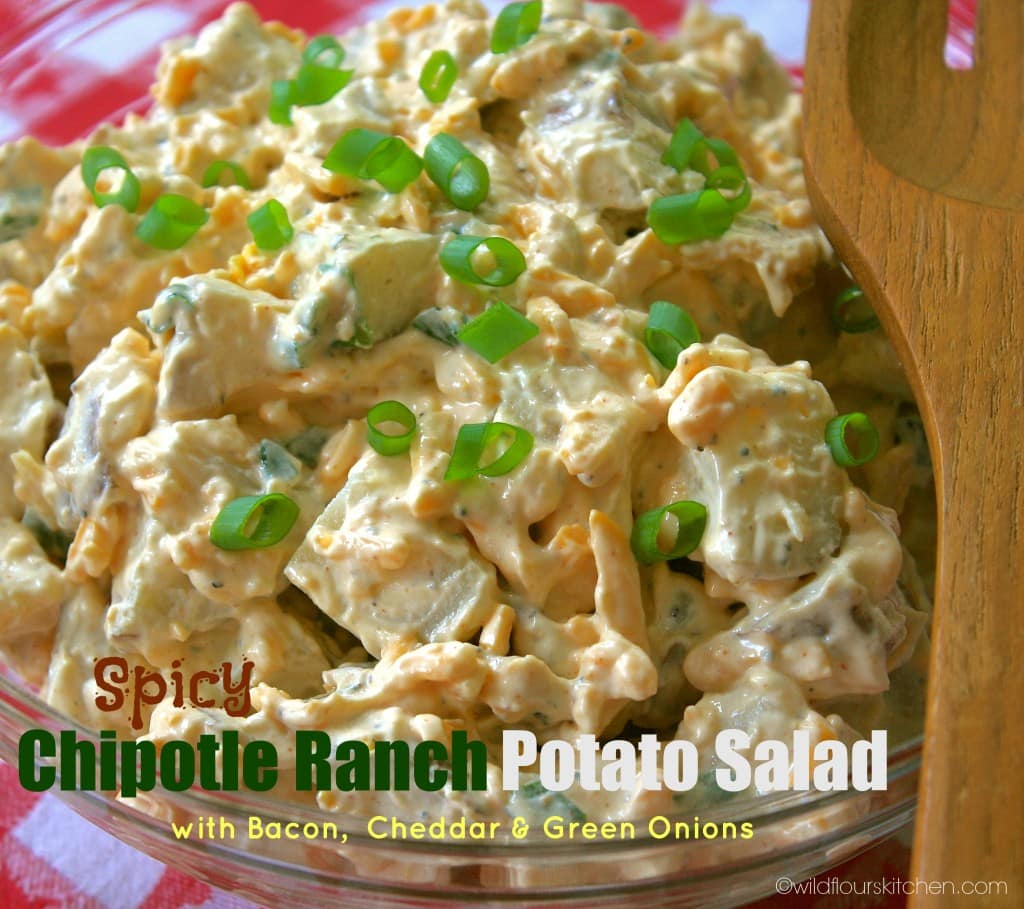 And those two little bottles really rocked it out! Not too hot, but a really nice, spicy flavor to make your tongue sing and dance, not scream bloody murder running in place cartoon-style, chugging milk straight from the plastic gallon container! 😉

So if you’re looking for a way to perk up your potato salad, pick up a few new bottles of spices, (if you don’t already have these on hand), and give this potato salad a try! TRUST me, if my hubby fell in love with it, you certainly will, too. 😀