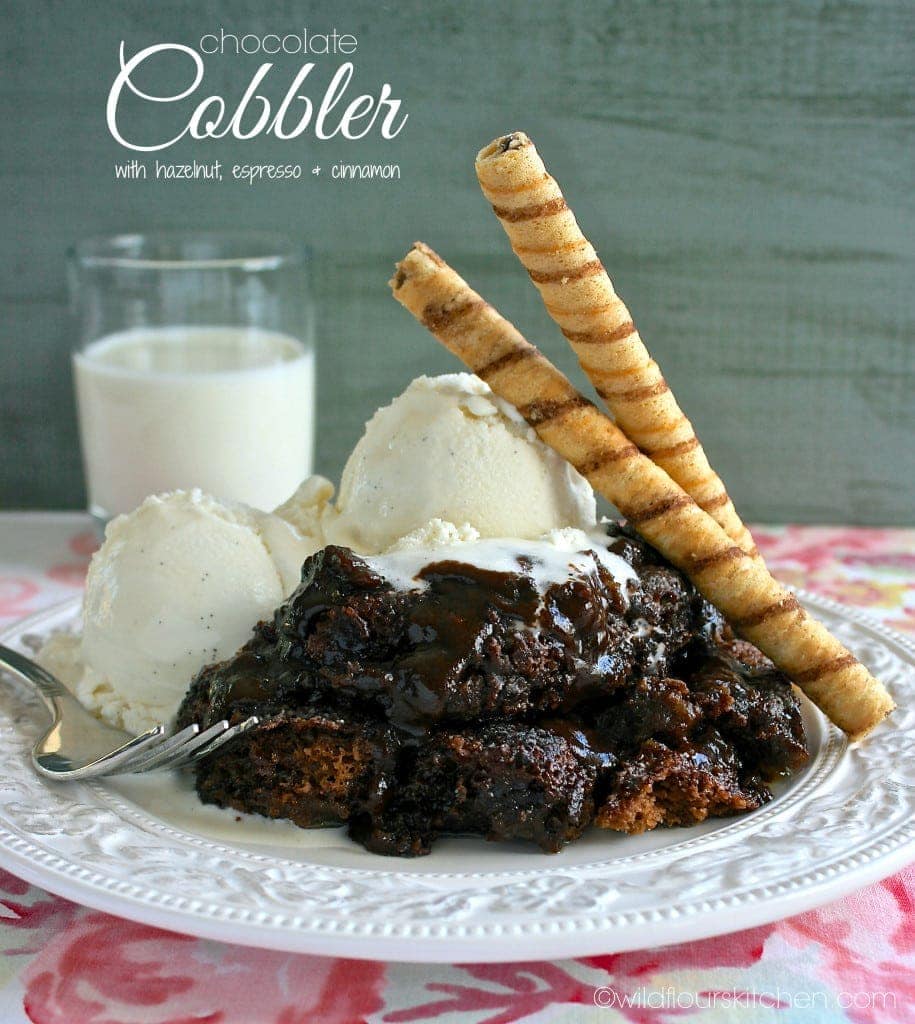 Many, many years ago (gawd I sound old), I used to enjoy and love to make what was simply called, “chocolate cobbler”. It was made the same way that most cobblers are made, and the same way that I make my fruit cobblers such as peach, only it’s made with chocolate!

It’s phenomenal. It’s actually a good comparison to “lava cakes”, only made in a 13×9 pan. And it’s history is WAY before the accident that produced “lava cakes” ever happened. Lava cakes happened when someone had their oven turned up too high and their cake was baked on the outside and literally raw on the inside. When they went to cut into it, uncooked chocolate cake batter flowed out. Hence “lava” cake.

Because they became so popular, there’s a dispute over who made the first “mistake”. A New York Chef or a Chef from France. Silly, isn’t it?

But here’s the REAL joke. They are both (basically and essentially) wrong because this dessert goes back much farther than the 1980’s. And it’s no accident! 😉

Leave it to home cooks in humble kitchens without fancy culinary degrees to figure it out first and foremost. 😉 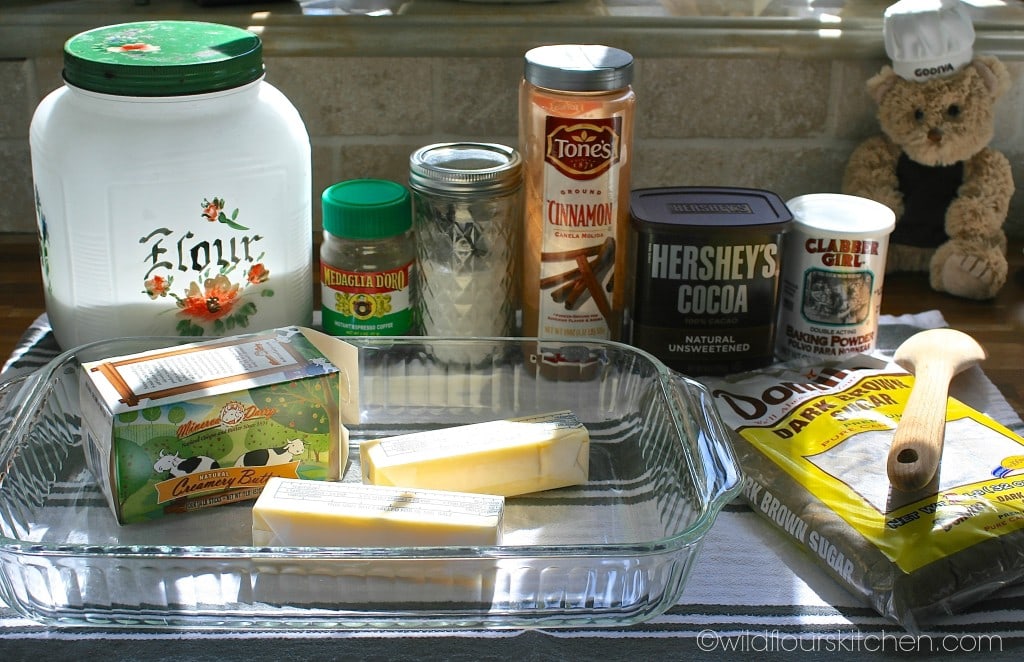 So I took one of my childhood favorites and kicked it up a bit. 😉

It’s such a special dessert, that I wanted it to really shine and be something so spectacular that you could leave your guests both baffled and in awe. 😉

I mean  – –  a chocolate cobbler? That’s a conversation starter right there. 😉 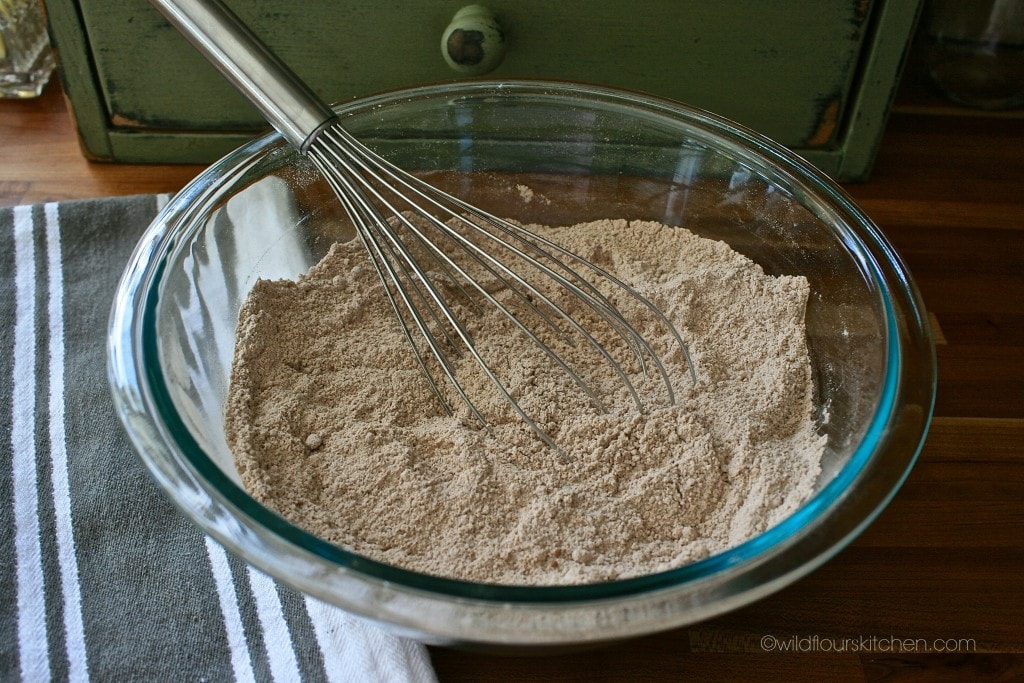 There are three main parts to old-fashioned cobbler. A butter base, a batter and sweetened  fruit. This has a bit more, but the same exact concept and end result.

It starts with a batter…..

of which I’ve kicked up a notch with hazelnut-flavored Frangelico Liqueur, cinnamon and dark brown sugar. 😉 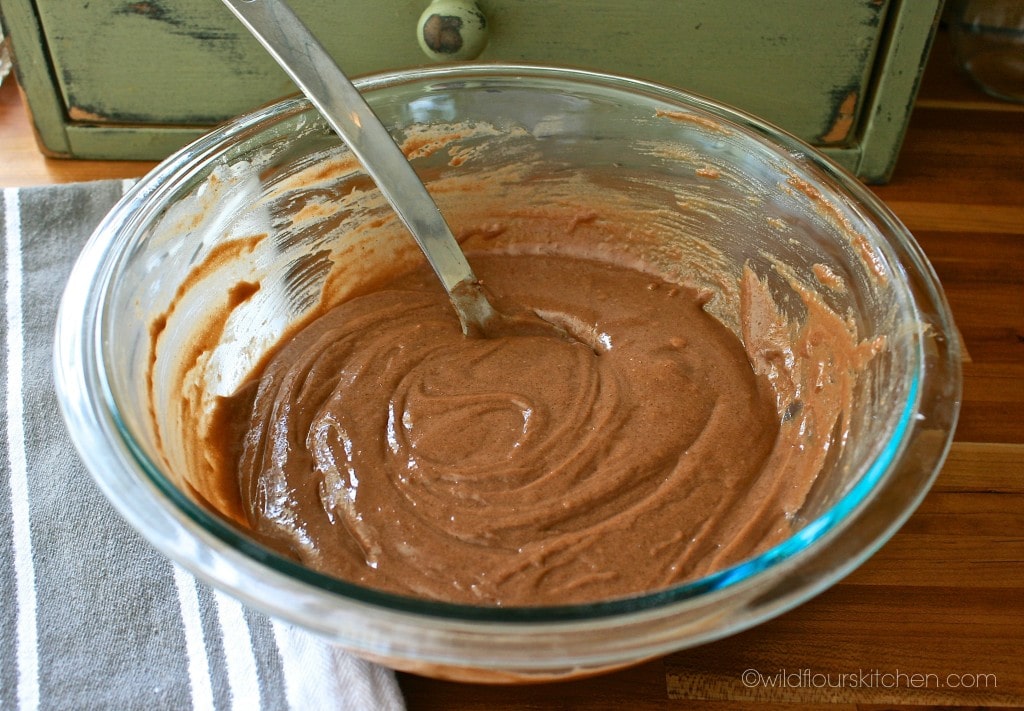 Then there’s a sprinkling of a dry cocoa mixture to help absorb all of the other layers and form the rivers of chocolate lava. 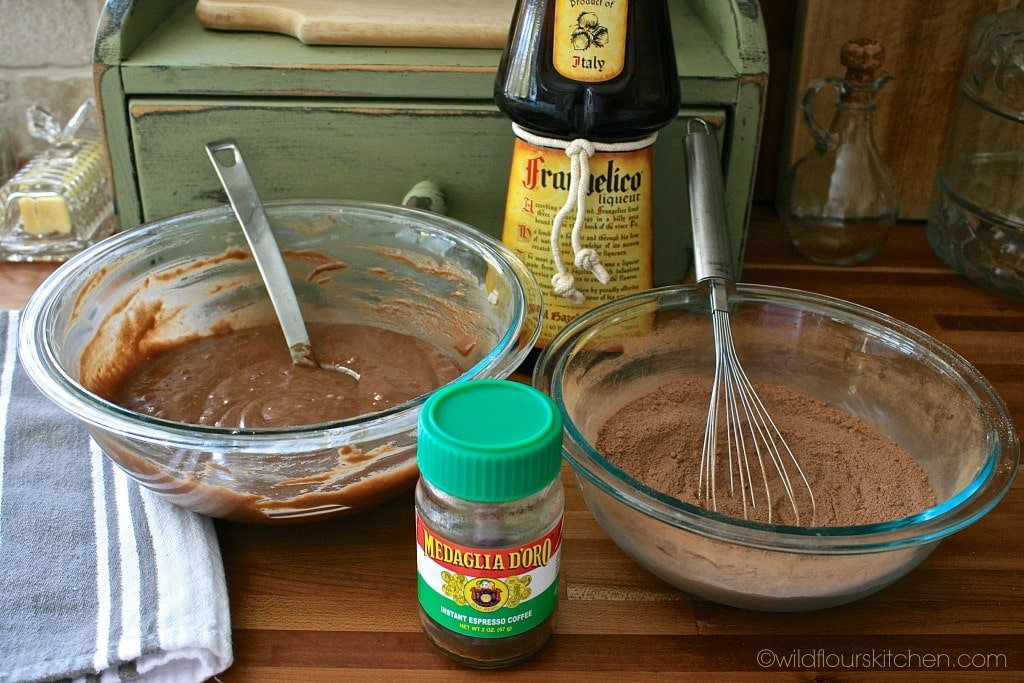 The third element is the boiling hot water. I turned this part into an espresso and hazelnut concoction that I could’ve about just drank from a glass! 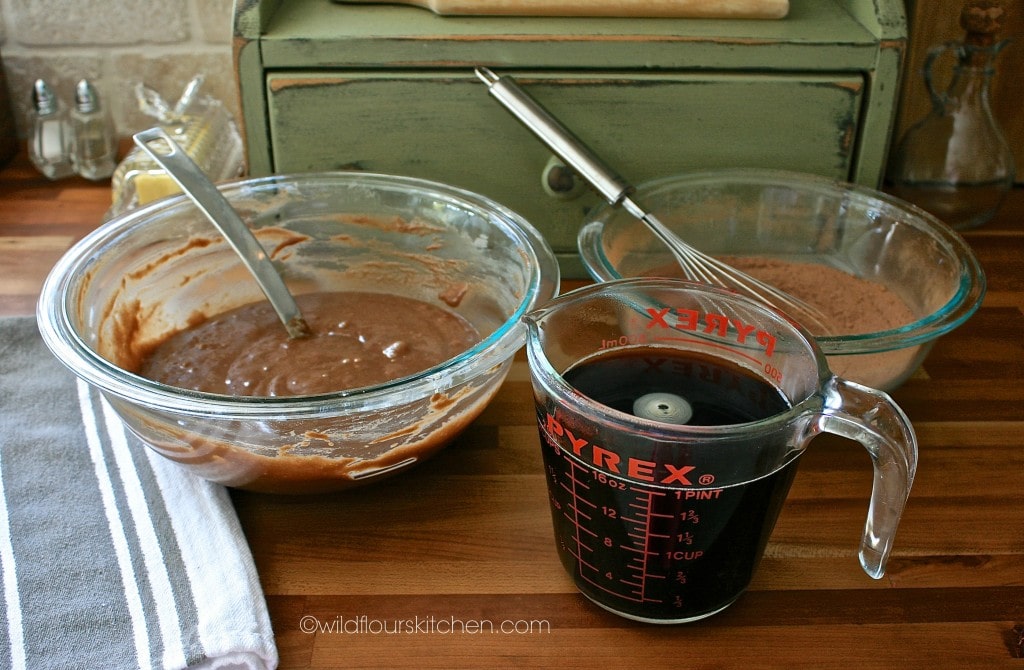 All three of these get poured and spooned over butter melted in the oven in a 13×9 baking dish. 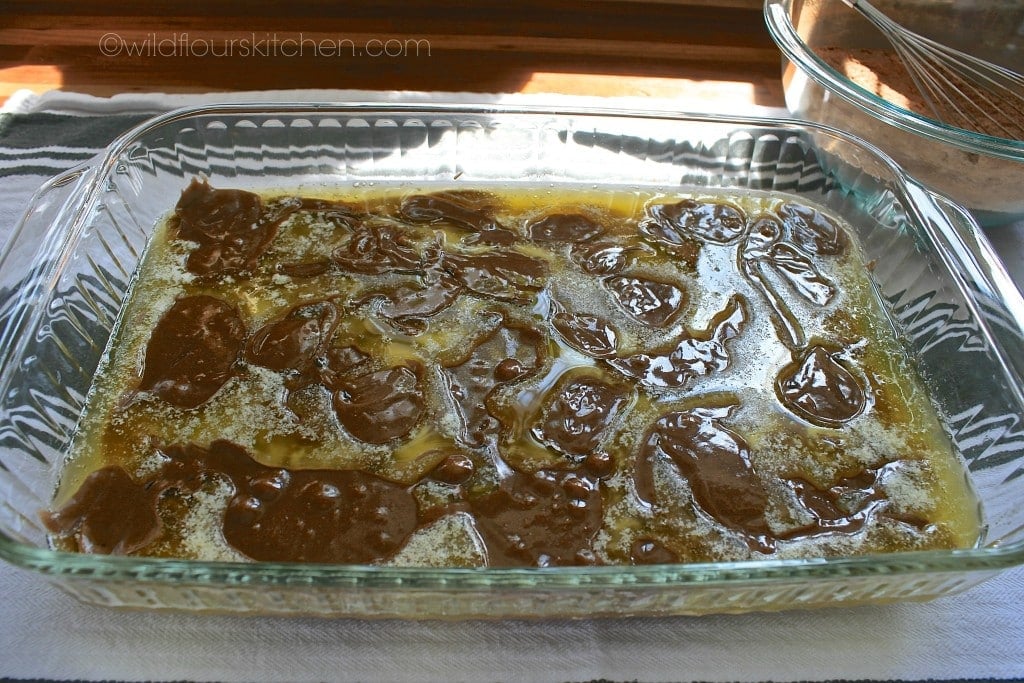 First the butter is melted, then the batter is spooned and drizzled around on top of the butter, also not stirred. 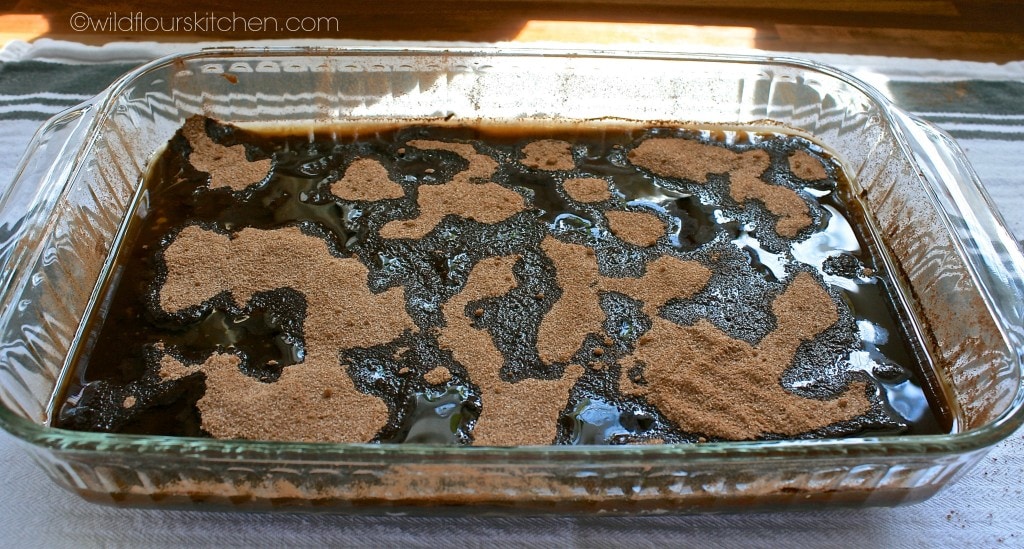 Next the dry chocolate mixture is sprinkled evenly over the butter and batter. 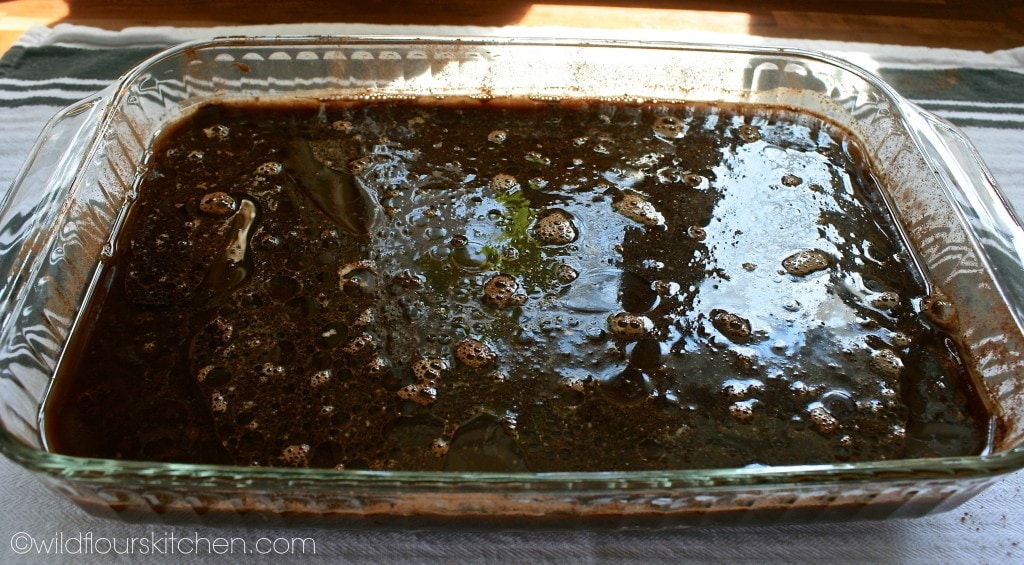 Lastly, the boiling hot espresso and Frangelico mixture is evenly poured over all. Again, no stirring! 😉 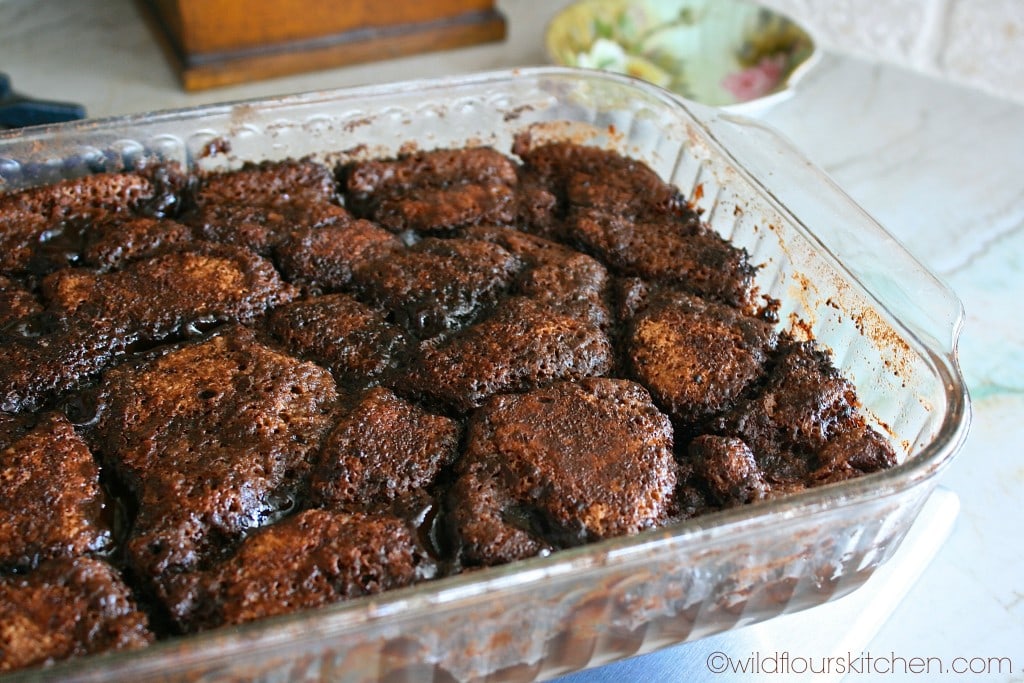 It all bakes in the oven just like regular cobbler! It comes out of the oven looking like dark chocolate cobblestones with rivers of hot, melted, chocolate lava running through! 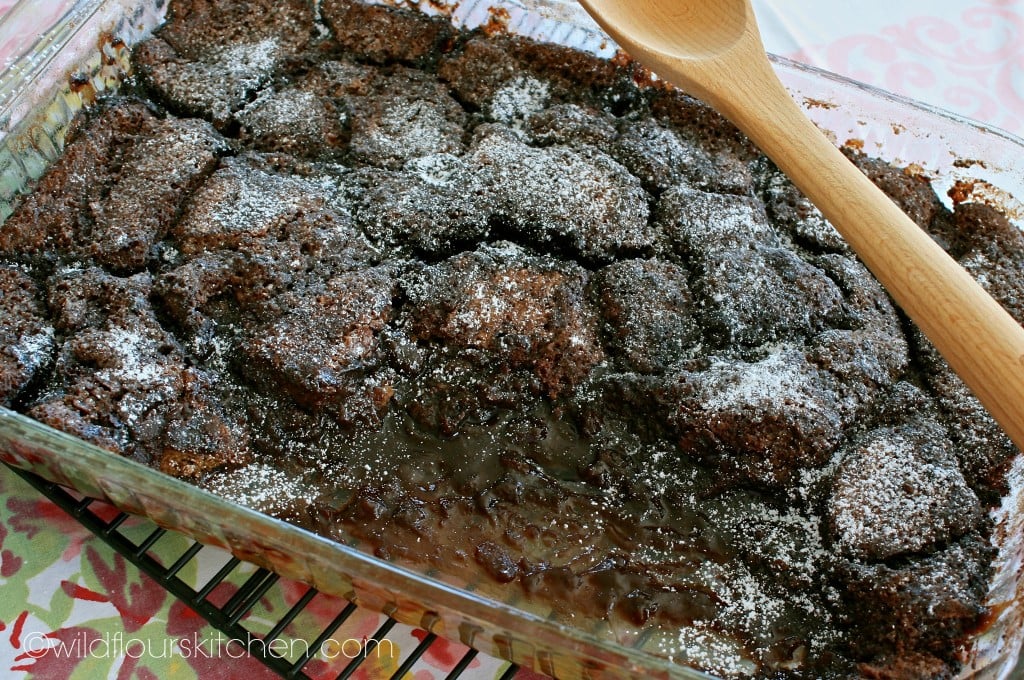 It isn’t the prettiest “naked”. (Are any of us? LOL!) So I like to start giving it a little extra dressing. 😉

Even just a dusting of powdered sugar does the trick to get it to the table! 😉 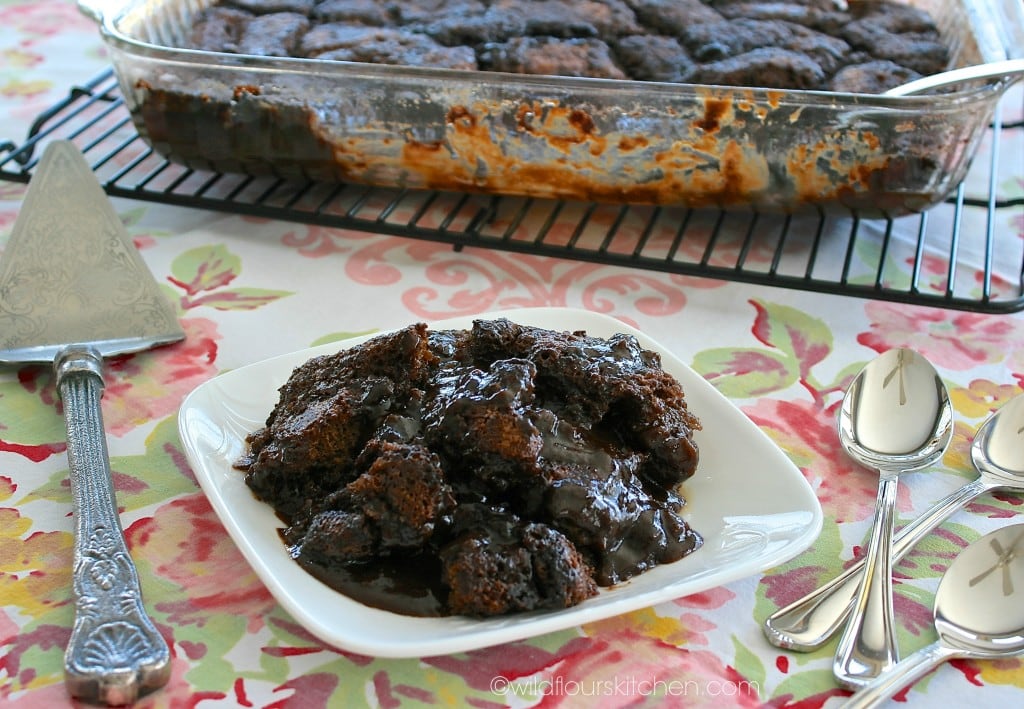 Look how ooey gooey chocolatey it is!!!!! And the “cobblestones” are just like mini chocolate-espresso cakes with a slightly crispy-sugary crust on top with a delicate crunch! (It’s SO AMAZING!!!) 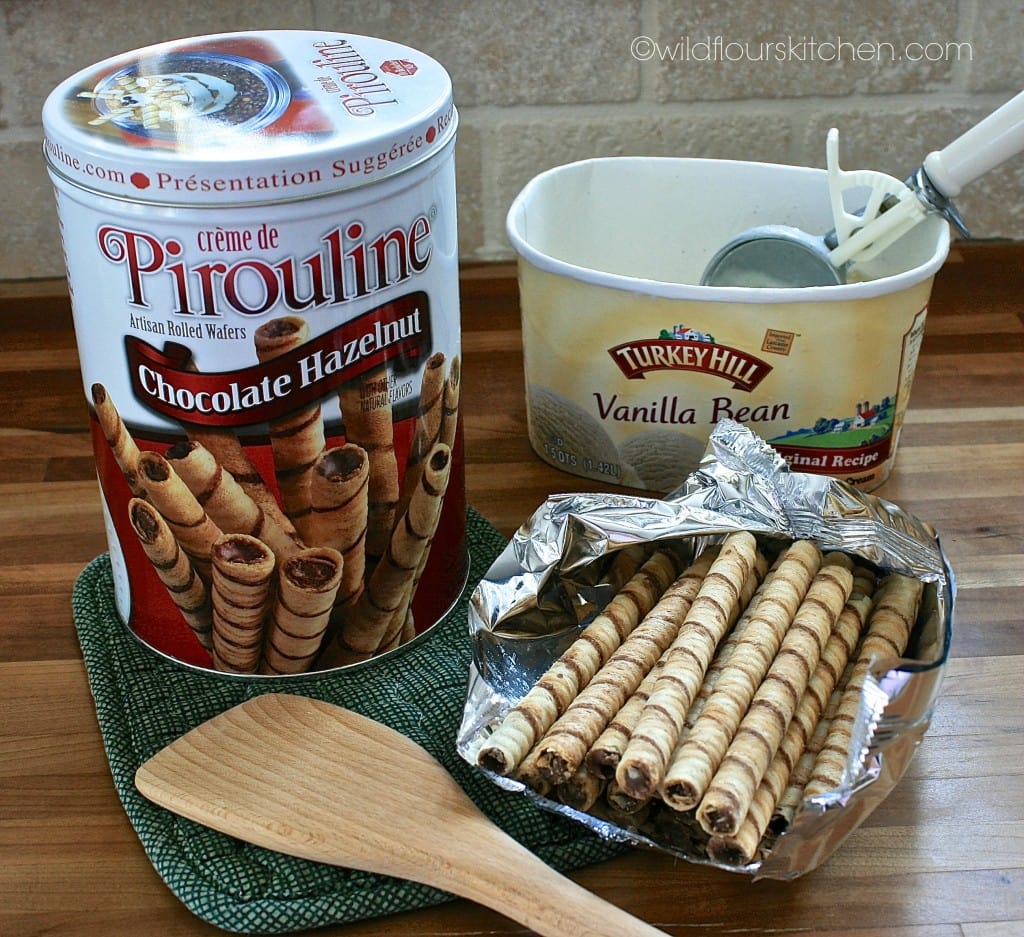 But I don’t stop there! This warm cake-like cobbler with chocolate lava also gets a royal wardrobe of vanilla bean ice cream, and chocolate-hazelnut piroulines! 😉 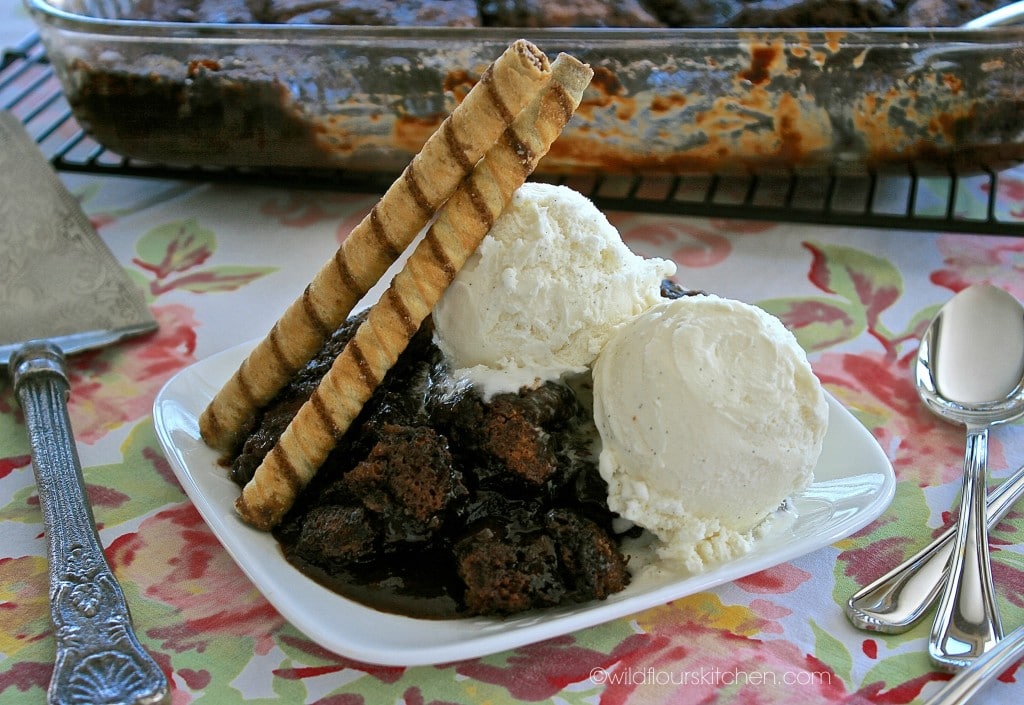 You could even add whipped cream, more powdered sugar, grated chocolate and even a cherry on top, but we enjoy it just like this. 😉

It’s quite a show-stopping presentation and so very easy and simple!

So if you, too, enjoy OLD-school recipes that you can bring back and revamp into something that’s company-worthy, yet easy as can be, you will really be wowed by this one. Trust me, it’s a keeper. 😉 Hope you all enjoy! Take care!