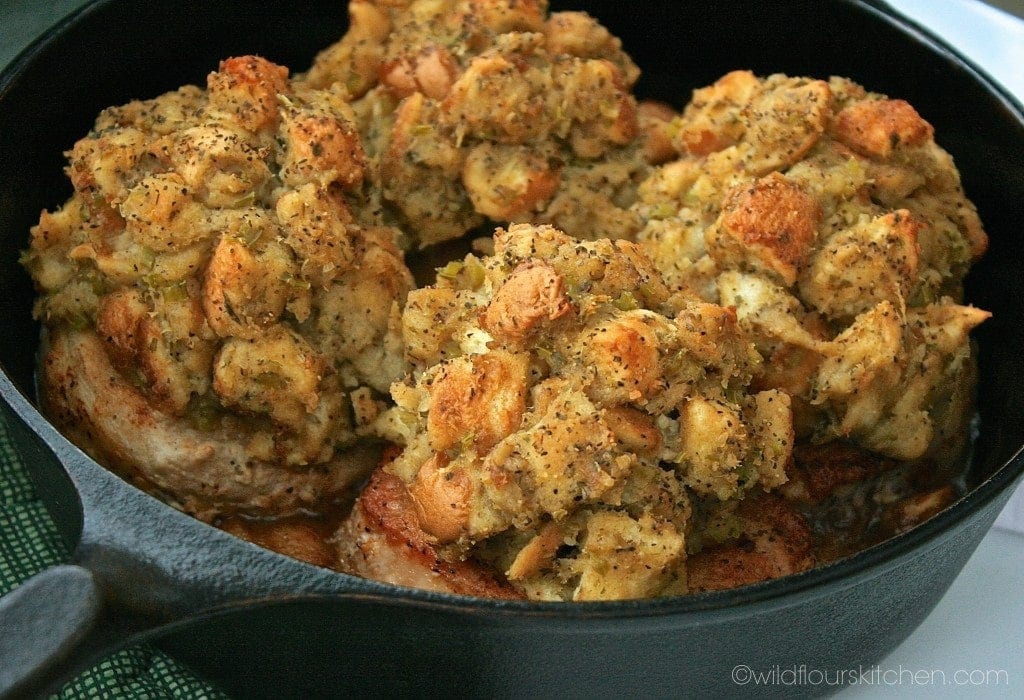 It’s funny how the simplest things when we were kids and teens were such a treat! The OLD versions of Kraft Macaroni and Cheese, Rice-a-Roni, Shake ‘n Bake, Jiffy Pop Popcorn, and even TV Dinners! Especially on nights that our parents actually went out and saw the latest movie playing in town!

I don’t know if it was a good thing, or a really bad thing, (most likely the latter), that convenience items really started taking over. But I know they sure were a huge help in the kitchen!! Unless you were lucky to stay home all day long, you just plain didn’t have the time to cook everything from scratch. Weeknight dinners were simple. But, oh so good!

But those convenience items that I used to love, have changed over the years.

Flavorless, except for the handfuls of salt, and loads of crazy ingredients that you cannot even pronounce. Yuck.

So after the last box of instant stuffing mix that I bought years ago tasted like cardboard, I decided that it was time to just figure it all out.

The results were darn near close, if not spot-on. We both LOVED it and it was so simple it was ridiculous. No more boxes allowed in this house. 😉  It’s just too easy to make homemade. 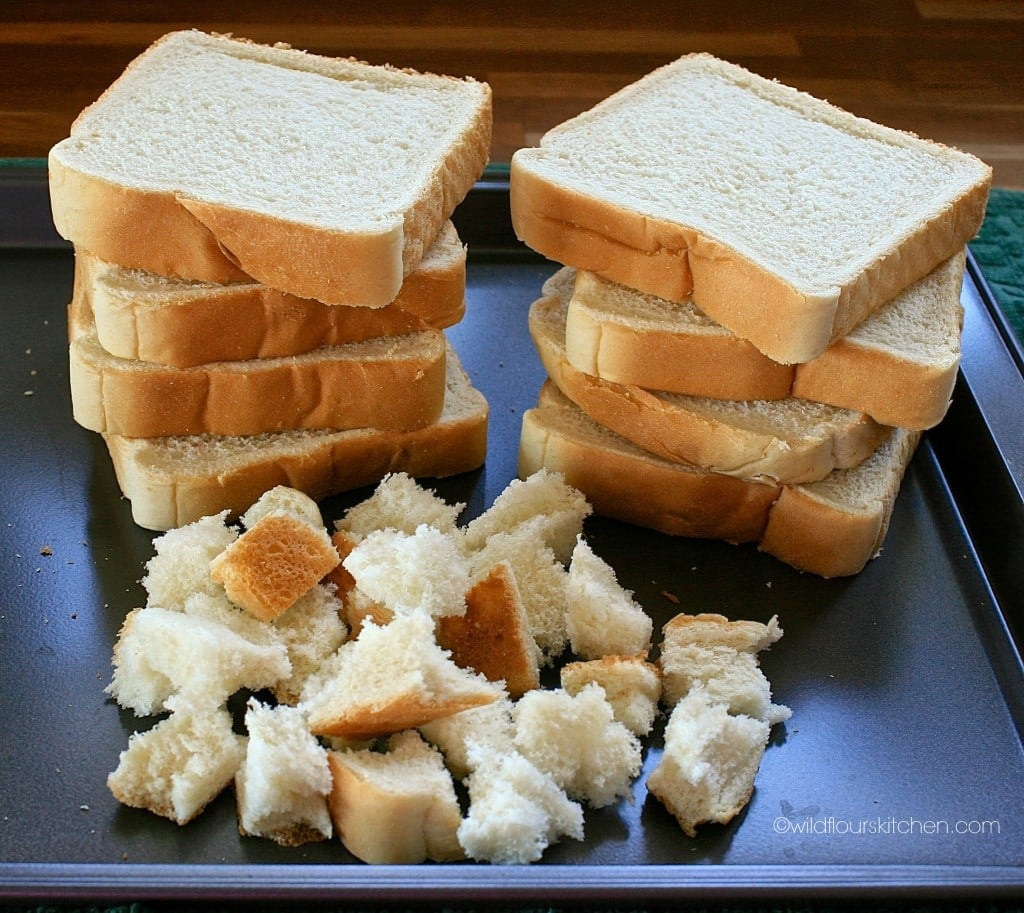 I started with some thick-cut Texas Bread and tore the pieces into nice, big chunks. You can use regular bread if you’d like, but this held up really well. (If you’re going to use regular bread, you’ll need about 15 slices.)

I dried the chunks overnight until they were very hard, but you can take it a step further after drying, and toast them as well. 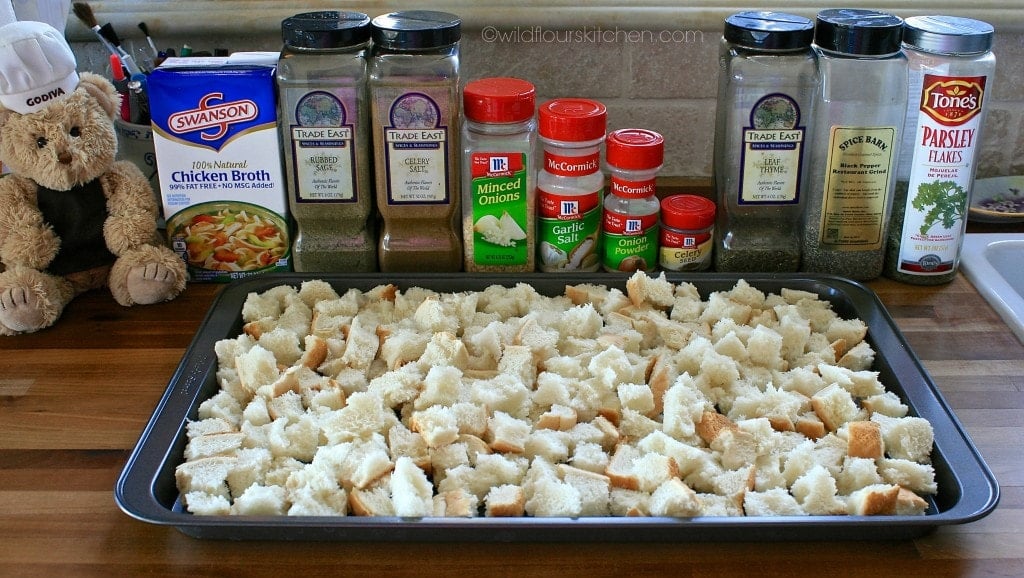 Most of the ingredients that went in! The only thing missing from the photo was the butter, celery, ground rosemary and chicken bouillon base! 😀

*I highly recommend that you use ground rosemary powder. No one likes the roof of their mouth impaled with sharp needles. 😉 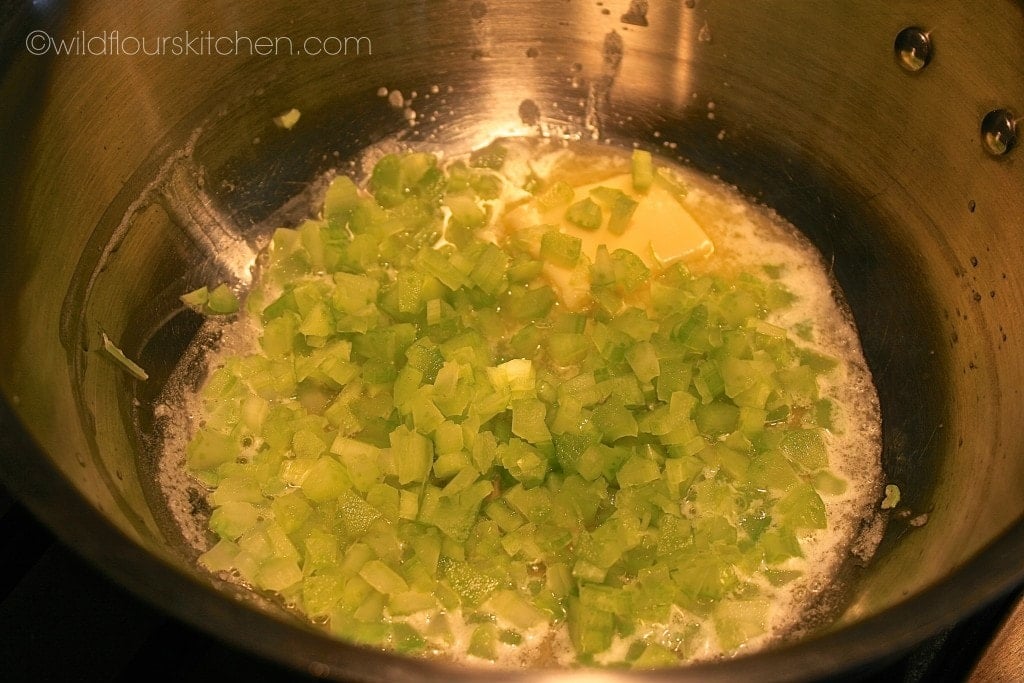 Though the old stuffing mix used dehydrated celery, that’s where I drew the line. So I simply sautéed a little in some melted butter.

Then add all of the herbs and spices, the bouillon base, and the chicken broth and simmer it like we used to do years ago! 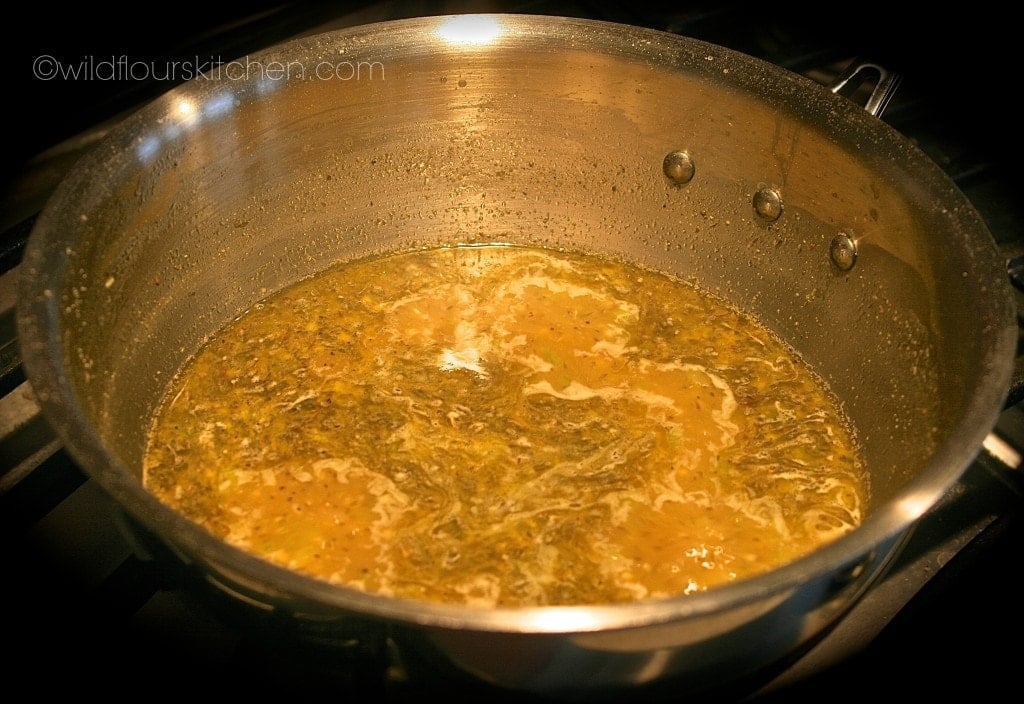 Then just add the dried bread cubes, toss, cover, and let it sit for awhile. Then just give it a fluff with a fork, and leave the lid off for a few minutes so that it doesn’t get too wet. 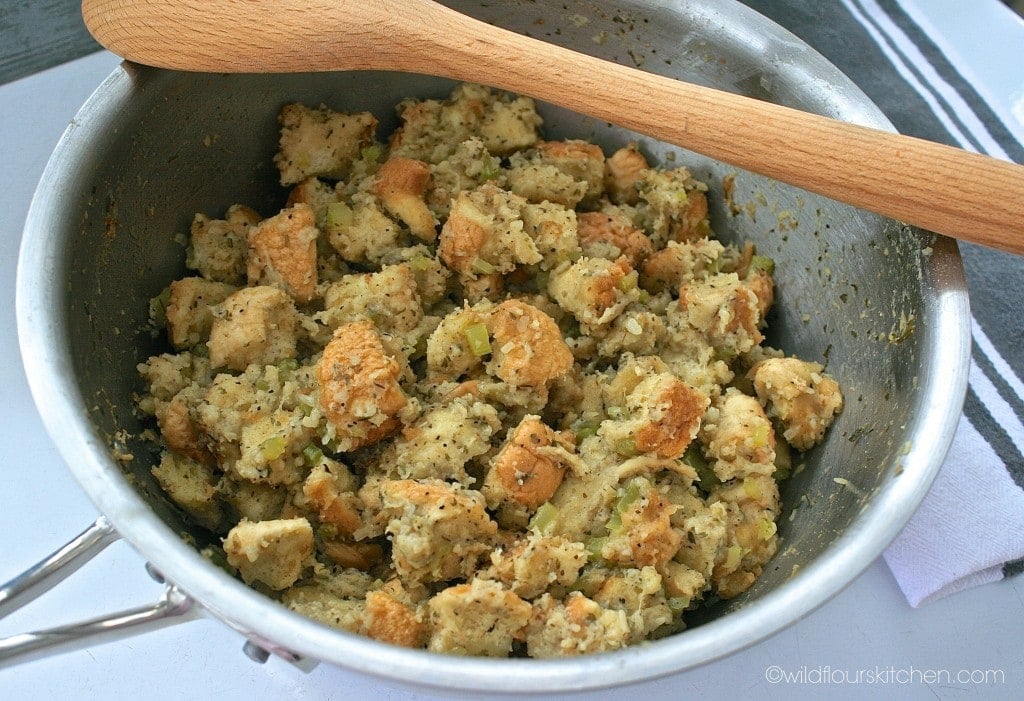 And wa-lah! Old-fashioned boxed stuffing just like it used to be, and just as easy homemade!

You can enjoy this just as it is, semi-soft, or you can pop it into a baking dish and bake it uncovered to crisp the top! But I didn’t do this because it was going on top of another dish and going to get baked all together later. 😉 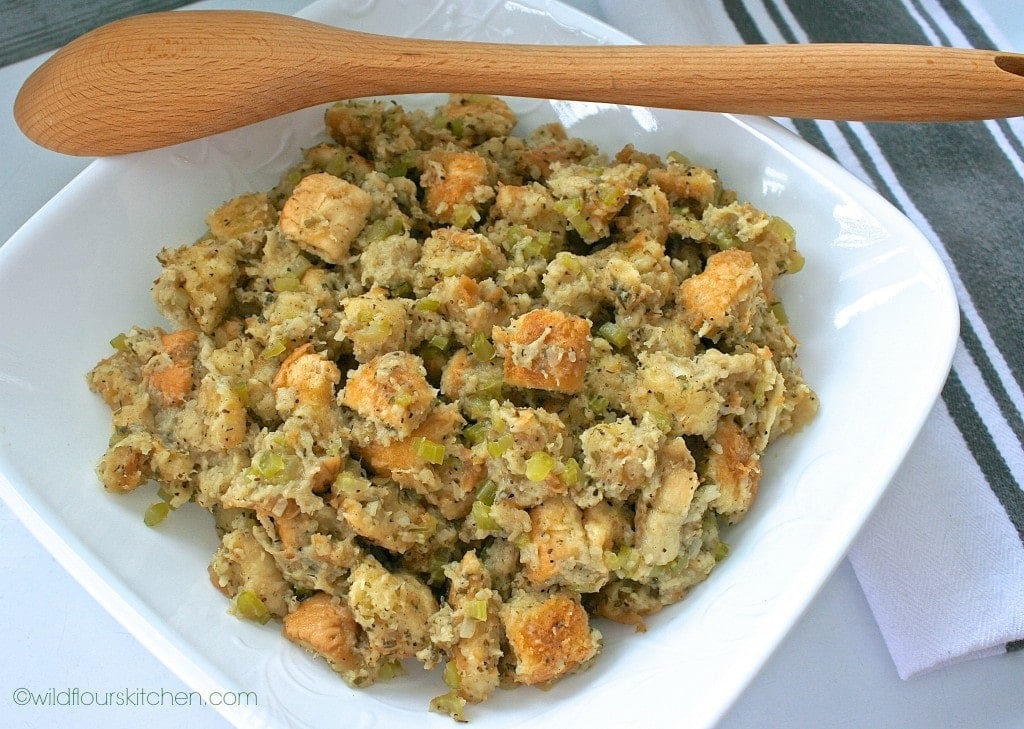 This is what it will look like after baking! I like to give a good sprinkle with coarse ground black pepper on top before baking! 😀

So if you’re longing for the boxed stuffing with all of the flavor like had when we were growing up, none of the additives and preservatives, and costs pennies to make, look no further! This is it!! It really came out delicious!! 😀

If you’re a bit sensitive to salt, just omit the garlic salt and add a small pinch more garlic powder if you’d like. We LOVED it this way, but I fear it may be a tad too salty for some palates. So just make small adjustments to suit your own family’s tastes. 😀

And that’s it folks! I hope you enjoy making this recipe for years to come! It’s quick, easy, and packed with flavor! *Be sure to come back tomorrow to see what I used this stuffing for! A wonderful dish that you’ll want to make soon! 😀

Update! You can swap out the bread for soft, store-bought cubes if you’d like and bake this. To make it old-fashioned style, that holds together like Grandma made, just add 2 beaten eggs and bake in a sprayed or buttered casserole dish, covered, for about 30 – 40 minutes at 350º).  Here are photos of what it looks like when done. 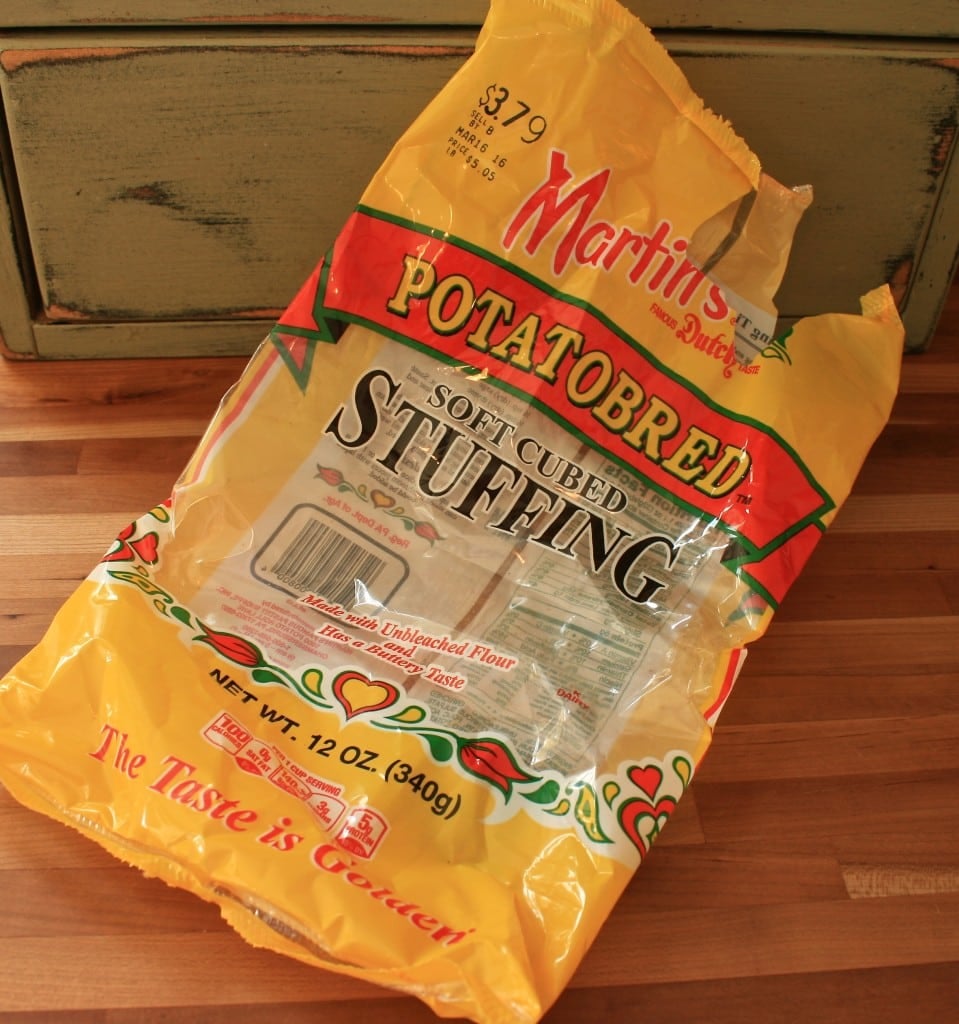 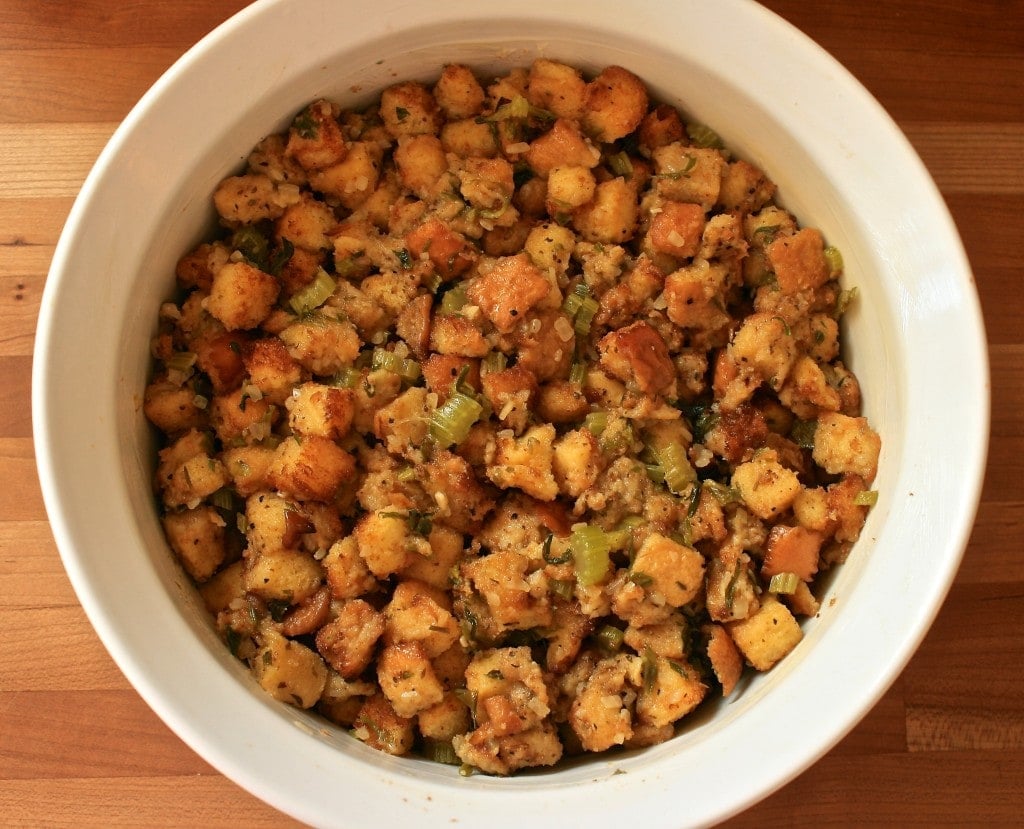 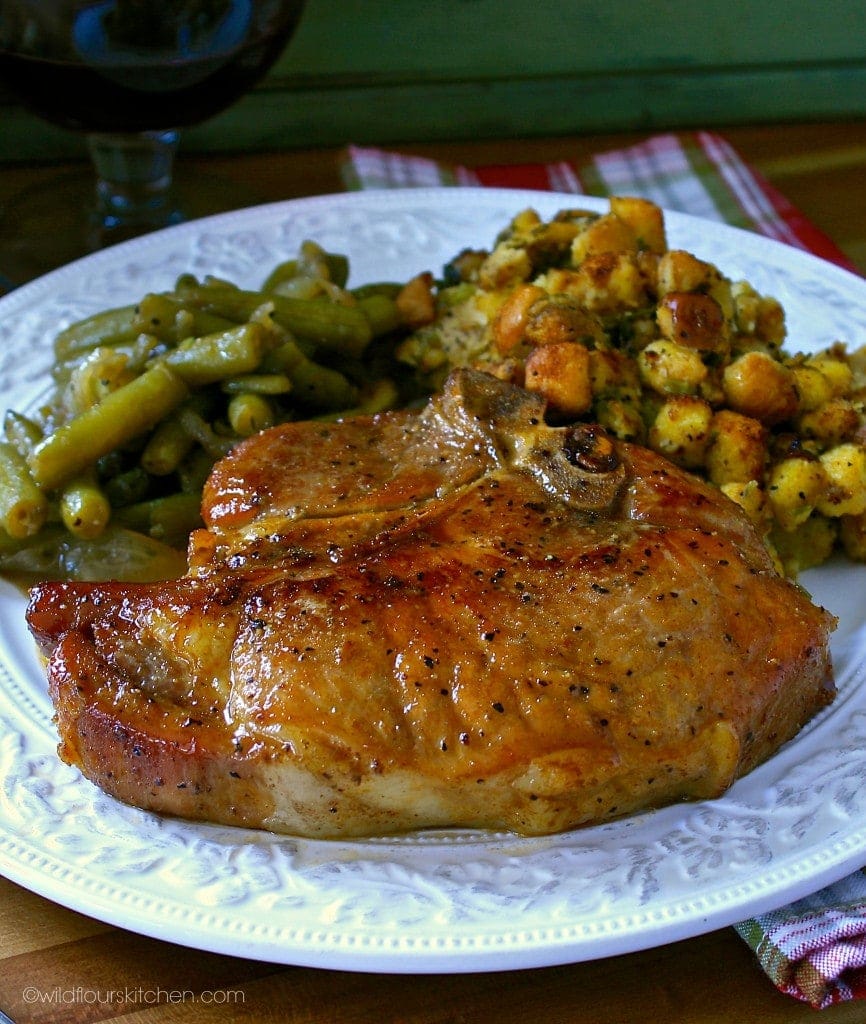 If using regular bread, you'll need about 14-15 slices depending on thickness and density of bread. (Extremely airy breads not recommended, as I would think that they will get very mushy, even dried and toasted.)