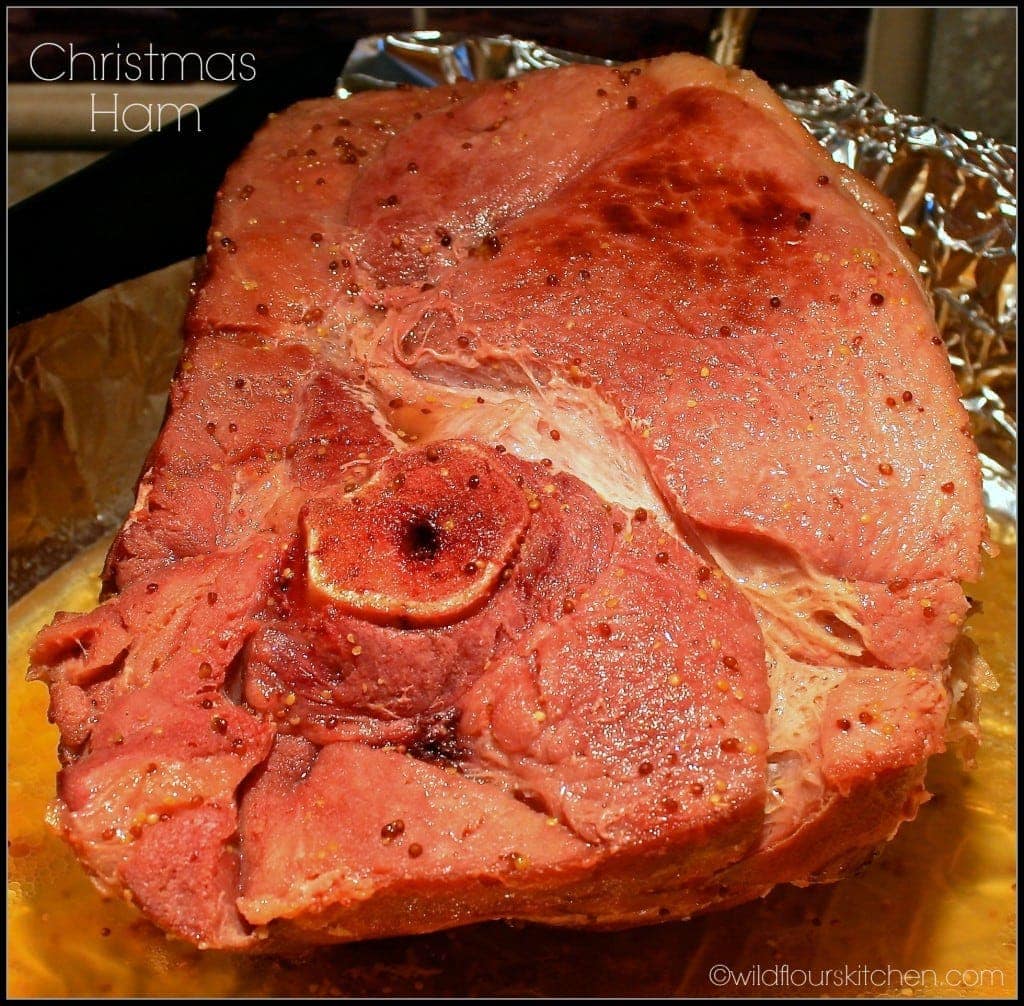 First, my apologies for the one photo that I was able to get! I took it on the stovetop, at night, and it’s all I have. I must’ve given up knowing that it was just too dark to get anything decent, and probably had 5 other things that needed tending to at the time on top of it.

Soooooo, this is it. Utter fail, but at least you can get a general idea until I can make it again and get a better shot for you! 😉

Unlike what I normally make, (a sweet, thick sauce with lots of brown sugar and mustard, etc.), I decided that I wanted just a very light, but flavorful, glaze, (or wash if you will), so that I could use the leftovers in soup without it mucking up the broth. I’m so glad that I did it this way!

This also worked extremely well for thinly slicing for sandwiches as well without smearing up the entire slicer! That can be so messy!!

So for this holiday, I simply mixed warmed honey and butter with a little orange juice and mustard and it was just delightful! 😀

Light and refreshing, and not in the least overpowering to mask the natural salty flavor of the ham with just a touch of added sweetness. 😀

Since it’s so light, you can easily use the leftovers for just about anything with no worries of it tasting “funny” in a salad, soup, sandwich or casserole no matter what you’re adding to it.  Plus, I just liked that it was such a nice change from a heavier sauce.

One tip for you, if you can find one in your area, (as they are getting harder and harder to find!), try and get a whole bone-in ham that’s not spiral cut! There’s a HUGE difference in tenderness, and spiral-cut hams start to dry out as soon as they are sliced before you even get it home. You won’t believe how juicy whole hams are in comparison!

Plus, you can dice the leftovers if you’d like, which you can’t really do when it’s pre-sliced. Oh, you can dice it, but they’re thin little dried out pieces by that time. I honestly do not understand why most companies are pre-slicing them, as it’s so easy to slice a ham that we don’t need to be paying extra for someone else to do it for us! You get to decide how thick or thin you want your slices, and it stays so moist! Ooookay. Off my soapbox now….

Anyways, I hope that your holidays were everything you dreamed, and wish you all the best in the upcoming year! Hello, 2015!! 😀

Until next time, ~Kelly