My hubby’s favorite chocolate cake. I didn’t know who it was that first thought of combining a chocolate cake with coconut-pecan frosting, but it sure was a good idea, wasn’t it? 😉

Some things pair so well that you’d think that they grew up together! Like kids on the same block! Maybe that’s how it happened? I’ll trade you some chocolate for some of that coconut? 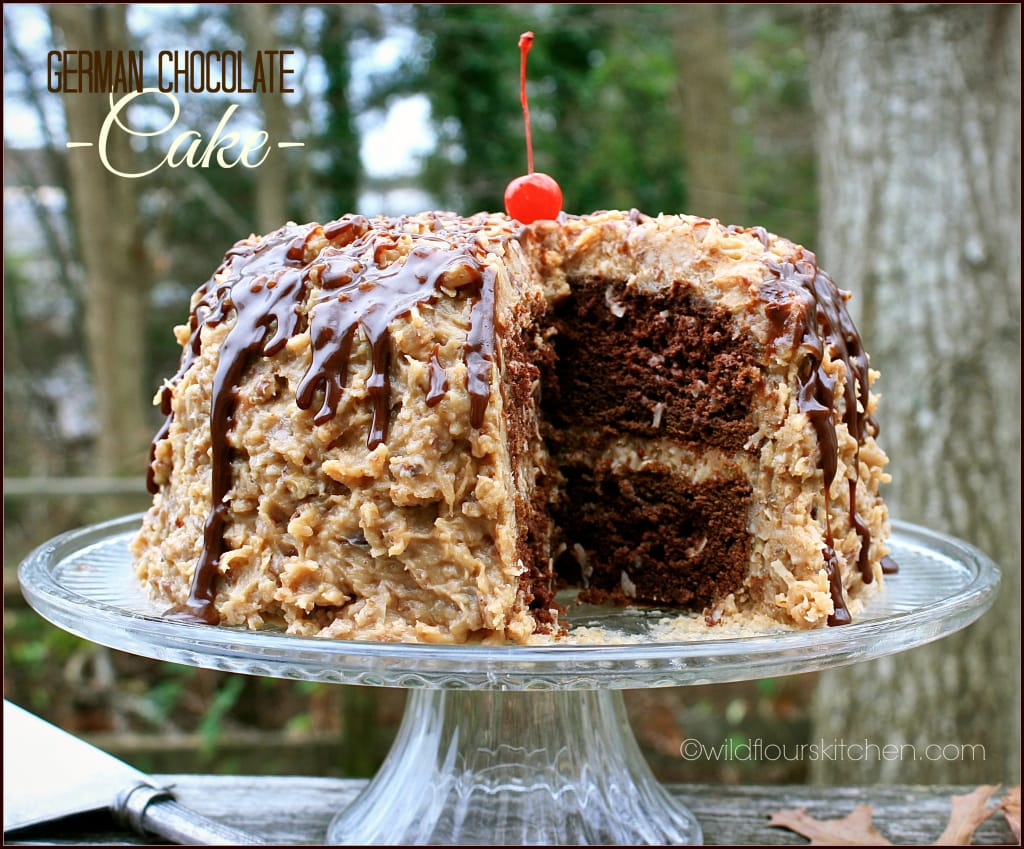 Well, I decided to do a little research, because I love the history of food and just had to find out how this wonderful cake was first created and by whom! I was quite surprised to find out the facts, as this cake didn’t actually originate in Germany. Nope.

It actually originated in Texas by a housewife!  You see, the first part, “German” is actually the last name of Sam, the man who created the mild, dark baking chocolate for the Baker’s Chocolate Company back in 1852.

Then in comes the second part. In 1957, a Texas homemaker named Mrs. George Clay came up with a cake recipe for Baker’s German’s Chocolate and it was published in her hometown Dallas newspaper.

Cool story, huh?! 😀 Soooooo, maybe I might not be that far off after all! 😉 But I sure would like to thank her! It’s one of the most popular cakes out there and doubt that it’s adoration will ever fade.

So anyways, my hubby came home from the store with another boxed cake mix. *sigh* I really don’t very much care for them.

They bake up full of air with almost no flavor. So I really doctored it up, and it came out pretty darned good actually.

Homemade is still always better, hands down, but if you find yourself in the same situation, this might just surprise you and lend a hand to making that mix taste a whole lot better! 😉

I switched out all of the flavorless ingredients for “real” ingredients such as butter, milk and an extra egg yolk for richness.

And I also gave it a bit of a flavor boost by adding some espresso powder, cocoa powder, chocolate fudge pudding mix and a little vanilla extract.

As for the frosting, he knows I’d about shoot him if he came home with one of those plastic tubs of goo. I make a wonderful homemade coconut-pecan frosting, so at least the frosting was homemade from scratch. 😉

Once the cake was done and frosted, it looked like it was going to leave the house half-dressed! So I had originally thought to decorate it a bit with some pecans, but I was out.

So I made up a small batch of ganache and that worked so well that I may just do it this way for awhile. 😀 😉 But you can decorate your cake how ever you’d like.

You can also cut the frosting recipe in half and only frost the top and between layers if preferring the more traditional look.

Or you can make the full batch, and do three layers dividing the batter into three pans, or make four layers by slicing two layers in half horizontally.

I was in a bit of a hurry and should’ve done that. Forgive me, but it was still really good. 😉

So here’s to Mrs. Clay, the genius behind this classic cake that combines the match-made-in-heaven flavors of chocolate, coconut and pecans! Huzzah Mrs. Clay! Well done!

And I promise to sometime share my homemade version that doesn’t use a boxed mix. 😉 But for now, this one ain’t too shabby! 😉

Have a wonderful weekend all, and I’ll see you all next week! 😀 Take care! ~Kelly

Your receive is perfect, baked this cake for a friend, so excited for him to try it!!! I cheated I've already had a piece and it is delicious. Thank you

Just made both per your instructions ,wonderful the icing was to die for. Thanks for sharing

cannot wait to make this!! sounds so delish!

I have tried the recipe twice, and it starts to curdle after about 5 minutes cooking it on medium, stirring constantly. I can't figure out what I'm doing wrong!