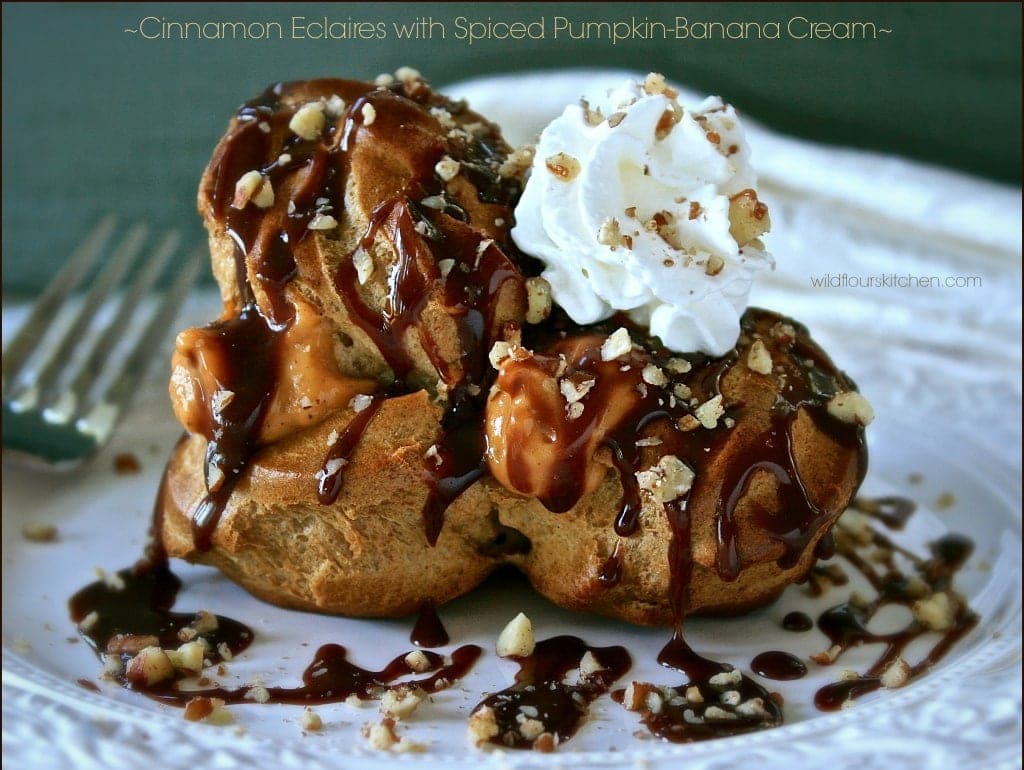 Ever since I came up with a novel idea of adding different flours and flavors to choux pastry back in the early ’90’s, and won in two magazines (Better Homes & Gardens and Taste of Home) for my “Rye Party Puffs”, I have had a ton of fun playing and experimenting with this simple, basic, timeless and classic dough!

My recipe won in two magazines and I received a massive amount of phone calls from all over the country including three chefs! Two from Chicago and one from New Orleans! Believe me, I was walking on AIR for WEEKS!!! I was broke, and working two jobs, one of which was a cashier at Kmart just trying to pay my bills!!! So it meant the WORLD to me!!

I NEVER EVER brag. I hate it when people do that. So please don’t take any of this the wrong way. I had an AWFUL experience with another blogger that has me on the defense. Which is another thing I normally just ignore. But when it was something that won awards, and had chefs calling my house, believe me, I had to stand up for myself on this one. 😉

(*NOT bragging, but posting this as proof. 😉 Long story, but “someone” has been posting all over the internet that they came up with MY recipe….copying and pasting my exact ingredients and directions word for word. 😉 ) *The certificate from BH&G magazine has my ex’s last name on it. (Why I don’t have most of my certificates and plaques hanging on a discreet wall in my home anymore, LOL!) 😉 But I still have every one of them as a small reminder of my life’s little achievements. 😉 Liars and thieves are my pet peeves. 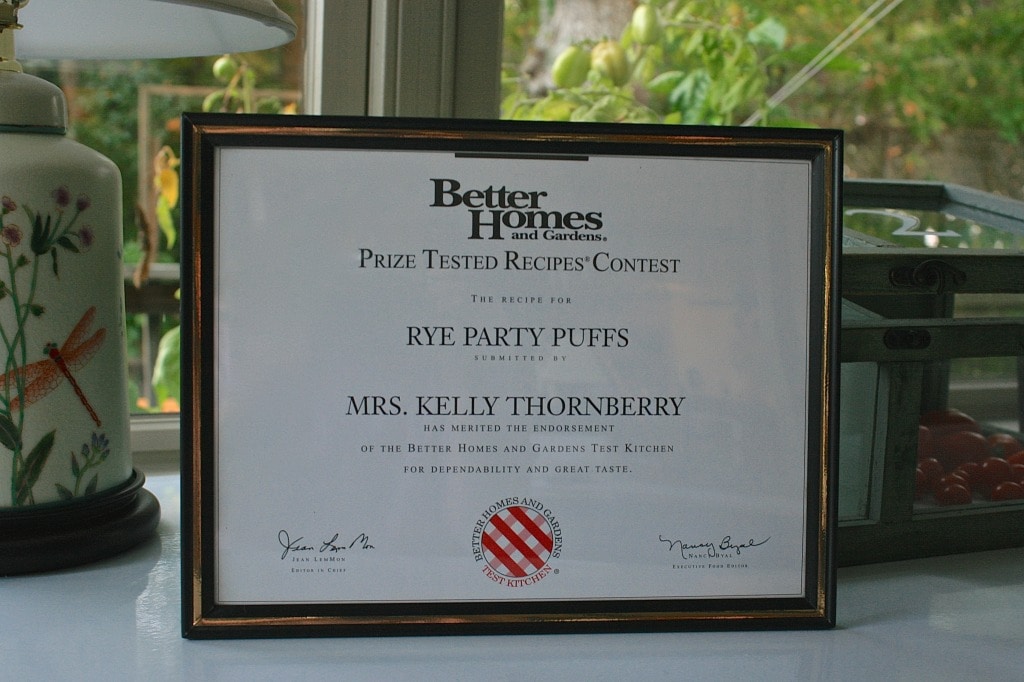 And today I’m just as proud to share another one that I have come up with! I wanted to make something simple, with few ingredients, that still had that wow-factor that was company-worthy, yet easy on the pocketbook. A beautiful dessert to surprise my hubby!

I have no idea why, but I’ve been hoarding 4 cans of pumpkin plus half a dozen boxes of assorted puddings! (What sale prompted this, I have no idea.) So my main goal was to put at least some of these pantry items to good use! My hubby had mentioned that he loves eclairs, so I put my thinking cap on and decided to come up with another unique twist on this underrated, passed by, “mystery pastry” and have a little fun with it again!

“Choux pastry” really is no mystery, and so many people that I have taught always said that they were afraid to try it! I swear to you, it really is not hard to make at all, and uses the most basic of basic ingredients! (*Which was why I thought to kick it up a notch all those years ago!) 😉 I’m notorious for never making a recipe “according to the book”! 😉

*But you do have to be careful. I always say to people who have wrecked something that they were baking, that…

…”Cooking is an experiment, but baking is a science. Baking is based on a formula. And if you stray too far from the formula, you are sure to fail”.

So take care when when experimenting with this that you don’t disturb the balance of ingredients that it takes to make these turn out properly. I have always stuck to herbs, spices, flavored powders such as garlic and onion, and exchanged half of the flour with others such as rye, wheat and masa harina. Once you’ve made this easy dough once, you’ll be confident and hooked! 😀 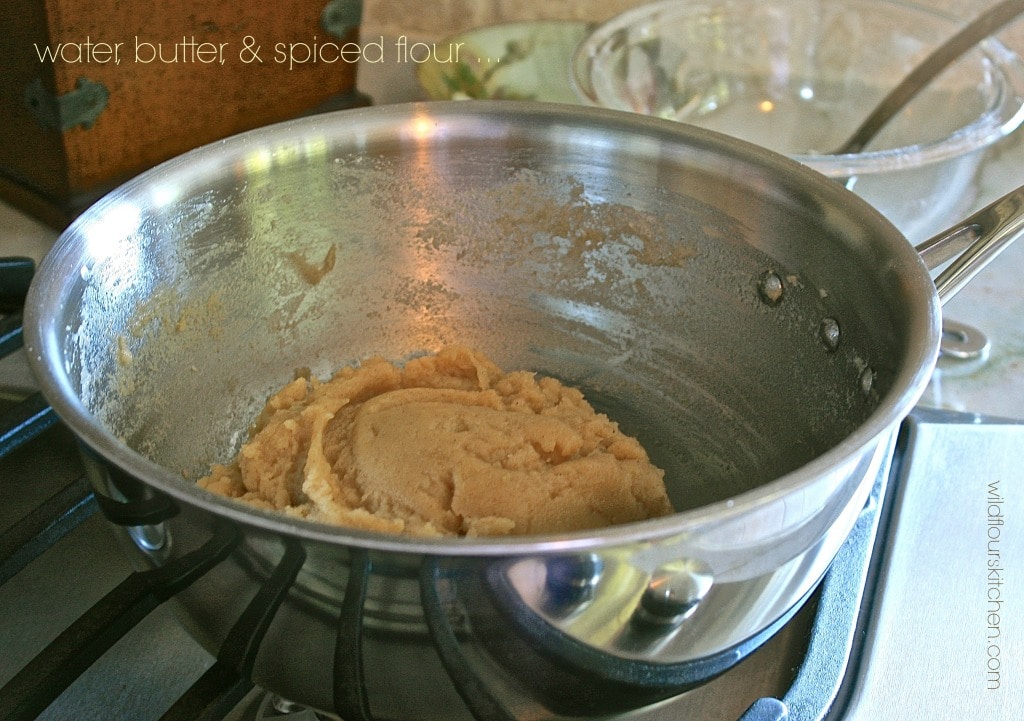 To make choux pastry, in a nutshell, is simply this: put 1 cup water and 1 stick butter in a pan, bring it to a boil, dump in seasoned flour(s) all at once, reduce heat and stir like crazy until the dough forms a ball and leaves the sides of the pan.

You are now most of the way done! EASY, right? 😀  For this batch, I added a nice amount of cinnamon, and it smelled heavenly already! 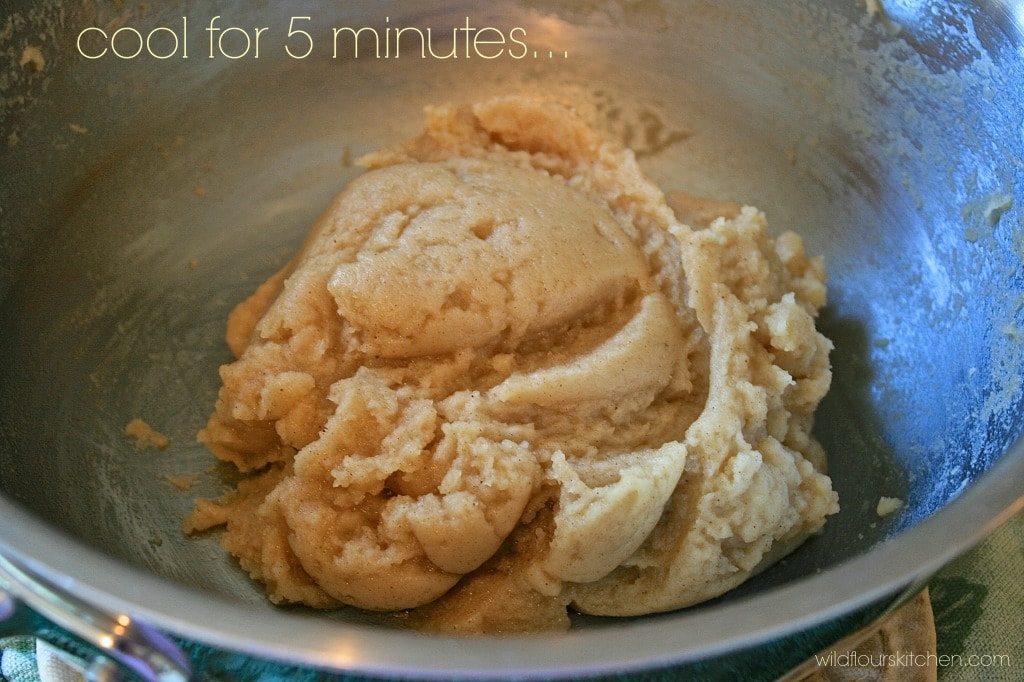 Then just let it rest for 5 minutes, giving it a stir now and then to release some of the heat, and beat in eggs one at a time until the dough is well mixed and glossy! 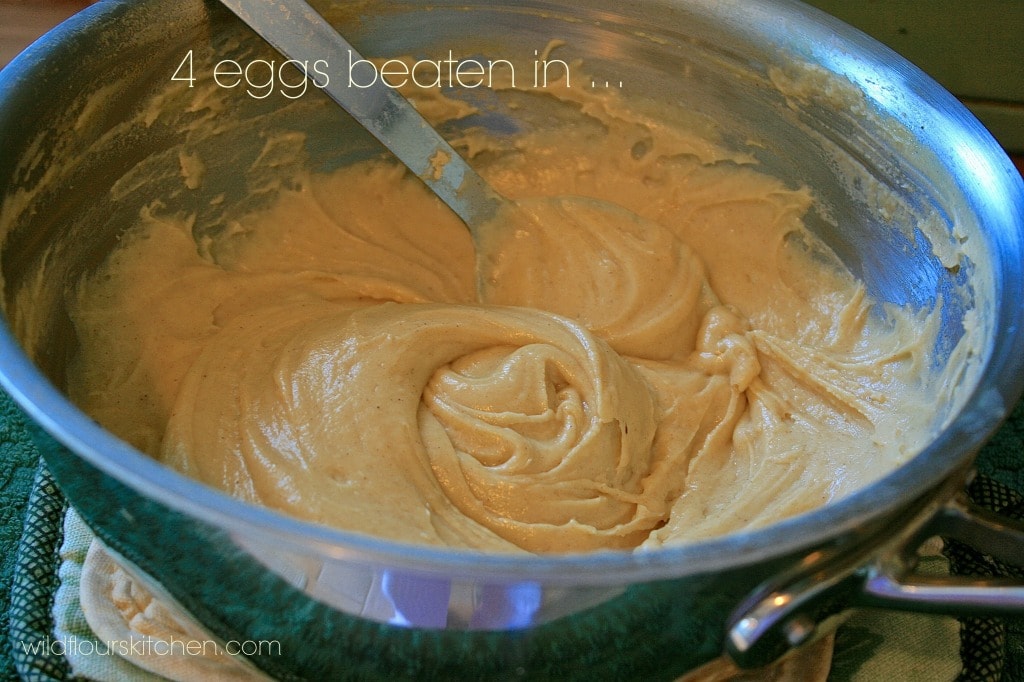 Wah-lah, ta-da, that’s all there is to it!  Then you just simply spoon the dough into a pasty bag, pipe it onto a greased baking sheet and bake!

I don’t know about you, but when I’m at a party and I walk up to a tray of appetizers or desserts, I’d rather see all different shapes and sizes! 😀 Some guests like just a bite, yet some have starved themselves all day for the party! 😉 So make them all uniquely different to please everyone, and add a lot of interest to the plate at the same time! 😉 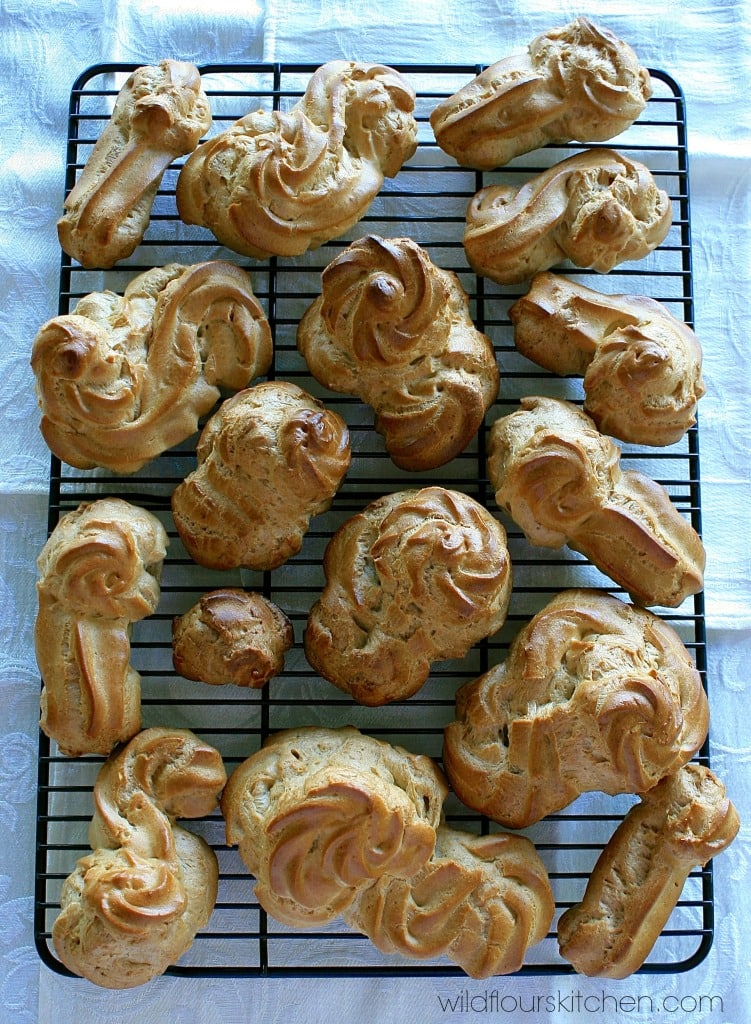 How many you get will of course depend on what size you make them. If you make small round single bite-sized ones, you should yield about 4 1/2 dozen. If you make them much larger, such as these, you will get drastically less of course. It just depends on whether you want to make a full-sized dessert or just a nibble, and how many guests you are planning on serving. 😀 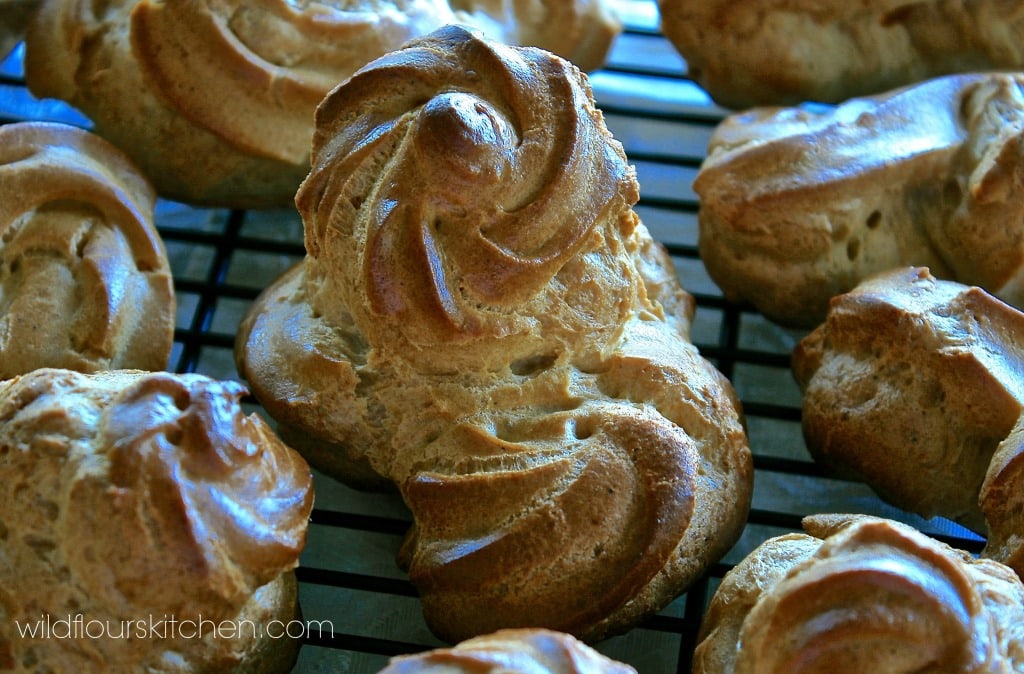 Obviously, since it is just myself and my husband, I was not making 50-55 of these! I was making a nice full-sized dessert, a plate of 2 per person-sized. 🙂 I used my big mega M1 fluted tip to pipe the dough and left plenty of room between each for expansion as these will DOUBLE in size when baked. 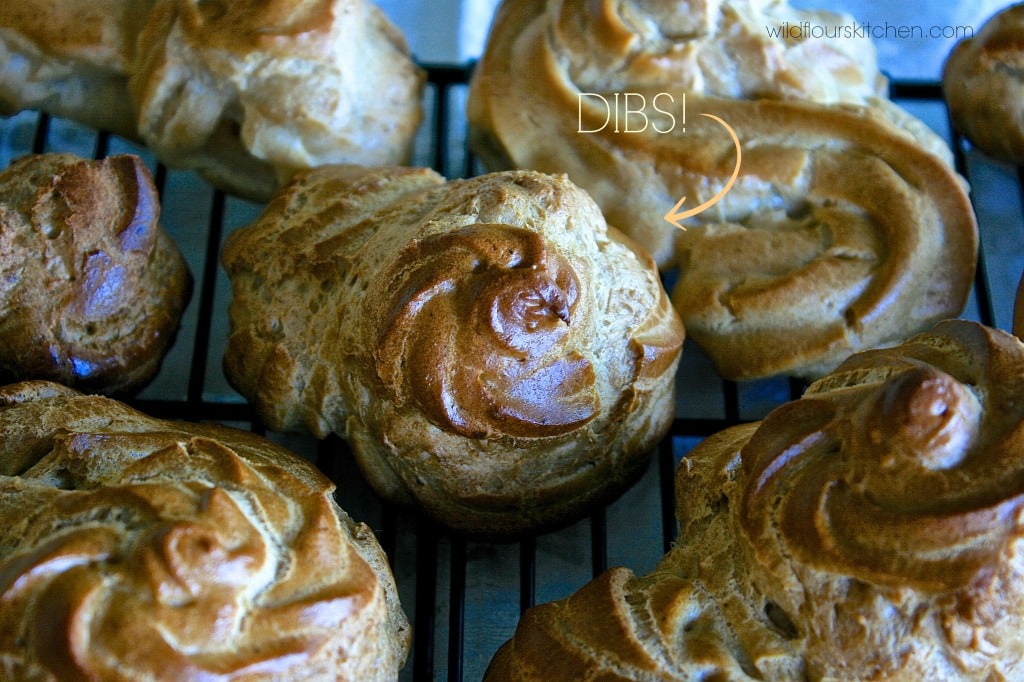 They really do turn out pretty, don’t they?  😀 And I spied a medium-sized one just the right size for me! 😉 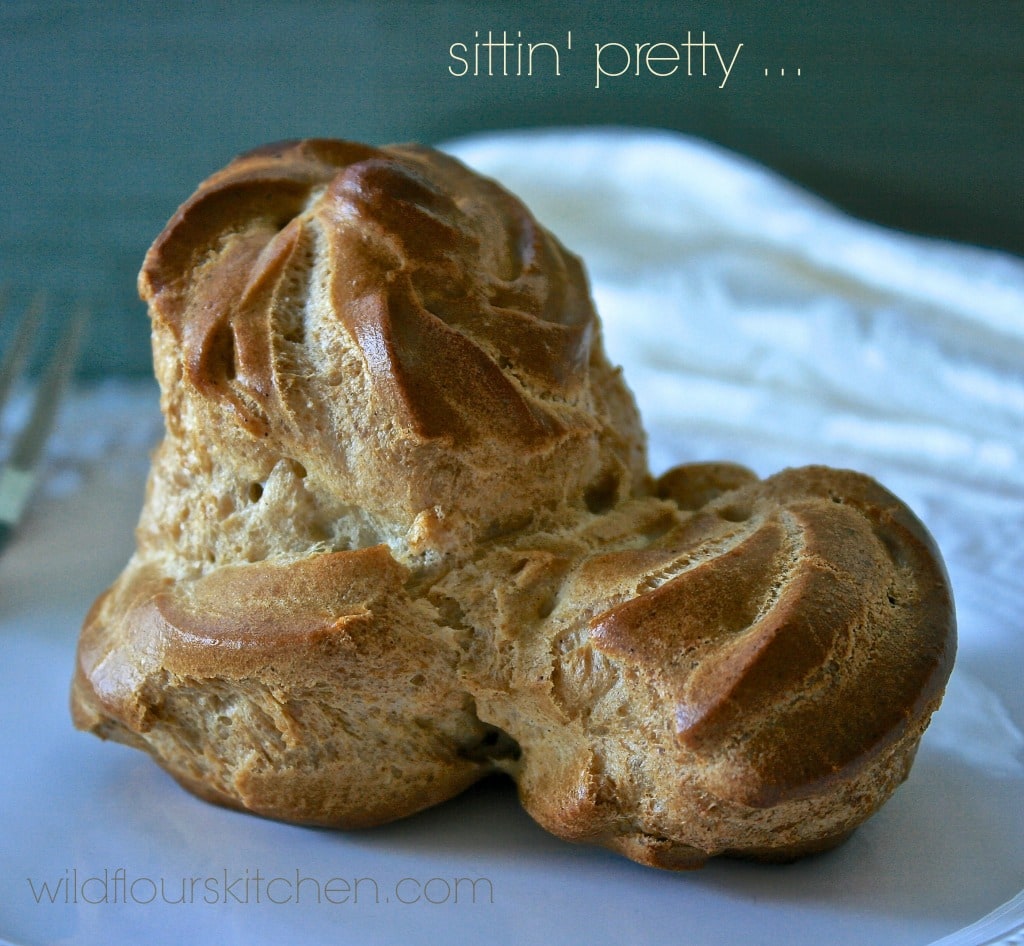 My hubby on the other hand, bless his heart, in typical guy fashion chose the biggest one of the bunch! 😀 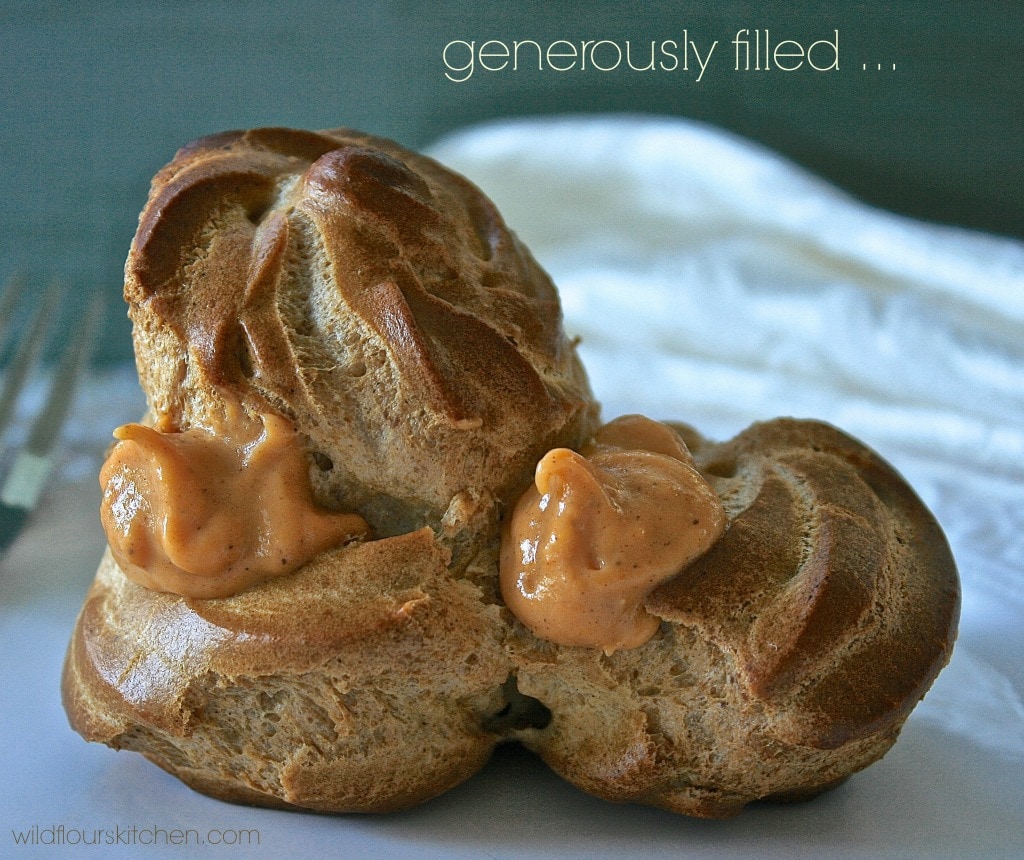 I put some of that pumpkin and a box of instant banana pudding to good use and started with that for the filling! I spiced it up nicely and it was DIVINE. I and I hate those instant puddings. (I think it was bought to add to a cake that never got made.) But the added pumpkin and spices really made for quite a dreamy autumn treat! 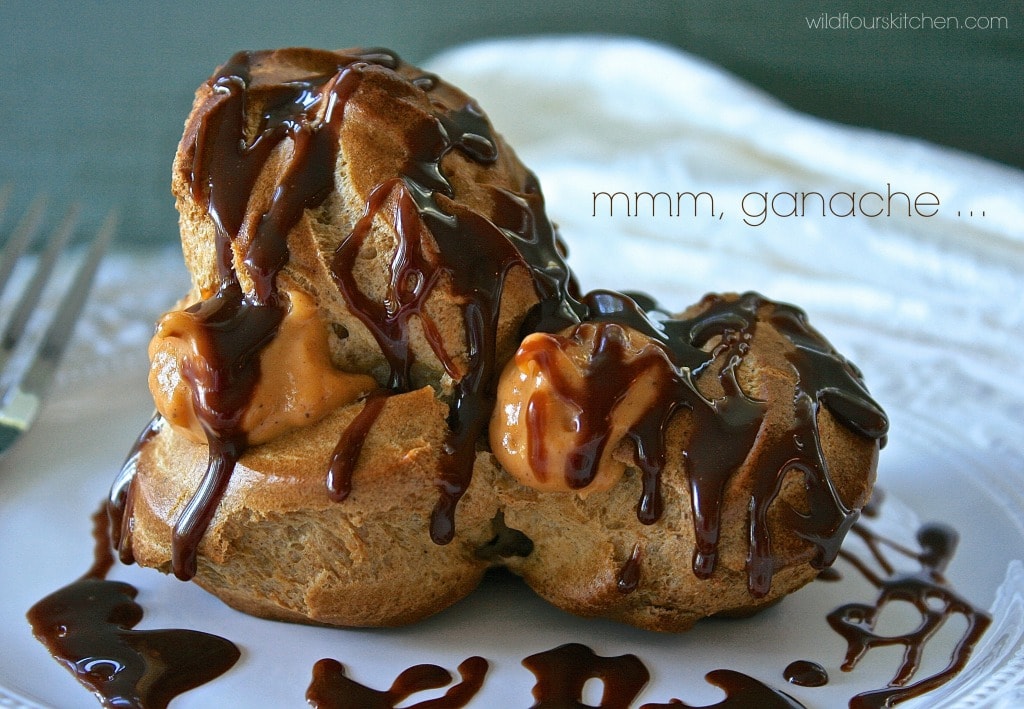 I didn’t stop there, though, and I’m glad that I didn’t. I thought at first to dust them with powdered sugar, but I had some nice quality chocolate chips and some heavy cream on hand, and thought that a drizzle of ganache would be much nicer and add another depth of flavor. 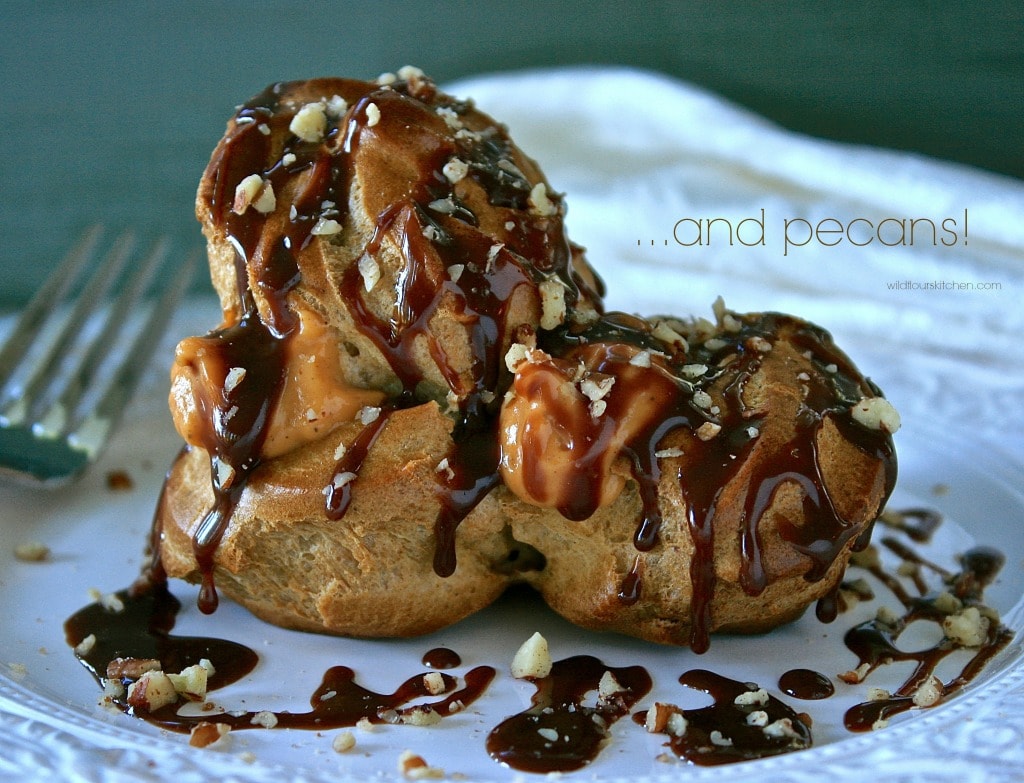 While digging in my goody basket for the chocolate chips, I came across a small bag of leftover finely chopped pecans! THIS was going to be the spectacular dessert that I had wanted it to be. 🙂

Can’t forget the tiara! 😉 And on went a pretty swirl of whipped cream! 😀 SPECTACULAR! (If I dare do say so myself! 😉 )

And the flavor? SINFUL. Absolutely SINFUL! 😀

Keep this one in mind for the upcoming holidays to knock the socks off your guests! These are sure to put smiles on everyone’s faces for your next Halloween Party or Thanksgiving Day dessert! The shells can even be made ahead of time and frozen. (Thaw on the counter and re-crisp in the oven. Let cool, then fill.) I do hope you try them! They really are fun to make and EASY, though they don’t look like it! (Your guests will think you got them at a bakery.) 😉

I hope you try these soon and just have fun with this! They don’t have to be perfect. To me, too perfect looks manufactured anyways, right? 😉

That’s all for this week friends! I hope that you enjoy this one and pick out something to make over the weekend! 😀 Love to all! <3 ~Kelly