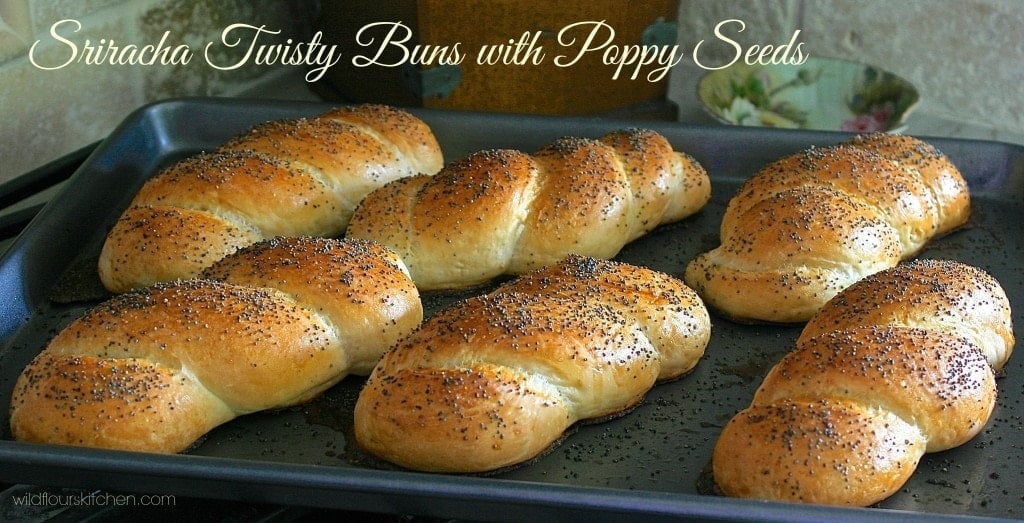 My hubby put it perfectly, “Tongue tingling!” And that’s exactly what these fresh, warm, sriracha poppy seed buns do!  They leave your tongue tingling! 😀

Whether we like it or not, fall is upon us. I think football was created just for that reason of feeling sad that summer is about over. Something fun to pick the spirits right back up! 😀

Even if you don’t like to watch football, if you enjoy cooking, attending or having football parties always makes it fun! I love to be with a group of friends just enjoying the day and having a blast watching the games and rooting for my Chicago Bears!

Not speaking for all women of course, or even all guys for that matter, but I happen to LOVE football! 😀 Though I clean up nice, I’m a tomboy at heart! 😉 😀 I’ll even catch a few games that aren’t the teams that I like and watch them anyways, along with a few ice cold beers, just to watch the game being played anyway! 😉 😀

So since the NFL Football season has now officially started, I was excited to create some good old-fashioned, no-fuss no-muss Game Day Grub! 😀

I hadn’t had a simple hotdog all summer long, seriously! I know, right?? I can’t believe it myself! Not one. Single. Hotdog. So that was just going to be first on my list of fun football foods to get the season started! Who doesn’t love a hotdog while watching a football game, right? 😀

But let’s face it, the buns at the store are simply pathetic. Little pillows of air that fall apart as soon as you put anything good on them! So I like to make them “semi-homemade” when making a lot of food, to at least have something that will hold up and not get sacked in the first quarter! 😉

I love to use frozen bread dough loaves, as anyone who has been following my blog knows already! The dough is simple to use and super fun to play with! I’ve been making “homemade” hotdog buns with this stuff for years. But this time, I wanted to kick them up a tad. 😉 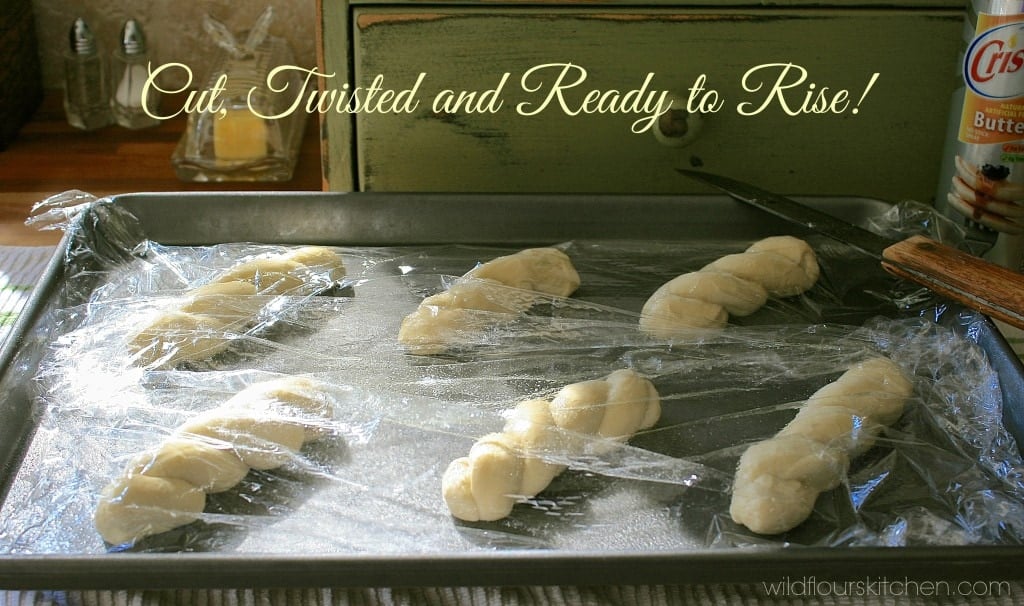 I wanted them to be extra fun, so I decided to roll the dough into ropes and make the buns twisty!

I popped them into the oven to rise with the the light on for warmth, and hoped that they wouldn’t un-twist! 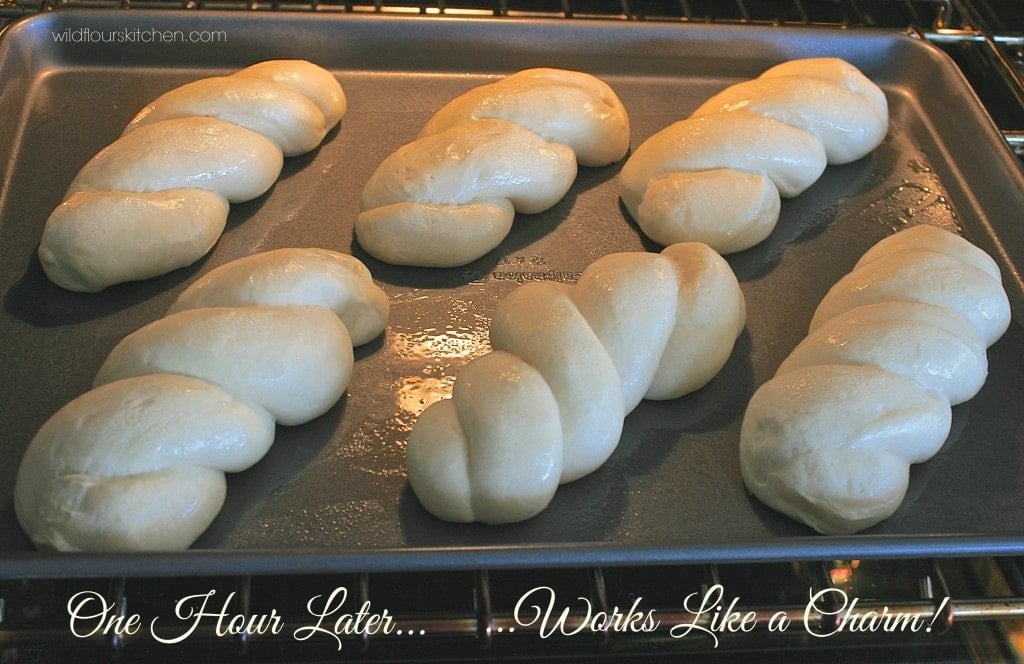 They rose beautifully, stayed intact, and jut look how high they are after only just one hour!

I came up with the idea, just as I was about to brush them with egg wash, that why can’t we add flavor to the egg wash?? What would happen if we did?? Would they not be glossy and crispy on the outside anymore?? So I decided to just go for it see what would happen!

So I whisked in some sriracha sauce with the beaten egg instead of water and brushed them until they were well coated.  I love a little saltiness on the outside, so a nice sprinkling of Johnny’s Seasoning Salt was next, then followed by some poppy seeds for extra fun! 😀 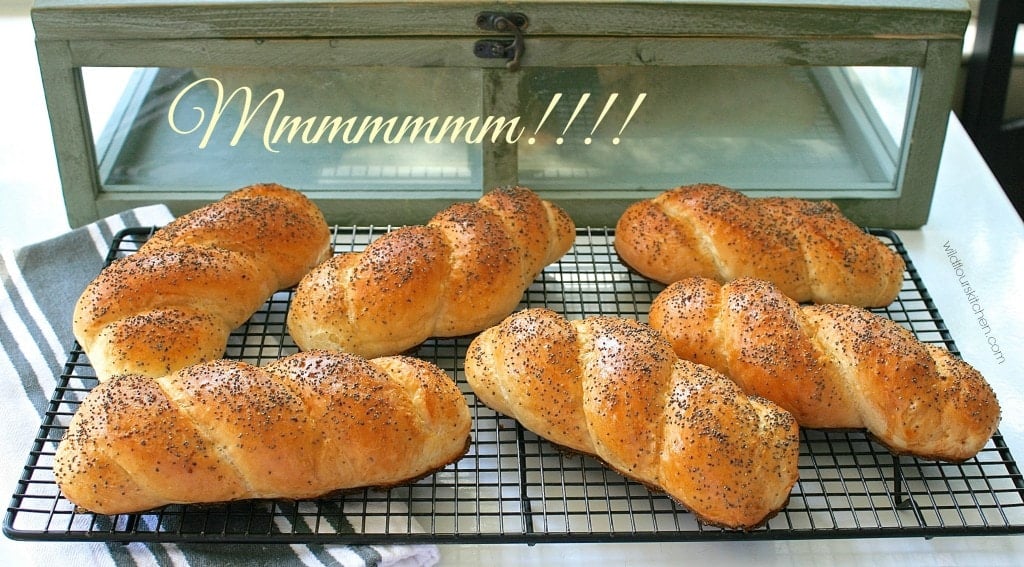 Not only did they come out gorgeous, but you could actually taste the sriracha! You could even add more if you like! 😉 Next time I might add a full Tablespoon! 😉 Our tongues were tingling and they went perfectly with what I made for them!

You can even make smaller ones, or slice the buns into thirds for cocktail wiener sliders! These also hold up extremely well for any kind of sub, bratwurst, hoagie, barbecue, Italian Beefs or Philly Cheesesteaks, too!

What will you fill these with? Stay tuned to see what easy kicked up Game Day Grub we enjoyed with these! Take care all, and I hope you give these easy “hot buns” a try soon for your next bash! 😀 See you all tomorrow! 😉 ~Kelly