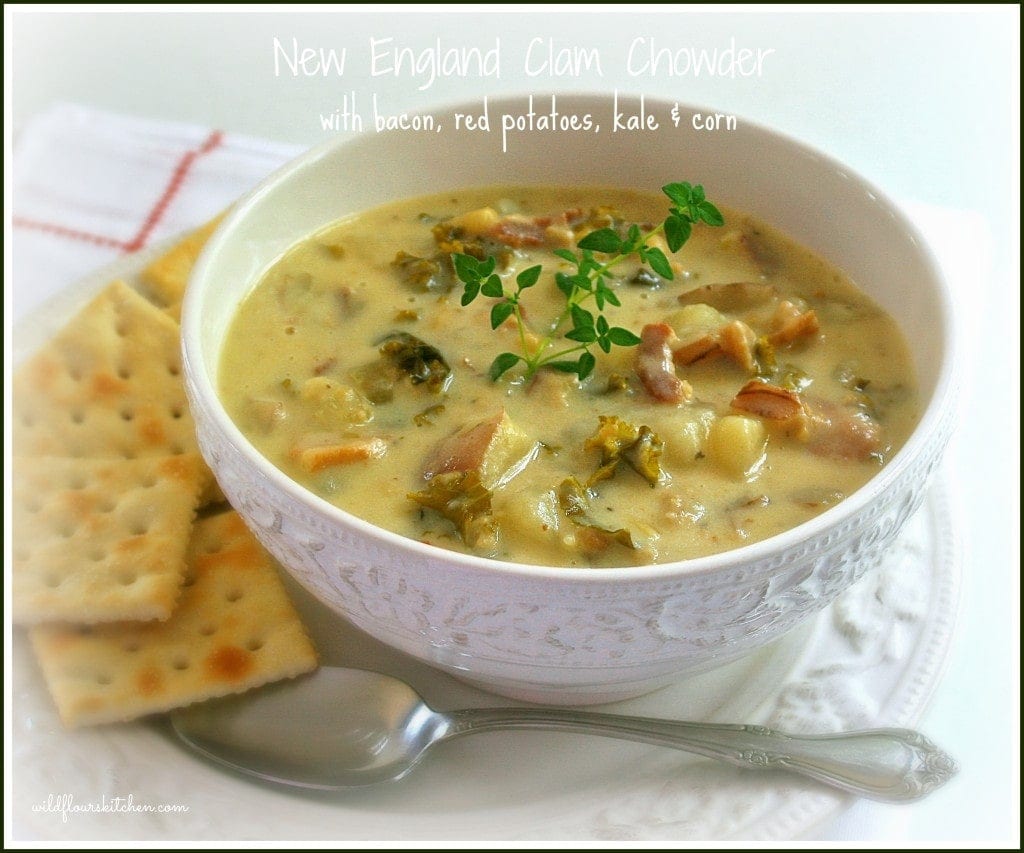 Mmmmmm!  Can you smell it, too? 😀 Some foods, no matter the weather, can be enjoyed all year long! When I was a little kid, I never thought I’d be saying something like that! I remember one scorchingly hot summer, we were at my Grandma’s, and when we were called in for lunch, I was very surprised and not too happy to see piping hot bowls of homemade vegetable soup on the table! My jaw dropped and I looked back up in horror and said, “Soup?? On a hot day??”

My Grandma laughed and laughed! And I never lived that down! Haha!! Now, I can eat soup all year long, too. (And I’m sure I ended up enjoying hers that day, too. 😉 )

There’s nothing more comforting and soothing than pots of soups, stews, chowders and chili! And they’re always a great way to use up all those bits of “this and that”, stray veggies on their last leg, and cans, bags and boxes of odd items that otherwise would continue to collect dust and take up space in the cupboard!

I love playing with soups and chowders, and decided to toss together one of my favorites! I had 2 cans of clams that were begging to be used, some nice potatoes, a cup or so of leftover corn, and some kale that was still good, but just starting to wilt and weep. I even had a shallot to toss in due to my last onion being the runt of the bag!

And before anyone gets upset, remember, sailors who created clam and fisherman’s chowders did the same thing. 😉 They used what they had onboard, the day’s catch, and added the scraps of leftovers and any and all veggies from the galley, the ship’s kitchen!

This chowder has since changed, and now more milk and creams are added and less vegetables. Usually only potatoes and onions now. But I didn’t want my veggies to go bad, and I think any good sailor would agree. 😉

Large pots of soups, stews and chowders like this were always made for sheer sustenance and necessity and fed to fellow shipmates, and of course their families. So adding in a little corn and kale shouldn’t have me walking the plank! 😉

My hubby, who’s a former Navy man himself, said it was the best clam chowder he’s ever had! Believe me when I say, I was relieved to hear that! “Mr. Picky Pants” earned that nickname for a reason, but I wouldn’t have it any other way! People who constantly demand to be showered with compliments rarely hear the truth. I’d rather know if something is actually good or not. 😉

The only “mistake” he said I made, was that I didn’t make enough. No better compliment than that!! 😀 But he can be a li’l bit greedy, too. So for just two people, I honestly think that this makes plenty. But if you’re feeding more than two, you might want to make this recipe times 1 1/2 or even double it for a large family. Trust me on this, none will go to waste! That’s for sure!

So I hope this chowder finds it way to your table soon! Honestly, it really is that good! And even better the next day, as most pots made with love and care always are. 😉 Have a beautiful day all, and a safe and happy 4th of July! 😀

I really love the ingredients you used. The fact you used what you had is great, and yes I think the fisherman would agree and did it many times as you stated. I also love that nickname...LOL...Mr.Picky Pants...Hilarious!

I am allergic to shellfish...all shellfish. This looks like a great recipe - would 10 ounces of skinless/boneless chicken be a good substitute for the clams ?

Sorry to hear that, Mark! I'm allergic to just the crustaceans so I understand! Chicken would be a perfectly wonderful substitute. :)