I am so excited to share this recipe with you! Years ago, I had made Rachael Ray’s version of these, and though I really enjoyed them, my husband didn’t.

He never had the heart to tell me, so I recently found out, when I said that I was going to make them again.

I had a feeling something was wrong, because his smile wasn’t the same and there was no “happy man dance” to follow when dinner plans were announced.

I always liked Rachael’s recipe for these and thought they were super fun, but I also on the same hand, thought that there was something missing and parts of the recipe really needed some work.

So, I decided to take her recipe, rework it, revamp it, and add a lot more flavors and interest. Hers are WAY too sweet, so that was something that was going to change right off the bat.

My hubby has never been a lover of anything hot. Hot sauces, spices, peppers, even hot wings! I know! But fairly recently, I finally introduced him to sriracha chili sauce, and he has become a Red Rooster junkie ever since!

I am SO GLAD, because I LOVE anything hot! So sriracha sauce joined the party! BOTH parties, actually! 😉

You see, there are 2 main parts to this. One being the patties, and the second being my Asian slaw mix! But first the patties! Since there’s a fair amount of a slaw being added later, I didn’t want quite so much cabbage mix added to the patties. I wanted them meatier and the mix chopped so that the patties would stay nicer and you’re not pulling out large pieces with your teeth when you go to eat them.

Not a pretty sight. Especially if you’re making them for company!

I also wanted a little heat to balance out the sweet better, so not only did I add sriracha , but I also peppered the outside of the patties with white pepper, which is traditionally used in Moo Shu dishes.

I also upped the garlic! I mean, if you don’t have “breath” after a meal, you didn’t really eat! Right? 😉 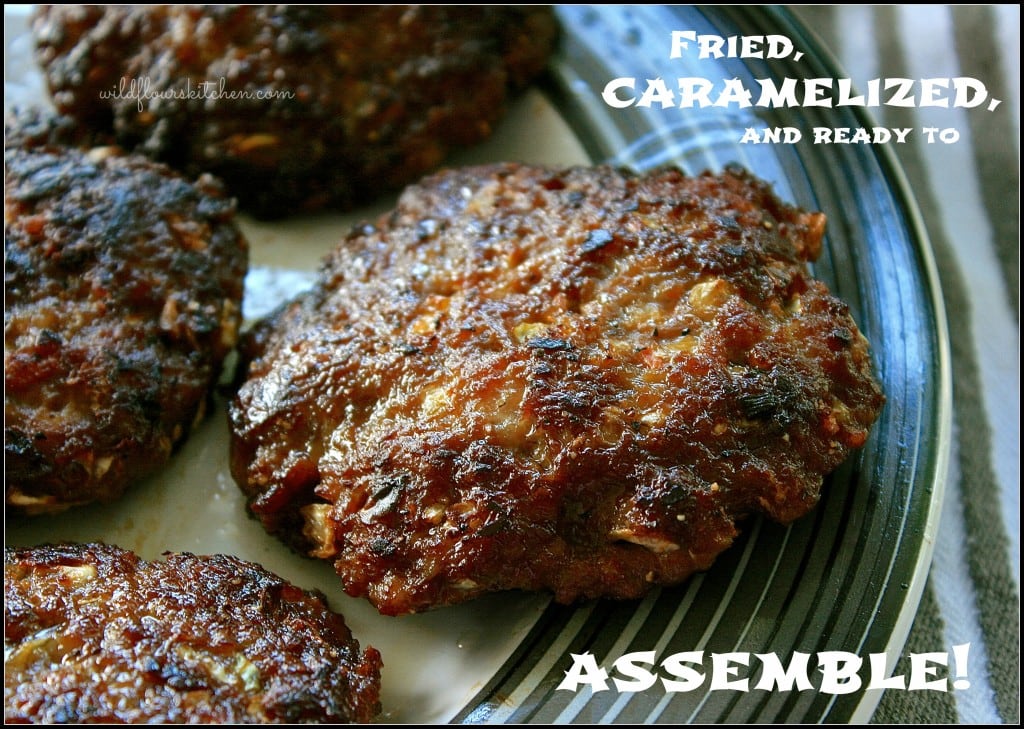 So, not a whole lot of changes to the first part as it may appear, but the flavor was MUCH better already!

But the REAL magic starts happening with part two. The slaw. Rachael’s recipe simply has you pile raw cabbage mix and bean sprouts under the patty and on a pool of hoisin without any seasonings or dressings at all whatsoever added to the cabbage first.

And that part was the part that we both personally felt was lacking and desperately in need of a shiny new makeover! The cabbage was dry and hard. VERY hard, and just not very pleasant to eat at all.

Sometimes when I made these, I would even use less cabbage mix and add some shredded lettuce to it just to try and make it easier to eat. Not to mention digest. Raw cabbage isn’t very good to my system and would give us both a tummy ache!

I never did ever add bean sprouts as it always seemed like a bit of a waste of money as they’re expensive and wasn’t going to add any more flavor anyways. And my hubby won’t touch them, sooooo that was just something I’ve always chosen to leave out altogether.

And by pooling the hoisin, it made it too sweet and the pockets would not hold together at all. So I really went to work on this part!

I decided to turn the cabbage mix into an Asian-style slaw if you will. It seasoned and moistened the cabbage VERY nicely, and I even added some hard-scrambled, chopped egg to the mix which was also really delicious!! (Think pork fried rice if you think this sounds odd.) 😉

I could’ve easily eaten the slaw as a side dish!

Add some grilled chicken, pork or shrimp, and you have another full meal in itself! But the egg adds extra protein, flavor and is also traditional in Moo Shu dishes.

So the final results of this dish totally ROCKED !! I mean, REALLY rocked!!

My hubby inhaled FOUR HALVES for lunch, then had more for supper!

He would’ve had even MORE if I hadn’t stopped him in trying to save some for the next night’s supper!

His head-to-toe smile returned, and he did his famous “happy man dance” as I was reheating the ones left for the next meal!

He mentioned them over and over again, saying how much they have changed, and that he loves them now!  YAY! Success!

So, though I’m not dissing Rachael Ray’s version, not at all, I’m thankful for it because I never would’ve been able to make these in the first place without her recipe inspiration! And I absolutely adore her to boot!

But we just needed these kicked up and reworked quite a bit to suite our own personal tastes. And THAT I did!!! 😀

I am very happy with how they turned out, and so very pleased that we both can enjoy them now! I bet Rach would love it, too, and probably does the same thing at home! 😉

And the best part of all? This means we’ll be having them a LOT more often! 😉 I hope this becomes a favorite in your house, too! Have a wonderful day all! 😀

Rachael Ray’s original recipe for her “Moo Shu Pork Pockets” . *My recipe is an adaptation of hers.

For the Pork Patties:

For the Asian Slaw:

These are super fun for company and when serving with grilled items because the patties reheat beautifully in the microwave on medium heat for 30 seconds per side or less. So you can make everything ahead of time, then just microwave the patties first, then the tortillas and simply assemble, rewarm and you're done! 🙂

*I would not suggest trying to grill these, though. The patties are too soft and would fall through the grates.

**And about the hoisin sauce, I ONLY use Kikkoman brand because I've had very bad luck with other brands. Hoisin sauce should be very DARK in color, sweet and be very thick. Not red, runny, tomato-y and resembling barbecue sauce.

Mini ones can be made as appetizers for parties. Just make sure the tortillas are large enough.

Where's my nibble...make it a large one...hahaha! These guys are FANTASTIC!!! Thanks for sharing :-) -Nic

I'll make yours extra special! ;) Thanks, Nic!! :D Hope you give them a try! They really are delicious!! :D

Wow now this recipe really caught my attention! I love Asian and asian Inspired recipes! I would definitely make this!!!!

Thanks, Heidy! I do hope you give this a try soon! Not only are they addictively delicious, but so much fun to make! :D

This post made me HUNGRY! This looks so delicious! <3

Thanks, Brandi!! :D I'd share some with you you....but my hubby tore through them like the Tasmanian Devil!

Wow, this recipe sound so delicious. I love all the flavors. Pinned/shared.

Thanks, Joanne!! :D They truly are delicious with such a nice, Asian flavor! Thanks for sharing and the Pin! :D