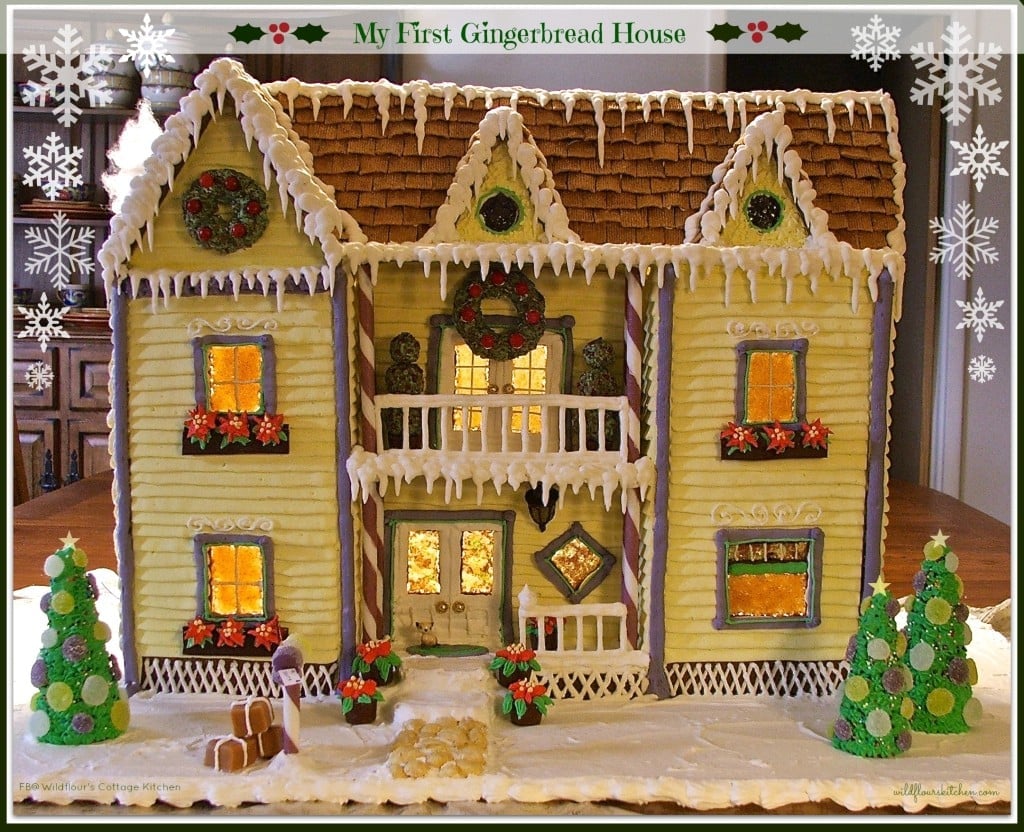 Back in 2006, when we lived in a small town in Indiana, I made my very first Gingerbread House! I entered two contests taking First Place in both!

It turned out to be quite a massive project, and a lot more work and involvement than I ever thought possible! As hard as I thought it might be, I ended up only wishing it had been that easy!

My husband and I completely designed this house ourselves, and when ALL was said and done, it took about 200 hours total! A good 20 hours or so for planning, making a prototype, all of the math and figuring, and around 180 hours to actually make and decorate – – and that’s just the outside!

I didn’t even bother with the inside, my sanity was somehow still intact and I didn’t want to chance it!! 😉

I had made gingerbread cookies most of my life, so that part, I thought, was going to be easy. Well, it wasn’t. Ha!

I don’t even remember how many batches I had to make for the gazillion pieces, but it was a massive amount of dough, that’s for sure!

By the third batch, I cut WAY back on the spices since it wasn’t going to be eaten. (After all of this work, we weren’t EVEN going to eat this!)

But there were enough spices throughout the massive house that it smelled as though the whole thing had come straight out of Mrs. Clause’s kitchen all the way from the North Pole!

So if you’re not planning on actually eating it, and it’s to be a decoration, no need to waste expensive spices for the whole thing. Just add enough to smell nice, but you don’t have to use full amounts.

Gingerbread houses aren’t cheap to make and can get very costly depending on what all you want to decorate it with and how big and extravagant you want to go. 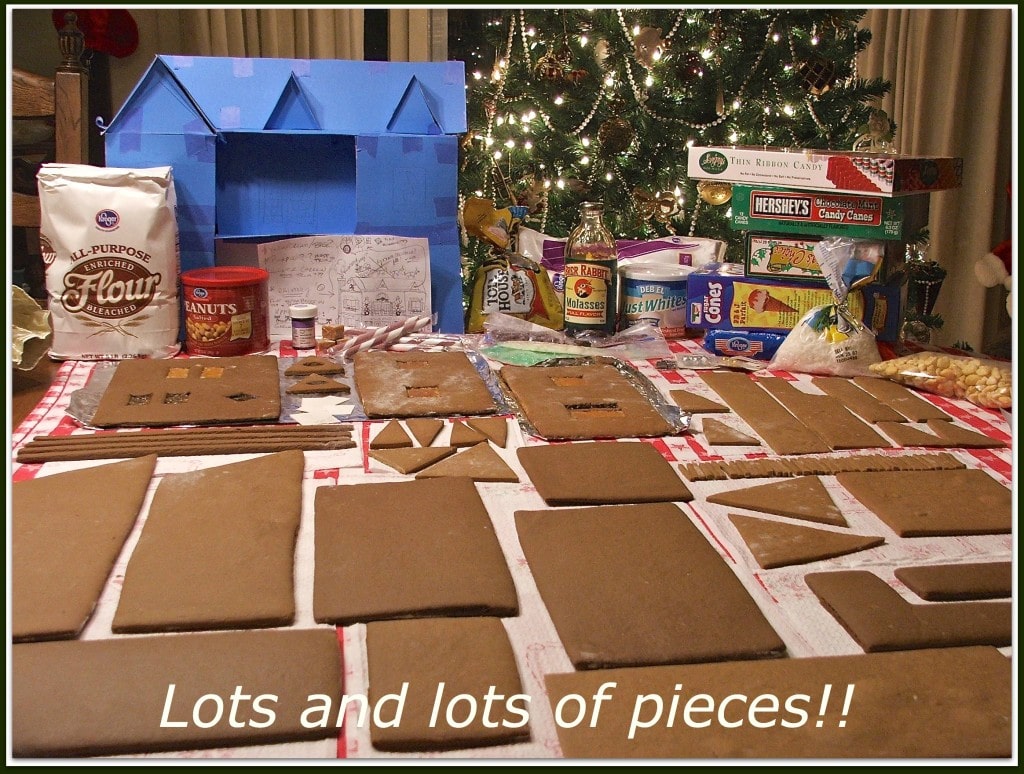 The next daunting and unending task was the “Royal Icing”. I had never made royal icing before…and after making GALLONS of it, I could’ve gone pro!

My first main panic attack came shortly after icing the main house pieces. There was an overhang of icing on all of the edges….how were these pieces going to fit together now?? I thought for sure that all of the work I had already done was now ruined! And there would be NO gingerbread house!

Then, my husband came up with the brilliant idea to literally “sand down” all of the edges with a box-style cheese grater!

It could NOT have worked more perfectly!! Every. Single. Piece could be sanded perfectly to fit snugly!

I do believe I cried! 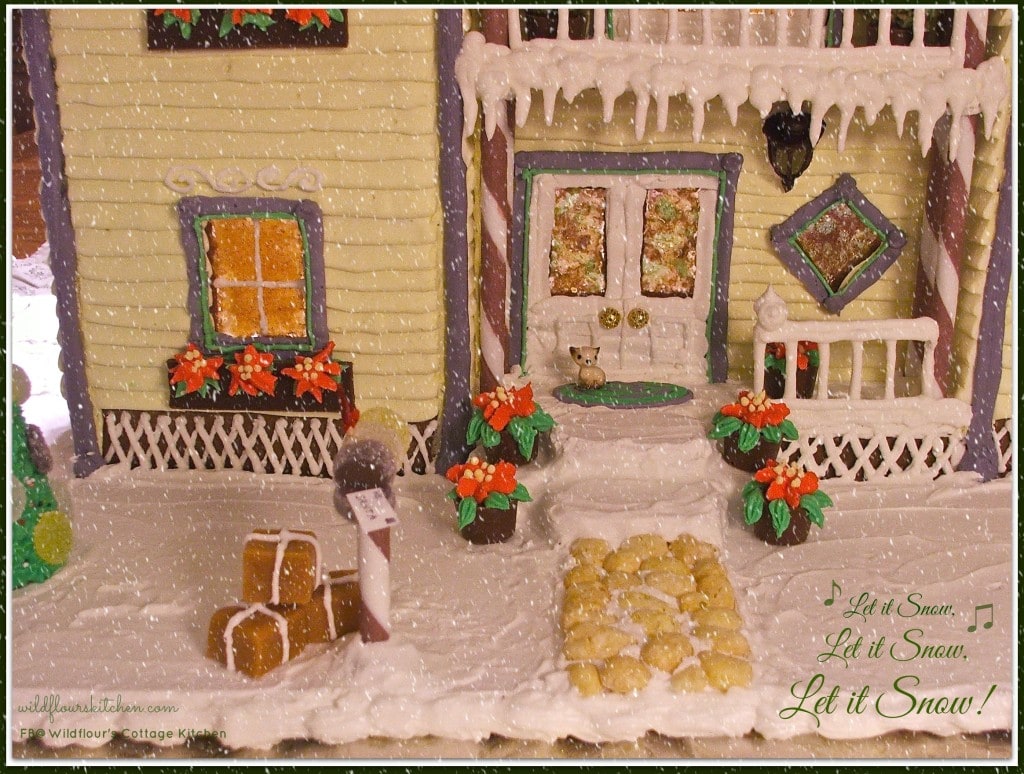 One neat little trick I learned, to save on switching bags and cleaning tips for different colors, is to “double bag”! Set up your clean bag as you normally would securing the tip you’re going to be using for several different colors.

Fill a second bag with your tinted royal icing and drop down into the first one. Pull the end through the tip and snip off end.

Pull second inner bag up just a teeny bit so the tip will not be blocked by the inside bag, twist both open-end tops together and use as you normally would.

By doing it this way, you’re not constantly taking apart and washing the tip and coupling over and over each time you want to switch colors. Make sense? 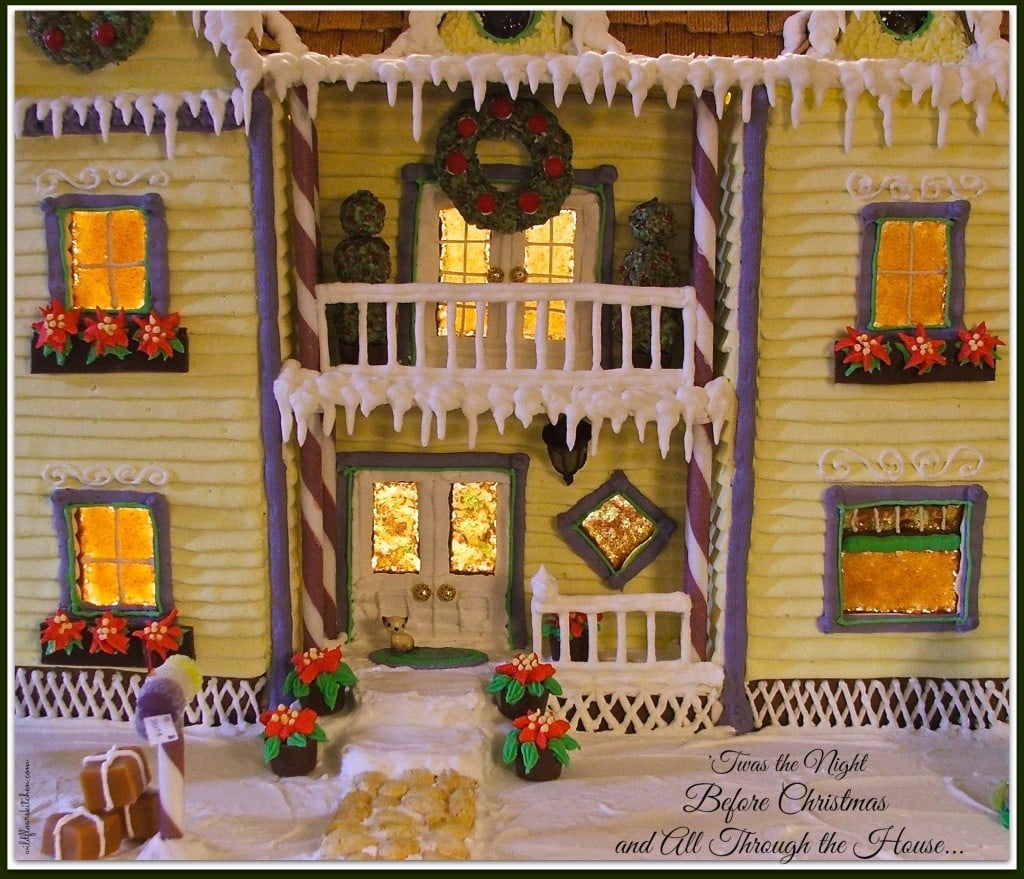 Go through ALL of your baking supplies and search around your kitchen to see what you already have on hand to use, then figure what else you might need or want. This will really save you a pretty penny!

Don’t forget about things like cereals! I made the entire chimney and sidewalk out of stale Sugar Pops cereal that never got eaten and ended up in the back of the pantry, and old Golden Grahams for the roof! I was even able to snip them with scissors in a sawing motion to fit the exact sizes I needed!

Other goodies we used were red hots, Rolos, huckleberry-flavored candy canes, caramels, gum drops, ice cream cones, sprinkles, Jolly Ranchers and Life Savors, melted chocolate chips, and pieces of Hershey bars! (I molded the wreaths and the topiaries on the balcony out of a small batch of rice krispie treats!) I’m sure I’m forgetting  few, but that’s at least most of it!

Other inexpensive items you can use are (generic or store-brand) cereals of all kinds such as Cheerios or Lucky Charms, pretzels, peanuts and assorted nuts, sunflower seeds, poppy seeds, marshmallows, clear or tinted Kayro syrup, fondant, Tootsie Rolls, Dots, chocolate non-pariels, licorice whips, peppermint starlights, or any bagged candies and snack foods you see that can be turned into something fun! 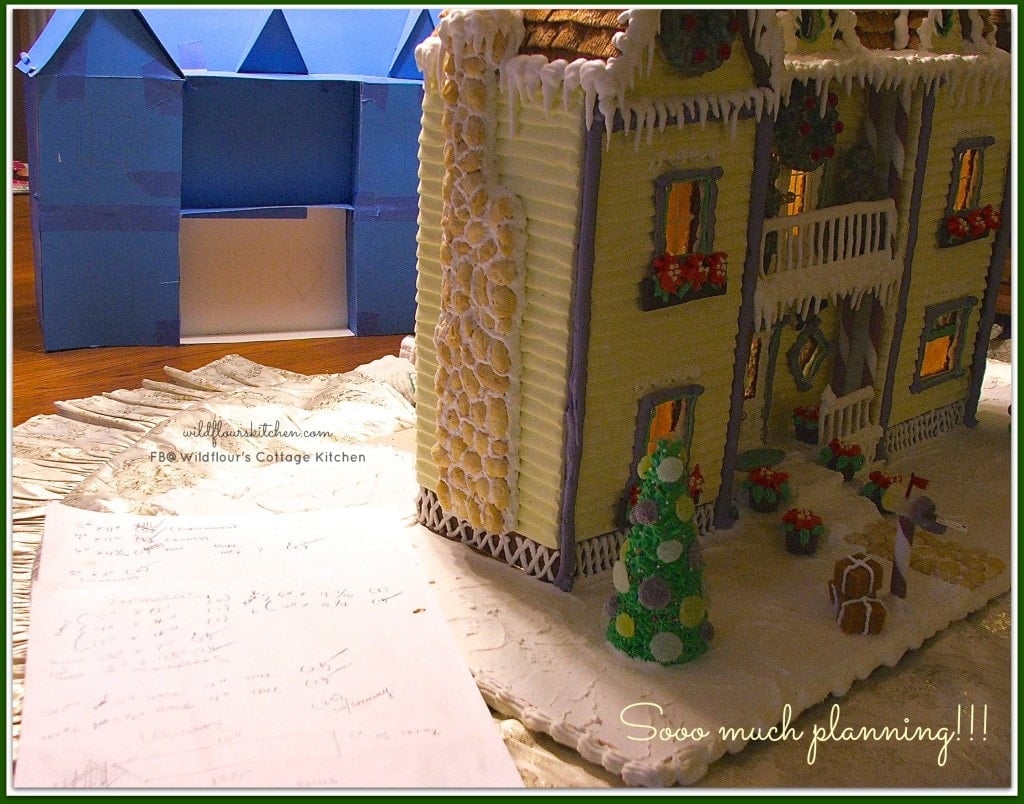 And even the base that it’s going to be sitting on can be free or almost free! You can pick up a scrap piece of plywood at any lumber yard for a dollar or two! Or use an old cookie sheet or even the top of an old table that you have in the attic or garage, or one that someone has thrown out by the curb! Now that’s a sweet upcycle!

So if you’ve always wanted to make a gingerbread house, I say go for it! I really had a blast doing it (with “minimal” temper tantrums and tears), and have plans for another one next year!  It’s going to be even bigger and better than this one and I’m thinking I’m going to start about…August. 😉

I do hope you at least give the cookies a try, though! They’re absolutely delicious and soft inside unlike most! Have a wonderful holiday season and may visions of candies, frostings and sugar plums dance in your heads! 🙂

raisins or any decorations you choose

Scrape dough out of bowl and mound onto a piece of plastic wrap forming into a disk. Wrap tightly and chill.

When chilled, roll out to a 1/3″ thickness or a bit less. Cut into shapes and place onto ungreased baking sheets. Decorate with raisins if desired or bake plain to decorate after baking.

Bake in 375 degree oven for 8-10 minutes. Do not over bake. Remove carefully to wire racks to cool. Decorate to heart’s desire.

*If making pieces for a gingerbread house, cutouts for windows, doors, etc., have to be cut out prior to baking. Crushed hard candies can be added to window cutouts during last 5 minutes to melt. This is best done on sprayed foil to prevent the candy from sticking.

Dough can also be rolled out a bit thinner, but no less than 1/4″ thick. To prevent over browning if rolling thinner, bake at 325 for about 20 minutes. Watch so edges don’t burn.

**The best “glue” to hold all of the pieces together is to use a basic Royal Icing recipe. You could fix your own fireplace with this stuff after it dries! *I used the canister of dried egg whites, and it could not have worked out better! Good luck and have fun!!

this is super cool

Such a beautiful masterpiece!

Thanks, Robin! (A lot of people said they wanted to live in it!!) I guess I should've made it bigger!

Holleee schomolllee! If this is the first, I'm waiting for the next and the next! Just spectacular!! xo

Thanks sweet Ally!!! Yep, this was the first one we made back in 2006! It was a massive project to take on with ZERO experience! Lots of learning went on lemme tell ya!! Ha! But it all finally came together! :D