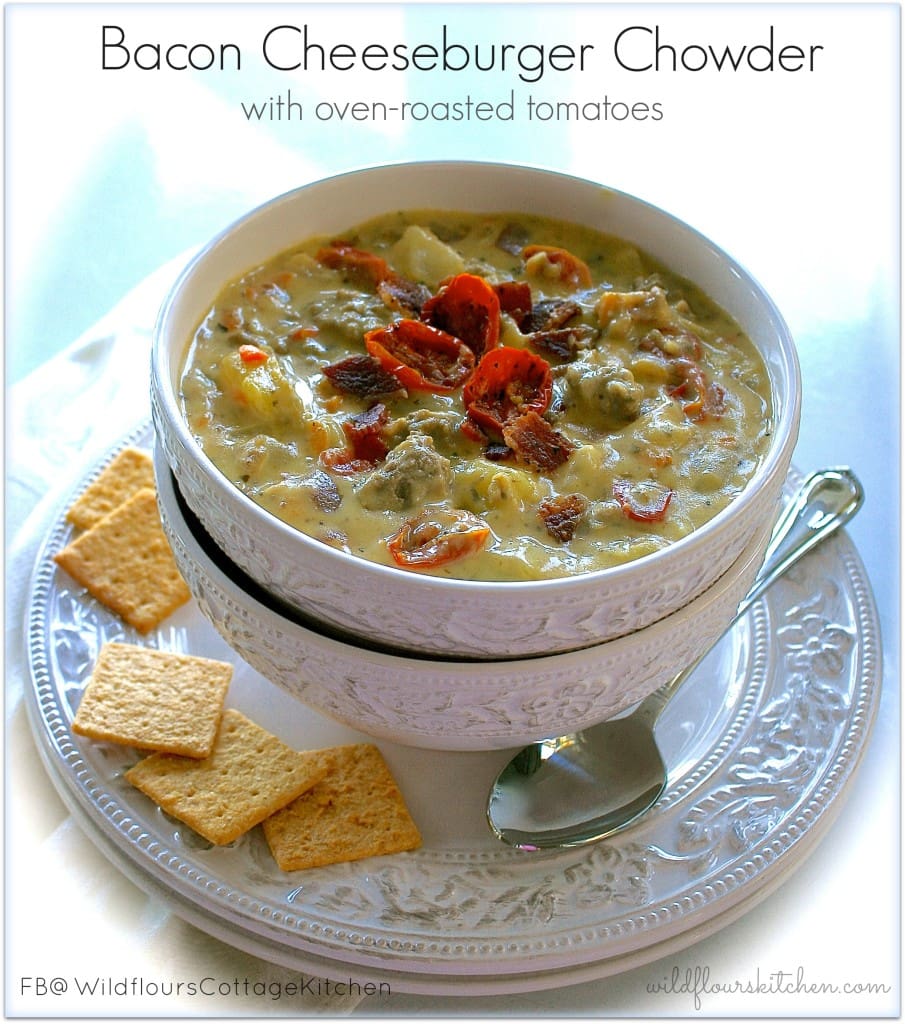 When I think of fall, I think of big pots of soups, stews and chowders slowly simmering on the stove! After a day of laundry, cleaning, yard work and dishes, nothing warms the heart and tummy quite like it! Ever since I was a little girl, I’ve been a cheeseburger lover! I don’t know that I’ve ever met a burger that I didn’t like. Well, aside from some pretty gross fast food chain ones! But I don’t hardly even consider those “real” burgers anyways. Always best to make them homemade! So I decided to take one of my favorites and incorporate it into a piping hot pot of soup! I’ve seen several versions of this advertised at various restaurants, but was always a bit leery of trying it after seeing it. I thought the idea was a good one, but it just needed to be made a bit better. So I finally decided to give it a shot.

First I had to decide what kind of burger we wanted. It was a tough decision between a mushroom swiss and an all-American, but traditional won out…for this pot. But, I definitely see another pot coming in the near future, because this soup rocks! I really wanted to mimic all of the traditional toppings, but didn’t think adding lettuce, as one restaurant did, was a very good idea. So I went with chopped celery and coarsely shredded cabbage and it worked out extremely well. If you just absolutely despise cabbage, you could always add some kale at the very end and simmer until just tender. Then, along with bacon, that was a “gimme”, I added my own oven-roasted tomatoes which absolutely made this soup. The “mayo” ended up being just a small spoon of sour cream and I went with the regular ol’ Velveeta for the “american cheese” which is basically the same thing anyways. Though I had cheddar on hand, I didn’t want to end up with a greasy, stringy mess and wanted the traditional creamy taste instead, and that trusty processed cheese worked beautifully. Then it was just a matter of a couple more veggies, a touch of mustard and a few seasonings, and the end result was a thick and rich, creamy, cheeseburger-like chowder! Serve with some warm, poppyseed breadsticks and you may never want another cheeseburger again! Ok, well maybe no more fast food ones, anyways!

So the next time you get a craving for cheeseburgers, take the time to plan ahead and make a wholesome pot of chowder instead! Much healthier and the kids will love it! Enjoy and have a great day all!

In frying pan, sauté ground beef until no longer pink. Coarse chop as you go. Remove with slotted spoon to paper towel-lined plate to drain well.

In 4-6 quart heavy-bottomed stock pot, Add butter, and next 12 ingredients. Sauté, stirring occasionally, over medium-low heat until tender. About 15-20 minutes.

Add the chicken broth, the potatoes and the cooked ground beef, and bring to a boil. Cover, reduce heat and simmer until potatoes are tender. About 10-15 minutes depending on size and type.

While potatoes are simmering, melt second half stick of butter in a small frying pan and stir in flour. Cook and stir flour over medium-low heat for 5 minutes to cook out the “floury” taste.

When potatoes are done, remove bay leaves and stir in flour/butter mixture. Bring to a nice simmer and cook, stirring occasionally, for 2-3 minutes. Turn heat to low, and stir in cheese, cream or milk, mustard, salt, pepper, garlic powder and bacon pieces until cheese has melted.

Remove from heat and stir in sour cream and chopped oven-roasted tomatoes. Serve hot with sesame or poppyseed breadsticks if desired.