You know it’s fall when the autumn winds start to blow, the leaves start to take flight, and pumpkin recipes start vining full-swing out of the pumpkin patch! One of our all-time favorite pies is pumpkin, (which I actually make all year round!) 😉 If it’s something you love, why not have it whenever you want, right? Why wait all year long to enjoy it only once or twice? They sure didn’t ask me when they made the rules!

But since the holidays are just around the corner, I didn’t want us to tire of it before Thanksgiving even got here, so my pumpkin cheesecake came to mind to make instead!

I was a bit nervous making this though, as I hadn’t made a classic cheesecake in AGES and I was almost out of graham cracker crumbs having about HALF of what I was going to need!

Plus, I used to have the most evil springform pan that always leaked, and even wrapping it in foil was a pathetic solution, it was just horrific. Gawd I hated that stupid pan!

But I now have a much nicer one with a scratch-free glass bottom that really does the job. So it looks like cheesecakes and other springform dishes will be made much more often!

*I did go ahead and wrap it in foil though, due to the butter amount in my crust that’s quite high, and just a bit of the melted butter did leak out into the foil. But just a small amount and no biggie in comparison to half of the batter leaking out with it in the old pan! But definitely wrap your pan with foil before placing it in the bain-marie (water bath).

Though this cheesecake has a ton of cream cheese in it, due to the 5 eggs and sour cream, it isn’t a super hard cake like some New York-style ones. I guess I’d say it’s in between a NY cheesecake and a fluffy-style one.

Much more dense than fluffy and very, very creamy! After trying a bite myself, I’d say it’s downright just about perfect! 😉

I personally could stand to lose one more egg and make it a bit more NY-style, but my hubby absolutely loves it just the way it is!

It doesn’t have a “super cheesy” taste, either. It’s more like, hmmm, a very rich, decadent, creamy pumpkin pie almost! And something you would expect to be served in a nice restaurant.

You know the ones, with real tablecloths instead of paper placemats with a box of cheap, waxy crayons. (Although I do still like to “color”! Shhhh!!) 😉

So, anyways, instead of my usual spiced graham cracker crust, after searching the goodie basket in the pantry, I realized I had gingersnap cookies and pecans! Why not, right? I’ve used cookies and Nilla Wafers for other crusts!

And it turned out to be the perfect match! I’ll never go back to the same-old crust for this one! It truly helped take my cheesecake over the top!

Here’s a pic of my cheesecake after baking, cooling and running a knife all the way around, and being refrigerated overnight. Foil removed and ready to pop open! Always the scary part!!! 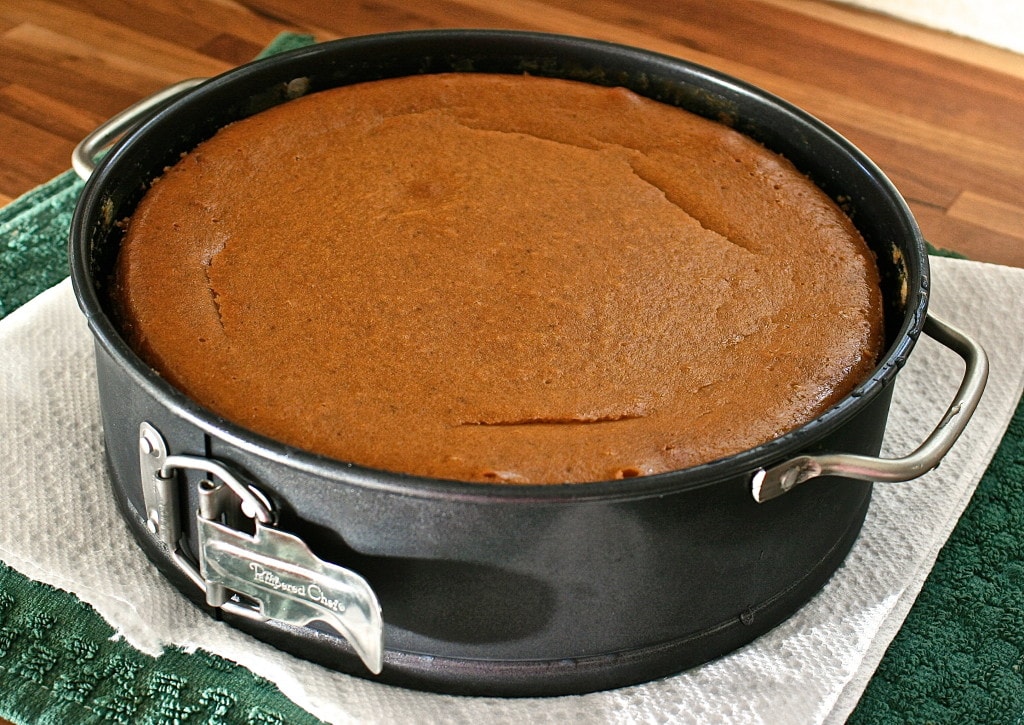 After snapping it open, it released like a DREAM. Nothing stuck at all! Yay!!! Success! And I won’t even need therapy now! 🙂 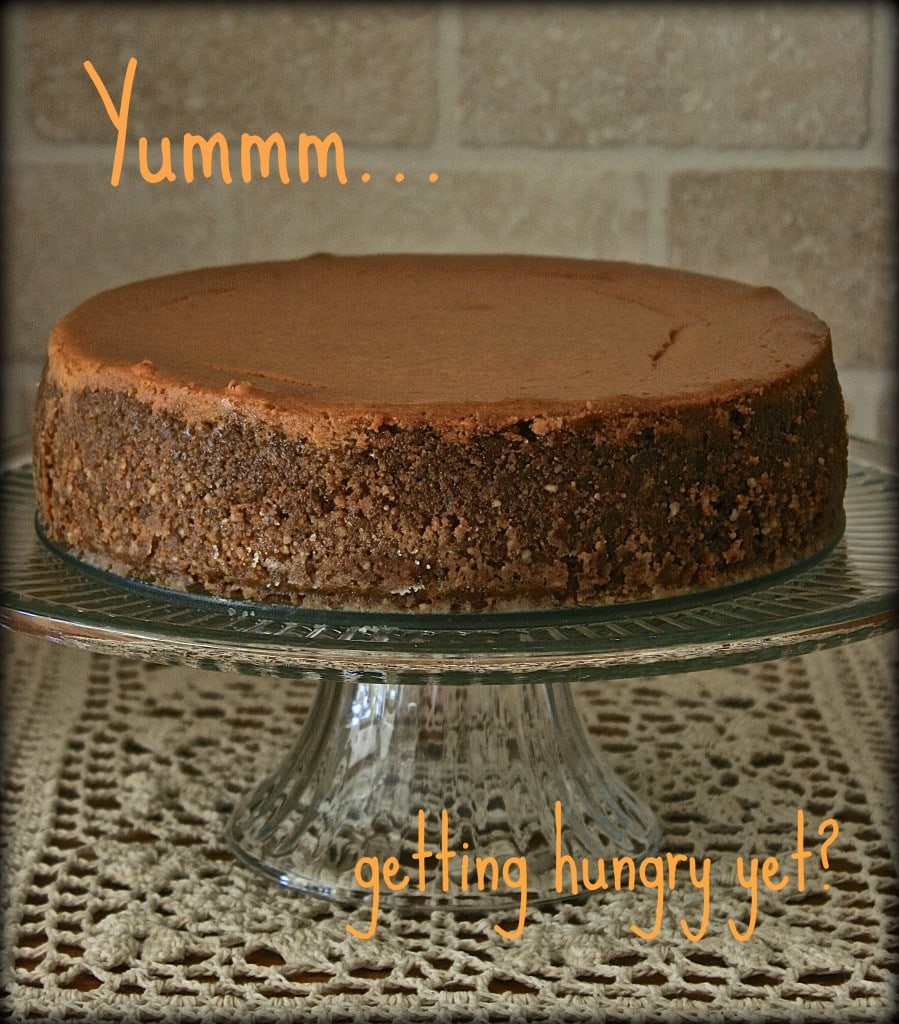 And check out my pretty crust!!

I totally played with my basic recipe, and changed the crust completely from a plain graham crust,  into a spiced pecan and gingersnap crust, that’s about to die for! So much more fun than the graham cracker ones I used to make for this!

I think the only thing it needs is a fork…what do you think?

I served this with whipped cream on top and broken gingersnap cookie pieces and it was truly divine!! Two nice-sized pieces just made their way over to the neighbor’s house, and I’ll surprise our mail lady with a piece in the mailbox, too!

She loves to see that flag up! That almost always means there’s a special treat in there waiting just for her!

What’s the fun of making it if you don’t share, right? The more the merrier, I say!

So print this one out and save it for the upcoming holidays! It will be the first to go on the Halloween Party or Thanksgiving dessert table for sure!

And don’t forget to take along a copy of  the recipe, trust me, people will be begging you to share it!

So enjoy this rich and wonderful autumn treat and be kind and make someone’s day and give a few slices away to those who might just need a smile! 😉 Have a most wonderful fall day all! 🙂

Make sure your rack is in the center of your oven and preheat to 325 degrees.

Brush bottom and sides of a 10″ springform pan with some of the melted butter with a pastry brush. Stir the rest of the butter into the graham, gingersnap and pecan crumbs along with the sugar, cinnamon, nutmeg and salt until well mixed. Press mixture onto the bottom and up the sides of your pan evenly. Pack it tightly. Bake for 15 minutes. Cool on rack. Wrap outside of pan with a nice sheet of heavy foil and place into a roasting pan.

Put a kettle of water onto the stove to boil. Or heat some water in a pot on the stove or a micro-safe pitcher in the microwave.

In large mixer bowl, beat softened cream cheese until smooth. Beat in both sugars until light and fluffy, scraping beater, sides and bottom of bowl to incorporate all of the cream cheese. Beat in sour cream. Add the pumpkin, lightly beaten eggs, vanilla, salt and spices. Beat until combined. Pour batter into the cooled crust that’s in your roasting pan.

Carefully place roaster with foil-wrapped cheesecake into the oven and carefully and slowly pour the boiling hot water into roaster pan coming up cheesecake pan about half way high.

Bake for 1 hour and 45 minutes until the outside of the cheesecake is set, but the center is still loose. Turn off oven, open the door for a few seconds, close it, and leave the cheesecake in the oven for another hour.

Remove from the oven carefully. Remove cheesecake pan from the water bath in the roaster, and place onto a rack to cool. When cool, run a knife around the edges to loosen from sides. Cover and refrigerate overnight, or for at least 8 hours.

Remove cheesecake from fridge. Let set on counter for 30 minutes to take out the chill. Unlock to release springform ring and remove.

To serve, top with whipped cream, broken gingersnap cookie pieces, ground or whole or candied pecan pieces, and a sprinkle of cinnamon if desired.