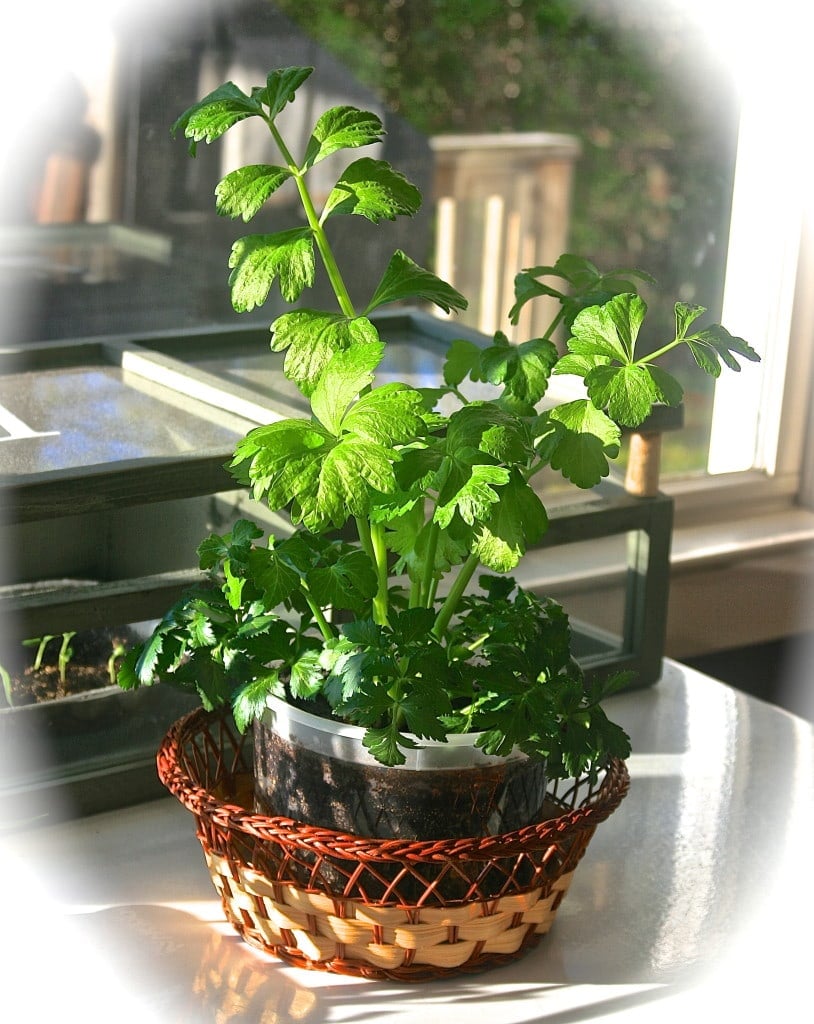 Though I’m really good at using things up before they go bad, there is one thing that always goes to waste. Celery. I try to use it all up I swear, but when you’re cooking for two it’s tough sometimes. On a good week, I’ll use up maybe half of it, and sure enough, months later, I’ll find it on the bottom of the veggie bin all rotten and usually just starting to leak onto the bottom of the bin. I hate that, I hate that more than anything. It’s the one single worst thing to have to clean. Not to mention having to throw the celery out. I don’t need a guilt complex over celery. I read awhile back, that you can actually grow celery from the root end of a store-bought stalk. Well, this I had to try! How simple would it be to just be able to cut what you need?! For once, I was actually excited to buy my next stalk of celery! (*Note to self. Get out more. I’m scaring myself when buying celery becomes “exciting”.) 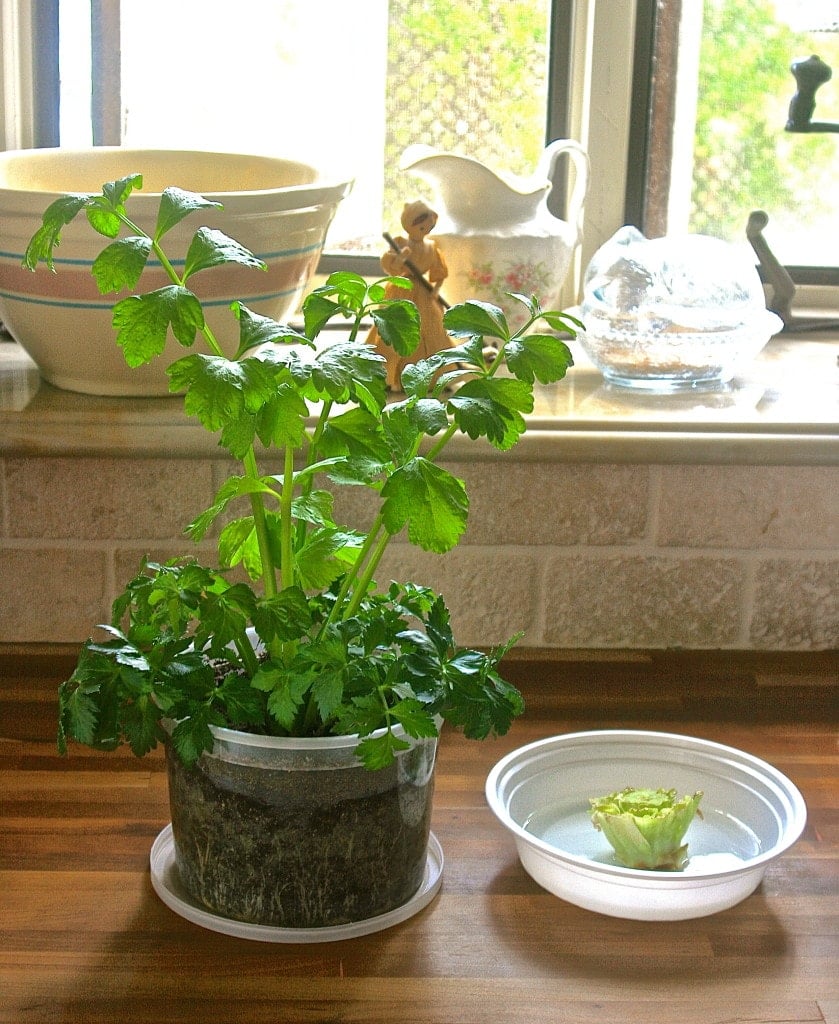 I just took the freshly bought celery, cut off the bottom 2″ from the base, plopped it into a shallow Chinese take-out container, and crossed my fingers! Within the very next morning, I could see little green leaves already poking up out of the middle. I was shocked. It actually worked!! I changed the water faithfully every morning, and how fast it grew was almost scary! You can almost WATCH it grow! After about a month, I finally saw a root coming out of the base. I let the roots get a decent start, then planted it in a 2 qt. ice cream container. I planted the whole 2″ base into the dirt so that the new stalks were level with the surface. Then it REALLY took off. I’m very surprised at the root system. TONS of roots! The photo is about 2 1/2 – 3 months after starting it. And I’d say, it’s ready to be transplanted outside! A must-try at home, folks!

*Note: The starter next to the celery plant is the base of  purple-edged lettuce. Seeing if this will work, too! 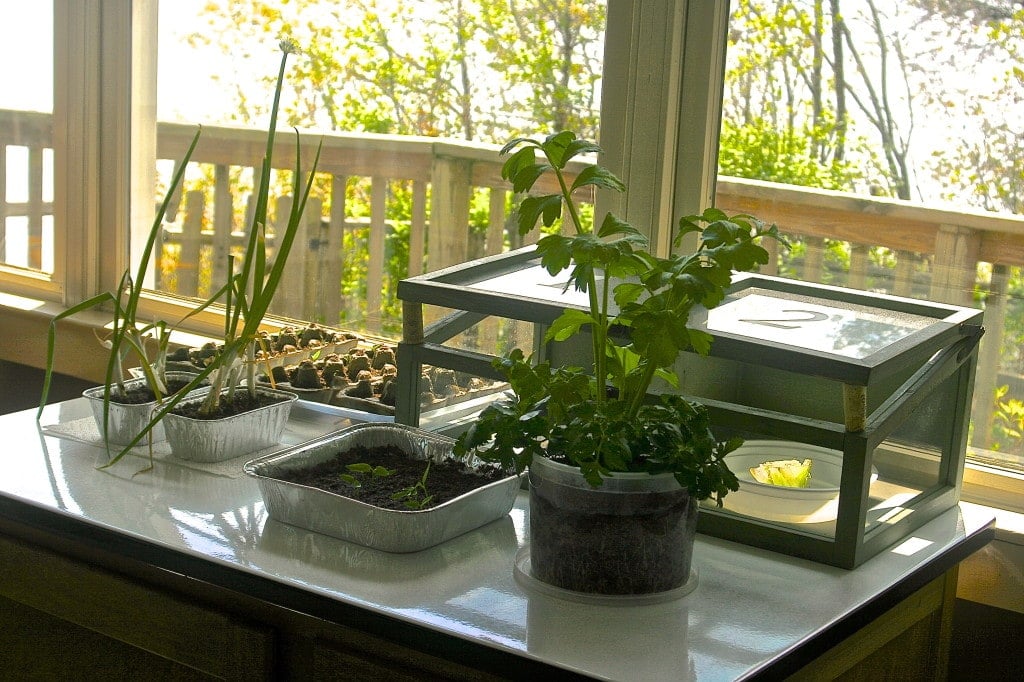 do I have to transplant it outside? can it be a container plant that I just cut stalks off of as I need them? I don't have an outside garden n i rent.. cant dig up the yard.. thanks

You can keep it in a container, but the root system gets really compact. There's a LOT of roots! So if the container is small like the one in my photo, you probably would only get small thin stalks. The larger the container, so I've found, the wider and larger the stalks. But, when it's little like this one, i found that I really enjoyed using the leaves in about everything! From soups, to salads, to sauces, garnishes, you name it! They, too, taste like celery! So every little part is still used! :D Hope that helps! :D

You can do this with romaine too? Oh my do you realize the uglies that get thrown out at the end of the salad week. Hubby and I both hate lettuce when it is not crisp. I am going dig out a romaine now to give it a try. Is it done the same, in water first then in dirt? The celery as well. I have a small amount left on the bottom of the root end so I may as well just plant it. Holy smoley!

Isn't that fantastic? I sure wish I had known about this years ago. I shudder to think of all the lettuce and celery I've wasted. And yep, they say it's best to start it in a dish of shallow water first, then dirt.

I haven't tried celery,but I grown Romaine, Iceberg lettuce and green onions this way. It does work!

Isn't that the neatest thing? I only wish I had learned of this YEARS ago! It would've stopped a lot of tatrums when trying to wedge the dang bin out of the fridge and washing it in the tub! :/ ;)

I think I just might be able to do this. I don't have a green thumb by any means. It certainly is worth a try. Thanks so much for sharing this tip. I think we all have experienced that yucky stuff lingering in the bottom vegetable bin, after awhile..

I don't have a green thumb by any means, but I just might be able to pull this one off. I will keep you posted. Thanks so much for how it is done.

Good morning! You are so very welcome, Rose Mary! I had my doubts about it, but wow did it ever grow fast! *By the time I got it planted, there was a bit of mold in between the old base ribs, but I read that that is normal and that part gets planted anyways. It's such a pretty plant, too, that you could almost keep it indoors! In a bigger pot of course! Good luck with yours and let me know if you have any questions! :)