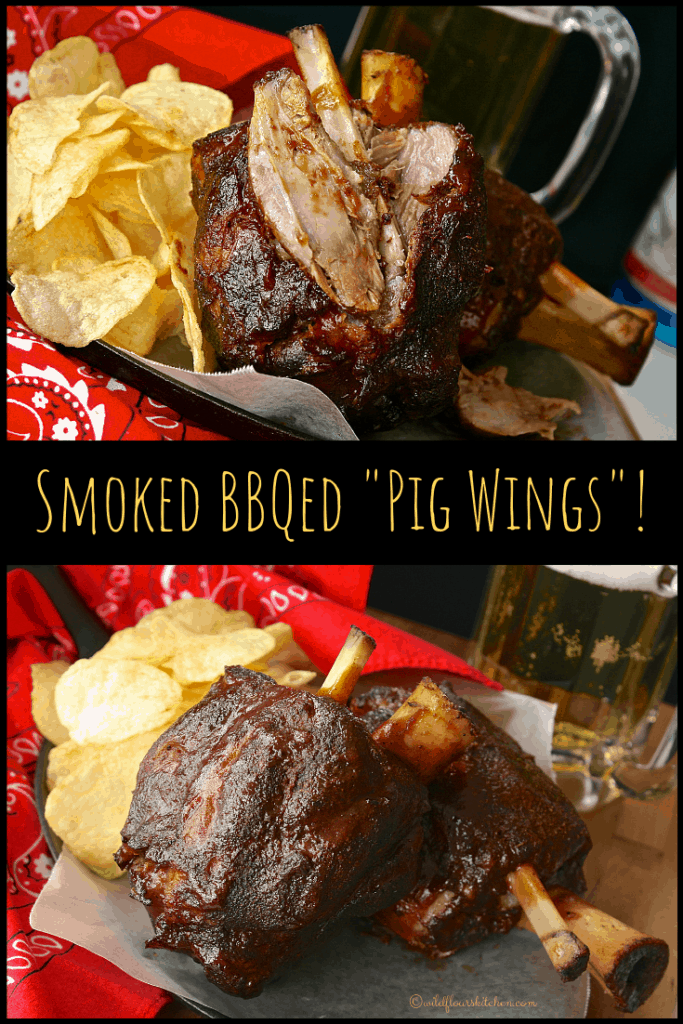 There’s a NEW wing in town that says, Yes! Pigs have finally flown! They’re called “pig wings” and they are about to blow your mind!!

YEP!!! These “pig wings” are just getting started and gaining popularity fast, and there’s a very good reason why. They’re AWESOME!!!!!

Restaurants are starting to sell them during seasonal sporting events, and backyard barbecuers are discovering that they’re actually not so hard to make, and are like Pork on a Stick, or recently more popularly called, “Pig Wings”!!

The rich pork meat is tender and juicy, and just as tasty as ribs! Except there’s a whole lot more meat on them!!

These babies, before trimming and cooking, weighed ONE AND A HALF POUNDS EACH!!

So, are you excited to learn how to make these, or what?!!!

And don’t worry, there’s really nothin’ to ’em!! I’ll show you everything you need to know and do, and you’ll be a pro at it from the very first try! If I can wing it, so can YOU!! 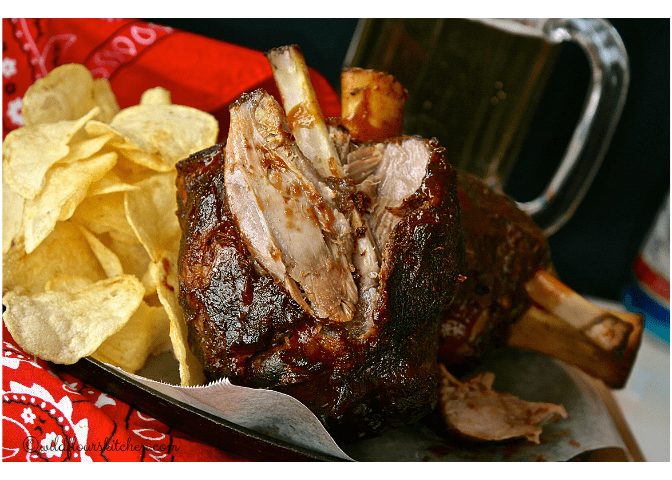 I saw a famous restaurant advertise making them, and I had to investigate these new “pig wings” IMMEDIATELY. And after a bit of researching, I found that all they really are, are pork shanks. The cut more commonly called “osso bucco “.  I’m sure that some light has now been shed on the mystery of them already!

Well, when I asked for “pig wings” to the meat department manager at our local grocery store, he pretty much had no clue at first. But as soon as “pork shanks” were mentioned, he was a good sport, and offered to try and order some for us. And THIS, to ALL of our surprise, was what he got us! 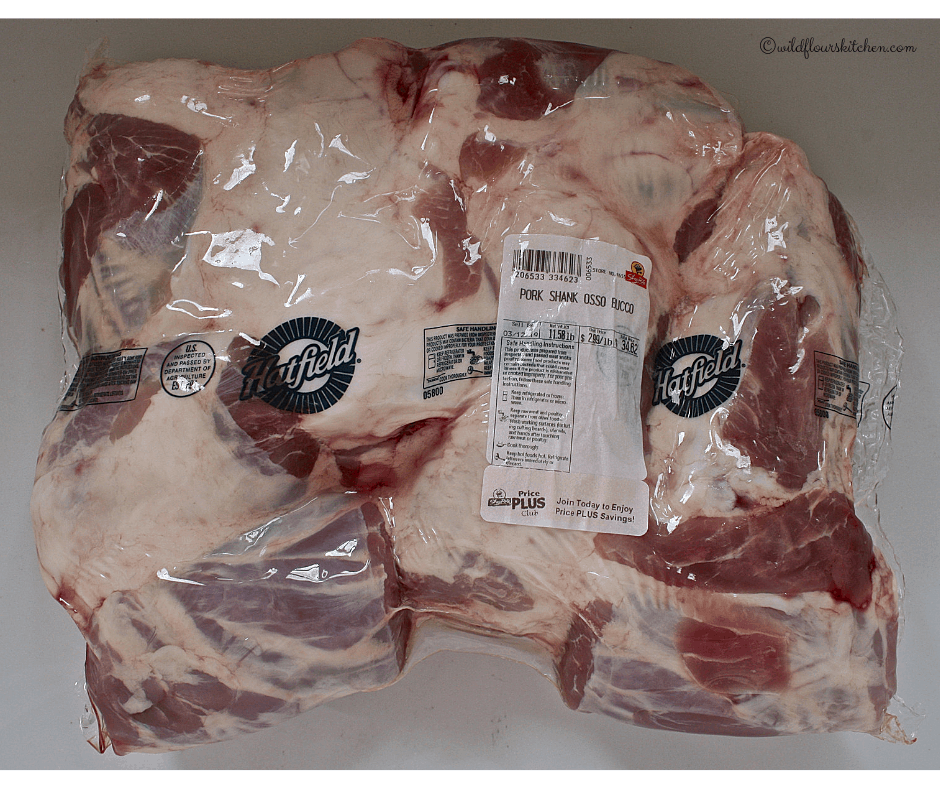 When my hubby picked them up and brought them home, I knew that for one, they were going to need to be trimmed of all that fat. (These obviously arrived untrimmed, but you may be able to find them already trimmed.) 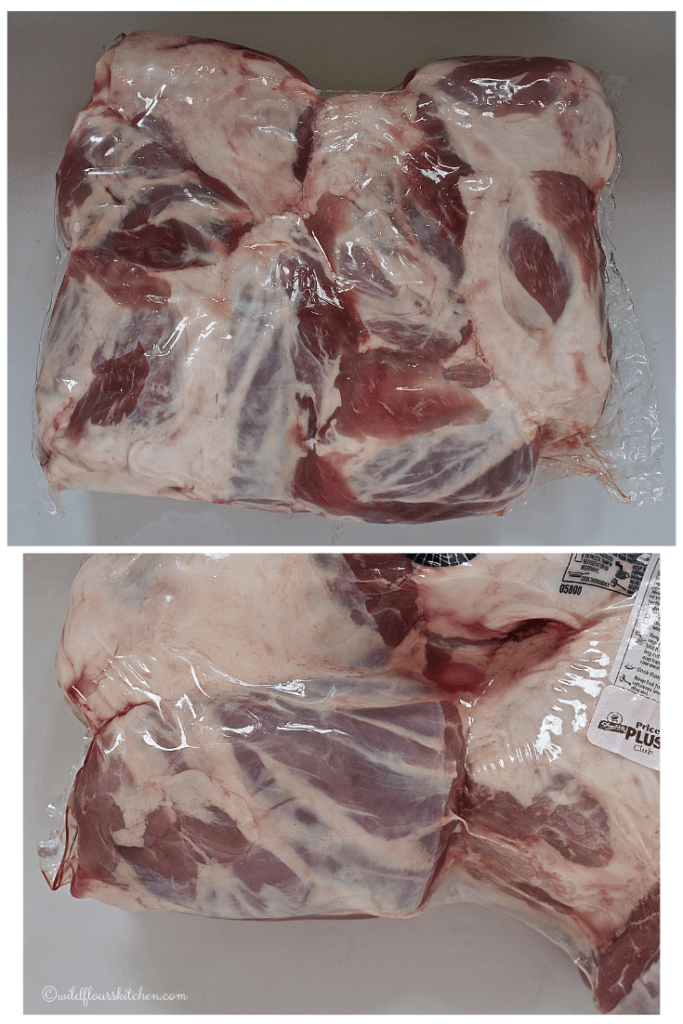 Removing the excess “unwanteds” was actually easily done. But my main worry, was that very thin skin that I couldn’t get off.

I was afraid that it was going to be similar to “silver skin” and be very tough. Not only that, but not allow any flavorings from the seasonings to penetrate through it.

Had that been the case. Game over. It would’ve been a DISASTER.

But I am THRILLED, over the MOON thrilled, to let you all know that, that paper thin skin, doesn’t have to be removed. WHEW!!! What. A. RELIEF.

So let’s rock right on through this, shall we?!!!!

FIRSTLY, trim ALL that excess fat off. ALL of it.

Unless they come to you already trimmed, they’ll look like this when you’re done. 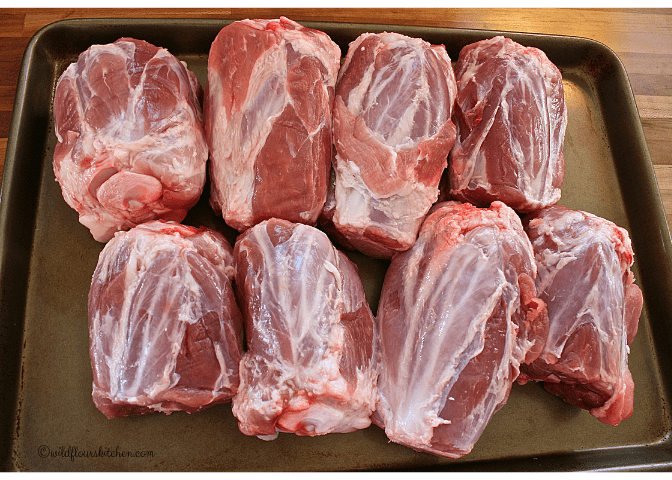 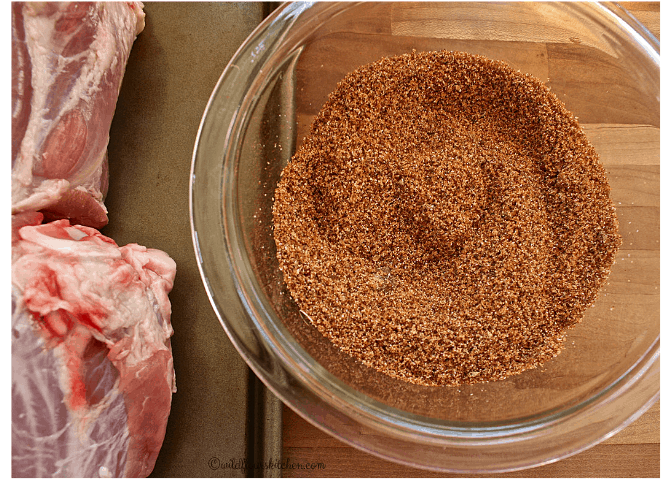 Coat them well on all sides and place them onto the racks that are going into your smoker. *I place the racks over baking sheets to avoid any mess on the counter! 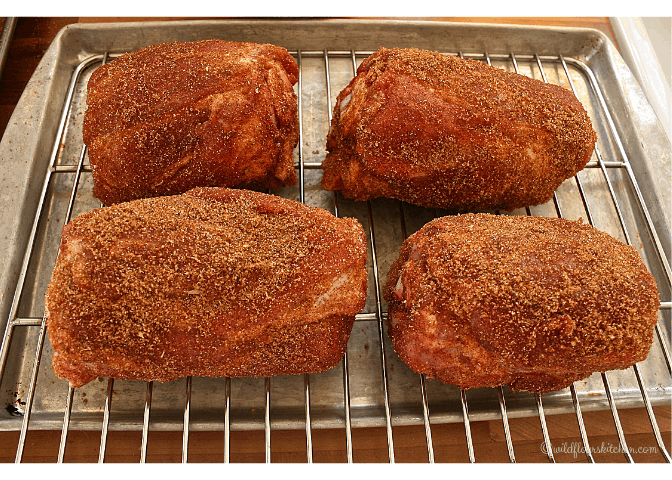 And be mindful of how you want to be able to put them into the smoker quickly. I left the overhang be the part that I needed to grab to place it into there! 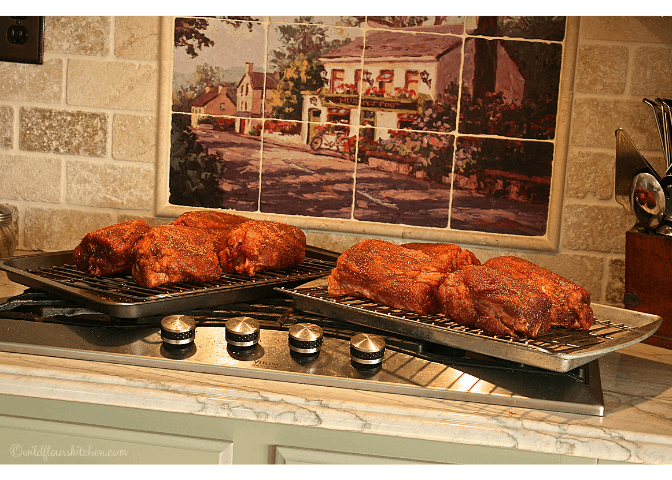 I took this shot just to show you how BIG these suckers were!!!  OMG…right?!!! 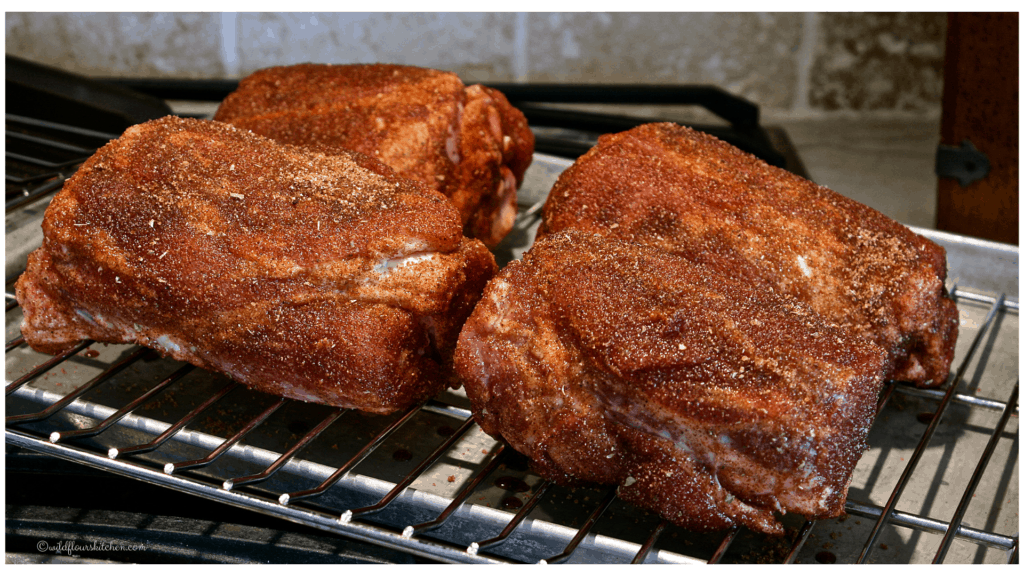 And DO NOT put them into whatever smoker you’re using until you see a good amount of smoke coming out! 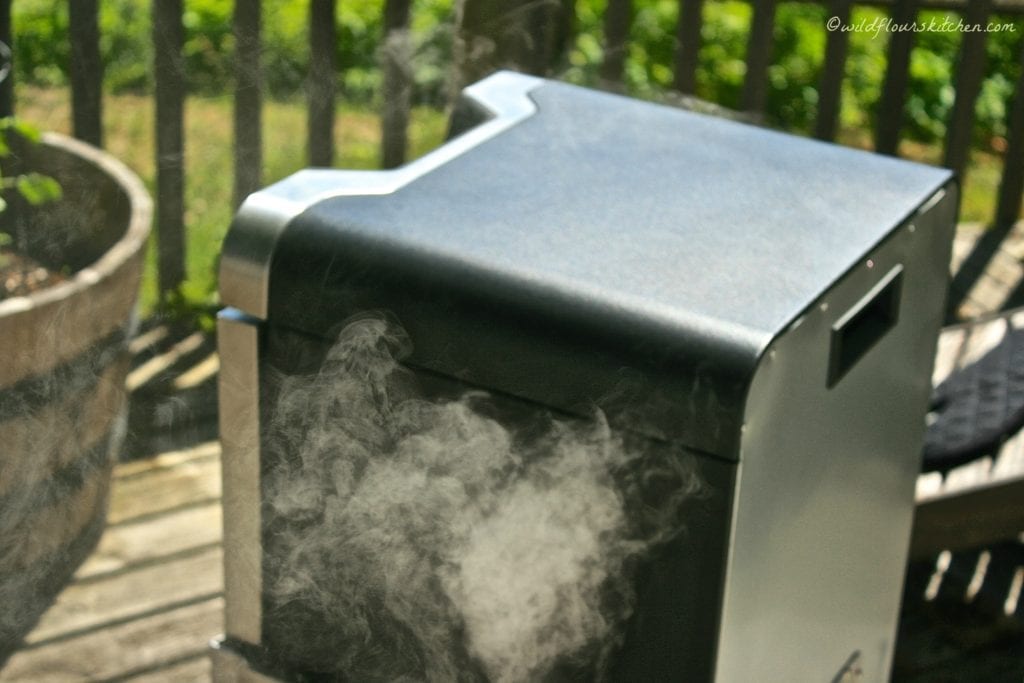 After 3 hours in the smoker, they were already driving us CRAZY!!!! They smelled SO GOOD!! You could smell them all throughout the ENTIRE HOUSE! 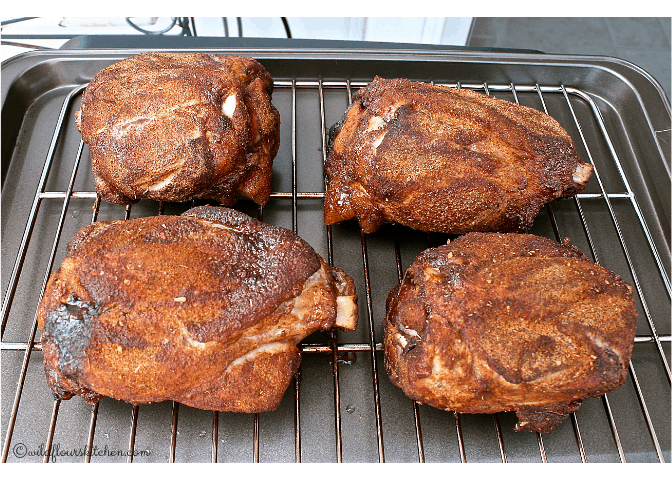 Okay, so, after the 3 hours, tear off three LARGE sheets of foil. When I say large, I mean the commercial-sized. If you have regular large-sized from the grocery store, you’ll need to divide them into more “packages”. Fewer wings per packages of foil.

OR, you can place half or all into an aluminum foil, small or large, roaster pan, and then just cover the top with foil, sealing well, so that no steam escapes.

Either way will work. The whole point and idea of this, is to enclose them so that their own steam will tenderize them.

So, place them into whatever you’re using, and add a little beer. (*Beer has natural enzymes that help break down tough cuts of meat and make them melt-in-your-mouth tender!! And the end product will NOT taste like beer.)

*It will also no longer contain any alcohol, so it’s safe for all to enjoy. 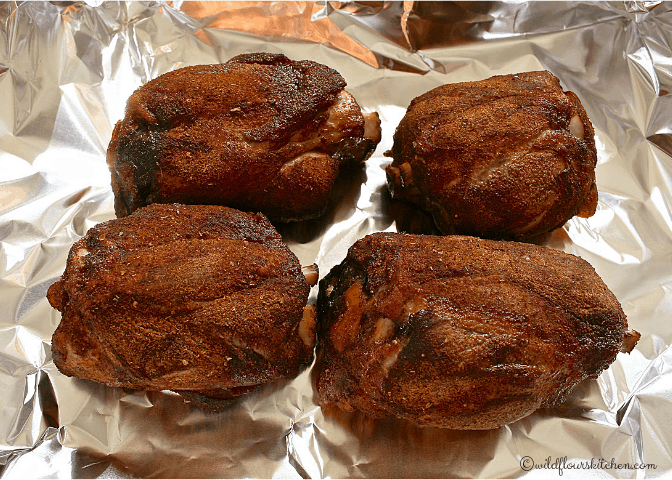 Then pop them back into the smoker! It’s ok if you’ve used up all of your smoke. You really only get a smoke flavor from the first several hours, and after wrapping them in foil, it’s just a silly waste. 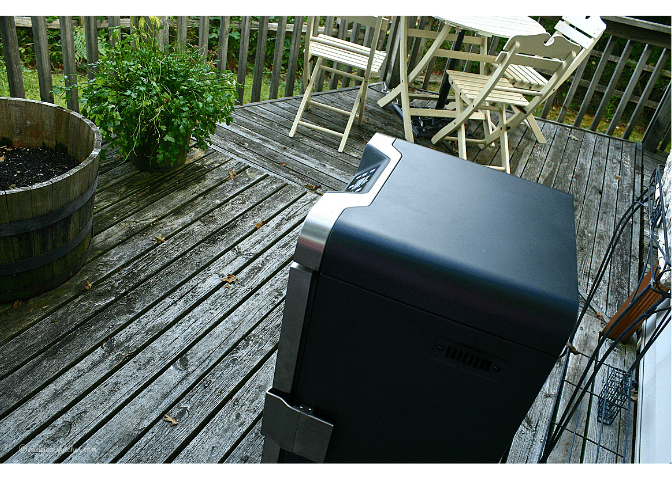 If yours are as large as ours were, and the bones as thickly covered with meat, you’ll need to cook them another 3 hours. If yours are a bit smaller, 2 1/2 hours might be enough.

Just take note of how much ours weighed (before trimming).

Once the second phase of cooking is done, remove them from their foil packages, and have ready what ever barbecue sauce concoction makes you smile!

I did a nice mixture of 3 products that I love, and it REALLY worked out beautifully!! The flavor was just what I wanted!

(But you can dress them with your own favorite sauce or sauces.) 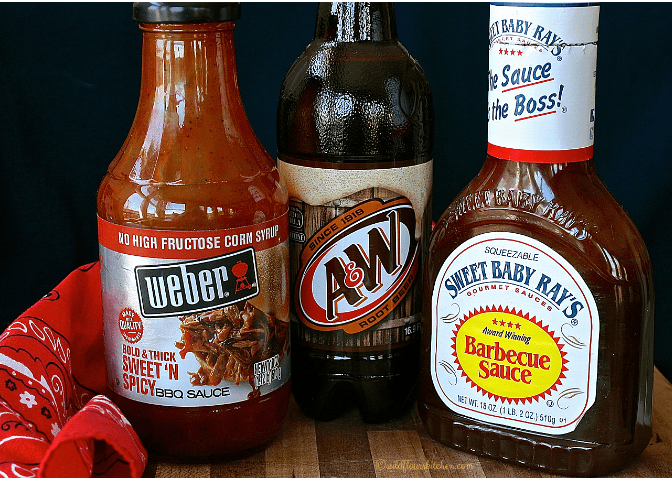 I used some of the foil that they had cooked in, so that there wasn’t a lot of waste, and placed it on the racks. Then placed the basted ribs onto that. 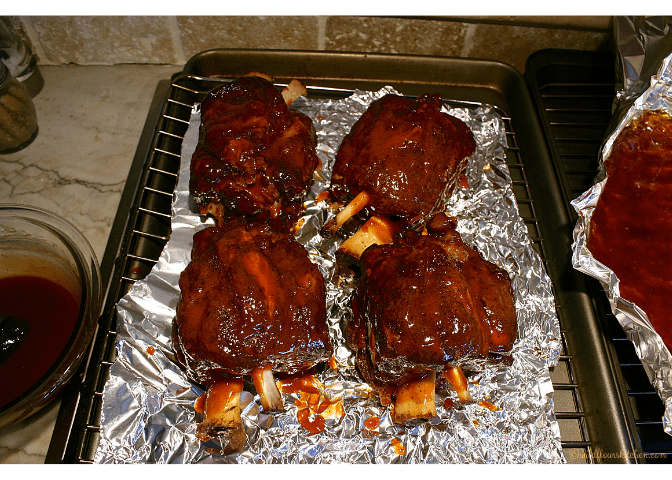 Look how wonderful they already look!!!! (By this time, my hubby was about to LOSE it from all of the wonderful aromas that had been wafting through the house for HOURS now!!!) 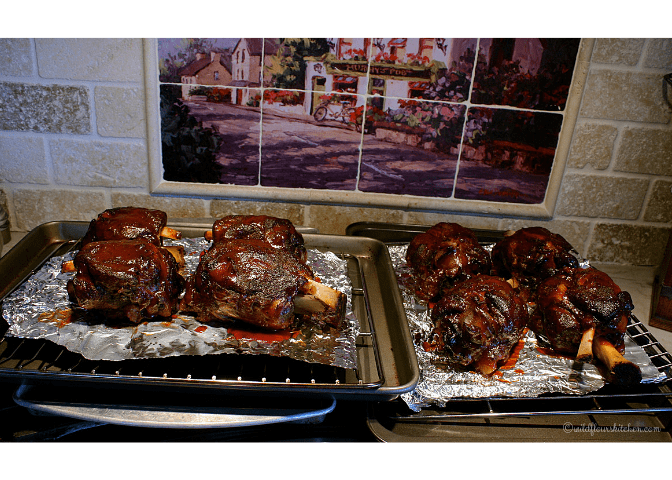 Those are TWO RACKS of soon to be HEAVEN!!!! 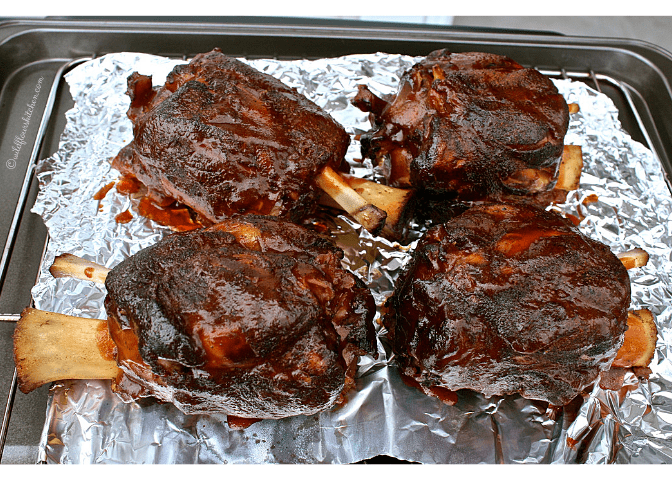 Then just pop each rack of pig wings right back into the smoker…. 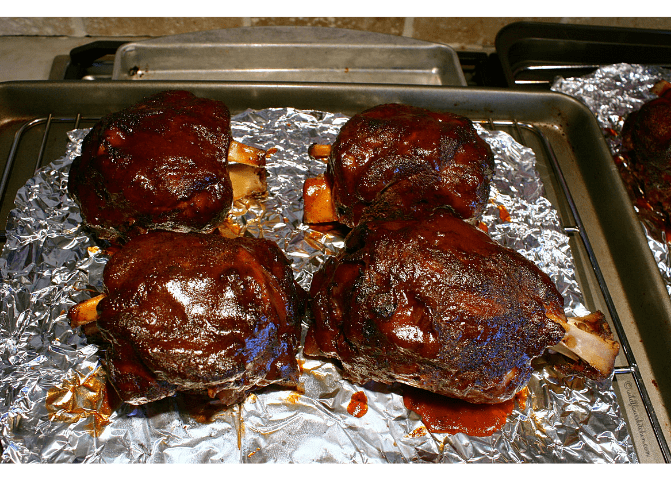 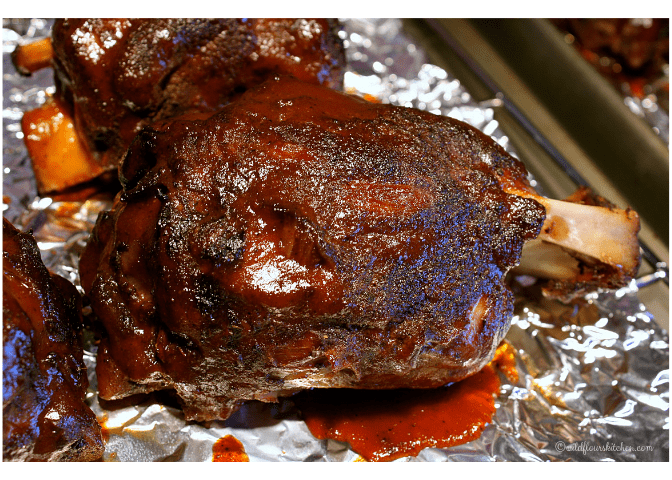 All you want to do at this point, is to just set the sauce. 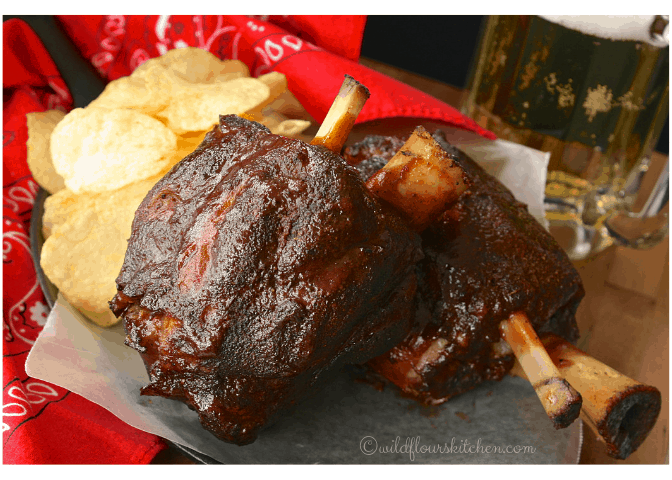 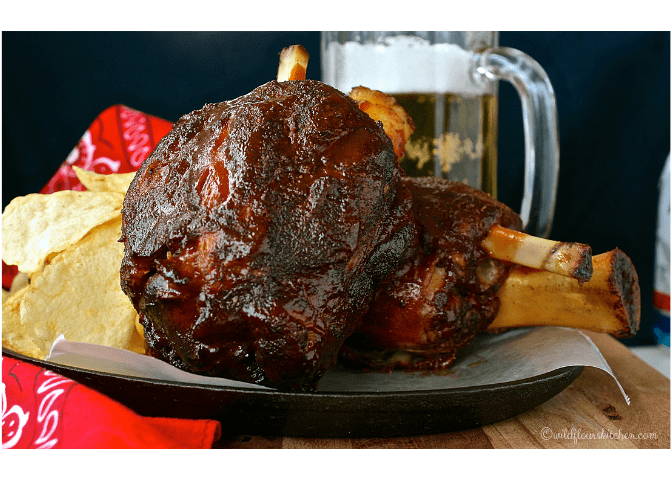 SOOOOOOO stinkin’ tender that the meat, with a gentle tug, pulls CLEAN from the bone! 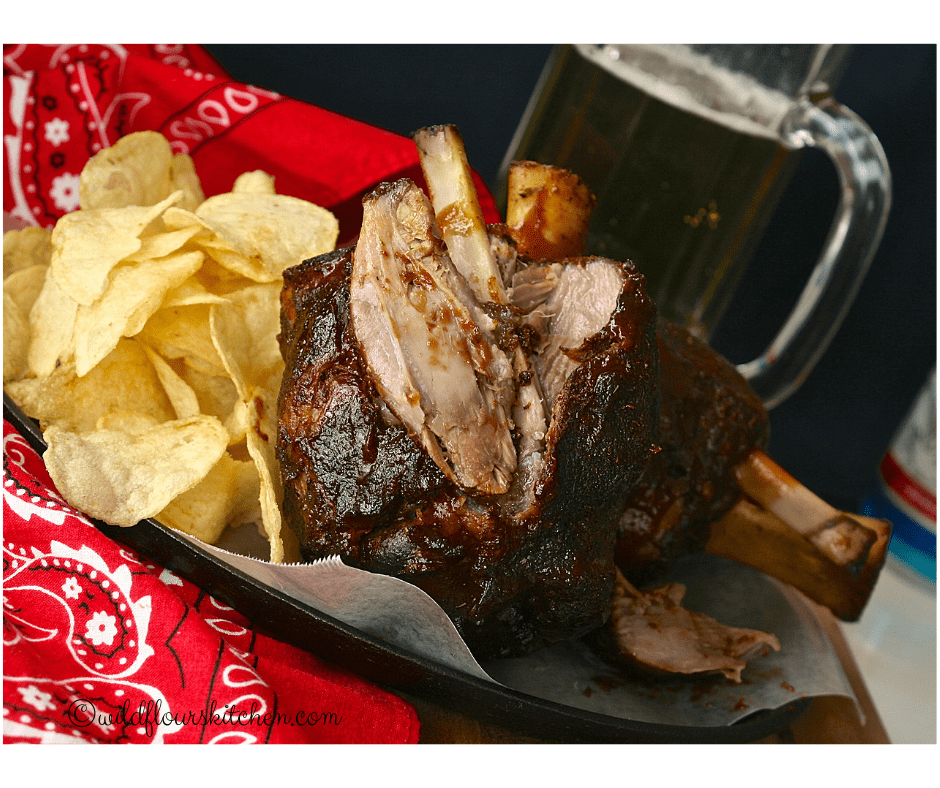 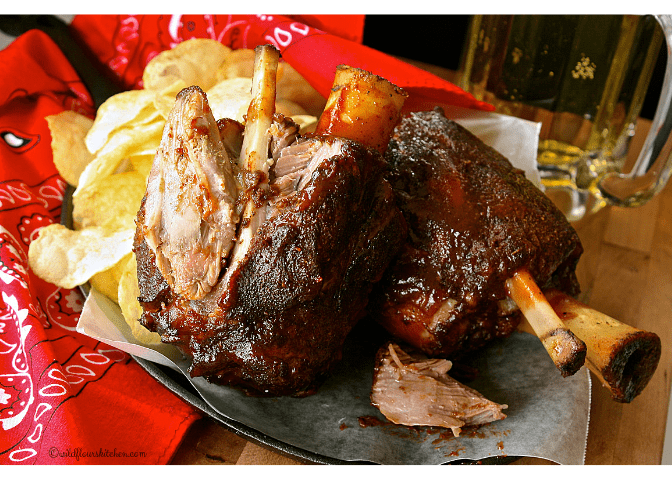 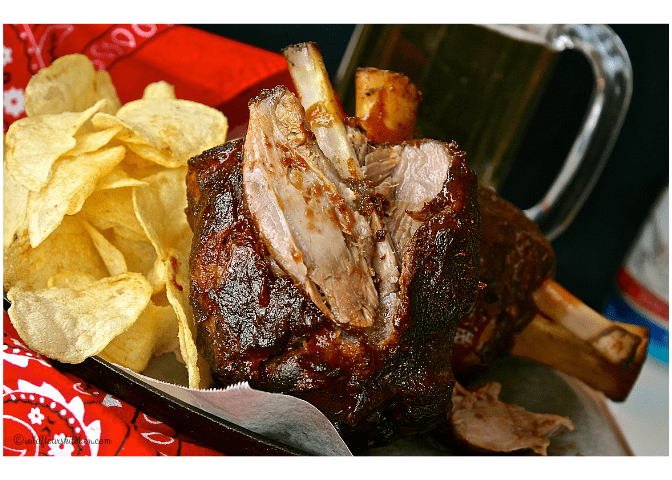 And since there was just a BOATLOAD of meat, on EACH of them, I only simply served them with a handful of salt & vinegar potato chips.

So, if you’re looking for a SLAM DUNK meal or killer appetizer, jurassic-sized, to WOW all of your friends and family, SERIOUSLY, THIS. IS IT!!

Ribs, schmibs. Brisket, okay, whatever. Been there done it, ate it.

But when you make “pig wings”, you’re going to knock their boots off!! (Not that EVERYTHING barbecued and smoked isn’t my favorite. I live and die by my grills and smoker!) But this is something new that just WOWS even by the LOOKS of them!!

So, GO FOR IT!! And make my “Slow-Smoked Root Beer Barbecued Pig Wings” the first thing you make when you dust off your smokers and grills this season!

A HUNK of tender, juicy, smoked pork slathered with barbecue sauce on a “stick”. I mean, what could kick off grilling season better than these, right?

Preheat smoker with wood chips (and fill water pan if needed) according to the manufacturers directions of your smoker or grill.

When smoker is fully heated to 225º and smoking, add grates of wings. (*These will cook during phase one for a total of 3 hours.)

While wings are cooking, add bbq sauce ingredients into a small bowl. Whisk to mix. Set aside.

After the full 3 hours, remove half of wings and place onto an extra large sheet of foil with all the sides pulled up a little to cradle them. Pour a 1/2 cup light beer into the foil cradle and seal closed. Repeat with other half of wings. Gather longs up together, roll down, sealing. Roll up ends.

Place back into smoker and continue to cook for another 2 1/2 - 3 hours depending on size and thickness of meat. (*I did mine for 3 hours because of their enormous size.)

After the second cooking, remove them from the foil carefully, coat both sides well with the barbecue sauce, place back onto racks and return to the smoker, and smoke until the sauce is set. About another 15 minutes. Do not overcook.

*If you don't have commercial-sized foil, simply place all or half of them into foil pans, add the beer, and cover them tightly with sheets of foil so that no steam escapes. You can do this all in one pan if your smoker is large enough.