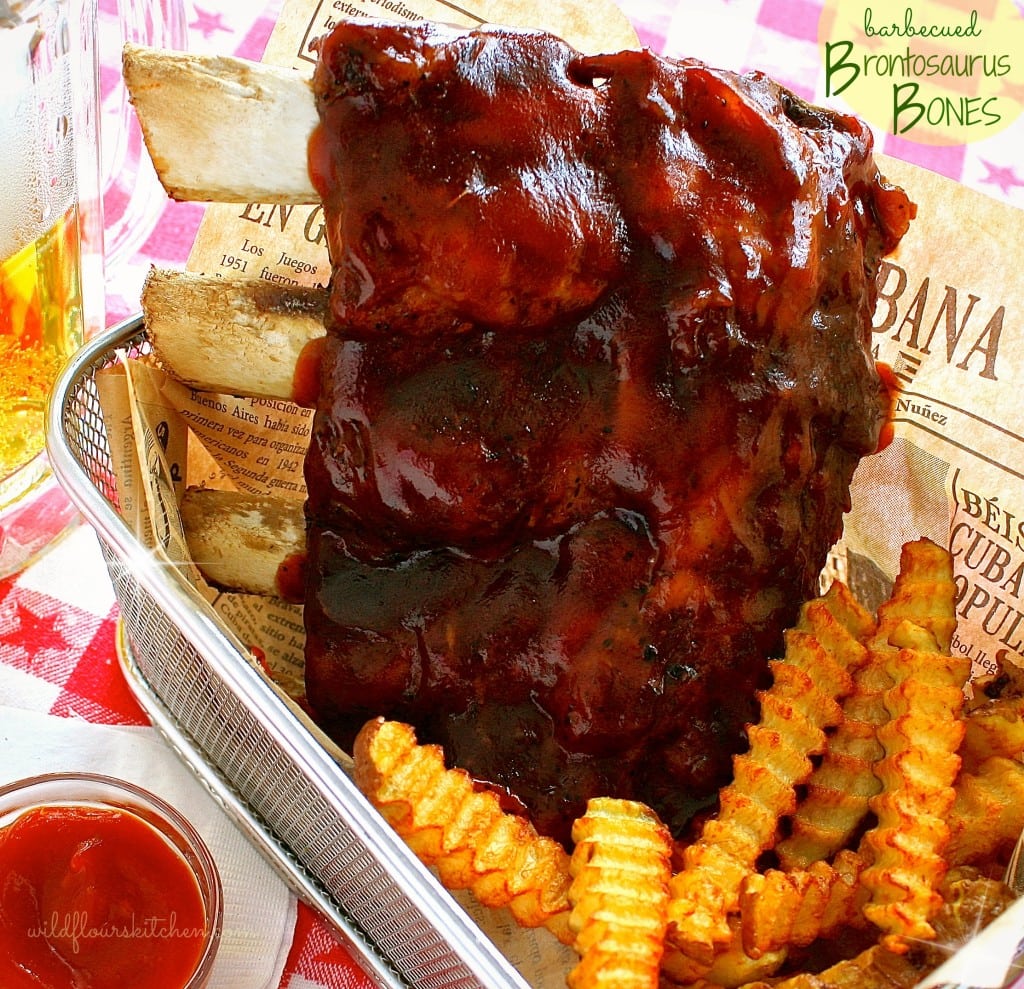 “Wiiiiiiiilmaaaaa!”!  😀 I can just hear the beloved cartoon character, “Fred Flintstone”, calling to his wife, “Wilma”, for a plateful of these barbecued Brontosaurus Bones!

When I was a girl, I LOVED that show!

When it first aired, it was the number one prime-time show on television! And the first cartoon to ever air during prime-time, too, first airing in 1960 before I was even born! But the reruns have been played more times than I could ever count in 1,000 lifetimes and I think I’ve about seen them all at least 5 times! I still enjoy catching an episode now and then. 😉

So The Flintstones, (and their neighbors, the “Rubbles”), were my inspiration for these incredibly tender, mammoth-sized, “bronto bones” for short, slathered with a nice coating of sweet, sticky barbecue sauce!

When there’s a special occasion, usually for a business dinner, Valentine’s Day, birthday or New Year’s Eve, we always order a large prime rib from our butcher. But when I cook it and serve it, I prefer to serve it boneless.

Our butcher will trim off the bones for us, but we still have to pay for them and he wraps them separately. So what to do with the bones, right? Though they never look like it before they’re cooked, they’re actually very meaty! A lot of people boil them down for stock, but to me, that just sounds like such a waste of expensive prime rib beef!

I thought about roasting them, but was afraid they’d just kind of dry out and the meat would shrivel up and be tough. I didn’t really want to stew or braise them, either…but I did want the meat to completely be able to fall off of the bones to be able to actually eat and enjoy every morsel. Soooooo, into the pressure cooker they went!

Best decision I could’ve made! They turned out AMAZING! HOLY BEDROCK, Fred!

The meat fell away from the bones completely when gently pulled, and not a single, teeny, shred of meat could be found on them!

Every last melt-in-your-mouth tender, juicy, and succulent bite was immensely enjoyed! And I’m sure “Fred Flintstone” would’ve loved these, too! 😉 “Yabba-dabba-DOO!” 😀

If I owned a pub, I could see people lining up for these on Sports Day Sunday!

And I’m betting that grocery stores, after holidays, have them in the back for pennies a pound to get rid of them! What a nice profit these babies could rake in! 😉

Don’t let this little secret out though, or you know what will happen! The price for the bones by themselves will skyrocket the same way chicken wings did.

I’ve heard that in some areas, stores are gouging customers for 6-8 dollars a pound for skimpy chicken wings!! (For “pieces parts” that used to get thrown out or….you guessed it…used for stock.)

So if you happen to have a store that sells the bones from prime rib roasts after special events for a fraction of the original price, pick them up! Or ask for them…but if asked what you’re going to be making, best to just say they’re for stock. 😉 Our secret! 😉

1 rounded tsp. honey, can also use molasses if preferred

Remove silver skin from back of ribs if still on. Season both sides with dry seasonings. Set aside.

Heat water to boiling and stir in beef base until dissolved.

Pour into pressure cooker pot. Add ribs meaty side-up, back side down. *If tall just lean against side. Turn on stove to medium heat.

Place on lid with rubber gasket in place, place on regulator. Let pressure build until regulator starts to rock. Once rocking, lower heat to a nice, steady rock and set timer for 20 minutes.

When time is up, turn off heat and move cooker to a cool spot on the stove. Let pressure drop on it’s own accord. This only takes about 15-20 minutes. When safe to open, remove rack to baking sheet lined with foil. *While cooker is cooling, preheat oven to 250 degrees.

Heat barbecue sauce and honey in a small bowl in the microwave, coat ribs on both sides, and bake in low oven for about 10 minutes to set sauce.

Serve with lots of napkins and homemade fries if desired.

*If wanting to cut them up, cut them after cooking but before adding barbecue sauce.

You will be shocked at how much meat is really on these! Enjoy!!

G'day! Sign my up for some Kelly! YUM! Thanks for the link back and badge! GREATLY appreciate! Thanks for sharing it at the Foodie Friends Friday #Foods That Make You Smile Party! Cheers! Joanne

Oh man, my boys would gobble these up! Thanks for sharing at Simple Supper Tuesday.